So while all of his friends (more so enemies) set their sights on the prestigious UA High School, an intense school dedicated to raising heroes, Deku continues his menial routine of taking abundant notes on local big-shot heroes and especially eyeing his idol – The almighty All Might!!! (Yes, the exclamation points are necessary).

Flash forward past the months of rigorous training and it’s enrollment time – and Deku is intent on making the student roster. Not surprised to see his rival sitting at the back of the classroom, Deku’s new life full of new friendships and hardships begins. And through his academia, he will learn both the harsh realities  and unmistakable joy that come with being a true hero. 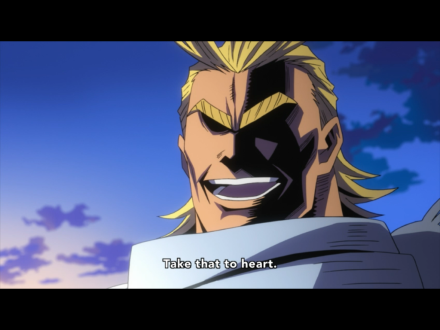 I like My Hero Academia. There’s not much else to be said that hasn’t been already. It’s a show about growing up, one of those feel-good anime that make you want to run out and punch a guy in the face after watching just because you swallowed your cat’s hair. But seriously, we’ve had more development with Deku and his two classmates than we’ve had with all of the characters in this season’s The Lost Village combined – and there are over 30 of those guys!

Deku is a kid with a big heart for heroes, and I wish I could say that about most people. Even though he’s been quirk less since birth, his dreams are still set on UA and All Might, and while it was shattering to see that flashback of him finding out, I think that is what has made him such a loveable guy. Being of humble origins, obtaining powers from a supernatural source, and faced with challenges every day, every hour of the day, Deku practically had the hero formula drilled in him – And he knows it, too! 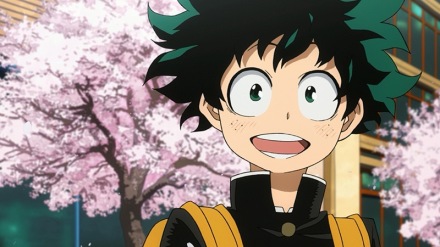 That development is nothing fresh, however, considering that it’s the same underdog story we all wish to resonate with. It’s managed to keep me invested thus far, and I’m daring to call it out as best anime of the season already just because of how straightforward and honest these first five episodes have been.

It helps that the animation is bright, active, and uncensored in the body fluids department . . . I’m talking about blood, sweat, tears, and snot, of course. The action scenes with All Might are particularly empowering. It’s saddening to see him shrink to his normal scrawny human physique after being buff and superior. I hope the anime carries that torch straight through to the end, just like Deku is so far.

Full of colorful action, comedy, super powers, and likable characters, My Hero Academia is a comic book come to life by THE studio Bones being Bones again. If you’re not already heading to class each week with it, what’s going on? Add this anime to your schedule!