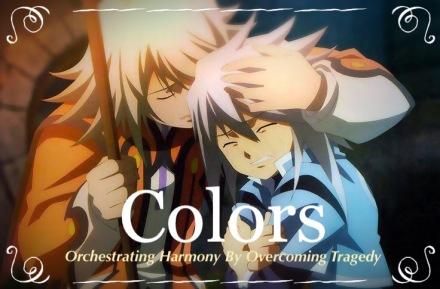 Chances are that if you were linked here from another blogger pal, then you might be new. To those first-timers, “Hi, I’m Takuto, welcome to my anime cafe!” As part of the OWLS blog tour’s  fourth monthly topic, “Colors,” I decided hit up a show that originates from a GameCube JRPG—the one and only Tales of Symphonia which was, fun fact, the SECOND anime I had ever watched!! You know what that means—aww yeah, old-school Takuto wrote a dope review about it (here) years ago that is littered with grammatical errors but full of heart. It currently has zero comments and likes, so go mess that up for me, will ya? Be gentle 🙂

We are all part of one race, the human race. “Colors” refers to people of color in anime. For this month’s topic, we will be discussing how people of color or
characters of different “races” (could be a literal alien race) are represented in anime. Some topics we are considering is the dangers of stereotyping, bi-racial
characters, and the importance of racial inclusion.

I had the recent pleasure of finally finishing the Tales of Symphonia PS3 game recently, so I’m excited let the experience come full circle by revisiting one of the titles that got me into anime. Thanks Lyn for the prompt!

A brief discussion on the various races and factions that appear in the 2007-2012 11-episode OVA series “Tales of Symphonia: The Animation,” based off the GameCube game by the same name, created by Bandai-Namco, produced by Ufotable, directed by Haruo Sotozaki (“Tales of Zestiria”). SPOILER WARNING

When One World Flourishes, the Other Withers

Enter Sylvarant, a fantasy world of monsters yet very little magic. Why? The mana that flows through the realm has been draining out for a long time now, and it seems that the land will only grow drier (literally) with each passing day. Little to the peoples’ knowledge, a second world exists out there, one that mirrors their own home, and the reason it prospers and thrives is because the mana flow resembles that of an hourglass, Tethe’alla, this second world, residing on the bottom.

This is where the Chosen one comes to save the day! “Chosen” by the heavens, Colette Brunel of Sylvarant sets out on her quest of World Regeneration to flip the hourglass back in their favor. But her clumsiness and well-being worry her friends Lloyd Irving and Genis Sage. So the two, along with Genis’s older sister Raine (who happens to be their village’s teacher) and a mysterious mercenary named Kratos, embark on a journey, encountering new friends and more foes with their own philosophies that will forever shake the foundations of their precious world that they’ve studied for so long. 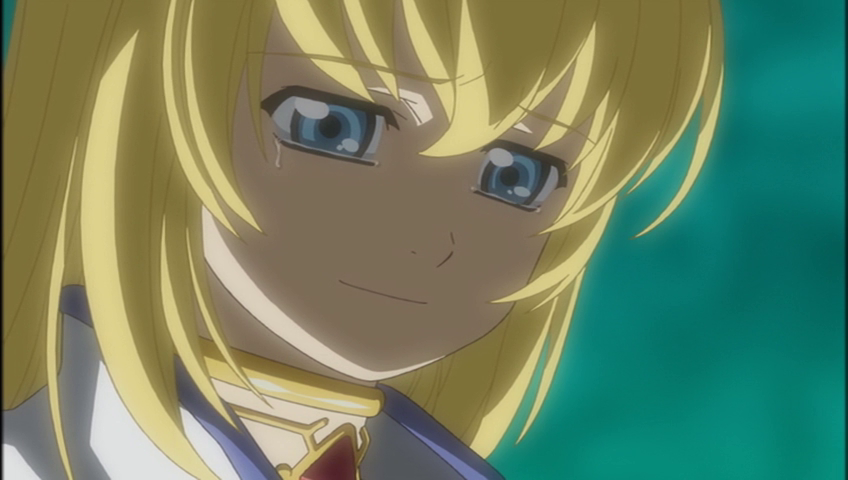 Just when our gang finally learns to love the world for what it is, things take one tragic turn after another, forcing our heroes to question the reason they fight, and whether their quest is one of nobility or selfishness. Remember, when one world flourishes, the other withers—people are bound to make great sacrifices.

Symphonia remains one of the top, if not THE #1 game in the incredible Tales franchise. Rife with gorgeous visuals, dramatic Celtic-inspired music, and heartbreaking characters, the animation holds on its own by establishing a fantasy adventure world (or two) where there’s always something to be lost for one of its characters. As the series progresses, we viewers, too, begin to question if a happy ending even exists for this broken cast of many ages and races. Symphonia tackles the harsh realities of acceptance and racism through its memorable characters.

In this vast fantasy world, several races and factions exist, most of which frequently bump heads with one another. Aside from the dwarves, who lead quieter pastimes as master craftsman, there exist elves. They live reclusive lives hidden in villages among the trees, like Heimdall, and choose to isolate themselves from society because half-elf breeding (the result of human x elf mating) is frowned upon. Largely stemming from human jealousy—for elves have much longer lifespans and can use magic, but humans possess neither—and disgust for one’s blood to be tainted by the others’ race, both humans and elves decided to hate the “perfect” half-elves all around, which leads us to Symphonia‘s most tragic bunch.

Half-elves cower at the tip of every whip cracked and at the shackles of every chain latched. Disdain from both humans and elves has caused these poor people to be punished for their mixed blood, and, if they are lucky, exiled from the land. Some literally fled to a floating isle called Exire to avoid their tragic fate. Those who could not escape detainment were hunted down, beaten, and even tortured. The main reason for their abuse, aside from their physical make-up, derives from the legend of the the great Kharlan War. In it, humans and elves fought over the two countries, Sylvarant and Tethe’alla, which left half-elves, near-omnipotent magic users with longevity in beautiful human bodies, to be caught in the crossfire.

If We Could Just Include Instead of Exclude . . .

Lloyd Irving, the main character, was raised by a dwarven father, meaning that he has seen the abuse from a more objective standpoint than that of a human, elf, or half-elf. Out of rage for their treatment, the Desians, a treacherous organization of half-elves, had swept through Sylvarant, enslaving humans and sacrificing them to create enhancing magic crystals called Exspheres. What they are doing is wrong, and Lloyd knows it, clutching his own mother’s Exsphere from when she was still among the living.

With a burning desire to end all enslavement and restore the two worlds to one so that all can live in harmony together, Lloyd uses his own experience with the people he holds dear to guide his quest. When it is revealed early on that his best friend Genis and sister Raine are, in fact, half-elves, Lloyd doesn’t grief or retaliate harshly. There’s even a scene where Genis mourns because he knows that when Lloyd and all of his friends eventually pass away, he will be left behind alive but lonely. Instead, Lloyd sympathizes, and smiles because he is still able to enjoy their company in the present, looking beyond racial treatment and into the value of their personality.

Genis himself undergoes his own journey when he meets the great Mithos, suppposed Hero of the Kharlan War. In actuality, he manifests as a young half-elf boy just like Genis who only wished for a world where he and his sister Martel could live in peace. Viewing Mithos as a painful mirror of his very being, Genis seeks solace in this poor boy. Unlike Lloyd’s determination to seek symphonic harmony with all races, however, Mithos sought to convert everyone into one homogeneous kind, believing that if race didn’t exist, then neither would racism. The boy is right and his ideals are true, but the execution of his plans via brutal nature was naive and cruel. The heart was in the right place, but the mind wasn’t, and that’s why Mithos continues to suffer until his own sister rejects him. 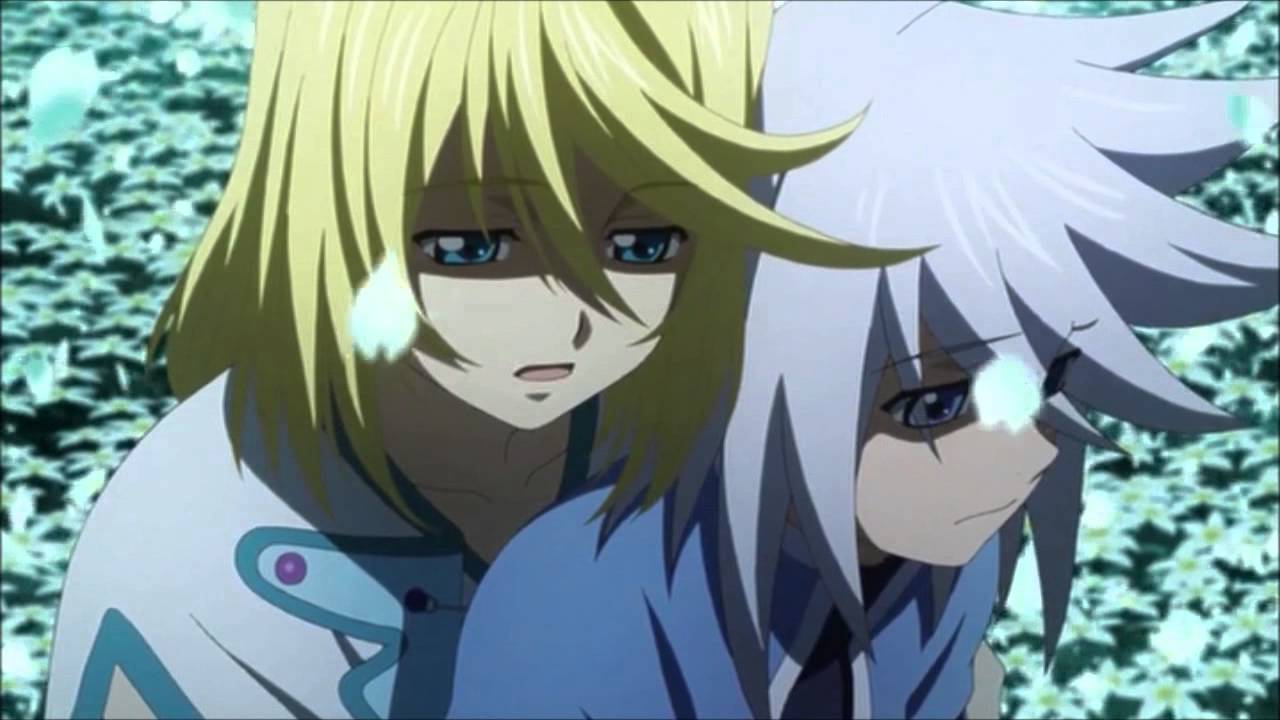 We need more people like Lloyd and Genis—people who have had experiences with trauma on both sides, yet still manage to see the good in others regardless of their race or status. But there’s only one way to handle this matter carefully. Rather than force people to accept the beautiful array of colored people on this planet, shoving our own ideals down their ignorant throats, we need to integrate warm, positive spirits into communities that suffer from racial exclusion.  We must value the characters, not appearances, of all different peoples in order to end this childish thinking.

Dividing the world into two so that people could exist on separate planes was not the answer. Same goes for establishing one master race. The weight of Lloyd’s unwavering acceptance and determination to create a world for everyone is the greatest joy that can come from the series. It’s the hope that someday we can all overcome our own tragedies to play in one harmonic symphony together that makes “Tales of Symphonia” ring true to so many hearts. Life in this kind of new world begins not by looking at what which makes us different, but celebrating what we share in common, and that is beautiful.

“Dwarven Vow #1: Let’s all work together for the sake of a peaceful world.” – Lloyd Irving

Tales of Symphonia is a really neat show full of heartwarming themes and deep characters, so do check it out if this kind of fantasy is your thing! For those who have seen it, what do you think of the game or its anime adaptation? What about how it’s emotional bits are portrayed? I preferred the anime’s flow in this department, but hey, let me know your thoughts!

This concludes my April 22nd entry in the OWLS “Colors” blog tour. Please check out Stephanie Clarke’s (Anime Girls NYC) post over the darker colored villains from the currently popular Twin Star Exorcists! And now the magic will trickle down to Eren (sakuradaisuki) as she walks us through “Colors” in the dear-to-heart Sailor Moon on Monday, April 24th! Thank you so much for reading, and until next time, this has been