Welcome! This is just a fraction of the reviews and reminiscent posts covering the expansive “Legend of Zelda” franchise in a project titled “The Legend of Zelda: A Blogger’s Journey,” which covers the many adventures of Link, from its creation in 1986 to its arguable magnum opus in 2017. This massive undertaking was started by fellow blogger NekoJonez (NekoJonez’s Gaming Blog), and though we had some rough-footing (what with aligning individual schedules to a project on this scale), I’m proud to be a part of the brave thirteen bloggers who were captivated by this memorable franchise, and wish to tell their own tales about the games they love.

This is only the third blogger project I’ve ever been part of, so an extended thank you to NekoJonez for recruiting me back in June of 2017—we’ve come such a long way, my friend!

When Nintendo’s Wii stormed onto the scene in late 2006, bringing with it a long-since-promised expansive world in epic HD realism now known as Twilight Princess, fans were not only shocked but a bit confused as to how the games all “linked” together. It had been four years since the Overworld was flooded in Wind Waker, and five years since Zelda was played on the small Game Boy Advanced console (unless you returned to beat Vaati again in 2005’s Minish Cap).

Luckily enough, Nintendo responded to our calls in 2007 by continuing the adventure that had still left enough open waters out there worth exploring. Once again mounting the ship deck, we shove off the shores and set sail for what will be the next “brief 10 minutes” of Phantom Hourglass and glimpse into the future 100 years later in Spirit Tracks. Come 2009, with no other Zelda entries in between, the Toon Link Trilogy (or reign) will finally get its resolution from the day, long ago, when a valiant king sacrificed everything he had—including his own life—wishing for the creation of a new future. Back Out at Sea

Phantom Hourglass picks right back up where Wind Waker ended, even giving us a unique recap of the game via pirate Niko’s storyboard slates. Because of this, it marks itself as a clear successor to WW, a treatment that no other game in the franchise has received. Link, Tetra, and the gang are on a voyage to explore the endless oceans, one day hoping to finally settle down on a larger continent.

But just as they begin their journey, the Ghost Ship, an eerie and haunting vessel whispered to cause other ships to disappear, catches the attention of our heroes. Tetra’s curiosity gets the better of her, and when she attempts to board the ship, the ghostly liner departs, causing Link to chase after her screams and, ultimately, fall into the dark water’s depths.

He awakens washed up on a shore, and when a mysterious fairy named Celia and a kind old man named Oshus rehabilitate the boy, Link’s journey of once again returning the princess to the land of the living begins. He first visits the cursed Temple of the Ocean King, where destiny bequeaths him with the Phantom Hourglass, an artifact with sand that protects the holder from the temple’s toxicity. In the temple, he encounters the infamous treasure-hunter Captain Linebeck, and while the Capt.’s penchant for riches and fame frequently falls to his arrogant, scaredy-cat nature, he secretly admires Link’s silent charisma, and swears on his treasure-seeking hide to find the treacherous Ghost Ship.

Phantom Hourglass pioneered the Zelda franchise onto the Nintendo DS, returning the green-clad Hero to small consoles where he got his roots. As we all know, the DS’s bragging feature was its stylus/touch screen action, to which PH is worthy of the boast. Straying away from the D-pad (which now functions as the options menu), all the mechanisms are completely stylus driven: draw paths for weapons and movement, tap to attack, swipe and squiggle to perform a rolling dodge—you name it! 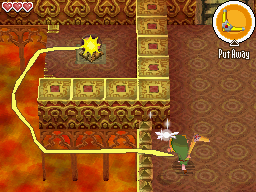 While the drawing function for weapons like the iconic boomerang can cause some combat inaccuracies, you’re more likely to be using the DS’s key features for puzzles, riddles, and story events. Zelda was known for problem-solving in elaborate dungeons anyway, so this isn’t too big of a drawback. If anything, the idea of tracing on screen adds a whole new level of fun that just doesn’t exist anywhere else in the franchise.

An example of this would be that, for the first time, you can freely draw on the maps with your stylus, forever leaving behind tips, secrets, and memories for whenever you next visit the Isle of Ember or Mercay Island. Same can be said about sailing—draw a path on the map and the ship will follow. Some of my most fond memories, in fact, were merely cruising on the open waters for days on end, admiring the view of the colorful and creative islands both near and far. Another fond memory of my gameplay experience is again attributed to the unique involvement of one’s senses. Save for taste (please do not eat the game cartridges, looking at you BOTW freaks), PH used the DS’s capabilities to its fullest. In one scenario, you are required to “extinguish the flames to open the door.” I recall spending HOURS just trying figure out what the heck that meant. After finally succumbing to a game guide (my first one ever!), I learned that you were supposed to blow on the mic sensor located between the top and bottom screens. How inventive! In another situation, you had to “stamp the Seal of Courage onto the sea map.” That is, you would SLAM the DS lid shut, then gently fold it back open again. Now THAT is not only creative as hell, but very rewarding if you figure it out on your own. (I got that one, yay!)

It’s the Ocean Temple, But Worse

Where Phantom Hourglass is praised for its gameplay ingenuity, gorgeous cell-shaded graphics (which was practically begged for after Wind Waker), and fun, memorable characters, its most unfortunate drawback is the Ocean King’s Temple itself, which especially sucks since the name of the game—“Phantom Hourglass”—revolves around a crappy timed dungeon. That’s right, the main antagonist, a squid-like demon named Bellum, didn’t want just any old explorer making it to the 13th floor. 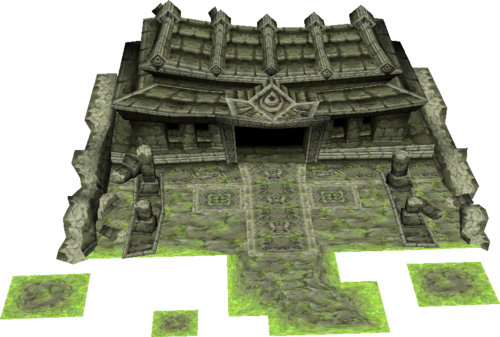 Thirteen fricken’ floors, and that’s not even the worst part—when you first visit, only three floors are available. Between visiting each island’s temple, you RETURN to the Temple of the Ocean King—tediously starting at FLOOR ONE, mind you—and unlock the next set of floors. Oh yeah, and a reminder: it’s all timed. Once you run out of time, the temple starts sucking away your health. As an added bonus, phantom knights roam the floors, and unless you’re sitting on a safe zone, they’ll chase you down, slash you, restart you at the BEGINNING of the floor, AND cut time off your hourglass. It’s ridiculous, it’s challenging, and there are very few shortcuts as you go along. It’s even been dubbed “Doing your Ocean King homework before getting to the fun stuff.” I’ve gained so many gray hairs from this temple it’s not even funny.

Message in a Bottle

But as us Zelda fans should know, we shouldn’t let one bad dungeon ruin our experience. Beyond the Ocean King Temple is a simple story of heroism and doing what is right even if that scares you. Although Phantom Hourglass felt like a bottle episode, every bottle has a message in it:

It left us knowing that the goddesses who created the Triforce perhaps watch over many worlds, and that even in those worlds, the Hero can inspire courage in the most unlikely of cowards.

I can proudly say that Phantom Hourglass was my first Zelda game (shoutout to the OG Gold Triforce DS Lite), and that despite my biases toward it, I’ll still recommend it to all the fans of the franchise, especially Wind Waker, and to those wanting to know if there’s hope in the future of the flooded Overworld.

To put it simply, yes, and it’s a world brimming with childish excitement and everlasting adventures. (none of this lovely artwork belongs to me)

Let me know your thoughts, memories, or nostalgia while playing Phantom Hourglass! It’s a game that took me places, and arguably brought me to where I am now. Many thanks again to NekoJonez for his hard work in putting this all together! PLEASE visit our hub article for “The Legend of Zelda: A Blogger’s Journey” HERE and reminisce on all the games that brought us joy, wonder, and excitement! We hope you enjoy it all! Now it’s time to board the train for Spirit Tracks, so go and meet me over there! Thanks for reading!