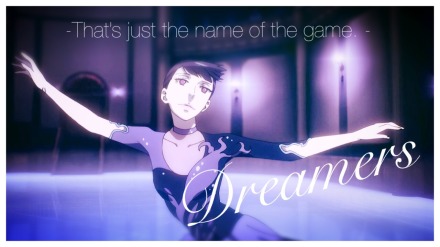 Chances are that if you were linked here from another blogger pal, then you might be new. To those first-timers, “Hi, I’m Takuto, welcome to my anime cafe!” As part of the OWLS blog tour’s  tenth monthly topic, “Dreamers,” I decided to incorporate what would have been my standard Death Parade review into this retrospective look at beauty stopped short by a cruel twist of fate.

Every individual has a goal or ambition that they devote their whole life to with passion and courage—whether it’s landing your dream job, traveling, or finding the love of your life. However, there are those who spent their whole life working towards a dream, but were cut short due to an unexpected occurrence. Those people are left only to dream and wonder about the possibility.

We are not going to focus on the individuals that achieved their aspirations, but instead look at characters that weren’t able to. We will explore what happens to characters who had their wings forcefully cut off, as well as those who gave up before they even started their journey.

I’m a little late to the Death Parade game, but better late than never, right? Also . . . IT’S FRIDAY THE 13—KARMA IS GOING TO EAT ME ALIVE AND SPIT ME OUT. Thanks Lyn for the prompt!

A brief discussion on the winter 2015 anime “Death Parade,” produced by Madhouse, directed and based on the original story by Yuzuru Tachikawa. SPOILERS WILL BE PRESENT.

What awaits us in the afterlife? Is there even such a place? As we understand it, nobody will remember how they died. There is living, and then the moment after death. So how did I get here—and why is there a bar in the afterlife?

Such is the state of mind of those who—fortunately or not—awaken in a mysterious bar remembering only that they lived, and that they are now here at a chic bar called the Quindecim. You cannot escape, but you are invited to participate in a game where the value of your soul is on the line, and weighed by none other than the discreet bartender Decim himself. Darts, bowling, air hockey—your typical watering hole time-wasters. Terrible joke, right? Honey, that’s just the name of the game.

As pairs of strangers stumble into the ethereal pub, they quickly ingrain it within themselves that winning is absolutely dire to making it out alive. Little do they know that despite having come from different walks of life, human nature is unchanging, including the worsts parts of it. That precise moment of despair declares the true winner and loser, and just like an arbiter Decim passes judgement based on the revelations alone, sending them to either heaven or hell following the game—that is until, however, the arrival of a strange black haired woman causes Decim to reevaluate this cruel system of judgement he employs upon his poor guests, as well as his own existence as a heartless arbiter.

Death Parade centers its focus on three important themes: the act of passing judgement upon others, self-realization, and death itself. What’s really special about this anime is how it breaks down these notions and turns them on their head, causing the lives of the characters in the show to fall short of any real achievement or happiness:

3. Judgement For one, Decim does not believe that the games bring out the true hearts of his guests, but that true shock and terror for one’s own being does instead. He draws forth these intense emotions by the games: slowly, he might re-implant the memories of their deaths back into their minds; or perhaps, he’ll break or disable a function necessary to win the game in order to see how those essentially “cheated  on” accept these brutal circumstances. Actions define your character, after all. But could you even call this fair judgement? Decim thinks so.

2. Self-Realization All of our guests awaken without a clue as to how they got there. None of them even remember how they died, which is crucial to the game Decim wishes them to play. As the matches progress and the memories begin trickling back, these individuals start to reveal their true colors to one another, some exploding with hypocritical violence like they used to back when they lived, others merely crying at the tragedies that befell them pre-death. What’s common between both the winners and the losers is that they are all struggling while coming to terms with the realities that fate has placed them in. That shock is a lot to take in. All at once, you remember the person you used to be: the sins that you committed, or the evils that were done to you unknowingly—how you were stabbed in the back, or how you yourself took another’s life. Here, self-realization isn’t used to instill individuals with hope, but rather complicate matters, causing some to break because of the pain.

1. Death One of the anime’s greatest secrets is revealed come episode two: the guests who believe that they’ve just been kidnapped or imprisoned are, in fact, deceased, presumably stuck in a purgatory of sorts until the arbiter judges them, sending them to either heaven or hell. That’s when the second great secret is revealed: there is no life after death, only reincarnation or the void. Adding more trauma to the hopeless situation, Death Parade anticipates that its viewers are left praying for the purest of the two guests, only to have that purity snapped by the ultimate revelation: There are no second chances, in life and after it.

Why do it all? To Show us Chiyuki, a Dreamer

This is the name of the black haired woman with no name, no memories, but a passing thought: she knows that she’s already dead. Inconveniencing Nona, Decim’s “boss,” the nameless woman is granted a working shift at Decim’s side until . . . hmm, well we don’t really know how long she was supposed to work, just that towards the latter half of the series memories of her past life start resurfacing, creating an unstable existence trapped with little time left to remember everything. Luckily, she does, only to realize that she, too, was ruined long ago.

She was heralded as one of the nation’s top ice-skaters, and as a child growing into an adult, everyone only saw her for that, an athlete. Chiyuki was thrilled with the praise and success, but overtime (especially as a full-grown adult woman) we get the feeling that she wanted to be more than that—to be known for who she was, not what. And nobody cared to explore that side of her. She was judged by the world for what she accomplished, not how she lived. 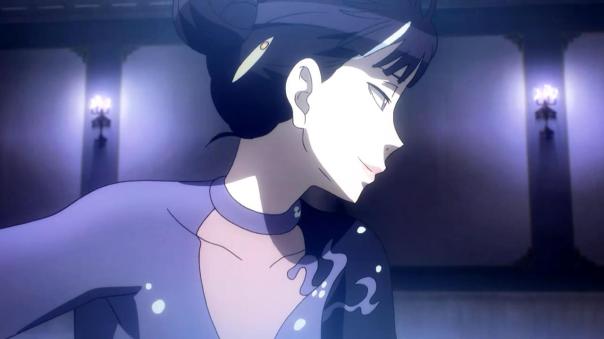 To balance the scales, Chiyuki is sent as an assistant to Decim to judge souls herself. She finds herself frequently bumping heads with Decim’s cool demeanor, though, frequently voicing her human emotions and opinions quite loudly—about how wrong Decim is, or how unfair the things he does are. She opens Decim’s eyes to the way of the world, allowing them both to tragically realize that, whether it’s in life or whatever comes after, no soul deserves the unbearable weight of judging others.

She was judged, she had a realization, and then she died. But not in the traditional sense. No—her death came with losing what connected her to others: ice-skating. After suffering a career-ruining injury, she was forced to give up her passions, aspirations, and biggest dreams of becoming one of the greatest ice-skaters to ever live—THIS was what truly killed her, for now, without a purpose, she merely exists and walks along a destination-less path. When Decim shows Chiyuki the world without her in it, she realizes that her suicide marked the finality of her regrets, not her death. The pain she caused her mother absolutely tore her apart, and she is left heartbroken because she wished she had valued her own life.

Given the once-in-a-“lifetime” chance to return to the living, Chiyuki denies the ultimate wish. Why? Why wouldn’t she want to apologize and reunite with her mom?? Causality, that’s why; give and take. When a soul leaves the earth, a ripple of cause and effect impacts the lives of others. By reclaiming the impossible—a second chance at everything—her soul is exchanged for another. This brings us back to the first theme, where YOU do not get the chance to weigh another’s life, nor the sorrows that would come with that stranger’s death. The revival of one brings about the unfair ruin of another, and if justice has taught her anything by this point, it’s that this is the greatest taboo.

At the story’s end, we find out that Decim’s existence is part of an elaborate experiment crafted by Nona all for the sake of searching for a better judgement system. Though Quindecim’s tactics are arguably fairer than the ones we have now, it’s still a far shot from true justice. That begs us to ask the essential question:

How long will it take to find where justice lies, and at the smallest cost possible?

Death Parade takes an exceptionally accurate stab in the dark and concludes that, though trial and error brings us inches closer towards the light, true justice still lies many, many lifetimes away. In a story rich with irony where dreams are crushed and lives are weighed like pennies, those parading into the bar of the afterlife died long before they even realized they lived.

Man, I didn’t even get into the slick animation (with amazing texture designs), atmospheric and emotional soundtrack, or the other characters besides Chiyuki and Decim, but perhaps I’ll leave that all up to you to explore yourself! It is, after all, regarded as a “Cake” here at the Quintaku. 🙂 But yeah, Death Parade, it’s a wild ride for sure, though I can’t help but feel that it, like its poor characters, had its expectancy cut short. I doubt there’ll ever be more, considering it’s an original source (the best kind of anime), but who knows, maybe Lady Luck will throw us a curve ball, or an extra toss at the dart board. (Just please, avoid the eyes. That would suck immensely.) Let me know what you thought of this anime!

This concludes my ~spooky~ October 13th entry in the OWLS “Dreamers” blog tour. The incredible YouTuber Gigi of Animepalooza *FINALLY* put together a video captioning the flawed life and broken dreams of Yuri!!! On ICE‘s KING JJ which you can view right here! Also, look out for our fearless leader Arria’s (Fujinsei) post about the lovely Silver Spoon this upcoming Monday, October 16th!  Thank you so much for reading, and until next time, this has been

14 thoughts on “Death Parade: That’s Just the Name of the Game | OWLS “Dreamers””