Hey everyone, welcome to day 4 of Blogmas!

To kick off the celebration, here is a list of some of my favorite YOI fan artists on Twitter—these people are amazing, and have made every moment that much more special!! (Check them out if you’re needing that extra YOI in your feed like I do, heh heh.) Support these incredible people if you can!!

Let me know if there is someone I should be following! Do YOU recognize anyone on this list? 😉

All of their artwork reminds me of how thankful we are that such a show groundbreaking show  even aired, let alone was popularly received. I like to call it groundbreaking because, at least for me, in a time where sincerely honest romance was ruled by the shoujo genre alone, YOI paved the path to a different kind of love—the rare kind that blooms realistically, yet still possesses that magical charm. It was one precious display of affection after another, and it all came together as if it were real, albeit a touch on the fast side. So here we are, a year after we were wowed one episode at a time, and we still can’t stop celebrating these boys and the sport they all love: ice-skating. Cheers to all of the fans, whose optimism, appreciation, and raw excitement all contributed to one of the most emotionally thrilling times in anime that I’ve ever been a part of. For all of the far-fetched yet deeply held theories and ships, and to all of the glorious art work that has graciously passed my eyes (and eventually saved onto my phone’s growing +13k photo collection), I’d like to present—in the order they appear in the show—TEN of my own favorite moments from the anime that changed lives one exhilarating winter ago!

Ten Yuri!!! On ICE Moments That Made Me Love It Even More

SPOILERS PRESENT—YOU HAVE BEEN WARNED!

No, I’m not that desperate for my smut. It’s just that, in general, seeing a character in anime exercise is very motivating for me. Whenever I see Yuuri working hard to get back on the ice as Viktor’s pupil, be it cold morning jogs or intense sets of sit-ups, I feel the urge to get up myself and do “something” about my own physical health. Simply put, Yuuri need to work out is both motivating, inspiring, and painfully realistic. 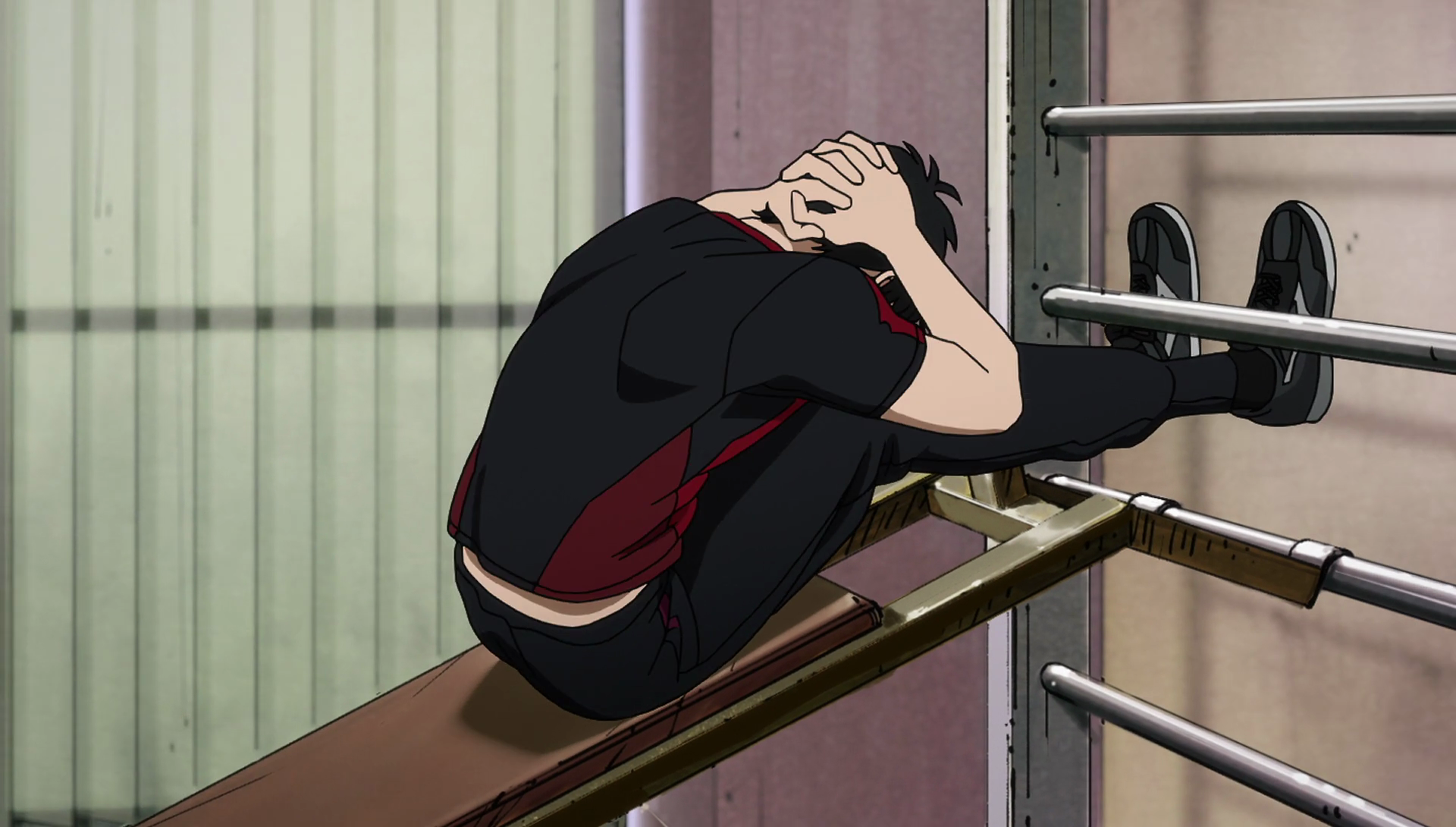 2. The duel of sexual entities: On Love, Eros vs. Agape

Y’all already know how much I loved episode 3 of this show. From a thematic perspective, it sets up the two big problems that our conflicting leads each have—Yuuri’s insecurities and Yurio’s aggressiveness—and a way to solve them both. By skating the other’s expected routine, both of which choreographed with Viktor’s seal of approval, the two come to understand what it is they’ve been missing in their personalities, and how to express these unknown feelings on and off the ice. It’s smooth, genius character development, and when timed with the two gorgeous songs of the SAME melody, it’s all just so great. (Plus, Eros Yuuri is THE BESTEST BOY. EVER.) 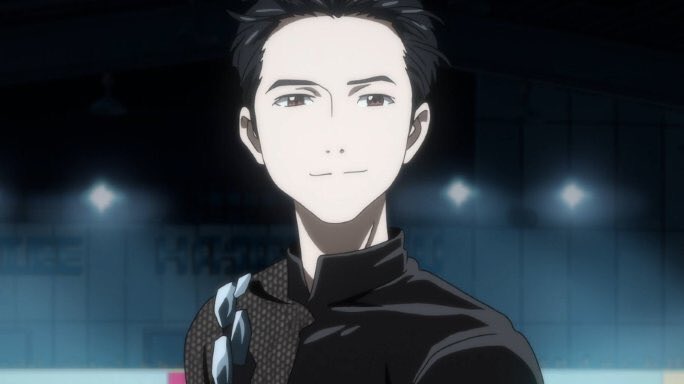 One of those “typical” fave moments, but the reason I like this scene so much isn’t actually because of the kiss itself—it was the community’s reactions to the scene’s ambiguity. “Did they actually kiss?” “Yeah, duh! The lip and body outlines TOTALLY match up!” “Umm, NO, actually, it was just a surprise embrace!” For the longest time, there was no real answer, and though I am definitely glad that the creators confirmed it to be a 100% genuine lip-lock, it was so much fun watching everyone’s scientific reasoning as to why it was or wasn’t a true kiss.

Episode 9 had a lot of great things going for it—Yuuri Katsuki’s struggle to skate without his one true love, Yakov’s brief moment of tutelage in the spotlight, as well as the next two things on this list. Arguably, my favorite moment was the reveal of Yuri Plisetsky’s free skate program. We were teased with hints of Yurio’s bold costume in the previous award ceremonies leading up to Russia’s Rostelecom Cup competition, but other than the fact that Yurio was doing ballet, we didn’t know anything else about it. In complete contrast to his beautifully developed Agape short program skate, his wicked, dangerously paced free skate was perfectly described: “A monster that continues to evolve with each performance, reaching new, impossible heights every time.” Eros Yuuri may be my favorite “persona” on ice, but Yurio’s intense skating to the powerful drumming strings of “Allegro Appassionato in B Minor” always excited me the most. 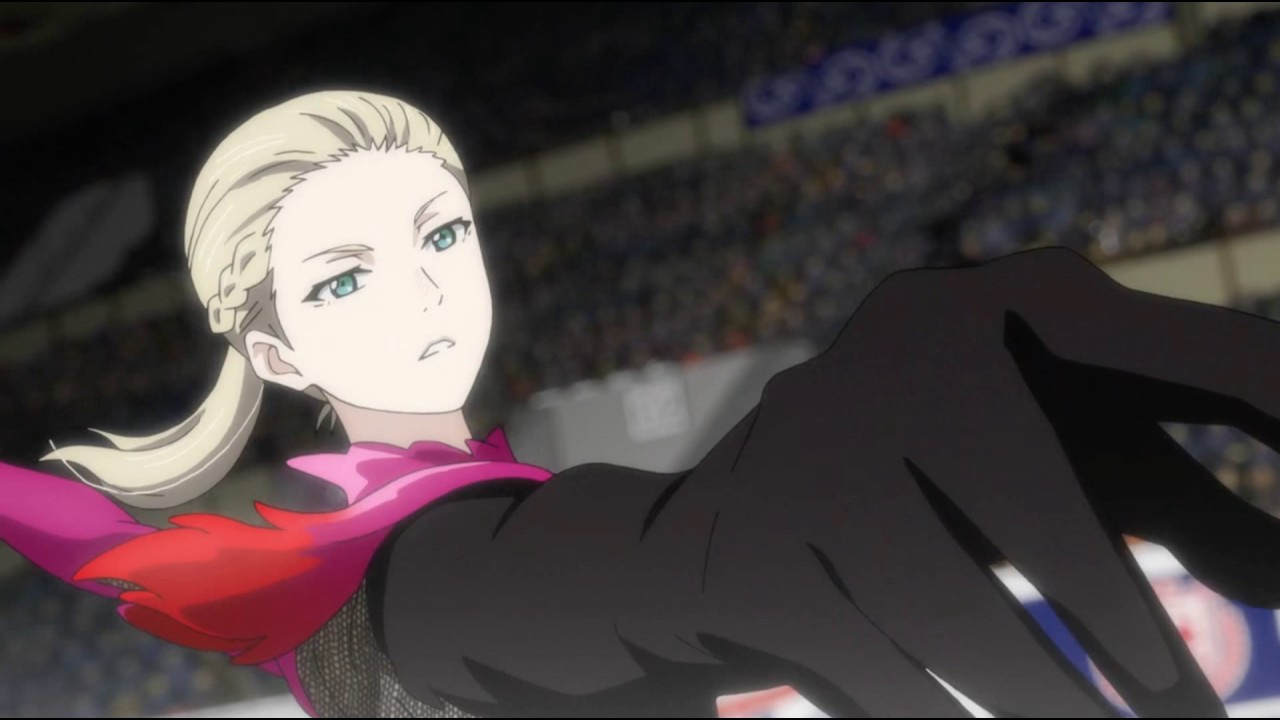 Right after Yurio is declared the Rostelecom Cup winner, the two share a brief yet very peaceful meeting out on the cold snowy streets of Russia. Yurio’s grandfather’s creation of the pork cutlet pirozhki pleases the two boys, as it is not only incredibly tasty (I imagine), but it symbolizes blending the best of both cultures to create something amazing, much as how the entire show and the sports competition itself represents the acceptance of all different peoples to pull off something that challenges and excites the world. It also mends the somewhat hostile bond the two shared, serving as Yurio’s first act of kindness and friendship to his Japanese buddy. Ah, what joys sharing delicious food with nice company can bring~!

6. The dog doesn’t die (also, that airport reunion tho)

Makkachin, Viktor’s adorable dog, is hinted at several times to be struggling with health issues: the somber expression when he appears lonely during the ED; the passing away of Yuuri’s own dog Vicchan prior to the events of the story; Makkachin’s strong companionship with Viktor (and already accumulated 15-ish years together); and just the cliche that the damn dog always has to die. Though it is highly unlikely that Makkachin is actually sick with anything, his emergency hospital visit did have us all panicking for a hot minute. Silly dog, Japanese buns are for kids. (And Viktor, if ya know what I mean.) Also, watching the two run side-by-side at the airport, gazing into the others’ eyes through the glass wall that divided them, was super romantic. “I wish you’d never retire.” Viktor, SLAY ME.

7. Barcelona sight-seeing (plus the cathedral scene)

The Grand Prix Final in Barcelona was incredible, but I think what made this “calm before the storm” episode so special was getting to see the characters out of the rink and touring the gorgeous city rich with culture and art. Otabek and Yurio went on a spontaneous motorcycle ride together. Yuuri went shopping and practically PROPOSED to Viktor in front of a gorgeous chapel (ughh those round, golden rings, F*CK ME UP). Everyone walked the cool, frosty, festive streets and met up to enjoy one final meal together in very “The Last Supper” fashion. Chris took a dip in a hot tub, JJ interrupted the fun, and Phichit took lots of selfies. THIS EPISODE IS JUST EVERYTHING, IT’S YURI!!! ON ICE: SLICE-OF-LIFE VERSION. This whole series uses social media and fleeting moments of victory and loss alike to convey how short and transient life is—and this episode is the epitome of those dear-to-heart themes.

8. Beginning relevancy and the Banquet Scene

AKA How Yuri!!! On ICE invented plot twists. SERIOUSLY THO. This revelation took the series to a whole other level, and arguably a level that was necessary to help tie up so many loose ends: Why did Viktor present himself in bold, full-frontal nude in the first episode? Why did Yuuri not understand Viktor’s emotional attachment from the get-go? Why was Viktor so quick to move to Japan in the first place? By saving this hilarious turn of events for this late in the game, the show is allowed to be seen as an absurd, light-hearted comedy at the beginning; it helps to speed up the developing relationship between the two, which makes full use of the series’s short 12-episode run. Plus, it keeps us in suspense, and allows us to be totally surprised in a show that would otherwise probably be pretty predictable. Very creative presentation (iPhone photo gallery) and use of ending credits to continue telling a story, too!!

Ironically, getting drunk allows for everything to suddenly make sense. The entire absurdity of the first couple episodes magically becomes relevant, and that’s just awesome.

Again, I LOVE Yuuri to death—he’s such a good boy, and he’s one of the big reasons I kept watching this show! But man, there are two big prizes to be won here at the final, and it just wouldn’t be fair if Yuuri won both of them. That said, I don’t believe Yurio won the GPF simply because it would’ve been “too much victory” for Yuuri. No. Yurio practiced hard, like, damn hard. He was already a child prodigy from the start, and unlike Yuuri, Yurio was willing to give up everything—pushing himself to the breaking point with the inclusion of his ballet lessons—in order to win the gold. Thinking back, Viktor even promised he would give Yurio the greatest senior debut one could ask for. (There’s that beginning relevancy again.) Well, Viktor wasn’t lyin’, and I couldn’t have been happier with the results. Yuuri may be the heart, but Yurio is perfection.

Yes, this is reference to not only the pair skate scene, but also the accredited title change in the ending credits. Did anyone else notice that the ED theme was renamed to “History Makers” with that extra “s”? You could say it stands for Yuuri and Viktor considering Yuuri’s new record in the free skate program and the depiction of “love wins” in media. It could also be for Yurio, who was not only the youngest to participate and WIN the GPF, but he, too, surpassed a record of 5-time world champion Viktor Nikiforov. But I like to think that “History Makers” refers to the entirety of the cast—all of the figure skaters who worked hard, together and for themselves, and put it all out there on the rink. After all . . .

There’s a place you just can’t reach unless you have a dream too large to bear alone. We call everything on the ice “love.” – Yuuri Katsuki 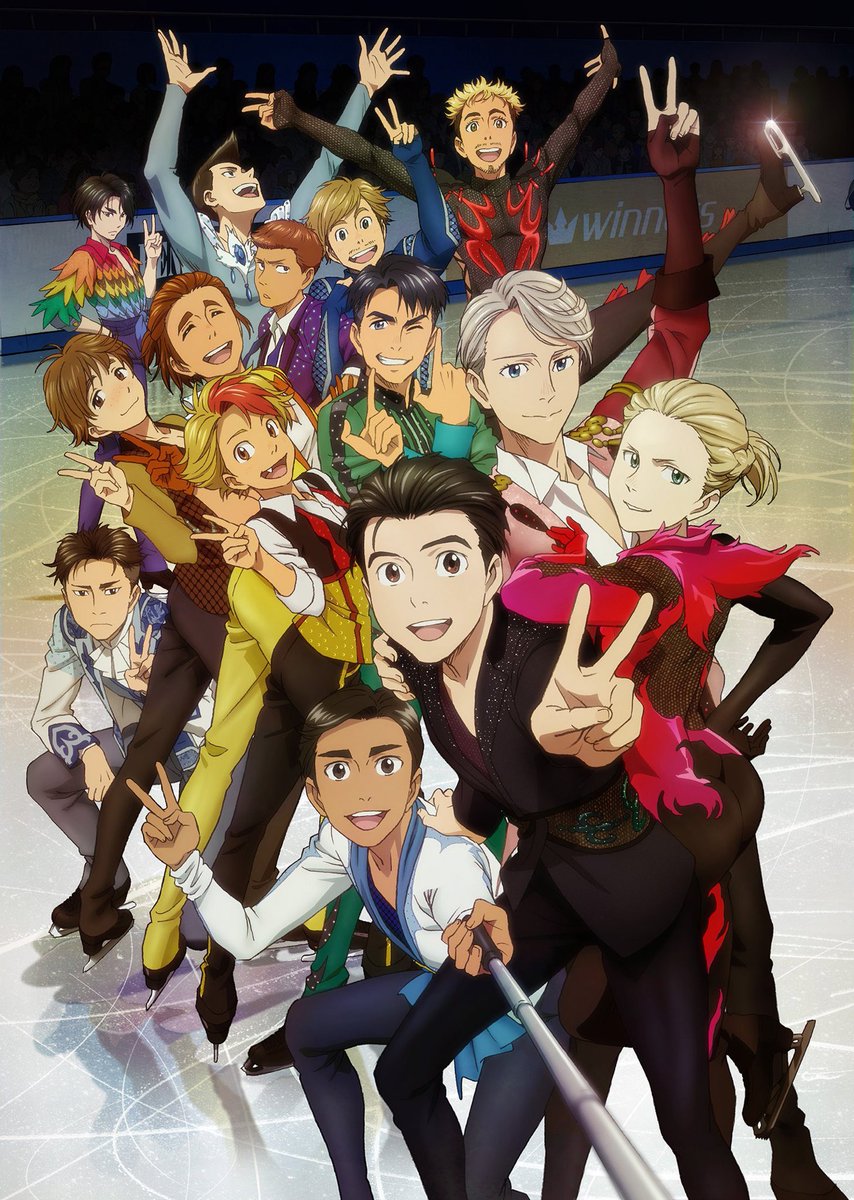 It was SOOO hard to just pick 10 moments from this wonderful show!! Also, you’ll notice that I kept it down scenes about the main three: Yuuri, Viktor, and Yurio. If I were to include the entirety of the cast, well, I’d have to have 10 moments for each of them because I love them all so much! Such great characters, despite many of them only appearing for an episode or two. Again, the fandom really made this show what it is for me now. What moments from Yuri!!! On ICE did you absolutely die for?! Let me know! I’m a little late today, but this wraps up Blogmas Day Four of the 12 Days of Anime! Thanks for reading, and I’ll catch you all tomorrow!