Hey everyone, welcome to day 7 of Blogmas!

Another quickie today, but a celebration nonetheless! This past early spring, I completed my first Tales game. For those unfamiliar with the massive franchise, the title Tales refers to a sprawling series of games, most unrelated, created by the game company Bandai Namco in Japan. They’re known for their iconic and elaborate character designs, fantasy-inspired landscapes, Celtic-inspired soundtracks, and most of all, their deep, thought-provoking adventure stories that can take just as long as a Final Fantasy game to complete. We’re talking about clocking no less than 30 hours per game!

Anyway, the Tales franchise means a lot to me. Not because I am overly familiar with the gameplay (as you can see by the title of this post, I’ve actually played very little Tales in my life T__T), but because I get my roots as a fan of entertainment in general from the fantasy genre, the Tales franchise being rich in the source. I’m a kid born and raised on attending Renaissance Festivals and Madrigal Feasts, often loosing myself in the adventurous worlds of tabletop gaming like (our adapted version of) HeroQuest (anyone remember that), TCGs like Pokemon and Magic the Gathering, books like John Flanagan’s Ranger’s Apprentice series, or even iconic films of the genre, Lord of the Rings and The Hobbit to name a couple. I love fantasy—essentially, its themes of valor, honor, and justice compose my heart for entertainment.

Most importantly, Tales of Symphonia: The Animation is one of only a handful of shows to get me started on anime. If  didn’t come across the Japanese opening of the game, “Starry Heavens,” which I’ll link below, I would never have discovered the wondrous world of Japanese animation.

So here we go: to the best of my ablility, I will briefly discuss my experiences playing both Tales of Symphonia and Tales of Zestiria on the PS3 from the weak non-gamer perspective that I have!

Loose Discussions on My Experiences Playing a “Tales” Game

(These will DEFINITELY NOT be formal reviews.) 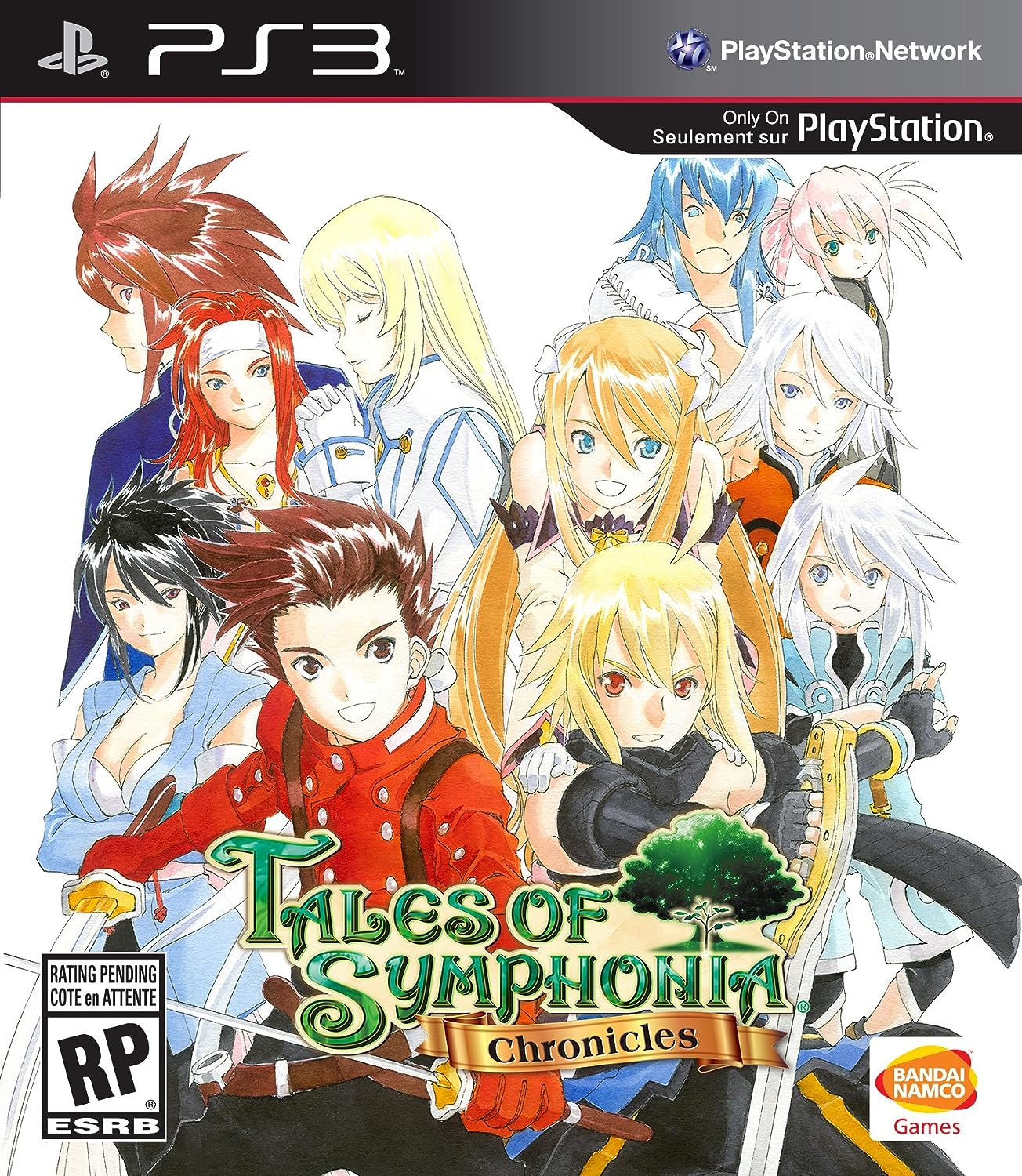 Looking back on it, Symphonia‘s anime does a really, really good job at sticking to its source material. It’s got all the major locations, major backstory elements pertaining to the main characters, and even some of the minor characters. Heck, even most of the theme songs for specific characters and towns were brought back for the anime! But this isn’t about the anime, I suppose. Back to the game.

One of the biggest problems I had with the game was the use of annoying side mazes that involved using a “magic ring” to properly traverse. It’s gimmicks like these that tend to ward me off of games—I JUST WANT TO SEE THE STORY. Some of those were really hard, too; as a beginner, I found myself referring to YouTube walkthroughs more and more as the game’s climax neared just to get passed these stupid little travel puzzles.

Another beef I had with it was the English audio. As a who’s fan loyal to what I hear first, that being the anime in fansubs, I couldn’t stand the English voices for Lloyd or Zelos. This was easily fixed by changing the game’s audio back to the original Japanese, however, so it’s not so much of a problem as it was just a preference. Raine’s VA for both  was good though, so way to go Kari Wahlgren!

Where it has its minor issues, I found myself immensely enjoying all of the sidequests or story elements that were dropped in the anime adaptation; piecing together the events and locations, however major or minor, that were missing from the anime was tons of fun, as I learned many new things about Symphonia‘s two worlds and their peoples. And while I did think that the final confrontation with Mithos, the ultimate antagonist, was a bit lousy in game format (or at least it had way less of an emotional appeal to it, though movies do tend to resonate with me more), I much rather preferred the game’s handling of tying up all the loose ends—specifically, resolving the pact with Origin and the birth of the new World Tree. It had more time to fully explain itself, and now after all these years I FINALLY understand who Origin is! Woohoo!

All-in-all, finally getting around to playing (and actually finishing, holy shit) Tales of Symphonia (PS3) after six LONG years of putting it off, I can’t help but feeling so complete—the story has finally come full-circle, the adaption introducing me to anime as a media and the PS3 game engrossing me in JRPGs. Do I now despise the anime for excluding so many “crucial” plot points? Absolutely not. I still hold Tales of Symphonia: The Animation in the highest regard, as it’s still a beautiful, moving tale of the harsh realities of racism and revenge, and the hope that comes with uniting two fundamentally broken worlds—I love both iterations of the story, and I probably always will. I DO recommend both the anime and the game, so pick your poison and head out on your own adventure ASAP! (Or be like me and experience both! More Symphonia is a very good thing.) 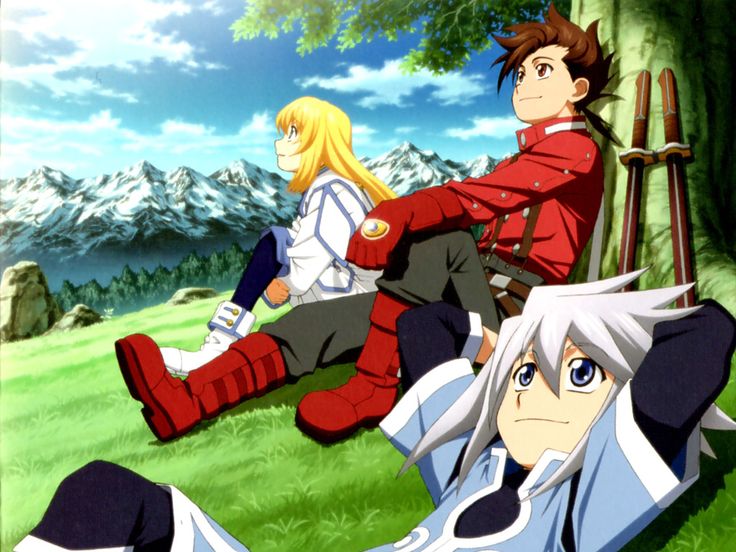 Ultimately, I was just so happy I could say I completed my first Tales game, but I immediately knew that It wouldn’t be the last. In fact, my second Tales adventure was awaiting me just around the corner—the end of a good school year, and the start of a brilliant summer!

I remember seeing a promotional poster for the anime Tales of Zestiria the X circulating years back, and I do recall being excited for it despite not knowing anything other than that it was another Tales adaptation by the GOD STUDIO, Ufotable. After getting to see the English voice actor for Zestiria‘s MC, Robbie Daymond, in person at this year’s Naka-Kon, I knew the first thing to do as soon as I got home: purchase the PS3 game (I actually ended up doing it in the hotel room, tho >.<).

My recent success with Symphonia set my passions ablaze for tackling the next big JRPG. Once you’ve played one JRPG, you’ve played them all, right? Or perhaps, you want to play them all. From the reviews alone, I already knew that this one was going to be the easiest-to-understand in the entire franchise so far, and that it was arguably the “not-very-smart one” in the series. The character designs charmed me too much, however, and the sparkling armitization sequences just blew me away! The real draw-in for this series, voice actor meeting aside, was the anime’s OP theme, “Kaze no Uta” by FLOW. It was just the smooth, crisp 60 fps display plus the ridiculously catchy tune that made this show a MUST for me. Anyone see a trend here?

That’s right, both Tales games that I have played drew me in through their gorgeous, catchy openings. I suppose that should speak volumes about their music choice and soundtracks, no? Easily some of the best stuff I’ve ever listened to. And I still jam to this song every time I’m working out (which is rare) or whenever I need something to lift my spirits (which is often).

Unlike Symphonia, however, Zestiria had yet another thing winning for it: the fandom. Oh the ships, all the ships, I tells ya!! I’m such a sucker for anything Sorey and Mikleo, Alisha and Lailah. They’re all just so pretty, AHH!!

EHERM. Tales of Zestiria, despite all my senseless fanboying, is a beloved game that, honestly, treads many of the same lines that Symphonia did: two races trying to coexist, one “chosen” person designated to heal the land, a loudmouth (yet adorable) MC and his reserved, intelligent best friend. “Best friend ;)” All of the parallels and similarities just make me glad that Zestiria, though argued as the “dumb one,” was my second Tales game.

As a PS3 game itself, the reviews ARE true in that the game is likely one of the easier ones in the franchise. I had very few problems in it . . . as in literally none at all. Sure, the story isn’t as deep or intricate (or emotional) as I would have wanted it to be (AKA more like Symphonia’s darkness), but that in itself makes Zestiria‘s almost overwhelming optimism contagious, and fun to play regardless of whatever mood you’re in. The visuals are, holy god almighty, some of the finest I’ve ever seen in gaming (THOSE SKIES THO F*CK ME), and the orchestral soundtrack should be on EVERY tabletop gamer’s background music playlist. Like, shit, need something that sounds absolutely LEGENDARY for a whole freakin’ hour, here you go:

To recap the Zestiria (PS3) experience, it was easy, simple, fantasy fun at its finest. You don’t need to collect many bonus items (if any at all, I skipped most of them), and the fights themselves are, WOAH, WHAT’S THIS, the most FUN part of the gameplay! I’m no gamer, and I found swingin’ around Sorey’s massive armitized swords, bow, giant fists—what have you—to be greatly pleasurable. If you’re not looking for the deepest Tales game, but one that’s great for a first-timer, Zestiria is the one for you. I recommend it.

FUN FACT: After meeting Robbie Daymond, I played through all of the game in English and loved it—proof that once again, whatever you hear first is likely your favorite. I was also incredibly hyped for the anime adaption, as it looks like the best thing to come from Ufotable besides Fate/stay night: Unlimited Blade Works, and that’s one of the most top-tier anime you could ask for! I’m currently watching the anime, and while the inclusion of the Berseria *promotional episodes* were pointless and time-draining, it’s a pretty good show. I won’t make any judgement calls now, but I’d love to review it whenever I finish! Also, for all I know, Berseria could very well end up being my next Tales game to experience, as it, too . . . well, I bet you can already guess.

What did you think of Symphonia or Zestiria? Any opinions on their anime adaptations, either? For the record, I have seen the Tales of the Abyss anime, but that was also very long ago, so want to rewatch that some day. Lastly, are there any particular favorites or recommendations from the Tales franchise out there? Let me know! I’ve heard that Symphonia is actually one of the bests, and though I haven’t played the others, I’m gonna probably call it as my favorite. Sorry, it’s just first-timer’s bias. This wrap up Blogmas Day Seven of the 12 Days of Anime! Thanks for reading, and I’ll catch you all tomorrow!