Hey everyone, welcome to (a very belated) day 10 of Blogmas (whoops)! I know today’s topic isn’t necessarily “new” for 2017 (nor is it for years prior), but this was the first year I was able to attend a theater to watch anime on the big screen!

Anime at the Theaters!

From Funimation’s screenings of films for Project Itoh, Dragon Ball, Fairy Tail, One Piece, Black Butler, Attack on Titan, Psycho-Pass, The Boy and the Beast, and In This Corner of the World, to live action films like Tokyo Ghoul, Rurouni Kenshin, and Shin Godzilla, anime has been on the rise, as most of these titles were indeed screened this year. And they’re not stopping at 2017; they’ve already lined up the beginning of 2018 with theatrical releases for the widely anticipated first Eureka Seven Hi-Evolution film!

Heck, even Viz Media had joined in on the fun with its grand premiere of Sailor Moon R: The Movie this past winter (which was, by the way, promoted with the red carpet treatment, complete with a voice actor/pro-cosplayer meet-up, AND a spotlight on Snapchat—FREAKIN’ SNAPCHAT). The same goes for Aniplex of America and their latest (successful) efforts with Sword Art Online: Ordinal Scale and Fate/stay night: Heaven’s Feel. Oh, and we can’t forget Sentai Filmworks with the big debut of the No Game No Life: Zero! Though Aniplex has been in the game much longer, it’s only now that their publicity has reached far enough to include theater screenings not just limited to the California area. And this trend will likely increase for all of these companies as the years go on, which is awesome because when more anime goes around, we get more of it!

I unfortunately wasn’t able to see this film (or any of the ones listed above, for that matter), but I did try, I did! ;_: Now I own the DVD. :3

It’s not often that anime “strikes rich” with U.S. audiences, though. The fan base and popularity expand, sure, but the monetary gain from screening anime films in the U.S. is nothing compared to what Warner Bros., Sony Pictures, Walt Disney Studios, or even some indie films earn. But every bit helps, and seeing as how screenings of our favorite niche titles keep popping up, we can only imagine that it’s all helping the anime industry in Japan. Anime News Network wrote an article during the film screening boom awhile back, so you might want to check that out if you’re curious to know the “science” behind it all.

As I was saying, very rarely do anime films earn household names thanks to theater screenings: Akira, Ghost in the Shell, and most Studio Ghibli films are pretty well recognized thanks to their unique artistic styles and of course, classic nature. Just this past spring, Funimation streamed a little title called Your Name.—ever heard of it? Yeah, I’m sure you have, and you’ll probably already know that it’s now the world’s highest-grossing anime film, finally beating out Ghibli staples like Spirited Away (2nd), Howl’s Moving Castle (3rd), and everyone’s favorite fish-girl with the round tummy, Ponyo (4th). No, it’s not a competition, but credit should be given where it’s due, and Your Name. IS one incredible, breathtaking film. While Japan is still loyal to Spirited Away, Your Name. did manage to climb all the way up to become the fourth highest-grossing film in the nation. If that doesn’t speak volumes about the film, I’m not sure what will. My “Your Name.” Experience

Have you ever been to a Warren Theatre? They’re apparently prominent in the big midwestern cities, but essentially, they are luxurious movie theaters heavily decorated and inspired by Hollywood during the Roarin’ Twenties. Very Gatsby-esque and decked out to the extreme, one wearing athletic shorts and a t-shirt (me) would feel very out of place. EVERYTHING is gold in that place—no, literally, there are tall pillars embossed with shiny gold-colored plating. Exquisite paintings hang on the gorgeously patterned walls, and the staff are finely dressed in slick black suits. Even the bathrooms are paved with solid ebony marble flooring with rows upon rows of ridiculously clean stalls. There are several open little outlets that line the curtained walls, each containing waiting rooms with comfortable maroon leather couches and, wait, yes, a fireplace.

All-in-all, my mom, dad, and sister and I were very shocked. Very shocked. The place was simply stunning, and I couldn’t recommend it enough. The Warren is an experience, not just another place to watch movies.

[They even had this cool giant promotional poster for the Ghost in the Shell live action, which I was absolutely enamored by! You can bet I took pictures posing by this, haha!]

So the Warren was hella lit, but what made the three-hour journey to see Your Name. all the more worth it was the meet-up. (Woah, Taku has friends that like anime IRL?! Yup, you bet.) If you didn’t already know, music was my thing from basically birth up through high school (and even now, too). I play the cello, and on my second year with the All-State Orchestra, my sister made friends with her fellow stand partner. He was also Asian, so there’s kinda that instantaneous bond right there, and we all kept in contact after that fateful encounter.

Flash forward, and he starts talking about this film he saw on his way back from Japan, a title that, though unfamiliar with my sister, was screaming at me because of all the recent hype: Your Name., Makoto Shinkai’s latest creation. He recommended the film because he’d seen it, I knew how to get us to see it, and my sister was the glue that held us all together. The only problem—he lives across the state, over three hours away, and while it might not seem like much for the average traveler, you can’t forget that we’re youngins, and that distance was enough to keep us apart.

So we agreed to meet halfway. He chose a conveniently located place where we’d meet up to eat (which was a really awesome and tasty Japanese restaurant similar to how Qdoba or Chipotle are fashioned—how fitting, I know), I found the Funimation-approved theater, and my sister kept us all excited (well, more than we were, at least)! Several laughs later, it was time to make our way across the parking lot, and before we knew it, we were ushered into the theater balcony where we were seated before a giant red curtain. That’s right, this movie theater opens and closes its screenings with the grand red curtain. God, did I mention that I love this place??

I mean, all this considered, it was so very difficult to believe that this dream of mine would quickly come to an end. It was not only a bittersweet ending for Mitsuha and Taki, but for the three of us, too. Honestly, bidding farewell to a friend had never been harder. But we agreed to meet again, and sure enough, just this past weekend, we met halfway once again to have fun at the city’s mall. We were going to ice-skate all together, but he had a piano competition coming up and his mom didn’t want him risking his wrist—perfectly understandable, and we had fun nonetheless. (Our family did go ice-skating, though :P)

Thoughts on Life, Transience, and Memories

It’s not often that we get to have perfect long-distance friendships. And it’s also not often that we get to cross that seemingly great distance to have our own Your Name. experience. Little did we know it, we, too, traversed the state in search of the other and promised to meet up again someday. And when someday finally came, we were all just so, so happy.

We have to take advantage of the fleeting opportunities that life presents us with. Not every moment will be magical, but when you make the most of what you have—pouring all your heart into what you want most—sometimes chance grants you that picture-perfect moment . . .

Only for it to quickly fade into a memory.

Cherish the friendships you currently have, relish in the art that entertains you, and I cannot express this last one enough: Take as many photos as you can. I say it all the time, but the reality is that life goes by quicker and quicker with each passing day. Don’t let thinking about the “could have beens” before they even happen stop the “can be” that you can make possible. There was a point where I considered not reaching out to my sister about the film because I thought it wasn’t going to work for some reason. I was wrong. We can make beautiful memories to last a lifetime, and we can take risks to pursue happiness.

It’s all a matter of taking the first step and hoping that it leads you to enjoying the step after that. 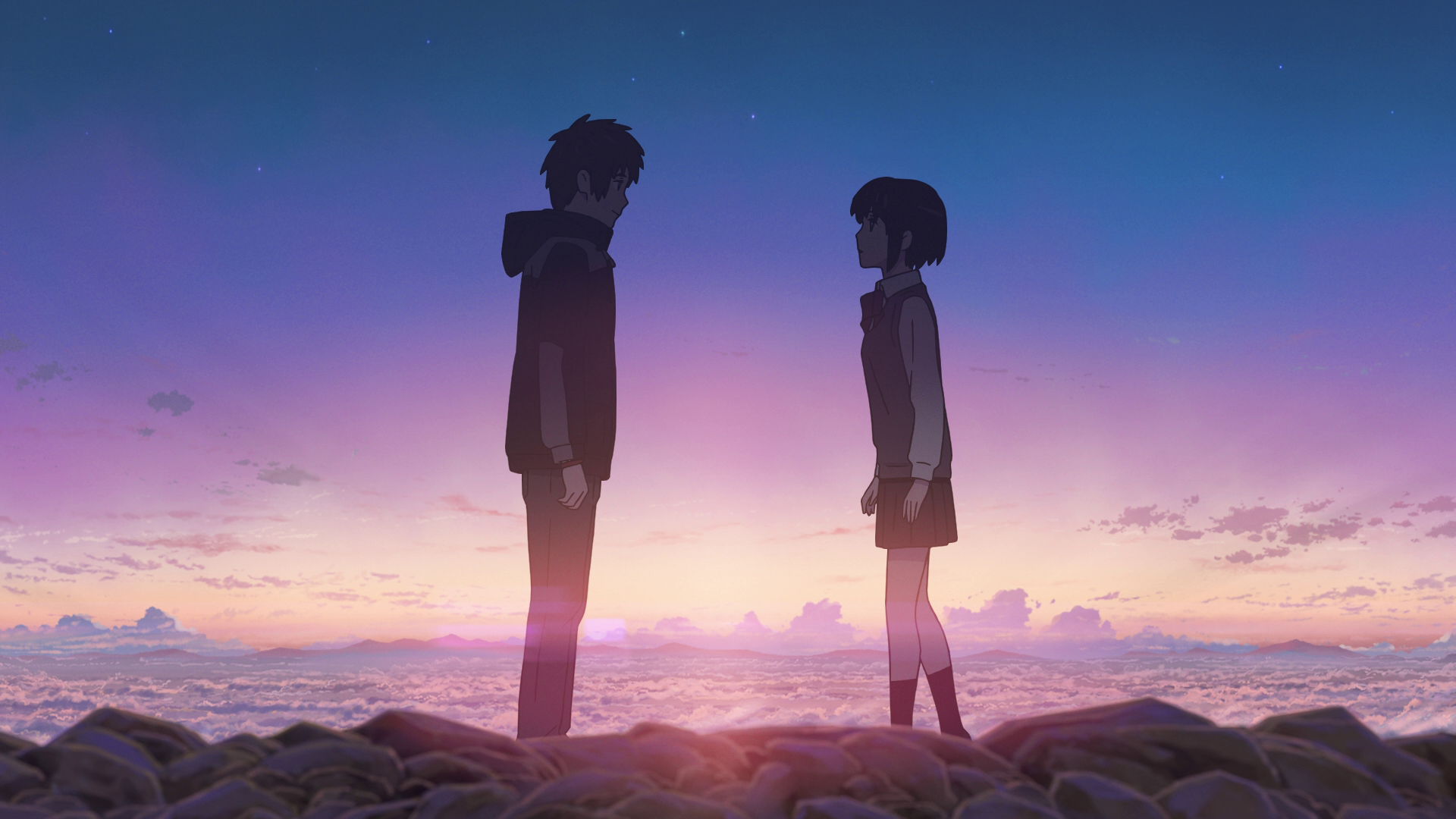 Wherever you are in the world, I’ll search for you. – Taki Tachibana

Maybe now you understand why getting to see Your Name was one of my highlights of 2017. Did anyone else have the opportunity to visit anime in theaters this year? If so, what did you see, and how was your experience? I’d love to know! I’ll be logging this as a “Cafe Talk,” so feel free to let your thoughts loose on this post or anything else related to it!

I’m on a bit of an odd schedule now thanks to the holidays, but this concludes Blogmas Day Ten of the 12 Days of Anime. Thanks for reading, and I’ll catch you shortly with another belated post!