A brief spoiler-free review of the 24-episode spring 2015 anime “Ore Monogatari!!,” also known in English as “My Love Story!!,” animated by Madhouse, directed by Morio Asaka, and based on Kazune Kawahara’s manga of the same name.

Takeo Gouda is a big guy. Though more akin to a bear (or perhaps a gorilla) than a human, I suppose simply calling him “big” wouldn’t do this mammoth of a man any justice. Takeo is an overwhelming, brutish force of masculinity, but underneath all that beefy muscle and thick skin lies a kind, respectful, and unwavering heart of gold. While he may unintentionally scare off all the girls he meets (often coming to their rescue only to go unaccredited for his good service, of course), he’s amassed quite the male following among his high school’s freshman class for his honorable sense of duty and righteousness. Did I mention Takeo was just a freshman? Oh, and did I mention that he is a pretty big guy? 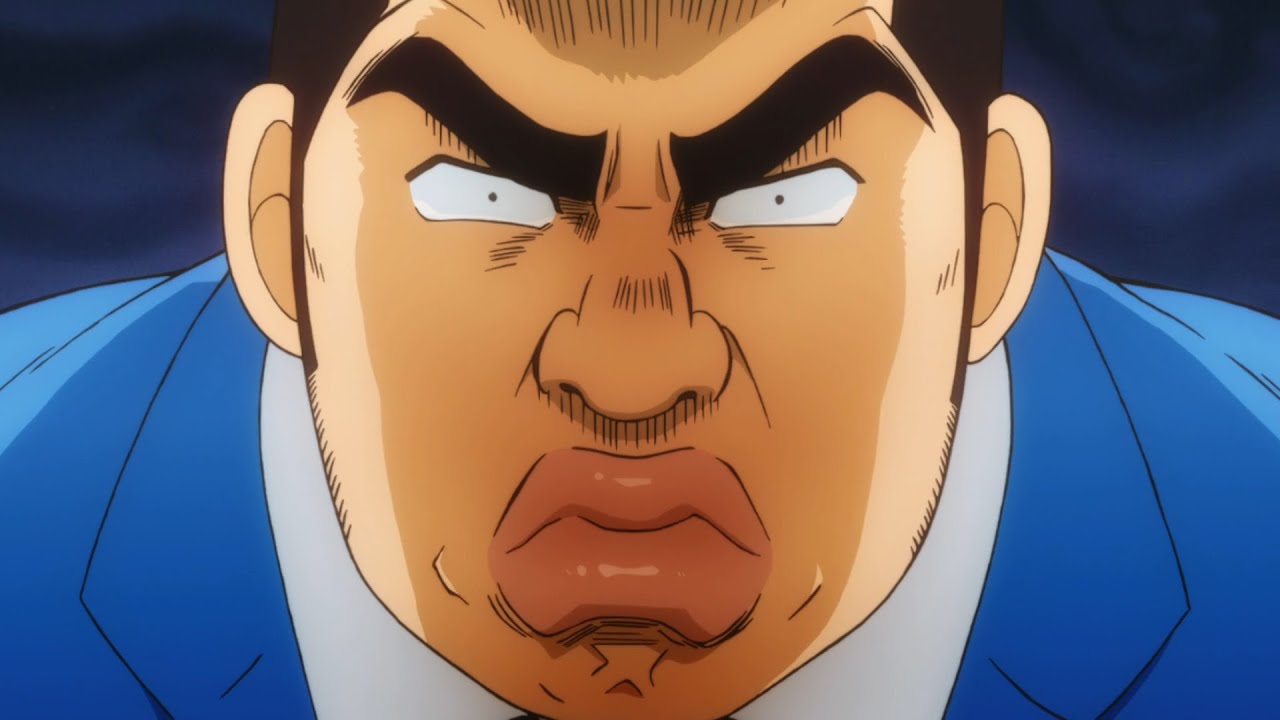 Well, even if his nonexistent love life never takes off, at least Takeo’s got Sunakawa, his cool and handsome best friend. The two are as inseparable as brick and concrete (I’ll let you guess who is who), but maybe therein lies Takeo’s problem: Sunakawa’s irresistible yet subtle charm and dashing looks has unintentionally captured the heart of every young girl Takeo has ever loved! Suna politely turns them all down, however, and as much as that would aggravate any other guy’s best friend, things somehow always work out for the two.

One day, Takeo nobly saves one Miss Rinko Yamato from a groper on a train, ultimately throwing him head-over-heels for this sweet, kind-hearted baker! Though the two awkwardly meet several times afterwards, Takeo holds himself back, suspecting that “Miss Yamato” only has eyes for Suna. In a surprising turn of events, Rinko admits she feels love, but it’s not for Takeo’s best friend—as his good karma would have it, Rinko loves Takeo, and here begins their love story!!

Love Comes in All Shapes and Sizes

By episode three, I honestly thought the show could’ve ended. SPOILERS but not really, the two fall in love very quickly, and Takeo’s fear of never hooking up with a cute girl disappears come this early confession. Why is it called My Love Story!! then if we already know how the story goes? WELL, unlike most shoujo series out there that tantalize viewers with a painfully slow romance that ends with the main couple holding hands (if you’re even that lucky), My Love Story!! follows Takeo and Rinko throughout their relationship: celebrating holidays together, meeting the others’ family (Takeo’s parents, oh my god, when you see them it all makes sense), and most importantly, hooking up their fellow dudes and gal pals that are looking for a high school sweetheart. It’s not a test to see how long they stay together. Rather, it’s about how they can unite the hearts of others through their love.

Because Rinko isn’t the kind of girl to wait on her man, the story moves at a pleasant pace—don’t get me wrong, it’s still very, very slow compared to most couples out there, but it’s a slow-burning tenderness that feels so honest and true. The series is, for the most part, quite episodic, as new characters are brought on the screen only to be swiftly swept off their feet by these two match-makers and eventually (and gently) “tossed aside.” Any relationships that do return to the screen build nicely over the course of the series. Takeo and Rinko are #couplegoals, and there are probably very few shows out there that are sweeter than this rom-com.

Also, can we appreciate the unusual MC’s character design here and Rinko’s unwavering love for him? There is no joke—she legit values his looks. Bless these two.

Takeo Gouda is truly A GOD AMONGST MEN. (This man’s lips, just wow.) He’s a big ol’ softie despite his ridiculously boarish stature, and he’s got the restraint of a freakin’ nun, no joke. Often times that over-politeness causes Takeo to seem like an awkward lug, but it’s honestly so lovable and refreshing that I just can’t. In fact, the whole show feels like a huge refreshment from the annoying tropes of the shoujo genre, granted that I haven’t seen nearly enough to consider myself knowledgeable on the subject. Though Takeo’s personality is goofy, dutiful, and well mannered, the guy would be nothing without a voice. I DID watch My Love Story!! with Sentai’s English dub, and while they normally aren’t at the same quality as Funimation or Aniplex’s, this dub ROCKS. So much character in every comedic line, so much heart when things need to be cute, Andrew Love FINALLY plays a teenager where his macho voice is appropriate—you could say that I “Love” his burly performance!

The very same goes to Miss Yamato, voiced by the ever-lovely Tia Ballard (I just can’t get enough of her voice)!! If Takeo is sweet, Rinko is even sweeter—and no, I’m not just talking about her mouth-watering dessert creations. She’s the rich chocolate chips to Takeo’s squishy dough, the perfectly layered icing on an impressively sized cake. This woman has no flaws, I tell ya! Just kidding: she has a less-than-delicate side that really wants to get together with her boyfriend (who’s totally not prepared) on a more intimate level. But honestly, isn’t that everyone? Friendship, the desire to connect with another, and letting go of repressed feelings are all major themes in this series, and where lovemaking is concerned, My Love Story!! is still one of the purest examples out there!

And I couldn’t forget about our normally-the-lead-but-now-just-a-bishie Sunakawa AKA Austin Tindle. How Sentai got a magnificent beast like Tindle, the world may never know, but all that matters is he’s here, and that he plays the unamused hot guy. If it weren’t for Takeo’s overwhelming presence, Suna would absolutely take the spot as best boy. He may look like he’s bored out of his mind and dosing off half the time, but Suna is kind, attentive, and always watching out for Takeo’s large sweaty back. Every single Suna moment left me like, “Bro . . .”, as he’s a really upstanding and intelligent guy despite characters like his  typically being cast as the “high-and-mighty jealous types” in this situation. Like the rest of this all-star cast, Suna is thankfully so much more than a stereotype, and I valued his brotherhood and cool-headedness. He’s easy to miss at times, but he’s always there for his friends.

LITERALLY ME in every episode. Madhouse brought to life one of the most adorable romance titles out there, yet there’s an added level of humor to Takeo’s build and [hilariously grotesque] facial expressions that made me bust a gut at least ten times per episode. Surprisingly, the slapstick comedy here won me over as one of the biggest reasons why everyone should watch this show. Between the bestial way in which Takeo reacts to everything and his demonstrations of, umm, affection to Suna, I was left with tears in my eyes it was all so funny. Again, this is where the English dub really shines! 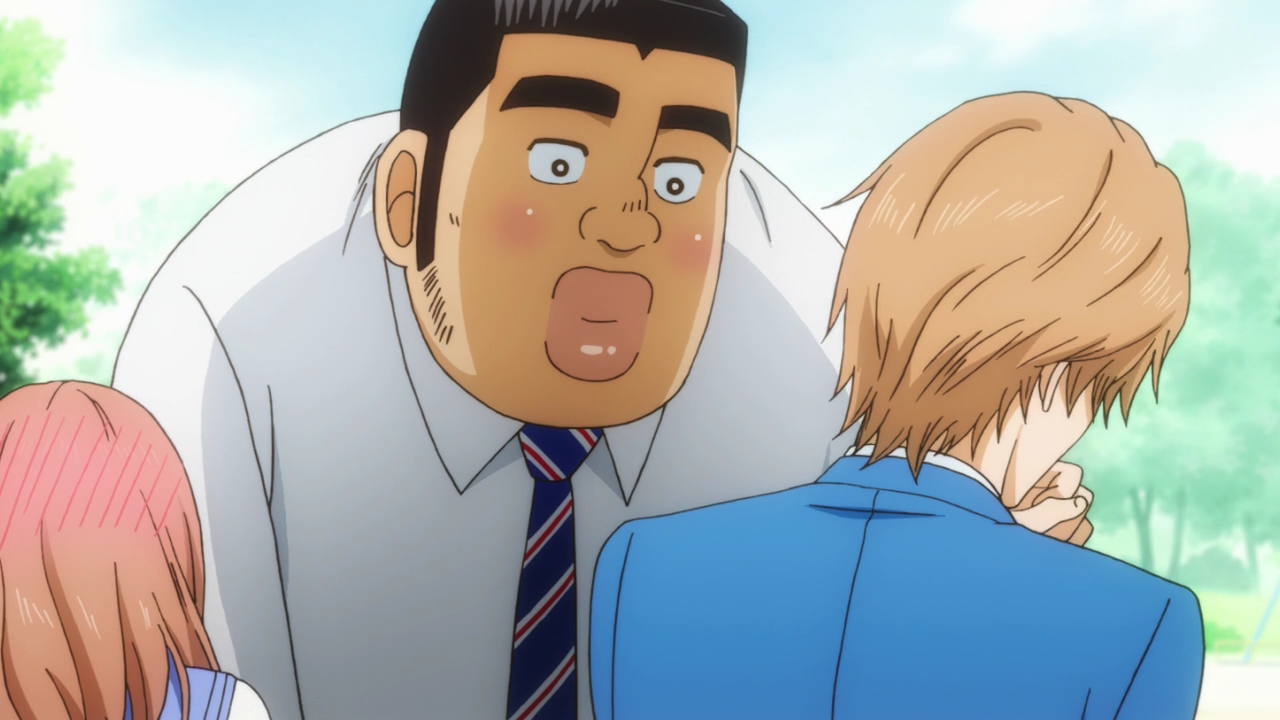 A “Cake” Title in its Purest Form

My Love Story!! stole the simulcast spotlight back when it aired in 2015. Although its popularity has died down significantly (the manga picking up the anime’s slack, as it offers a continuation to what is ultimately but an adaptation), it’s still a pleasantly refreshing rom-com that cuts out all the shoujo drama BS. It’s light-hearted, cleansing, and even touching when it wants to be. Plus it’s really funny! I’ll admit that romance anime aren’t really my thing, so this series was PERFECT for a viewer who tries to avoid the unnecessarily serious stuff.

All this and more is why I recommend My Love Story!! to ALL anime fans. Should you enjoy watching it, you’ll come away feeling happy and bubbly inside, and perhaps even recall your first innocent love (or wistful bromance). We all have stories to share, and Takeo Gouda’s is one that’ll leave you laughing out loud one moment and clutching your warmed heart the next.

I helped a girl who turned out to be a nice girl. That gives me the strength to go on. — Takeo Gouda

Kind of short review, as the show really is sweet and simple. If you watched My Love Story!! and enjoyed it, what part in particular made you like it? Was it the atypical character setup, the laughs, Rinko’s treats, Takeo’s boundless excitement, or just Suna being Suna? You ought to let me know! I WILL try to respond to your comments quicker, haha! 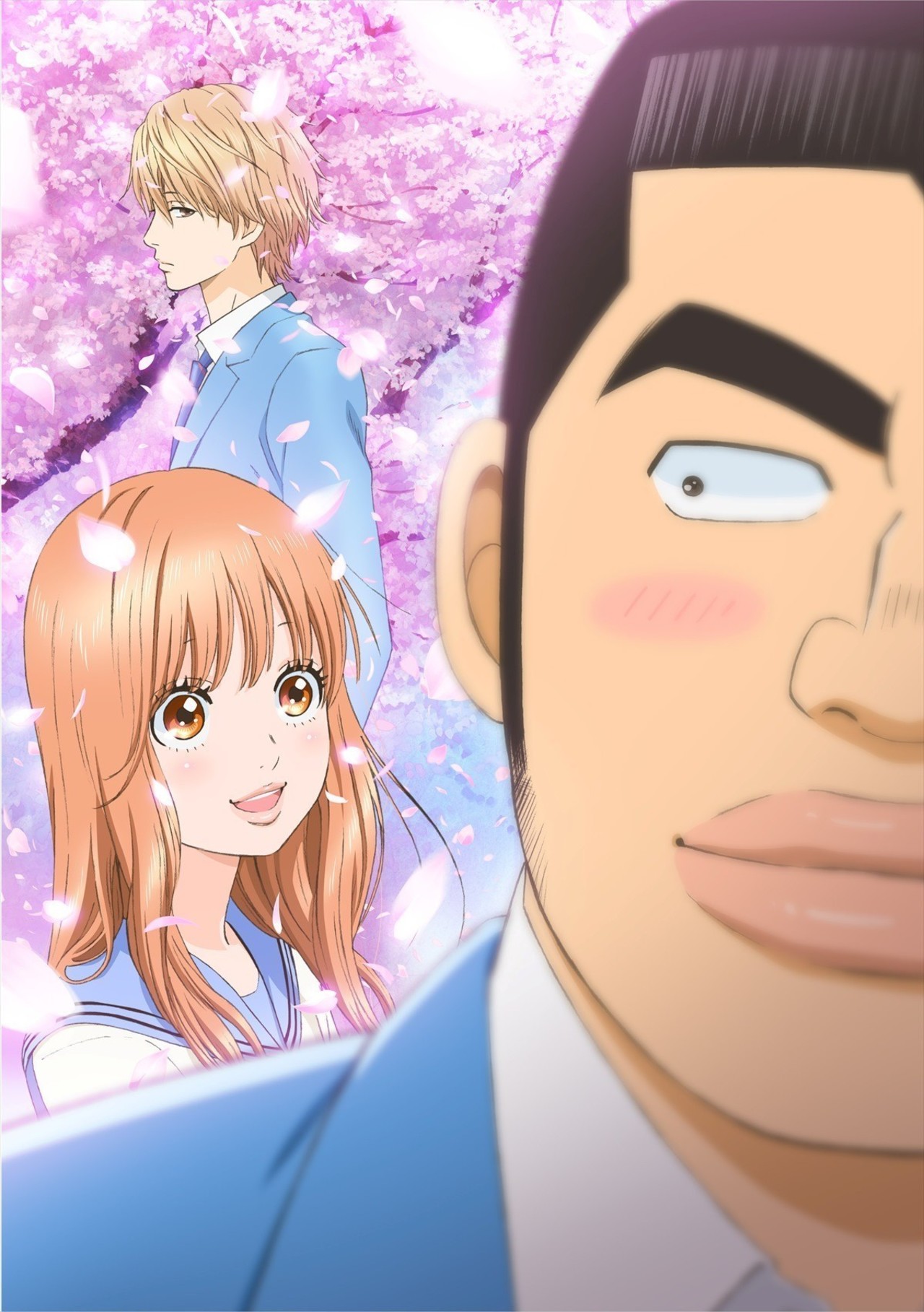 If you couldn’t already tell, this series currently sits lovingly on my shelf as the ideal “Cake” title here at the cafe, and I do hope you give it a shot if you haven’t yet. Thank you so much for reading, and until next time, this has been