A brief spoiler-free review of the 10-episode winter 2018 anime “Fate/Extra: Last Encore,” animated by Shaft, directed by Akiyuki Shinbou and Yukihiro Miyamoto, and based on Type-Moon game “Fate/Extra.”

Hakuno Kishinami is a high school student—no, was a high school student? Doesn’t matter, because in a flash and flurry of visions pertaining to both the past and the future, Hakuno awakens in a strange virtual world styled much like a video game. He remembers neither his former life, nor how he got here, but before he even has time to comprehend his wacky situation, Hakuno is forced into a fight unlike one the world has ever seen: the Holy Grail War. Only this time around, supposedly over a hundred masters are competing for the coveted wish-granting chalice! Thankfully, a servant adorned in a maelstrom of crimson rose petals and shimmering gold manifests and comes to Hakuno’s aid. Her name is Saber, and together the two set out to conquer the seven enigmatic “floors” of this Grail War’s stage, as well as answer the burning question in Hakuno’s mind: “Who am I?”

I borrowed that last quote from the official synopsis because, within both the characters and the story itself, there’s a vague sense of emptiness surrounding the situation. As an alternate route for Fate/stay night set in an entirely different universe, countless questions about the world and its origins arise. Unfortunately, very few are answered, and as each episode progresses, it becomes harder and harder to care about Hakuno, the entities he encounters, or this chapter of Fate in general. This new Grail War also presents itself weakly, rarely calling back to the fact that Hakuno should be fighting other servants and masters along the way when, oddly enough, each floor seems abandoned, which brings me to my next point. 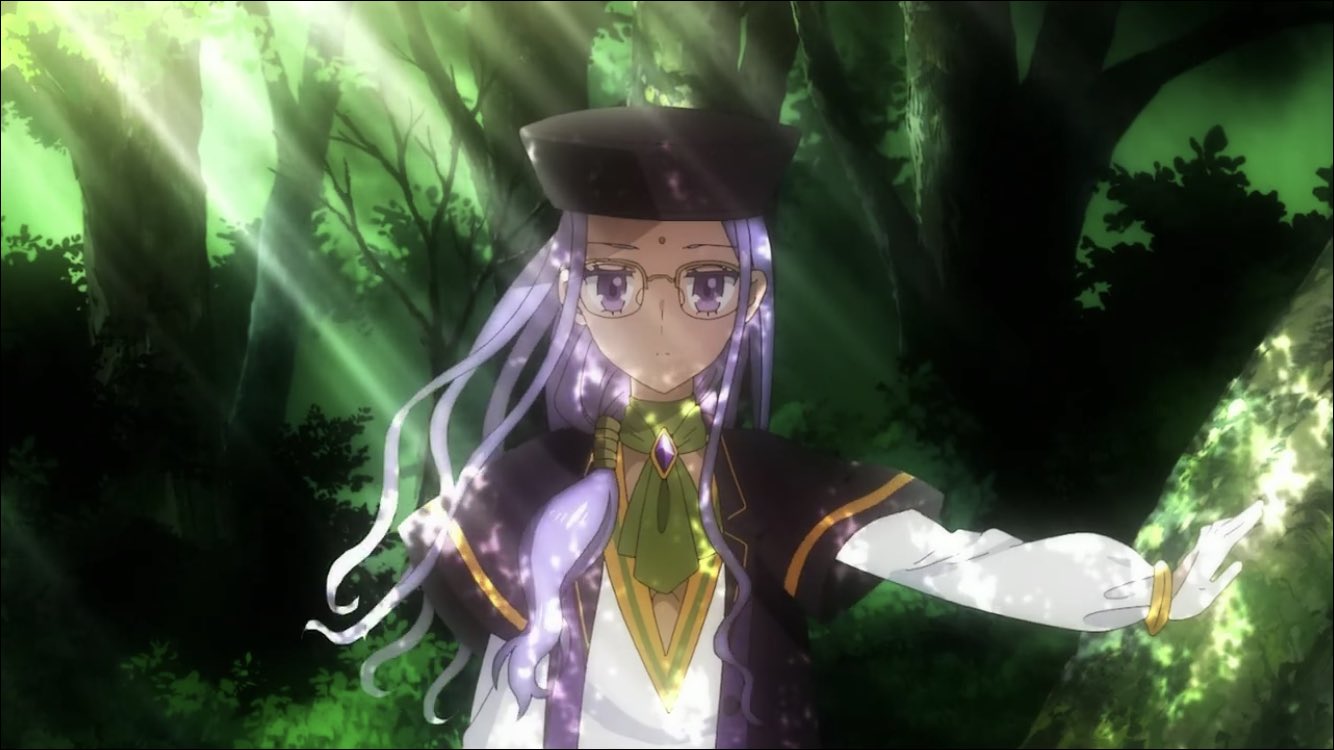 I like to call Last Encore a weird Dungeons & Dragons take on the Fate universe for its similar adventure style setup. On each floor that Hakuno, Saber, and eventually Rin climb to (or rather soar up to via magical elevator), the trio confronts 1) the floor’s master, 2) the floor master’s servant, and 3) a helpful ally (or tricky foe) who resides/is trapped on that floor. Each floor’s denizens offer a new lesson in character, survival, or how to live, and deciding who the party should ally themselves with or stay away from serves as decent entertainment.

Last Encore‘s master and servant pairs reveal very little about themselves, which is a crying shame considering that you can typically count on Fate characters as ALWAYS being some of the most interesting crew you’ll ever run into. Heck, much of this historical fantasy cast—Robin Hood, Francis Drake, and a certain red Saber—receive better backstory and development in Fate/Grand Order, and that’s a FREAKIN’ MOBILE GAME. 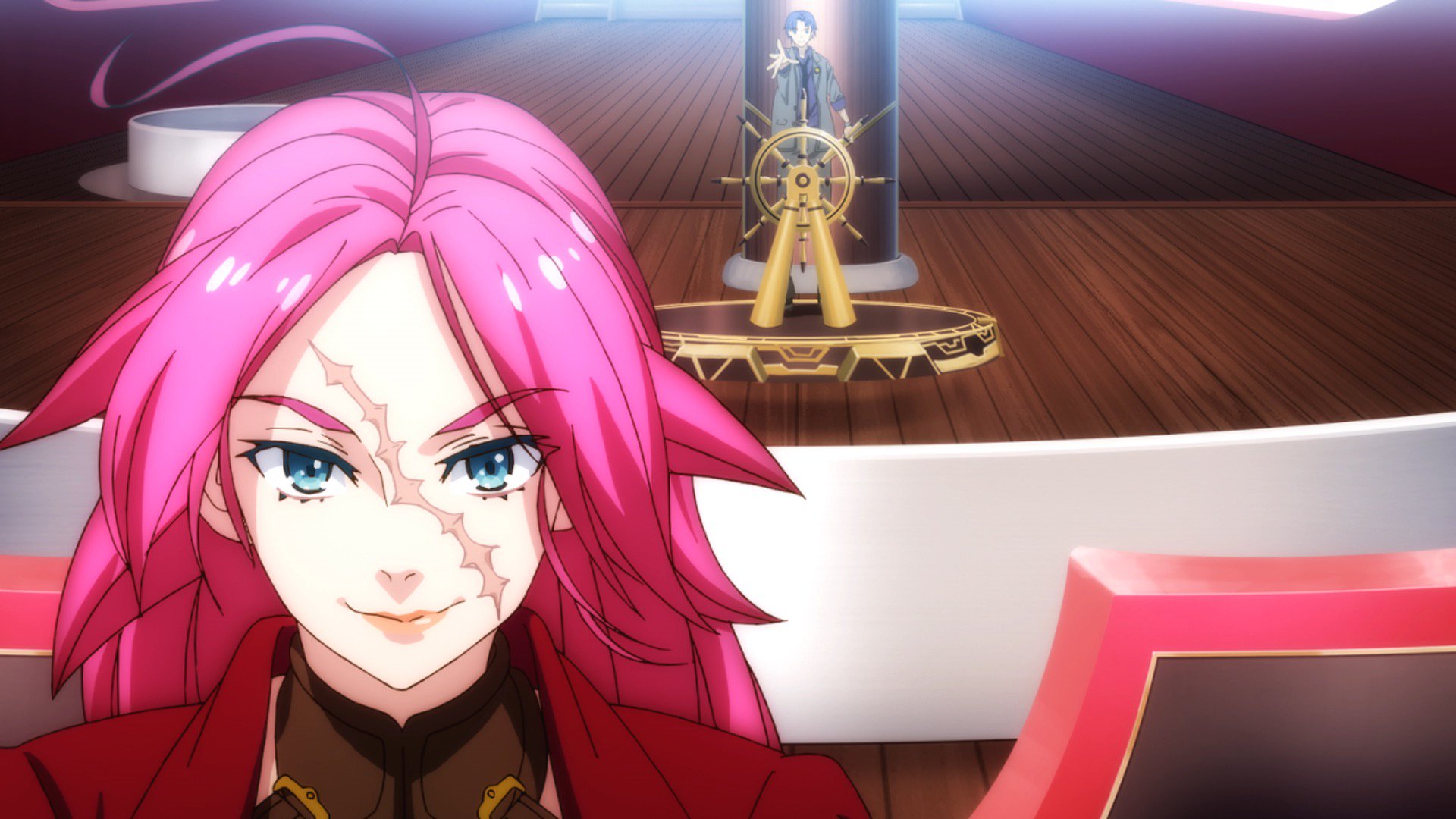 With so many characters encountered in such a short 10-episode time, it can be hard to remember who is who and what they do when you know that at the end of the episode, Hakuno and Saber will prevail and ascend to the next floor. As such, the other masters and servants NEED to be interesting, and sadly, the opposite happens since there’s not enough time for me to invest care. Philosophical as they may be, the interactions between characters in Last Encore are hollow, save for maybe one charismatic lass . . .

No Guts, No Glory!

Never does our red-clad hero proclaim this famous idiom, but boy does it typify her personality. To keep this review spoiler-free, we’ll just ride by the servant moniker. That said, prepare the “Umu!” counter, cause here’s our Maestro’s beloved servant! Unlike the others in this series, Saber is characterized quite well. Even reoccurring favorites like Rin and the not-so-much-favorite Shinji fail to truly grasp the viewer’s attention like Saber does. Charming, wise, experienced, and loves to show off her vast wealth and skill accumulated from former days of glory, Saber practically steals the show any time she gets the chance. She’s unapologetically boastful and confident, and her ridiculous remarks make her fun to watch. Shaft may promote her allure through annoying underskirt shots (or straight-up nudity), but we know the real reason she captures our hearts is because of her valor and chivalry in battle, as well as her playful charisma on the side.

I will admit, Saber really doesn’t change much over the course of their journey, but that’s not why she’s there. She’s Hakuno’s guide, his partner, and through her ideological dialogue, she mentally keeps Hakuno thinking in the right mindset—and from succumbing to his darkest thoughts.

Fate in the Hands of Another Studio

Though the [very few and short] fight scenes look splendid, Shaft captures the individual essence of each floor’s quirks and qualities even better through unique landscapes, backgrounds, and art styles (including a floor designed to recreate Madoka Magica‘s eerie cuteness). Though the environment helps craft Extra‘s story, proving on multiple occasions to be more interesting than its characters, the alarming number of rough transitions between fantasy and reality, past and future causes immense confusion and boredom. The plot is already such a jumbled up mess, and to place Shaft at the head of this project is both genius and a horrifically beautiful nightmare. Arguably, with all the random floating objects and unnatural physics, it’s “too much Shaft” at times. At least that lighting is gorgeous.

SIDE NOTE: I appreciate the endeavor to animate more of this massive franchise, but between an OK Apocrypha and now an even worse Extra, I can’t help but think Fate should be left not only to quality animators like the masters over at Ufotable, but also to its core writers. Shinbou excels at bringing the strange to life, but this sci-fi/fantasy adventure RPG style isn’t his strongest suit.

Lastly, Satoru Kosaki’s score left a brilliant ambiance where the dialogue often tangled itself up (probably helps that he’s no stranger to studio Shaft’s style, having done much of the Monogatari OST). Also, the OP “Bright Burning Shout” by Takanori Nishikawa has an uplifting shounen fight song vibe to it, while the ED “Tsuki to Hanataba” by Sayuri allowed the bittersweet moments in the series to shine.

For the Fans Who Wanted One Last Encore

Trailing the viewer along through the bizarre sounds like something Fate/Extra: Last Encore would be excellent at, but Hakuno’s narrative is simply boring. And while a degree of mystery helps keep the mind engaged and asking questions, come episode ten you’ll be disappointed by this series’s lack of a proper ending. As one would imagine, Hakuno and Saber eventually reach the top floor, but to what end? The story abruptly stops upon the elevator reaching floor seven, and though a 20-minute finale OVA awaits us this summer (oh my god), no one will care by then.

Ultimately, it’s all a real shame, as I was finally hoping to branch out of the same old Fate and see what all the hubbub of Extra was about without having to sit through the PSP game. Several elements like changing the character design, recruiting a different studio, and twisting the story to fit as an anime series, seemed right, but just fell apart by the end. Watch the beginning of this shoddy cyclical Fate adaptation and I’m afraid you’ve already seen the end. Perhaps this is my “roundabout” way of saying that you shouldn’t advertise yourself as the encore when those unfamiliar with the original haven’t even properly enjoyed the main show.

I should do what I am capable of. That is all anyone can do. — Saber

It’s hard to write a review about a show that I really wanted to enjoy, especially something from Fate. Nevertheless, I must be honest with myself here. There were moments of true beauty, in which the shot composition, character animation, dialogue, music, and emotion all synced together spectacularly. But those moments only made up a small part of this already very short adventure. Such is why I award Fate/Extra: Last Encore the “Breads” rating, and recommendation to pass on it unless you have played the game and are wanting to enjoy a “similar” story in anime format—to which I say, enjoy, Praetor!

I’d love it if you could sway my mind on this title, so let me know what you thought about it or this review down in the comments! Thanks for reading, and until next time, this has been