Chances are that if you were linked here from another blogger pal, then you might be new. To those first-timers, “Hi, I’m Takuto, welcome to my anime cafe!” For the OWLS blog tour’s first monthly topic of 2019, “Metamorphosis,” I wanted to take a look at one of 2018’s best shows (in my opinion), the most unusual tale of a high school boy who encounters many different teenage girls, each of which are struggling with a bizarre phenomenon tied to personal turmoil: the (in)famous Rascal Does Not Dream of Bunny Girl Senpai.

A brand new year means new beginnings and opportunities. We have a tendency to embrace the new year because it’s a time when we can start fresh. For this month’s topic, we will be exploring our favorite dynamic characters who undergo changes for better or for worse. We will analyze these characters’ transformations and how these transformations benefited or minimized these characters’ potential in becoming “great people/beings.” We will also use these characters as a way for us to reflect on our own lives and who we want to become. Lastly, we would like to say “Happy New Year, everyone!”

Much like last year’s “Revival” tour, January ushers in new beginnings and a fresh start for us all. Here’s to the first in a long line of wonderful months to come, and thanks Lyn for the prompt!

A brief, spoiler-free discussion on the 13-episode fall 2018 series “Rascal Does Not Dream of Bunny Girl Senpai,” animated by CloverWorks, directed by Souichi Masui, and based on the light novel series by Hajime Kamoshida.

Troubles in Youth, the Adolescence Syndrome

Also called “puberty syndrome,” this sickness of sorts rumored on the internet to be caused by sensitivity and instability during adolescence plagues young hearts and entangles several girls in weird experiences beyond the explanation of physics.

Sakuta Azusagawa, a second-year high school student, meets these girls that are experiencing this “puberty syndrome” over the course of one eventful year. The one to stand out the most, of course, is famous child/teen actress Mai Sakurajima, which he encounters in a public library wearing a bunny costume. Although he knows her to be a senior at his school, for some reason, no one else can see Miss Sakurajima in her scantily clad attire.

Mai Sakurajima isn’t the only one changed by Sakuta, though—energetic underclassman Koga Tomoe is stuck in an endless time loop until she confronts her inner feelings; Sakuta’s science club friend Rio Futaba has to deal with a doppelganger of herself running around; hardworking idol Nodoka Toyohama undergoes a sudden body swap with Mai-san, who turns out to be her sister; even Sakuta’s own sister Kaede is still recovering from her terrible past with adolescence syndrome. All the while, a figure from Sakuta’s past—his first love, Shouko Makinohara—makes an incomprehensible reappearance into his life.

Sakurajima was a child star, adored by all and a household icon to boot. But following a couple-year hiatus caused by her transitionary high school phase and a conflict with her manager (her own mother), the teen actress fell out of the public eye. She suddenly became invisible, and the Adolescence Syndrome amplified that literal meaning.

When going about “fixing” Sakurajima’s invisibility problem, Sakuta appeals to his super smart science club friend Futaba for advice. If anyone can believe him and break down the Adolescence Syndrome’s causes and cures, it’s Futaba. She postulates that the students’ collective forgetting of Mai-san was caused by the school’s atmosphere, and she makes the analogy of Schrödinger’s cat to explain how Mai’s existence cannot be confirmed by those who refuse to acknowledge her. Finally, Futaba proposes that if the atmosphere were to be shaken enough to awaken everyone’s memories, Mai-san’s life would return to normal.

With the school as the box and Mai-san as the cat, the Schrödinger’s cat tie-in helps to create a powerful metaphor for the change process. Unless we open the box and confront its contents, we’ll never know if the cat is dead or alive, thus it is half of both. Similarly, until we open up to others with our problems and allow each other to see why we are hurt, confused, or scared, we’ll never be able to understand one another, and thus our problems will prevail. 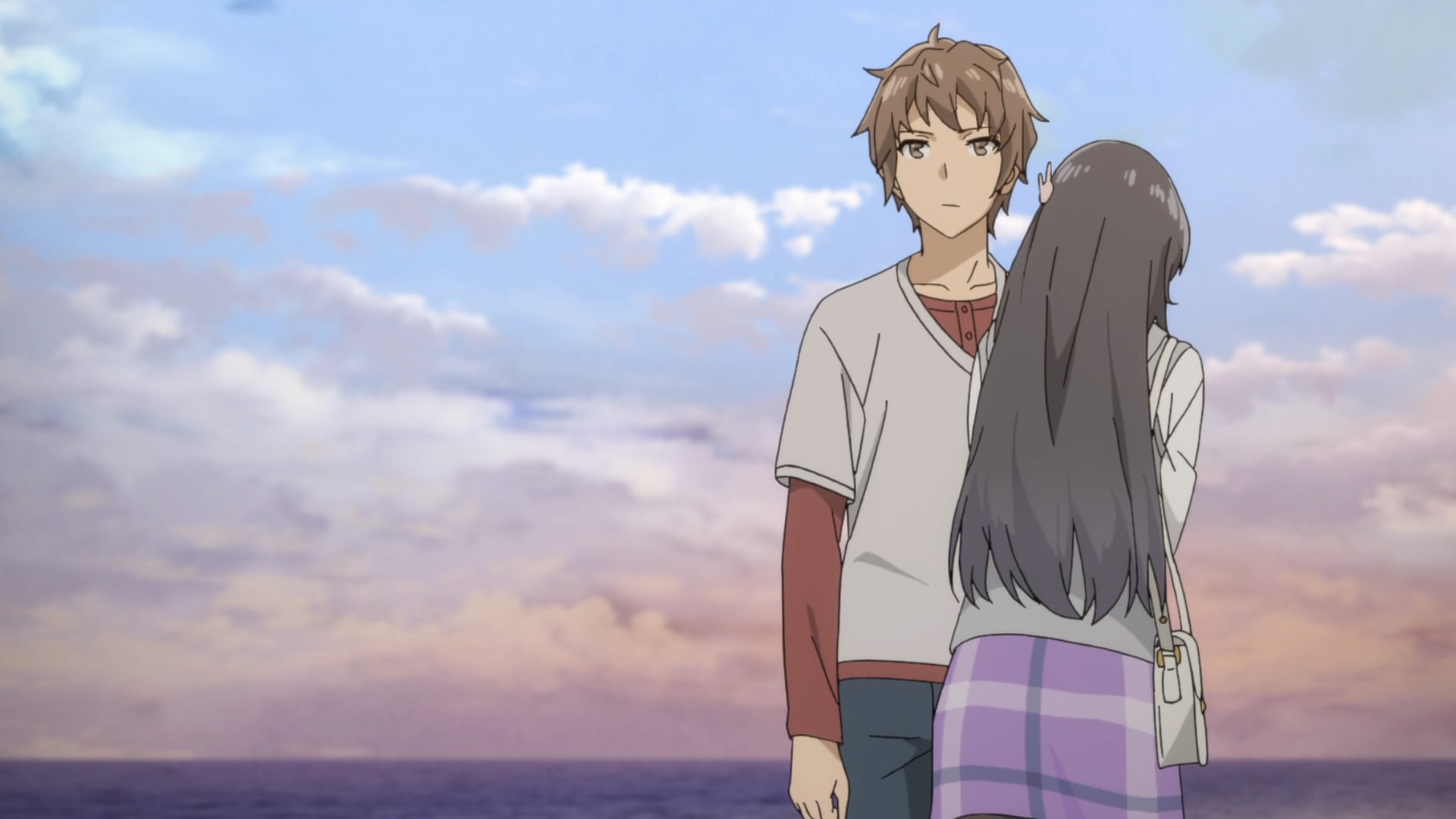 In this case, Sakuta persistently sought after people who knew Mai-san’s personal life, including her mother (and sister as well later on), to unravel the reason for Mai’s actions and the consequences pressed by the Adolescence Syndrome. So, what did he find? Sakuta urged Mai-san to return to her acting career. After all, she loves show business. But what made things different this time is that she wouldn’t let her mother micromanage her life. Instead, she’d plant her feet and make the choices she wanted to make.

Just like Futaba the science whiz found, unless the name Mai Sakurajima was put back into the student body’s mind in a way that broke the static atmosphere, nothing would change. Determined not to give up on Mai even though he, too, had almost forgotten her forever, Sakuta came up with a daring last-minute plan to make everyone remember. And while confessing the love of your life to every single person at school by shouting from the baseball field was a bit over-the-top, you can definitely call Sakuta’s efforts in making Mai Sakurajima visible once again commendable. Quite praiseworthy indeed! 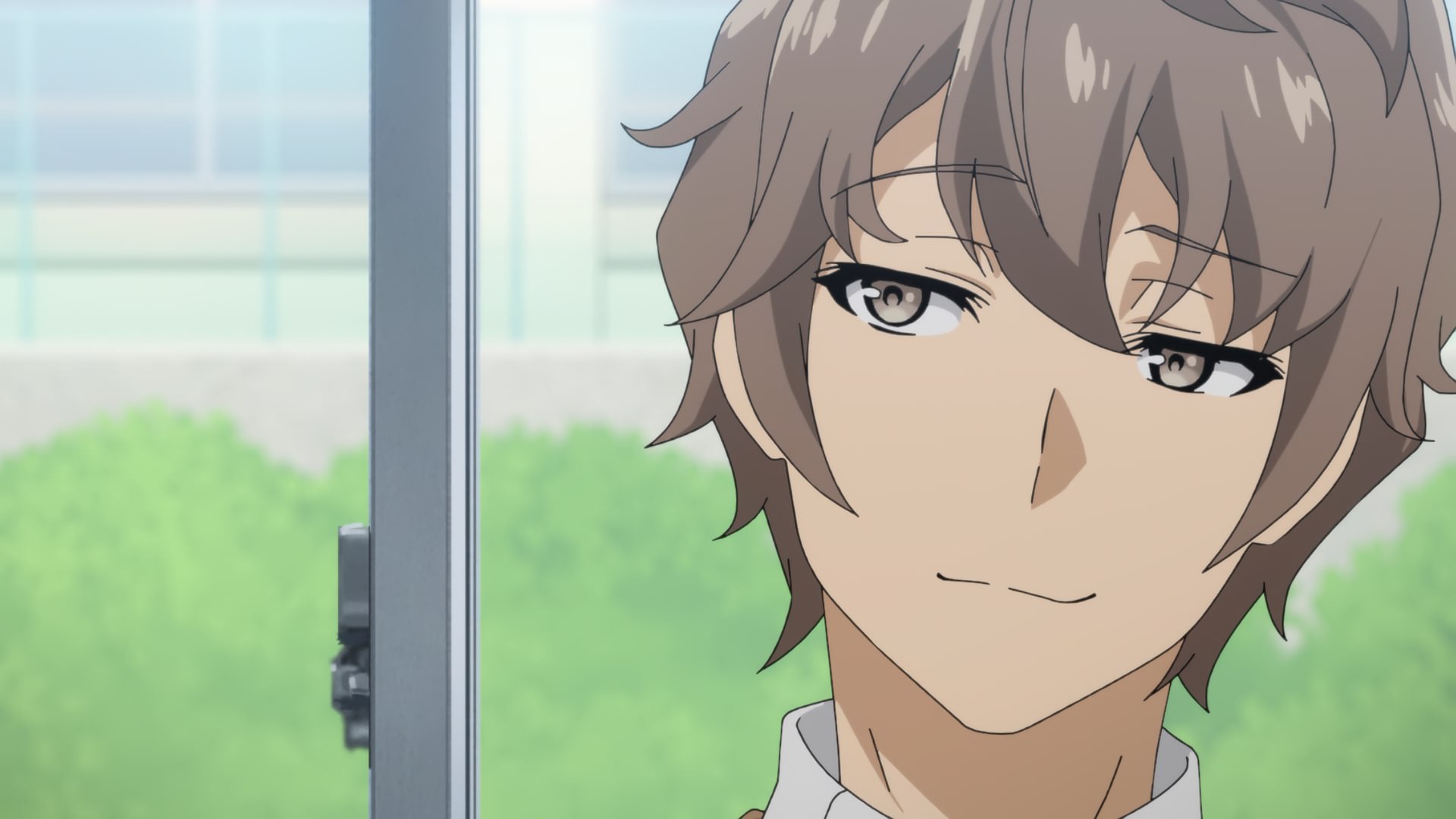 Change to Last a Lifetime

On the subject of metamorphosis itself, one characteristic that makes Sakuta Azusagawa stand out as a “hero” type protagonist is his conviction to not only solving each problem plaguing our cast, but his focus on making lifelong changes rather than little remedies to temporary issues. Like, he could have just told Sakurajima to get back into acting or “broke the atmosphere” from the start. Instead, he devoted immense time and energy to reconstructing Mai-san’s mindset geared towards a fresh, new perspective on self-confidence. Considering how that involves rebuilding a mother-daughter relationship, I’d say it’s no small effort whatsoever.

The same could be said about the other girls, though. For Koga Tomoe, he didn’t merely get her to confront her feelings—he willingly went along with her repeated time looping until she felt comfortable being honest about the nature of a one-sided romance. Sakuta helped Koga get her friends back, her reputation back, and all because she was a true friend to him. Even with Futaba, the problem wasn’t just with eliminating the doppel—it was about filling the hole in her heart with friendship, youthful memories, and some good, honest fun.

If there’s one big takeaway from Bunny Girl Senpai, it’s that deep down, we’re all just trying to keep the past out of the future, even if that means giving up on some of the things we love. It’s a romantic notion, don’t get me wrong, but that’s not how we should be living our lives—and Sakuta Azusagawa knows it.

Try as we might, we’ll never be able to completely let the past go. Whether its remnants haunt us in the present, like Mai’s longing to act again and Kaede’s desire to see the outside world, or our feelings keep us from moving forward, as with Koga and Futaba, there will always be something we hate about ourselves, something to regret.

What we can do, however, is do our best to live without said regrets—to think, act, and dream as if we are absolutely owning our lives. And if we don’t like how things are going, we CHANGE what we can such that we create the world we want to live in. The conviction to change is something that ultimately comes from within, and having close friends, even just a couple, can make this exciting way of living all the more within our grasp—we just have to be willing to reach out, change the atmosphere, and when we’re ready, open the box.

“No matter who you were before, how you look right now is who you are.”— Sakuta Azusagawa

Whew! This one was a bit of a cram watch, but I’m glad I finished it for a post like this one. Despite seeming like a surface-level rom-com with pervy jokes and toilet humor, Bunny Girl Senpai is surprisingly full of complex metaphysical concepts. Through its amazing and mature lead characters, Sakuta and Mai, it’s able to weave in these interesting principles with thought-provoking conversations and an air of scientific wonder. If you’re wanting a harem-ish anime that offers more emotional and intellectual challenge (or Bakemonogatari without the abstract directing style), give Bunny Girl Senpai a shot. You might enjoy the chemistry (and petty banter) between the leads more than you initially think! Plus, the voice acting is great, the animation is pretty, and OP and ED themes are absolute BOPS.

As for the cafe, Rascal Does Not Dream of Bunny Girl Senpai is certified “Caffe Mocha,” a show from 2018 that’s simply too awesome to miss out on! Seeing as how I focused this post solely a few story/character points, I’d be delighted to hear your thoughts on the rest of the series down in the comments.

This concludes my January 13th entry in the OWLS “Metamorphosis” blog tour. I tried going for a shorter, more condensed and focused form of writing for this OWLS post, so if you have any feedback on that I’d greatly appreciate it. Jack (The Aniwriter) went right before me and wrote about change and the liberation it can offer in Wandering Son, a series I really ought to watch! Now, look out for Megan (Nerd Rambles) with a post about everyone’s favorite tabletop pastime Dungeons & Dragons on Sunday, January 13th! Thank you so much for reading, and until next time, this has been