A few days ago, I took to Twitter following my rewatch of Tengen Toppa Gurren Lagann and tweeted this:

If you didn’t notice it sitting there in my collection post, I recently (and FINALLY) got a hold of the Gurren Lagann limited edition DVD set released by Aniplex of America several years back. It’s a set that I’ve wanted ever since I laid eyes on it—and that was before I even watched the series! You can only imagine my elation when I managed to get this OOP set for just $60 after haggling with the eBay seller for a couple days.

Now, as the title of this post indicates, I’m not going to review the series. Nah, I’ve already done that, and I still stand by everything I say in my review of Gurren Lagann. Rather, this is just to express my feelings about it now, three years after my first viewing. I like to think I’m a different person compared to when I first watched this series, and correspondingly, the show means different things to me now than when I first saw Lagann take flight in that iconic opening episode.

This isn’t anything new. Y’all are probably familiar with this show’s hype given how well it has been passed on from fan to fan. Heck, perhaps the only reason you watched it was because of someone else’s recommendation. And there’s a good reason for its constant spreading throughout the past decade. 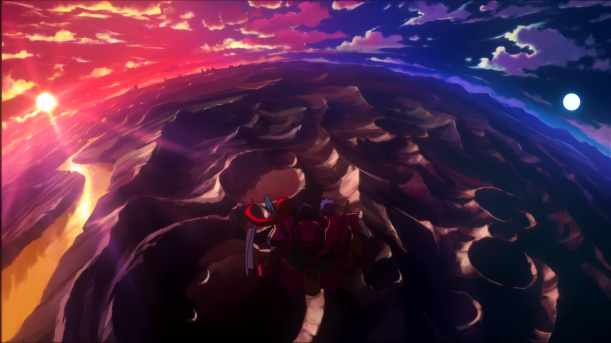 From Gainax’s off-the-walls animation to the high-octane soundtrack of ROW ROW FIGHT THE POWAHHH, Gurren Lagann delivers consistent quality, still holding up TWELVE years later as one of anime’s best-looking and best-sounding. I literally started CRYING once I heard “Libera Me From Hell” again in the finale, you guys. It’s the stuff of legends, I’m telling you. And with all this recent circulation of what it means for an anime to be “classic,” well, can I just say that whatever your standards may be, Gurren Lagann most certainly fits the bill.

And the ENDING. I can’t even begin to fathom the scope of Team Dai-Gurren’s galactic quest. From a tiny hole in the ground, to the Earth’s surface, the moon, and beyond the Milky Way. That’s just nuts! Since my rewatch, I’ve found myself sitting here just staring at the wall more and more, just trying to comprehend it all. What even is at the end of the universe? What other kinds of life are out there among the stars? Will we ever earn the chance to interact with such forces? I mean, this is a Gainax series, so I’m theoretically not supposed to risk a massive headache over trying to rationalize the impossible, but that’s half the fun, really.

According to Wikipedia, the universe measures 93 billion light years across. The freakin’ Universe. Proportionally, that’s how big Gurren Lagann‘s story is. Ok, maybe a bit of an exaggeration, but when you have a climax that ends in two cosmically sized robots (or energy beings at this point) hurling galaxies at each other, you know your story is kinda big. My point is, to discount any of the events of Gurren Lagann and label it as anything less would be, well, a lie.

In my review, I called Gurren Lagann “The Larger-Than-Life Story of Us.” Pretty title, right? That’s not simply me trying to be poetic, though. The series is all about evolution. Each and every day, we try to evolve—to push ourselves to the max—just to be better, EVEN IF only the slightest bit, than we were the day before.

The death of Kamina is one of many pathos the series evokes to inspire that drive to change, to improve. Within Simon, Yoko, and everyone else is this incredible swell of kinetic energy, a rawness that can only expressed through a studio like Gainax. Sometimes this spiral force spills over as a storm of chaotic emotions; other times it is love, a powerhouse which carries the potential to change this simultaneously rational and insane universe we live in.

Gurren Lagann is zany through to the very end. So much happens in such little time, it’s absolutely unbelievable. Lagann’s bombastic protagonists and equally bizarre antagonists thrust upon you a story that demands your attention as it dares to break through the heavens. It’s a weight that doesn’t have to be shouldered alone, however; the series has solidified itself as a timeless ode to the vigor of the human spirit, and a demonstration of the sheer audacity of the human race.

I’m not quite sure where I’m going with this post anymore, but I do know one thing for certain: the day we decide to forget this classic story is the day the anime community will lose a monumental part of its core—but not without gaining something new to fill its place. What that new show or shows will be, only the future us will know. I do hope we never give up on Gurren Lagann, but the inevitability of fate that the series itself wields might prove my wish otherwise.

So, going back to my desperate-sounding tweet, please, PLEASE never stop sharing Gurren Lagann with all your friends and the wonderful people of this community. Such a vibrant star should never lose its light, but as we too continue to change and evolve, sometimes we have to leave even the best and most precious of our memories behind.

I only hope that the great Tengen Toppa Gurren Lagann doesn’t fade from our hearts anytime soon.

When does a man die? When he is hit by a bullet? No. When he suffers a disease? No. When he eats a soup made out of a poisonous mushroom? No! A man dies when he is forgotten. — Kamina

I really haven’t done a post like this before, but I had some thoughts I needed to vent and didn’t know how else to do it. If you share the same sentiments about this beloved title, I’d love to hear them! Tell me your stories, I’ll listen. In fact, merely sharing mine with you again led me to the creation of a new category on my blog: the Revisited titles. Since I tend to rewatch stuff a bunch, it only felt right to finally honor the series that are worthy of such revisits!

The weirdest thing about all of this was that, even just a couple months ago, I didn’t even feel that passionately about the series. But as soon as summer hit—the exact same time of the year in which I initially watched Lagann—man, it just kicked on like crazy. I HAVE to watch Gurren Lagann again, I kept telling myself. So I did, and I bought it, too. If you’re strapped for cash, however, the entire series is available on Crunchyroll for FREE!

Anyway, thanks for reading my loose ramblings. It was quite enjoyable being able to get these thoughts out here. Now, I can finally move on. ‘Till next time!

23 thoughts on “The Scope of the Universe: Gurren Lagann Revisited”