A brief spoiler-free review of the standalone BL manga “Our Dining Table,” story and art by Mita Ori, and licensed in English by Seven Seas Entertainment.

Boys’ Love for the Soul

Despite his excellent skills in the kitchen, salaryman Yutaka has always struggled with eating around others since he was little. This changes when he encounters a hungry little boy named Tane and his much older brother Minoru. Eager to eat more of his tasty onigiri, the two brothers invite Yutaka over to teach them how to make his delicious food. Slowly, Yutaka starts developing an appetite for their warmth and acceptance around the table—as well as feelings for Minoru and his little family. This is the story of love that starts at the stomach, and gradually grows more heartwarming one meal at a time.

This slice-of-life shounen ai manga made waves in the manga community when it was announced for release by Seven Seas Entertainment. At the time, I wasn’t reading much BL, but even I heard about this highly anticipated title and was eager to pre-order my own copy the minute it went on sale. As a one-shot BL manga, Our Dining Table reads quick, closing out the story in just eight chapters. It even includes a short epilogue that, well, I won’t spoil for you. But it’s great, and it brings adorable closure to a story that I otherwise could’ve kept reading for decades.

To make the deal even sweeter, Mita Ori’s art is stuff to drool over. She draws food well. Very well. Too well. I grew envious of Minoru and Tane whenever Yutaka brought his cooking supplies over to their house. Right off the page, you can practically smell the delectable dishes they make together. The characters themselves are also drawn with a soft aesthetic to them, Tane in particular being the cutest little rugrat I’ve ever seen in manga! The way his eyes light up upon seeing whatever they’re having for dinner is an image I’ll never forget. I also love how Mita Ori used Tane’s childish stick-figure drawings as a transition to telling Yutaka’s backstory. Very clever and effective. 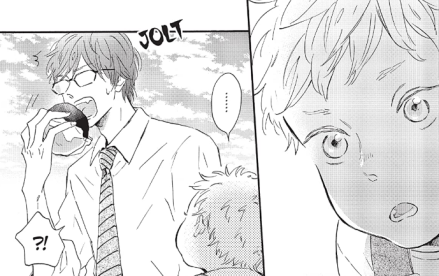 In both his personal and professional lives, Yutaka is a character who seems deeply misunderstood by those around him. People can be shallow and selfish, not to mention non-inclusive, and over time, being an outcast just becomes commonplace. We should always care for our friends and family, but things happen, and sometimes you find yourself eating alone at the dinner table each night. This is Yutaka’s life. Or perhaps, I should say was, as now he has Tane and Minoru in his life, and they really do change everything for him. Tane and Minoru aren’t just good company for Yutaka—they’re companions, the kinds you’d want with you your whole life, and I’m so glad they met.

Minoru and Tane aren’t without their sad family story either, though. Their mother passed away when Tane was just a baby, and Minoru has had to step it up as a parental figure to raise Tane in her stead. He loves his baby brother, but not everyone takes kindly to a 23-year-old who drags his 4-year-old brother with him wherever he goes.

It’s a good thing Minoru isn’t alone in his efforts, however; the brothers also have their loving father who makes a living as a potter, and their grandmother who looks after them by sending them off with nutritious meals whenever she can. Not everyone accepts or respects each others’ family lives, so the fact that Minoru and Tane can come from a place of understanding and accept someone like Yutaka into their home really is a delightful thing. It’s like seeing two lost souls find each other in the dark—their own glimmering light complements the other, and as they grow closer, they only radiate with a brighter glow and comforting presence. 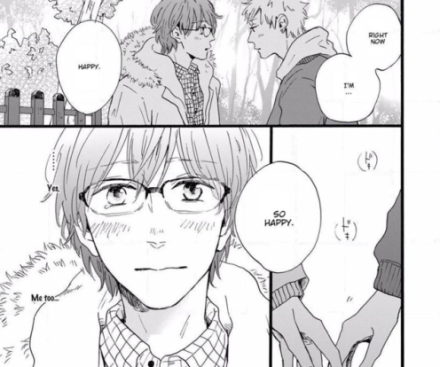 Mita Ori’s story about food, family, and friendship takes pride in the little things. Enjoyed are the quiet moments of tender living and merely existing with others, but celebrated are the joys of cooking and the sheer happiness that can come from cuisine when it’s made from the heart. Although Japan’s winter draws closer and colder, the bond between Tane, Minoru, and Yutaka only grows warmer and more wholesome.

Our Dining Table is just about the sweetest, most gentle foodie manga you will ever read. Yes, it is BL, but don’t let that label send your mind down the gutter. Through soft gestures, Mita Ori’s story is wholly dedicated to building meaningful bonds that capture the day-to-day life of two men from very different families, and how they intersect at the crossroads of food.

From cover to cover, this standalone slice-of-life BL manga promises to deliver pleasant vibes and positive energy, even when addressing the loss of a loved one. This is BL manga for the soul, and easily one of the best stories I’ve ever had the pleasure of enjoying. It is an honestly written manga with solely pure intentions, and however wonderful and filling the ending is, I assure you this—you will only be left hungry for more.

I’m so happy. So stupidly, totally happy. To think eating with someone could bring me this much joy. — Yutaka Hozumi

Guys, I’m speechless. Really, this is the fastest review I’ve ever written, and while it’s also one of the shortest, I can’t think of anymore praise that I can give this manga. THIS is what a “Cafe Mocha” manga title looks like. It’s not perfect, and it doesn’t need to be. The story, characters, and art style just have to speak to me in a way that I not only connect with but love unconditionally, faults aside. Sure, Mita Ori could’ve elaborated more on Minoru’s father’s job, their mother, or Yutaka’s job. But she didn’t need to—the characters feel alive enough as-is, and the story speaks for itself. I really, really loved this manga, and if you did too, please let me know your favorite part about this endearing little title! I honestly can’t recommend this book enough!!

We’re almost at the very end. Tomorrow, I will at last be diving into Yuhki Kamatani’s critically acclaimed Our Dreams at Dusk. Although it will likely not be a full series review (due to time restraints), I hope nonetheless that you will enjoy my final Pride Month post. Besides, I’ll probably return and do a full review anyway, just not in June. ‘Till then, friends, I’ll be looking forward to it!

6 thoughts on “Our Dining Table: Growing Closer One Meal at a Time || Review”