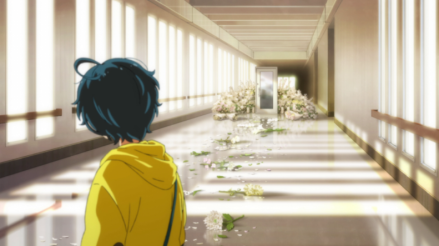 I’ve yet to finish simulcasts from one whole year ago, yet here I am signing myself up for more anime to consume. (*sigh* I’ll finish Smile Down the Runway one of these days!) Anyway, I took to Twitter the other night to see what you all were watching, and I woke up with tons of great recommendations to follow this season—thank you!

Since I’ve been out of the weekly watching game, I can’t remember how I usually write these posts. So, let’s go ahead and waste no time by getting to what shows I’ll be watching this winter 2021. ^ . ^

Attack on Titan: The Final Season

Obvious pick. Y’all should’ve seen this one coming. I’ve been loving AoT ever since I binged the first season over six or seven years ago, and that love has yet to wane. We’re already five episodes into this one, so I’m quite late to writing this post, but I’m still wondering how the whole story will wrap up in just 11 episodes. Like, how??? No, don’t tell me. I’ll find out soon enough. If you’re not following the final stretch of this epic-in-the-making, you ought to get on it, as MAPPA is knocking it out of the park with each passing episode!

Ahh, another one of my favorites returns for a sequel. I feel like anything that comes now in the story won’t be as entertaining to me as the first season was, but hey, we’re here for it. And Emma is back!! I’m excited to see what secrets unfold next about this terrifying world!

Such a weird title. But, after watching the first episode, it starts to make sense. I have a feeling that, along with the already mentioned titles on this list, this will be the show that’ll wreck me. We follow a couple young girls as they travel to the dream world to take down bullies and threats antagonizing other poor girls. It’s gonna get heavy—and QUICK—but I’m interested in the story and unique, if bizarre, directing style.

We’re into unfamiliar territory now in the sense that I haven’t seen the first episodes of any of these remaining shows. This next title features yet another pointless isekai start (thirty-something-old businessman gets hit by a car, gets reincarnated in a world of magic, yada yada), but this one seems to be going strong in the fantasy world-building element, and that makes me curious. I decided to pick this one up based on the few beautiful animation cuts I’ve seen on Twitter, so we’ll see how far it goes.

This’ll be a title that people will love to hate, if you know what I mean. Having come from watching other bottom-tier sports anime like DIVE!! and Cheer Danshi (and loving both), I think I’ll enjoy this one just the same. It’s a shounen-esque revenge plot which takes place on the ice. I know little else, but I’m sure you’ll hear more from me on it soon enough!

Did we save the best for last? Perhaps, as Horimiya was the talk of the town before it even became an anime. Given that I was planning to pick up the manga myself one of these days and give it a read, it’s funny to see it on this anime list. Supposedly, this is the must-watch of the season, especially for fans that typically watch or read shoujo manga and anime. And YES, I am excited to watch it!

Unless I decide to go back for seconds on anything, this is the list of shows I’ll be following here at the start of 2021. As always, there’s lots to enjoy this season, so I won’t be able to watch everything. Still, I’m sure this’ll be enough to keep me entertained for the next few months. Let me know your thoughts on any of these titles, and definitely share what you’re watching down in the comments below! Thanks for reading, and till next time!