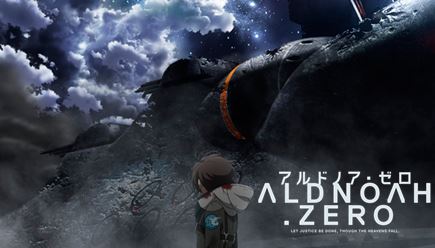 One of the most controversial anime to come out these past couple of seasons finally comes to a close. But who comes out on top? Slaine fans get “Slained” and you Inaho dogs, just sit there and don’t smile. Nah, I’m just kidding! Caution: Spoilers for both seasons are present!

Picking up from the first half’s suspenseful ending, silent protagonist Inaho undergoes a surgery that connects some sort of calculating machine into his shot eye. No. He’s not dead, but the thing’s pretty cool. The Deucalion suits up for battle, and while the Terrans celebrate their temporary “victory” / prepare for any Martian activity, the Martians step up their game.

As Slaine, the Terran-born Vers soldier accompanies Count Saazbaum, who seeks revenge on Earth, an “accident” occurs and Saazbaum is killed. In an attempt to restore the Vers Empire and reclaim the blue planet, Slaine ascends to Count status and primitively the throne with a new gal who literally came out of NOWHERE, wheel-chair-bound, lavender-haired Princess Lemrina.

Rather than stand by twiddling their thumbs, the Terrans take the fight to the Martians, and an all-out space war rages! But the fate of the two races ultimately resides in Princess Asseylum Vers Allusia, whose preserved body in Martian Custody slowly reawakens . . . a bullet to the brain and she didn’t die either. Damn.

I’ll admit – I really enjoyed the first season, especially the end. Sure the plot and characters went downhill after the first 6 or so episodes, but it kept me thrilled to see what would happen next.

Season two is a bit different, however. First the pros. The show starts stronger than ever before with the inclusion of Asseylum’s sister Lemrina was probably one of the series’ best moves. While my favorite moments in the first season were obviously the glamorous, high-energy robot battles, season two’s were the drama talks among the Martian hierarchy. The manipulative Lemrina is an essential part of Slaine’s motive for justice, for she can change her appearance to mirror Seylum’s, masking any idea that Seylum had died. In turn, she is a thorn in his side, desiring his affection and secretly wishing that she could replace her comatose sister for good. Though these additions couldn’t save the series in the end, the spicy and dramatic relationships really turned up the emotional dial for this sequel – I only wish I could’ve see more of Lemrina.

Now the cons. The plot is an obvious wreck. Poor pacing, bad balance of characters, and a much different (lesser) tone than the first half resulted in a LACKLUSTER ENDING. Seriously, after two seasons of killer alien robots and explosive combat and emotions – no one died. Not even any of Inaho’s friends took the fall. I’m not saying that death is a good thing in anime; it’s simply that ALDNOAH.ZERO went through a lot of trouble and no one bit the bullet.

Overall, season two values a softer and more emotional approach to a very different story. While the franchise still retains its innumerable plot holes, lacks proper character attention, and frankly sh*ts on its own design, A.Z is still passes as a decent tragedy.

Characters, what’s to say? The sequel drops any supporting Terrans, so you can all forget about Inaho’s friends. Well, maybe besides Inko and his sis. That Marito guy doesn’t even get any follow up to his problems, whatever they were. Just poor balance of characters.

More of the Martian counts are introduced as distinct personalities, which ties back to one of the greater things this sinking ship of a show offered. Their intense qualms regarding loyalty to the almighty dick Slaine made for more interesting views.

Inaho is still pretty meh. He still swoops in to take out the Counts, calibrating all of their weaknesses and eliminating them in the last second. His eye causes him suffering, but he endures the pain for the computer’s benefits. One part of the show really startled me, and that was the smooth transition from Inaho to the eye “talking” to Seylum. Supposedly, the eye grew a consciousness of its own or something cause it carried out Inaho’s last words to the Princess. Just goes to confirm Inaho is nearly no different than a robot, cause I hardly noticed the shift in dialogue – and they even stated it.

It felt really weird when Asseylum woke up from her coma, as if Lemrina’s whole world came crashing down on her – and it kinda did. Too bad Asseylum wasn’t as near as complex as Lemrina, for she remained the same old boring, dutiful Princess. However, she grew some balls in the end and surprised everyone. When that happened, A.Z woke up from its nightmare and ended things right then and there.

Slaine was by far the most developed, but that wasn’t necessarily a good thing. He went from being an obedient servant of the Vers monarchy to a stubborn, stuck up b*tch. I guess it proves once again the power is greed trope. I can distinctly recall him saying that he had pretty much started down the road to hell, and that there was no turning back. His decisions make absolutely no sense; he does retarded stuff, and in the end gets blamed for everything that happened. Humanity will remember that the whole war was because of him. Like . . . wut?

A-1 Pictures’ animation didn’t drop in quality whatsoever. It’s still pretty solid, so if you’re one for the Kataphrakt CGI fights, then you’ll be satisfied. Characters are colored in lighter tints to contrast the black nothingness of space. I love the characters and their expressions! Also, the Martian Kataphrakts are freakin’ cool, even if their design makes little to no sense.

The OP “&Z” by SawanoHiroyuki[nZk]:mizuki mirrors the softer appeal the anime presents while the ED “GENESIS” by Eir Aoi, to me, captures the downfall of Slaine and the ultimate tragedy of the show. Beautiful.

Hiroyuki Sawano continues to impress with touching, somber piano solos and full orchestra tracks. Though the small OST is repeated over and over again to where you can predict what song will play next, the tracks are still great, supporting the mood admirably. His attempt to milk what he could out of A.Z wasn’t in vain; there are several touching moments centered around Slaine, Asseylum, Inaho and Lemrina that were particularly beautiful despite their relevance to the plot.

If you watched ALDNOAH.ZERO’s first season, then go ahead if you haven’t already and finish this thing off. To others, I would avoid this franchise in general for its inconsistent plot, poor distribution of character development, and at times nonsensical scheming. The show is not bad, it’s just messy, and I would only watch it if you are searching for high-energy, well-animated, robot space combat or political drama, though do realize that that part eventually goes down the drain. I’m glad ALDNOAH.ZERO is over. It’s just a shame that the writers couldn’t learn from their mistakes – the show had A LOT of potential.

I guess that’s it. THE ANIME DOESN’T END HORRIBLY WHATSOEVER. If you watched A.Z, please leave a comment below with any of your thoughts. I’m a bit lost when it comes to this show. If you had similar musings, hit the like button for more anime reviews. Until next time, this has been