Chances are that if you were linked here from another blogger pal, then you might be new. To those first-timers, “Hi, I’m Takuto, welcome to my anime cafe!” For the OWLS blog tour’s eighth monthly topic of 2019, “Believe,” I wanted to spend some time revisiting one of Kyoto Animation’s most fun yet often overlooked titles: the incredible, the amazing Amagi Brilliant Park!

The fire that happened at the studio is indeed a tragedy. We pray for the lives that were lost in this tragedy and the families that are suffering at this time. Fires may be dangerous, but there are flames that burn within us that spark passion, hope, and belief in ourselves.

I think it’s so wonderful that bloggers, YouTubers, and fans in this community have been reacting to this tragedy by sharing what they love most about the studio and its people. Although my words will not likely reach them, I hope our collective sentiment does, even it’s just to say a heartfelt “Thank You.” Lyn, thanks for this prompt!

A brief discussion of the 13-episode fall 2014 anime “Amagi Brilliant Park,” animated by Kyoto Animation, directed by the late Yasuhiro Takemoto, and based on the light novel series of the same name by Shoji Gatoh.

A Land of Magic and Fun

Seiya Kanie is one good-lookin’ high school dude, and boy does he know it. Of course, this smart yet extremely narcissistic guy would believe that the quiet and beautiful Isuzu Sento has invited him on a date at an amusement park (even if she threatened him at gunpoint to get him there). His expectations are shattered when the bus pulls up to a run-down facility, where Seiya discovers that the titular Amagi Brilliant Park is running itself into the ground.

An employee herself, Sento takes Seiya through various disappointing attractions. Eventually, she brings him to see the owner of the theme park, Princess Latifa Fleuranza, who reveals to Seiya that Amagi is no ordinary amusement park. That very sentiment wins him over when Latifa bestows upon Seiya magical powers of his own. To further prove her point, she tells him that many of the park’s employees hail from her kingdom of Maple Land, and that they are mysterious magical beings who are nourished by animis, or the energy created by people having fun.

Because of his impressive intellect and natural charisma, Sento recruited her classmate not for a date, but to become the park’s new manager. Why so desperate? As per the park’s land-use contract, Amagi has less than three months to meet a quota of 500,000 guests. If they fail, the park will be closed for good, and all of its employees will have to scrounge up jobs—and a living—elsewhere. Entrusted with the hopes and dreams of this far-off enchanted land, Seiya declares he’ll use his many skills to bring Amagi back on its feet within this three-month span, or else watch it crumble to the ground.

Amagi Brilliant Park is a fun fantasy romp that balances comedy and drama surprisingly well. You come for the stupid gags and lewd humor, but stay for the heartfelt character moments and the blood, sweat, and tears that come with hard work. Although the end wraps up a bit quicker than I’d have liked, this is ultimately just an adaptation of a much larger story.

Meet the Cast of AmaBri!

Seiya Kanie’s time at AmaBri challenges his character in a sort of redemptive way. As he comes to know the quirks of the park and its staff, he realizes that his boundless narcissism won’t help him through all situations. Sometimes he needs to lend a hand; other times, an ear will do just fine. That doesn’t stop him from gazing at his own reflection to remind himself of his dashing good looks.

Our broad-shouldered, dead-panned Isuzu Sento is our female lead and Seiya’s partner in crime. She means so, so well by her actions, but her history as one of the Princess’ soldiers from their Maple Land days has whipped her into a prim and proper manager’s secretary that just can’t take a joke. Many of the park staff have a love/hate relationship with Sento, as her soldier instincts lead her hand to her magic rifle to solve any problems with rascally customers or staff. As she watches Seiya and learns from his diplomatic skills, however, Sento’s feared reputation slowly dissipates, as does that expressionless face of hers.

The majority of AmaBri’s other staff are magical misfits from Maple Land, from cute talking sharks, digger moles, and dragons, to an anthropomorphic wrench and . . . a globe? Yeah, they’re a buncha of weirdos for sure. But the true stars of the park are the biggest freaks—and in the most unconventional way. Who knew a perverted cat, a foul-mouthed sheep, and an overly aggressive, umm, Moffle (?) would be Seiya’s biggest headache.

Seriously, Tiramie the flower fairy, Macaron the music fairy, and AmaBri’s sweets fairy mascot Moffle are an absolute HANDFUL, but man are they THE trio of goons. Most of the series’ hilarious moments come from Macaron’s laziness (a true artist must “take time off” if they’re not feeling inspired), or Tiramie’s perverted gawking and awful facial expressions. Overall, such a fun, endearing cast, even if their main purpose is just to put a smile on your face (kinda like . . . a theme park’s staff). 😉

KyoAni IS the Magic of AmaBri

Animation lies at the core of anime, and like any comedy series, delivery is everything. Timing hilarious visuals with outrageous sounds is the goal with these kinds of shows, and in regards to humor, Amagi Brilliant Park is one of the bests out there. For me, much of Tiramie and Macaron’s slapstick comedy landed so hard I was left laughing hours after the episode ended. Not only do their faces twist in wacky, grotesque expressions, but the dialogue itself is absolutely hysterical.

Seriously, the dub script is GOLD, and the delivery by the actors has gut-busting potential. Can Adam Gibbs just voice every KyoAni male protagonist from now on, because he just has that perfect blend of charisma, charm, and awkwardness down pat. He can be goofy, but also attractive, which fits very well with Seiya’s personality. Molly Searcy’s Sento is much stiffer than what even the writing makes her out to be, but it grew on me throughout the series. Other fave performances included the dynamic duo of Tiffany Grant and Allison Keith as Moffle and Macaron, respectively. Hearing two of Eva‘s most iconic characters as giant stuffed cussing mascots was just awesome beyond words.

Despite how perfect I thought the anime’s comedy skits were executed, I actually found the drama moments to land even better. Moments of bitter pain or sudden realization are captured perfectly by not only the characters’ facial expressions, but the space they inhabit. When Sento and Seiya were deeply pondering how much one meant to the other, deep blue shadows are cast over a blinding orange sunset, filling the screen with contrasting colors and conflicting emotions.

And of course, the all scenery is just beautiful to take in. The bright-colored landscapes work well with the cheery, cartoonish character designs. Plus, Seiya and Sento, as well as the other “human” characters, look very pretty—the KyoAni standard. In fact, had any other studio adapted AmaBri‘s story, I can bet you money that it wouldn’t have turned out as nearly as magical and fun as it did here with KyoAni. 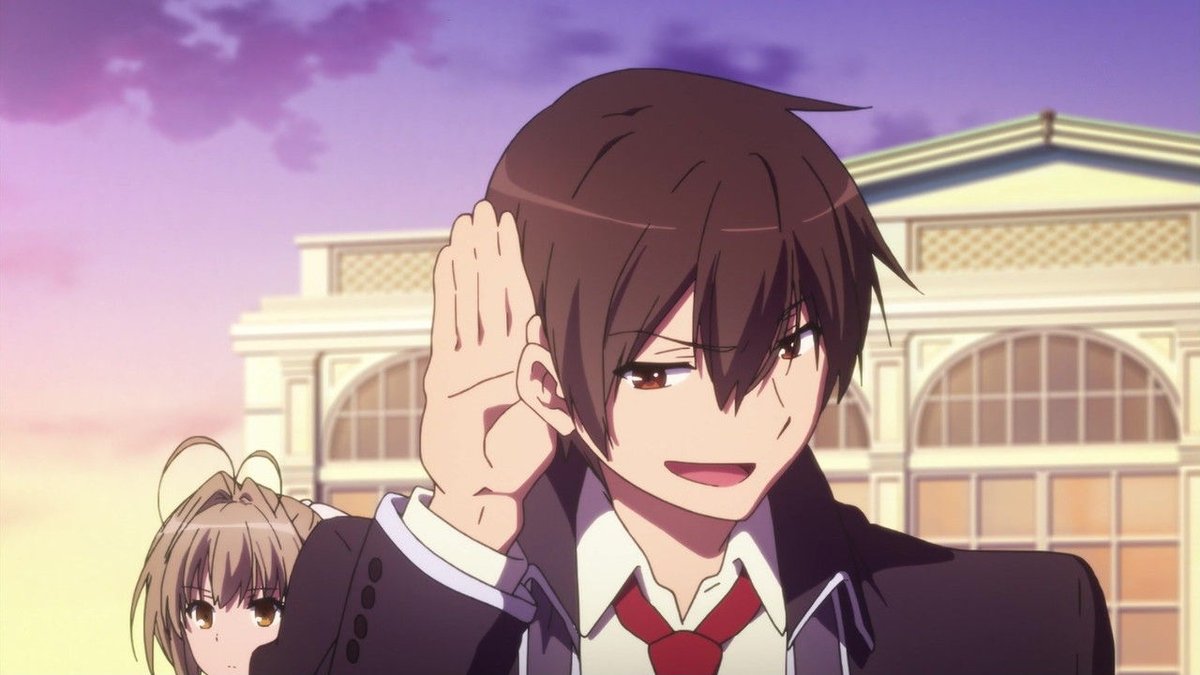 On the audio side of things, Shinkichi Mitsumune’s soundtrack supports all the laughs and the feels with incredible emotion. And if there’s a song more positive and upbeat than AKINO and bless4’s OP “Extra Magic Hour,” I haven’t heard it yet!

The humor hits home, and the drama is very much respected by the late Yasuhiro Takemoto’s sensitive directing style. Sure the story and characters were written long before the show was created, but Kyoto Animation, YOU were the ones who put the real magic into this series, and it shows with every laugh I gave and every tear I shed while watching. You are the magic that saved AmaBri, and I honestly can’t celebrate my enjoyment with this series enough!

Dreams Only Come True if You Believe

Amagi Brilliant Park is a story about a boy who prides himself above others, thinking that he is good at everything, and that same boy’s struggle to help those that don’t believe in themselves become proud of their own abilities. It’s a story about give and take, hard work, and at the end of the day, finding the fun in what you do for a living. Seiya may manipulate and play on the staff’s whims and emotions throughout the series, but a strong sense of trust always lies at the core of his plans.

Seiya’s magic doesn’t stem from his newfound power—it comes directly from his belief in the resilience and strength of all the people of Maple Land. Seiya makes an investment in these people, pouring all his time and energy into transforming the workers of AmaBri into employees worthy of their gifts.

Seiya draws out the inner passion for their work, and with a little faith, is rewarded with the park’s continual success. It is a belief driven by transformation and grounded by trust. Trust in Seiya’s process, and you, too, will enjoy one of—if not—Kyoto Animation’s most fun creation they’ve ever given us.

If you wanna make people dream, you’ve gotta start by believing in that dream yourself! — Seiya Kanie

At LAST, I’ve written the post about AmaBri that I’ve been wanting to ever since I saw it a couple years back. Again, I’d like to extend my thanks to the lovely Kyoto Animation for giving us the gift of fun all wrapped in a pretty little bow—I hope I was able to do the series justice! Amagi Brilliant Park is one of the studio’s most underrated series, and I hope some of you will decide to watch this hilarious and heartwarming “Cake” title! To those few who have actually seen this gem, you ought to let me know your thoughts!

This concludes my August 10th entry in the OWLS “Believe” blog tour. Mel (Mel in Anime Land) wrote about Free! and Tsurune, two of my favorite series by the studio, that you can enjoy right here! Now, look out for Scott (Mechanical Anime Reviews) also with a post on Tsurune (ahh, all the love!) tomorrow, August 11th! Thank you so much for reading, and until next time, this has been