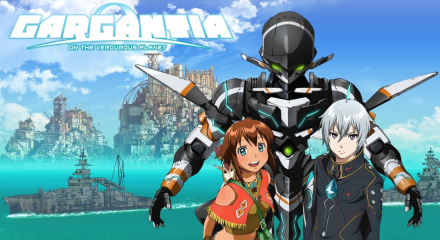 A brief spoiler-free review of the 13-episode spring 2013 anime “Gargantia on the Verdurous Planet,” animated by Production I.G, directed by Kazuya Murata, and based on the original story by Gen Urobuchi. This will also include special OVA episodes 14 and 15, as well as the two “Far Beyond the Voyage” OVAs. 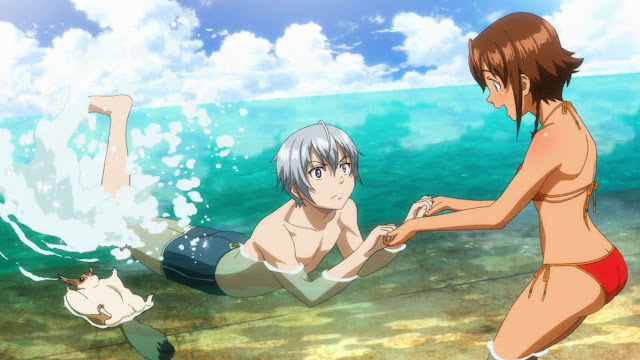 Awakening on Gargantia, the Island of Ships

Far into the future, most of mankind has fled Earth to expand into space, and the Galactic Alliance of Humanity is founded to guide exploration and ensure the prosperity of the human race. Humans soon discover a threat lurking in the dark seas of space, however; strange squid-like creatures called the Hideauze begin terrorizing human existence, resulting in a longstanding interstellar war to prevent humanity’s extinction.

Ensign Ledo of the Galactic Alliance, age 16, leaps into battle against the enemy as per his calling. Armed with Chamber, an autonomous robot intelligence system which resides inside his mech, the Hideauze shouldn’t have stood a chance against Ledo. Unfortunately, Ledo is separated from the Alliance and, in a horrific twist of fate, is flung into the far-off reaches of space, eventually to crash land on a planet submerged in water.

On these endless blue-green waters, Gargantia—a large fleet of scavenger ships comprising a sprawling metropolis in itself—salvages Chamber from the depths of the ocean thinking that the mech must hold something of value. Unknown to the crew, Ledo sneaks aboard the ship and captures a young messenger girl named Amy as hostage, but Ledo quickly comes to find that the people of Gargantia aren’t as dangerous as he initially surmised. Faced with uncertainty and separated from his comrades in the Alliance, Ledo struggles to seek newfound purpose on the blue planet. As some the loftier citizens of Gargantia eventually warm up to the space man, Ledo slowly realizes that there is more to a soldier’s life than missions and assignments. But just as he becomes acclimated to this foreign lifestyle, what lurks deep within these cerulean seas starts to bring to question the foundation of this oceanic world.

The coolest thing Gargantia has going for it is easily the titular ship fleet itself. In shows or games that are set near the water, I’ve always found village life to be quite appealing. Gargantia is no exception. If anything, had I watched this anime back in 2013 when it aired, I probably would have loved it a lot more than I currently do. Unfortunately, I am older now, and a collection of ships bound together by giant metal cranes and locks doesn’t excite me as much as it would have the old me. Still, a part of me feels like I was always meant for the seafaring life, to which Gargantia invites me to explore. 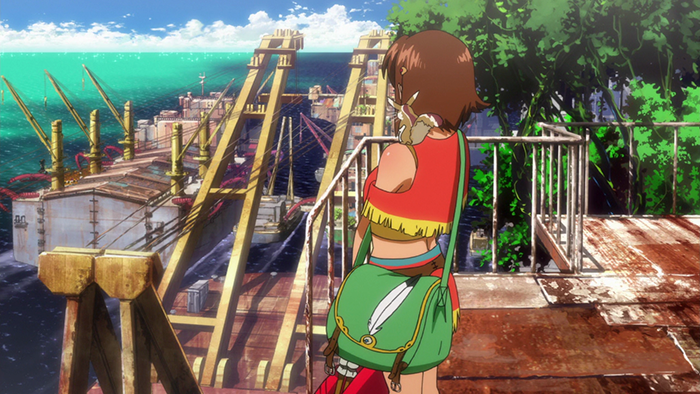 Chilling at its Own Pace

The first six episodes are spent crafting this culture-heavy fleet and its peoples through a slice-of-life narrative. We are given a tour of the fleet through a few side stories. Although they help to explain what they do, how they operate, and how each person—no matter the age or occupation—plays a critical role in Gargantia’s survival, some of these stories are admittedly boring and predictable. For a sci-fi action adventure series, Gargantia chills at its own pace, merely riding the waves until the exciting finale. But I kind of like that about it.

Meanwhile, the second half delivers the climax of the story, along with several intriguing plot twists which help facilitate interest after a relaxing but lukewarm first half. None of the big reveals feel cheap; in fact, it’s just the kind of thing I’d expect from Urobuchi’s phenomenal writing, even if the thriller vibes are occasionally lulled by the slow-moving nature of the story. Urobuchi always delivers incredible stories about the darker sides of humanity, and while Gargantia is lighter than most, that’s not to say it won’t leave you gasping “No freakin’ way” a few times.

The People of Gargantia

I’m quite divided when it comes to the cast. As a protagonist, Ledo is great. His gradual development from cold galactic soldier to helping friend is nicely done, and Alan Lee captured the vocalic change from curt, rigid pronunciations to fluent, passionate statements believably well in the English dub. Our resident “hot guy’s” struggle would have been futile without Chamber, however; unlike what you’d expect from a pilot assist AI, Chamber isn’t afraid to sass Ledo around when he needs the encouragement, and Matthew Mercer was a perfect fit for this rather intelligent and resourceful “tin can.”

But I can’t give the same praise to the rest of the people of Gargantia. While Amy the messenger girl (voiced by the ever-cheery Cassandra Lee Morris) is the supposed main heroine, she merely functions as a tool to unlocking Ledo’s inner humane side. The well-endowed pilot Bellows lives and breathes the salvaging life, but her character just as well acts as a guide for the main cast. 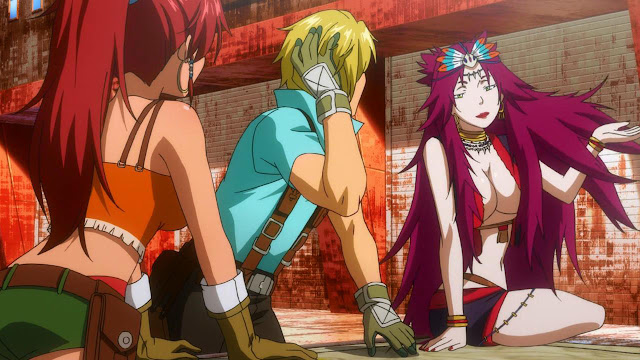 In the same regard, pirate queen Lukkage is a fun Team Rocket Jessie-like character to have around, but her little screentime isn’t enough to fully appreciate her extreme levels of bad-ass. (You’ll definitely want to watch the OVAs to see the Queen in action!) For other antagonistic presences, having the devilishly suave Karen Strassman as Striker is an absolute joy. But oh man, let’s not talk about Pinion, the human epitome of DICKHEAD. Seriously, the guy has no respect for anything!

It’d be a shame not to mention the fleet commander’s daughter, Ridget, as one of Gargantia‘s best and brightest. She works SO hard to live up to the immense role thrust upon her, and I just really enjoyed watching her backstory unfold throughout the series’ run. Strong-willed, passionate, and always looking out for the greater good of Gargantia, Ridget—above everyone else in the cast, arguably including Ledo—shines as the fleet’s most-developed character.

From an art and animation standpoint, Production I.G beautifully encapsulates “island life” on Gargantia through its towering structure of rusty, paint-chipped housing and overwhelming marketplace vibes. It’s just such a charming set piece, really. And although it may be marketed as a mecha anime, Gargantia is pretty laid-back, allowing Chamber to strut his usefulness in performing ship tasks in the first half and finally showing off his explosive capabilities in the last couple episodes. Also, at the very least, we should acknowledge the Yunboro as the most practical-looking mech out there, even if not the prettiest. (Chamber looks fantastic though, love his rounded shape.) As a whole, the art is rich, vibrant, and colorful, and the animation is consistently top-notch, particularly so with those endless green seas.

Taro Iwashiro provides a great soundtrack befitting of the “adventure” label, as he’s able to effectively balance island life with Ledo’s soldier strife. Also noteworthy in the sound department is how ADR director Tony Oliver and the crew at Bang Zoom! established the differing language portrayals. Ledo and Amy are separated by hundreds of light years, after all, so it only makes sense that their languages would different. I’m not sure how it was done in the original Japanese, but made-up languages are always fun to listen to in English, and Gargantia is written such that this constant dialogue swapping isn’t distracting in the least.

Seas of Possibility, Skies of Freedom

Contrary to the high intensity repertoire the mecha genre is known to cater, Gargantia takes the back seat and explores the isolation and ostracism of a mech pilot on foreign soil—or a fish out of water, if you will. It’s a story about finding purpose after a big change in one’s life, and how to adapt to unfamiliar circumstances. Most of all, however, Gargantia is about family and belonging, and what it means to be human in a world where the very definition of the word has been obscured by a dark past.

Between the gorgeous animation, creative concept, and interesting plot, Gargantia may be exactly what you’re looking for if you seek a short sci-fi journey. Oh, and don’t be turned off by the mechs—they look great, and the finale in particular stands out for its incorporation of the ideological feud. Although some of its characters may rub you the wrong way, Gargantia is blessed with strong direction and themes. So, answer the call for adventure—raise the sails and set out for those shimmering jade seas. 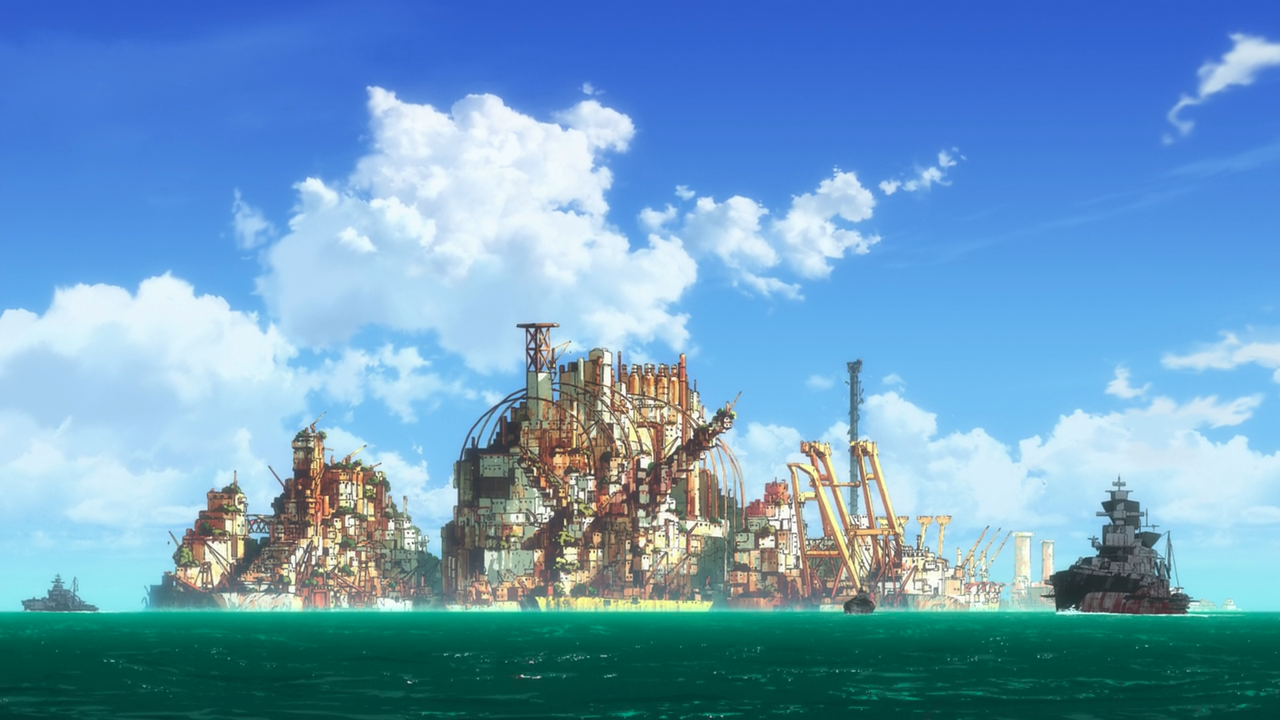 One who abandons thought and decision-making deviates from the very definition of “human.” — Chamber

It’s a shame that the possibility of more Gargantia got shelved thanks to the idea of a novel adaptation, especially considering that as an original piece, Gargantia is one of Production I.G’s best. While the last couple OVAs are a bit of a pain to track down, they’re a must if you want the complete Gargantia story as it stands. For the cafe, I struggled between whether to place it under the “Coffee” or “Cakes” menu, but after recalling all the effort that went into crafting the island atmosphere and its customs, I gave the series the benefit of the doubt. Gargantia on the Verdurous Planet offers a pleasantly sweet ride for any mild fan of the mecha genre, thus a “Cake” here at the cafe! And yes, Viz’s awesome LTD ED release of the show rests calmly on my shelf awaiting my next revisit to the blue planet. 🙂

What did you think of Gargantia? Did you enjoy it enough, or did you find it lacking in a few departments? It may not the best mecha anime out there, but it’s certainly not the worst. Let me know your thoughts about the quiet little title or this review down in the comments, and until next time, this has been