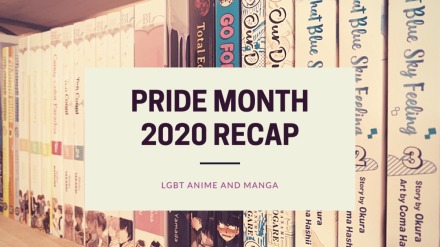 I decided to take a week off following my last Pride Month post to refresh myself after reading and writing for 30 days straight! While on my little holiday, I also filmed, edited, re-filmed, and re-edited a YouTube video recapping my month’s reads and watches for you all. YES, after much exporting headache, WE DID IT, and I can finally rest having delivered on my promises! If you haven’t seen it yet, you totally should! 😉

I’ve had a lot of fun recording videos this past month. To think that 39 people have already subscribed makes me so happy! I put a good deal of work into this one, so if you have watched it, I’m extremely grateful. (Thank you!!!)

What started off as a small feat of tackling my shelves (mainly to validate having bought all this LGBTQ manga) ended up becoming a journey of self-searching and enlightenment. This past month brought with it lots to read, of course, but also lots to learn. These characters and mangaka come from all different walks of life, and as such tackle LGBTQ themes in slightly different lights. No two stories were the same; similarly, I found that all of these reads were worth having on your shelf. Truly, I had an amazing time!

Here is a list of everything I reviewed for Pride Month 2020:

Seven Days: Will You Still Love Me When Monday Comes? || Review

Melting Lover: The Shadowy Side of Affection || Review

Escape Journey: Chasing After Love in a Heteronormative World || Review

I Married My Best Friend to Shut My Parents Up: Gentle Romance & Silly Humor || Review

Our Dining Table: Growing Closer One Meal at a Time || Review

Our Dreams at Dusk: Ending Pride Month on a High Note || First Impressions

Every like, comment, share, and follow gained over the last month became fuel for me to try my best and to not give up. Some days I just woke up not wanting to write, but it was reading your kind and supportive words that encouraged me to get the next post out. Really, we did this together. THANK YOU for following me on this journey!

Lastly, I want to let you know that I’ll be archiving these works (in addition to their respective review category in the menu) under the “Projects” tab for future reference. (I mean, it is a series of 13 posts PLUS a 28-minute recap video!)

While I’m here, what can you expect next? Well, I’ll be posting my big quarterly update in the next day or two, which will tell you everything that I’ve been doing behind the scenes, as well as what big things I have coming right around the corner. It would seem that now, at the end of a wonderfully long month, new things can finally start to take root. Please look forward to it, as you have my June Pride Month posts! Thank you again for reading this, and ’till next time!

A brief spoiler-free review of the standalone manga title “Claudine,” story and art by Riyoko Ikeda, and licensed in English by Seven Seas Entertainment.

Since he was eight, Claudine was convinced he was born into the wrong gender. He grows up beautifully, more so than any of the men and women in Vernon, yet struggles through life with a series of depressing relationships. Only a handful of people reach out to Claudine and see him for who he is, but no one truly understands his heart. Claudine simply wishes to find true love, yet his efforts continue to end in tragedy as he is unable to be accepted as a man by society and his peers.

As a piece of historical fiction, Claudine offers a timeless story full of heartbreak. Riyoko Ikeda of The Rose of Versailles fame paints a picture of France that is rich in culture, but also a bit too melodramatic at times. Characters overreact to the smallest things with vivid expressions that can dominate several panels, which can make the read feel overwrought with agitation.

Without spoiling anything, some characters even dare dedicate their entire lives to destroying the hearts of others—an unfortunate trend which feels straight out of a wild telenovela or K-drama. Or, you know, The Rose of Versailles. This kind of thing might work well with a long-running series. But as a single volume work, the repetition of shocking reveals can feel overwhelming and excessive.

All that said, however, very few manga can make a drama feel as compelling as Riyoko Ikeda does, and to that I applaud Claudine. As a standalone piece, this is the kind of artistic mastery that most short story mangaka may struggle with. Here, the romance feels real, but so does the grief and misery that comes with rejection. Claudine explores sex and gender identity in a way that is poignant, respectful, and anything but forgettable.

“But Claudine, You’re a Girl”

Not sure of what to do with her own child, Claudine’s mother takes him to a psychiatrist who reappears at a few major junctions in Claudine’s life. This was customary for the time, as being gay or trans was considered an illness, and thus treated as something that would eventually “go away” just as it came. We know now that this is far from fact. However, this is the best Claudine’s mother could do, and I believe she meant well by it.

Claudine’s father Auguste, on the other hand, was a mostly good man. A “large-hearted, manly dilettante with a variety of interests,” Claudine’s father was the only one willing to raise the child as he saw himself. Claudine expressed interested in equestrianism, hunting, sports, literature, and world history, to which his father only helped to provide the best resources to raise Claudine just as well as his other three accomplished sons. Loving Claudine wholly, Auguste says it himself: “That she doe not have a man’s body is honestly a mistake on God’s part.”

We follow Claudine through childhood flings, teenage romance, and relationships in adulthood. The women he encounters transform his life, although whether these interactions are for the better or not is definitely up for question. There’s one particular childhood lover, Rosemarie, who annoyingly clings to Claudine and causes him nothing but trouble. As he navigates through life, Claudine finds that it isn’t wrong of him to be a transgender person so much as that being trans is just highly ill-advised when no one can accept you for it. His emotions are understandable, and his actions are largely respectable.

Friends, strangers, and even his own family turn Claudine away from them on account of their own ignorance. A deeply seeded disgust for gay and transgender people plagues the populace of 19th century France, and—as it has continues to do today—only serves to ruin Claudine’s life. Despite his graceful air, his love of knowledge, and his deep compassion for helping others in need, Claudine is dejected again, and again, and again by women who have mixed love and kindness with lust and sin. 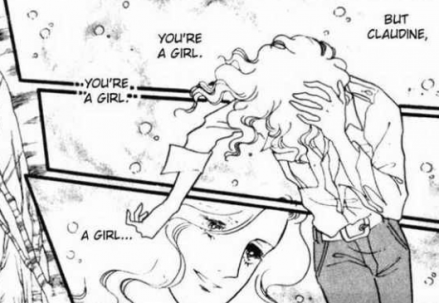 Why We Have To Do Better

This is a breathtaking manga. Although it was published way back in 1978, so much of this shoujo-ai drama can speak for the view of transgender individuals held by most conservative-minded people today. The story is highly relevant, and I’m so thankful Seven Seas was able to publish it when they did. Their restoration of this vintage shoujo manga is gorgeous, and the large trim format is greatly appreciated.

More than feeling upset, frustrated, or annoyed at the terrible ways Claudine was betrayed, I can only really sum up my thoughts on the ending with this: Claudine’s story is a sad one. It’s tragic, it hurts, and yet it’s an unfortunate end many transgender people find themselves meeting. Guys, it’s tragedies like this that remind me we still have a long way to go. For people like Claudine, for people who are confused or still in the closet, for people who are out and proud of it—We have to do better. So. Much. Better. And that begins with accepting these identities—NOT just acknowledging them.

From cover to cover, Riyoko Ikeda explores gender and sexuality, identity, culture, and self-acceptance in a coming-of-age tale so sorrowful and heartfelt that I can only want to express how important Claudine’s story is. It is works like this that can easily impact people, and even leave behind impressions that can hopefully change lives for the better. Certainly, I won’t be forgetting Claudine anytime soon.

They lived together, deceiving the world, behind the backs of their friends. But like a flower waiting for rain, their caged love finally surged out, shining. I believe this was a true love, surpassing all preconceived notions, entirely moving. — Claudine’s doctor

What a great read this was. Riyoko Ikeda’s art style is not only iconic, but truly emblematic of early 70s and 80s shoujo manga. Sure, it’s a bit over-the-top at times, but what would a Riyoko Ikeda manga be without her signature dramatic twists and sparkling style? For telling an admirable albeit tragic tale about a respectable transgender man and his struggles with finding love and self-acceptance, I welcome Claudine as a “Cafe Mocha” title, a rating reserved only for the bests out there. Did I mention that the dad is actually a GOOD guy in this one? Normally it’s the other way around, so this was quite a pleasant surprise!

Anyone else read Claudine? I’d love to hear your thoughts on this old but classic shoujo read. I’m so glad I got to include a manga with a transgender focus this month with something like Claudine. My next Pride Month post will be over something much more modern, Bukuro Yamada’s Melting Lover, so please look forward to that! ‘Till next time!