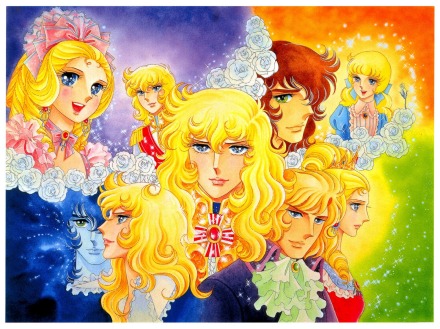 A spoiler-free review of the 40-episode fall 1979 (wow!) anime “The Rose of Versailles,” produced by Tokyo Movie Shinsha, based on the manga by Riyoko Ikeda.

It should come across as no surprise to you when I say that “History is timeless.” It also shouldn’t be very startling to hear that we as humans have made more mistakes than triumphs, and that the stories we craft are centered on correcting these mistakes, righting wrong, to reach a triumphant end.

But what happens when history IS the story being told, in that no matter the effort that goes into the rising action, the resolution is that repetitive, burning, regrettable end we try to avoid in stories? Tragedy is born, my dear reader, and “tragic” is indeed the word which encompasses the French Revolution. This single period in history will eventually spawn thousands of tales of its own, one particular rendition brilliantly capturing the many ugly and beautiful faces of this rebellion – The Rose of Versailles.

A Rose of Red & White

So I partially lied above when I claimed that history itself was acted out directly for this work. From the incredible mind of its creator Riyoko Ikeda, Oscar François de Jarjayes is the main character brought to life by the story. Historically, “he” is a man who will, for this story, be a blend of many other significant figures in the revolution. Born to a noble house in need of a male heir, Oscar, a woman, is raised to be a man of valor, vigilance, and vitality, a new kind of “character trope” which will eventually be coined as the “strong woman.” A loyal knight and dear friend of Marie Antoinette’s, Oscar serves her beloved France like a hearth for a mansion, neither wavering in spirit nor charisma in front of the rich and poor alike. Like the scrolls call for, however, Antoinette, a redeemably innocent girl at first, will eventually lead the throne into further corruption, to which Oscar must take a stand for the glory of France – the people – or for her beloved crown in the palace Versailles.

Want to know how to spoil the anime for yourself? You cannot. Versailles is unique because knowing how it ends works in its favor, similar to adaptations of “Romeo and Juliet” or “Animal Farm.” It’ll start with Antoinette’s arrival to the pristine palace and end with her untimely beheading, just how we know it. Even if you knew each of the dirty bits surrounding the revolt, such as the “Affair of the Diamond Necklace” and the terrible folks that manipulated and crushed others to secure a cushy seat in the palace, this anime, though still about the revolution and its events, has another objective: Oscar. She alone is worth watching this series for.

A rose of many thorns, Oscar is cast with a terrible fate from the get-go. Jarjayes needs a male to succeed his place, so BAM, Oscar, you are now his son. Also, buddy, you’ll have to struggle against being a man for the public yet a woman for yourself. Your heart will be torn to pieces by your own prickly thorns as you choose between a fellow knight of honor from a foreign land, or your childhood mate who has always had your back, but never both. Your highness, whom you cherish like a baby sister, will learn from evil influences, and it’ll become impossible to manage both her and your own image. Finally, your homeland will succumb to the invincible flames of the revolution – Flames which burned you for many years beforehand because Versailles – the place you call home – is ultimately a royal hell on this cruel Earth. Yet, you knew all of this, and you still must choose: Be red, or fade to white.

This is the technical part of this review, introducing features like animation, sound, and voice acting. On the animation front, 1979 sure does hurt! The over-effective glitter during these original shoujo moments is quite much, and the ridiculous, lackluster sword fights do not do much to help the cause. Some awfully cringey facial expressions and spoon-fed symbolism also are a drag. As I said, 1979 hurts, but maybe that is where part of the magic stems from. The aging quality Versailles carries brings in strange emotions like disgust and lust alike, and while I still push for a four-part film series remastering the entire series by Ufotable, I could just as well endure this and admire one of anime’s earliest masterpieces. It is one of those, “Laugh now? Hah, you’ll be on your knees begging for mercy later.”

In the sound department, I sigh internally. You can practically make out a man exclaiming “Ching!” with every sword clash. The over-dramatic echoing effects of shattering glass and collapsing bodies also gave me annoyed shivers. It helps, however, when Versailles walks home with one of the musical soundtracks ever. The OP “Bara wa Utsukushiku Chiru” drawing the comparison between Oscar and a rose, the ED “Ai no Hikari to Kage” depicting her struggles with romance and feminine life, and all of the fantastic tracks in between set a strong stage and leave a solid impression on what true shoujo drama should sound like. 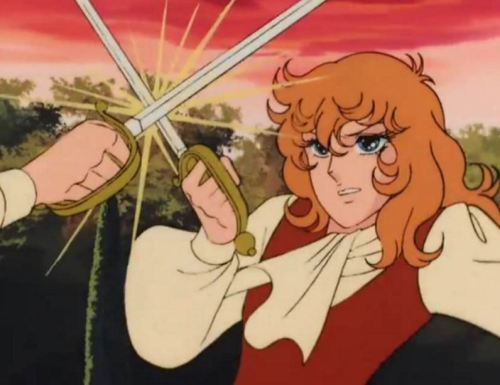 The show was also never given an English dub – Good thing it will never need one. I am not one to nitpick with Japanese acting, as I sadly do not speak the language, but by God, when Oscar asks for a leave of absence you damn well give her one! Where the visuals could not lift the show, the acting brings all of Versailles’s drama to life.

Why bother reliving the past?

It is arguable the French Revolution started because human beings are inherently evil people, and that all people are born equal. Those who oppose drink their half-full glasses knowing that humans are beings which can reflect on their mistakes to better themselves and the world. The Rose of Versailles masterfully captions both of these viewpoints and reiterates them in a powerful soap opera for anime fans. Portrayal of the female spirit in the ladies of Versailles and of the slums adds additional gold foil to a solid foundation. Melodrama is an enhanced asset that the show flaunts gloriously, and its execution is impactful on a very deep emotional level, given the short time it takes to adjust to the production quality. Just, DO NOT LET THE ANIMATION FOOL YOU, PLEASE.

Lastly, the cast of this historical “story” is just us living in another time, a barbaric fantasy which seems eons ago. The only difference is that this current humanity does not need fancy balls and lavish candelabras to vent its frustration. The Rose of Versailles is not for all, but all for one. In other words, with its age, shoujo background, cheesy moments, and 40-episode run, it is clearly not for everyone; however, it is more than willing to fight for the good of the cause, and for justice everywhere. Its realistic quality and well-researched plot should also give most history buffs a run for their money. Heartwarming and heartbreaking, this is a classic for a reason, and as such should be adorned at your nearest convenience.

“Love can lead to two things: the complete happiness, or a slow and sad agony.” 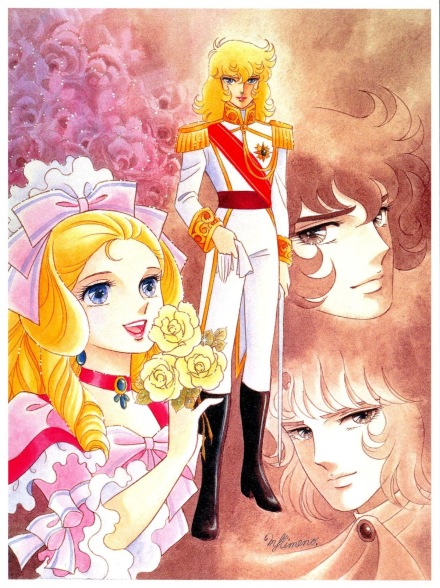 Nozomi Entertainment’s two LTD ED boxsets sit with poise and elegance on my shelves, awaiting my return to a dark period in human history just so I can re-emerge enlightened and exhausted. I thank you for spending the time to read through my thoughts, and I do hope you feel the urge to suddenly dip into this classic! I’m not sure if you will pick up on this, but this review was once again done in a different fashion. One change is trying to put a piece of fan art that took out of the experience. Do you prefer this new format over the old one? How about your own thoughts on The Rose of Versailles? Was the masterpiece story enough to sideline the iffy visuals for you, or not? As always, let me know in the comments, waltz on over to that like button if you enjoyed the review, and until next time, this has been