I’m back for day two of showing off all the stuff I bought for the holidays this year. Honestly, I spent waaay too much on myself, haha. But it’s so hard to pass up great deals on anime and manga you know you’ll want to have in your collection eventually, right?

So I splurged, as I often do, and here’s what I picked up through RightStuf’s 2019 Cyber Monday sale—enjoy!

Oof, we’re starting off with a strong one, and one of my favorite releases of the year no less. Space Battleship Yamato 2202 is one of those sequels that I normally wouldn’t recommend, if only the studio didn’t do such a fan-FREAKING-tastic job at reanimating the story for the modern day. This is my personal favorite remake of a classic series, and although it’s not everything I wanted Yamato’s sequel to be, it is told EXACTLY as the original story was, if not better on every front. 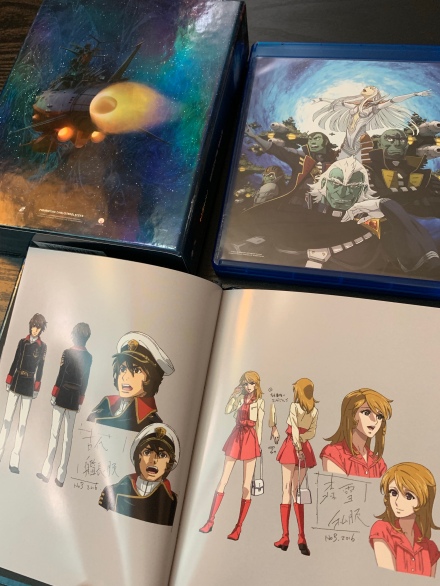 More pictures of the box and the art book. Funimation did such an incredible job making this as similar to their 2199 release as possible—as a collector, I am thankful to own such beautiful cohesive sets. The back of the Blu-ray shows off stunning art of the series’s villains, and while the art book is a little more bland than the previous one, it’s still a great bonus! 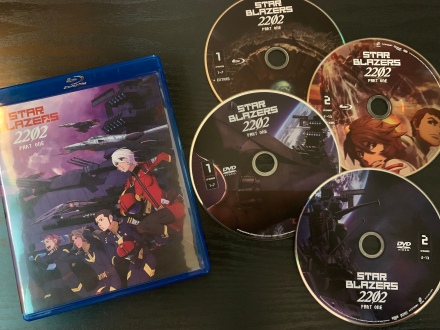 Ughhh the reverse side of the Blu-ray features gorgeous art of the side protagonists of 2202 preparing to engage the enemy. I love the violet sky and ship looming in the background. The discs are also uniquely designed with artwork from the series.

And if you were wondering what was inside that silver box up top, YES, we got some high quality art boards featuring artwork from the original Japanese releases. Really wish I could frame ALL of them, but alas, I’ve got very little space to spare. Kinda weird how there’s a duplicate of one of the cards . . . maybe I’ll give it to my brother or something, as he’s also a fan.

Up next is some more classic mecha stuff, this time with Gainax’s hallmark Gunbuster and it’s sequel recap/rebuild film Diebuster. Other than the fact that this franchise is absolutely iconic to the genre, I know very little about it. Spoiler alert, there’s a high chance that this will be my pick for my Valentine’s Day special, but we’ll see!

While the first season from the 70s or 80s (can’t remember) is long out of print here in the states, the second season is fairly easy to pick up. Here are all three volumes I picked up for like $2 each, and just like the films each release comes with its own little art book—such a pleasant little addition! Happy to finally be able to explore this lost gap in my Gainax history!

Lots of Aniplex stuff was/is on sale this year, and while I had no original intent on picking up the second half of Aldnoah.Zero (those who’ve seen it know why), I decided to snag them up before they went OOP like all of Aniplex’s older releases seem to be doing.

For half price off, just $15 each, I really didn’t want to miss out on owning this series complete if I ever turned the other cheek in the future. It’s not a great sequel, but I love this series nevertheless. Here are the reverse arts of the DVD, which I personally leave on display this way cause the warm color palette for these two DVDs congrats nicely with the cool-toned blue and turquoise of the first season sets. 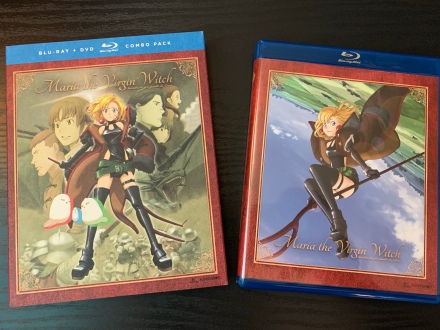 Lastly for anime is this little one, Maria the Virgin Witch (clearly keeping up with the space/mecha theme, I know). In all seriousness, I picked this series up because it was recommended to me years ago at Naka-Kon and I never ended up watching it for some reason. Well, that changes now, and for $11 how could I resist!

Last but not least, I bought more manga! Continuing with volumes 4-9 in my collection, here we have the majority of what the second cour is currently adapting if I’m not mistaken. Guys, I unashamedly LOVE Fire Force. I find the series to be tons of fun, the bits of unnecessarily flashy fan-service aside, and the character outfits/designs are just the coolest in my eyes. I’ll actually be cosplaying little Shinra Kusakabe in March, so I’m really excited to beef up my manga knowledge of the flame hero!

There it is, the second of more holiday hauls to come. Like the first haul’s unintentional blue-green blend of items, this haul is also by chance themed out for a color. Can you tell what that is? (HINT: It’s the color of FIRE.) Feel free to share your thoughts on any of these pick-ups down in the comments, and I’ll see you all tomorrow with yet another batch of anime-related goodies!