A spoiler-free review of the 12-episode fall 2015 anime “Beautiful Bones -Sakurako’s Investigation-,” produced by TROYCA, based on the light novel by Shiori Ota.

Deep in a grove in Asahikawa City, Hokkaido, is the estate of one incredible woman. Due to the greenery blocking the mansion’s front, however, it’s quite easy to pass this place without noticing. That is, unless you are a bored high-schooler looking for something . . . different . . . something out of the ordinary to buy his time. Well folks, average boy Shoutarou Tatewaki meets this incredible ojou-san, but is her mysterious and haunting aura just a facade? I mean, she loves sweets just like any other person and it’s not like she can talk to the dead or anything – She does collect bones for a living, though, and her ability to analyze specimen, alive or dead, is quite impressive . . . But as you know, curiosity is never kind to the cat, for this “Shounen” must now tag along with Sakurako-san, uncovering corpses at every bend in the road! Don’t worry, though:

Beautiful Bones is a mystery anime without a doubt. But there’s an air to each of these episodic moments that doesn’t allow us to get “too deep” into things. Rather, each episode or two is a light mystery always involving a body because these kinds of grim things attract Sakurako-san. The story builds its cases off of familial relationships, be it a husband escaping death, a mother protecting her kids, a grandmother who just needed more time . . . They truly are feel-good mysteries, and once Sakurako and her boy solve them, you can’t help but feel remorse for those unfortunate souls that lost their lives. Because this familial attachment exists, and the victims aren’t random people off the streets, the anime doesn’t necessarily need high-strung thriller drives to pull off a good mystery. Thankfully they are interspersed throughout its run, but honestly, some of them made for rocky pacing at times.

Looking at characters we have our “Shounen” from which the story is told through the eyes of. He’s your average, dutiful citizen, commonly calling the cops before Sakurako-san can steal a treat for her efforts (talk about giving a dog a bone). The anime appears to hold some sort of romantic development based on the poster alone, but not much happens. I view Sakurako and Shoutarou’s relationship as a metaphorical sibling one, anyway. Sakurako, as the over-arching story progresses, seems to have been through tragedy with a kid similar to this boy, and as he slowly accepts her hobby of bone-collecting and knack for finding bodies littered throughout town, she opens up to him bit by bit. All this boy wants to do is figure out what makes his Sakurako-san click, and he’ll continue to be enraptured by her long obsidian hair and haunting gaze so long as she lets him.

Viewers obviously fell in love with the ojou-san. Sakurako-san is definitely unique – Not only as an individual in the story, but interesting compared to all characters I saw in 2015. Firstly, she’s an osteologist, one who studies bones. Clearly she loves what she does, assembling and displaying magnificent structures of deceased creatures she has collected over the years. Adding to her oddities, she also likes blaring screamo rock music when she drives, has a mad passion for sweets (which BTW will make her squeal like a 4th-grader), and she won’t hesitate to whistle at a person’s toes which she consumes as fantastically unusual . . . yeah. A bit rough around the edges, old-fashioned, snarky, deviant, and obsessive, Sakurako is the ojou-san of the decade! She is the Victorique to my curious Kujo ^.^

There is also a clumsy but kind cop, a school friend who holds regret in her heart, a plant fanatic teacher, a grandma who humbly bakes tasty treats, and a cursed family dog. A nice batch of supporting characters, they are. If Sakurako is the skull and Shoutarou is the sphenoid, then this group makes up the hearty backbone.

Other than “mystery” being listed as its genre, the other factor that made me dive into Beautiful Bones was the entrancing animation done by TROYCA. They did some work on the characters in ALDNOAH.ZERO, which I am personally a fan of. So to see them tackling a project all on their own made me really excited! I specifically loved the critical designs that went into the house: the emerald wallpaper, the old wood texture, the embroidered carpeting, and of course, those beautiful bones. Sakurako’s initiation sequence into a case (cue glove snapping) was also quite enchanting. Just in general, Sakurako anything was to die for.

There were many elements in the sound department that won me over. One was the voice acting done by Shizuka Itou AKA Sakurako-san. She did a phenomenal job at capturing her snarky yet occasionally sadistic tone I mentioned earlier. I also liked the sound effects that accompanied the little moments: rattling bones in a box, flipping through pages, and that signature glove snap of hers – YES to all! Third was the soundtrack, which unfortunately has so little info about it that all I could find was the song below. I left in the animation sequence version just to get you going! The opening, “Dear Answer” by TRUE also got me in certain ways.

Just watch her go . . . and be amazed by the music! LET IT CAPTURE YOU

One last theme that Beautiful Bones hits up on is regret – “the feeling of sadness, repentance, or disappointment over something that has happened or been done.” Nearly every episode introduces a character holding regret next to guilt. Sakurako, for instance, keeps secrets from the boy regarding a certain tragedy that occurred in the past, which she regrets. Another more obvious case is the teacher, who seeks repentance by _______ ______, in hopes that they would make up for the lives he couldn’t protect. If there’s one thing that this anime taught me, it’s that “Time doesn’t heal all wounds, and if we act in the moment, we can prevent regretting things,” or something to that extent.

Bones are not only the symbol showing that we died, but also that we lived. They solidify and prove our existence. That said, the mysteries that unravel in this series focus more with coping for those that were lost. “How they died” is always the grand question, but Beautiful Bones clings to “Why they died, and what were they thinking before their life was taken?” It is, after all, as its opening statement remarks at the start of each episode:

“A Story Dedicated to Those Trapped by the Past”

Thus, it wasn’t designed to be a hardcore Sherlock mystery series to begin with. All stories have a beginning and an end, life and death, and though this anime might ring or remain flat with you, Beautiful Bones -Sakurako’s Investigation- provides interesting counselling to those indeed trapped by the past, and is more than worth the look if you are still wondering why your grandma wanted you to pick up some ice cream before you came to visit her.

“There are things that have value because they’re pointless, you know.” – Shoutarou Tatewaki

+ Sakurako-san is ojou-san of the YEAR, very peculiar, unique character

+ Capitalized on themes of familial loss, regret, and living life in the moment

– Yet another light novel adaptation, meaning WE NEED MORE SAKURAKO

– Varied pacing and contrasting slice-of-life with thriller was a bit rough, though still enjoyable 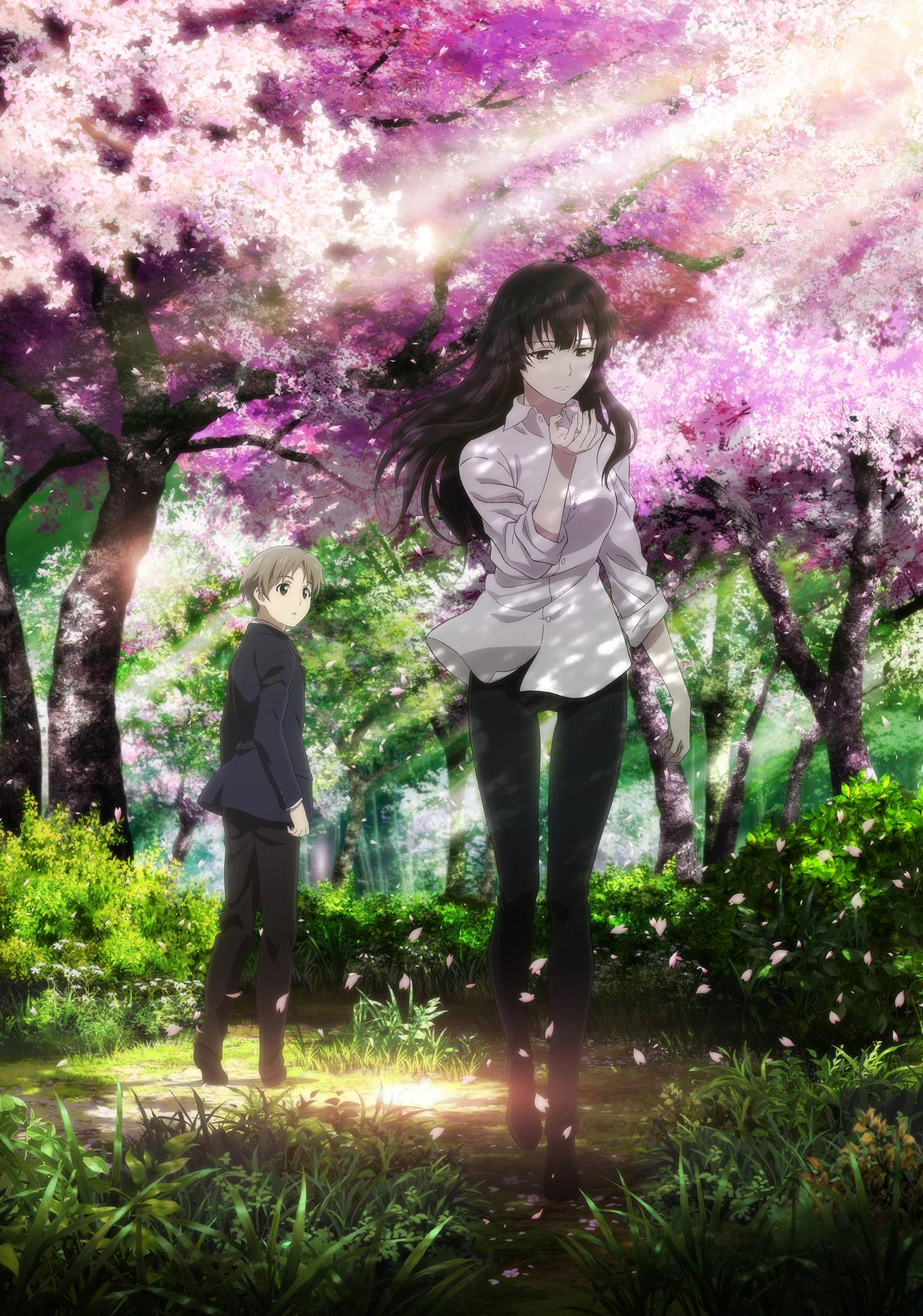 So who else thought that Sakurako-san was BAE AF?? Also, have you given this anime a look yet? If not, check it out on Crunchyroll for FREE if it’s available to you! I am eager to know your thoughts on this mixed-bag mystery anime as well as any thoughts about my review :3 If you’re out and about and stumble across a corpse – Don’t panic! Who you gonna call? Sakurako-san!! Until next time, this has been