Chances are that if you were linked here from another blogger pal, then you might be new. To those first-timers, “Hi, I’m Takuto, welcome to my anime cafe!” As part of the OWLS blog tour’s first monthly topic, “Disruptors,” I decided to incorporate what would have been my standard Kiznaiver review into this discussion on peaceful protest. Something different to mix things up, right?

“To disrupt” has a negative denotation, but rather than looking at the verb in a negative light, we are going to use the verb in a positive way. It’s like the word “protest,” which has positive and negative connotations depending on the perspective of the person.

Disruptors: An individual or a group disturbing a system/set of social norms that they believe is destroying what is morally right.

I got this. Thanks Lyn for the prompt!

A brief discussion of the spring 2016 anime “Kiznaiver,” produced by Trigger, directed by Hiroshi Kobayashi, based on the original story by Mari Okada.

When You Hurt, We All Hurt

Kids being subjected to horrific sociological experiments lurking within the shadows of a metropolis is a trend that, by now, anime is no stranger to. Just look at A Certain Scientific Railgun S and Terror in Resonance among others for proof. The newest “toddlers in test tubes” flick to come from Japan features kids not bound by grades, smarts, or other great potentials, but by blood–specifically pain–instead.

That’s right, they’re blood brothers (and sisters), and when one kiddo cries, the agony is divided. But like most scary psychological tests, the experiment is eventually caught, abandoned, and deemed a failure.

Years later, seven teenagers–who would otherwise NEVER be friends with one another–find themselves confronted by Noriko Sonozaki, a bland yet mysteriously cruel high-schooler clad in a suit and long pale blue hair. She sets up an elaborate scheme to trap and force these clique representees into one small conflicted group in order to revive the “Kizuna System.” All of its members, or “Kiznaivers,” become connected through pain in a farfetched attempt to thoroughly understand what truly binds people.

In a fashion very reminiscent of The Breakfast Club, the Kiznaivers must learn to get along with each other and accept one another’s differences and desires, or else risk receiving much more than a bad lab grade. Little do these wandering teens know that pain is not always a physical ailment.

Whether lifting weights or running sprints, it’s easier to relate to people by saying “Ah god that sucked!” after the workout rather than during while you’re dying. Similarly, we quickly learn that it is not pain that binds the group, but the absence of that pain the minute the torture stops.  Basic application of sociology practices can easily tell us that breaking “social statics,” the order that holds society together, can lead to psychological effects both beneficial and disastrous. How are the three main broad modern perspectives of sociology displayed in Kiznaiver . . . ?

First is the functionalist perspective. “Society is a set of interrelated parts that work together to produce a stable social system.” This refers to the seven deadly sins that reflect each character. I didn’t tell you about them? Oh, well, here’s a pretty infographic for that:

I did not make this infographic. Character images belong to Studio Trigger.

Like The Breakfast Club was trying to strike home with at the end, society CANNOT function WITHOUT these individual traits, and that each of these traits–to a certain degree–exist within each one of us. Through a mutual hostility towards Sonozaki and the Kizuna System, consensus is achieved within the group . . . . that is, once they finally make the “high and mighty” Maki come around. They quickly realize that if each of one of them does not sacrifice himself to the collective, then their summer would be dreadful as hell. The dysfunctions that the group encounters, such as embarrassing reveals and aching hearts, do, in the end, lead to social change in order to fix their wavering social instability.

Second is the conflict perspective. Oh yes, it wouldn’t be anime if our main cast wasn’t chased by idiots in ridiculous suits, racing against the clock to solve a simple equation of personality or reach the checkpoint in some quirky game. Sonozaki doesn’t like waiting for the pot to simmer, and we see this through her hiring of goons and manipulating of the higher ups to reach quicker means of an end. She exercises calm yet absolute control over her lab rats, and her form is only disturbed when Katsuhira Agata, our quiet protagonist, invites her in on the fun. Sonozaki may not be the best-developed of her kuudere kind, but her use of conflict as the prominent source for change adds a fair degree of speed and excitement to this show bombarded by melodramatic twists.

Third is the interactionist perspective. The name’s self-explanatory. “It focuses on how individuals interact with one another in society.” Our crew of seven fall back on this perspective as they uncover their true selves and unravel the hearts of others. This perspective is interested in the ways in which individuals respond to one another in everyday situations, which is why Kiznaiver is rife with scenes where these unrelated characters are just eating or lying on the couch and talking to each other nonchalantly. Slice-of-life interactions and witty dialogue are what keep this anime afloat, after all. The show gets its edge from the characters’ constant defining and interpreting of each other’s actions.

REMEMBER, They Didn’t Chose This Life

It’s easy to forget that our seven peeps weren’t chosen heroes, but actually lab rats of a terrifying experiment lost in the past. In other words, they didn’t chose to save society by disrupting the immoral, negative flow–they were FORCED to make change, and I think that’s why they struggled so hard. If anything, they dedicated themselves to taking down Sonozaki and the supposed system designed to achieve “world peace.” These kids just wanted to continue being normal . . .

Katsuhira, a victim unresponsive to pain,

Chidori, a silent lover in denial,

Tenga, a street thug to pass the time,

Maki, a bookwork undetected by her peers,

Yuta, a popular kid distanced from his past,

Niko, a spoiled delusionist by choice,

Sonozaki, a child in fear of suffering . . .

But because these seemingly unrelated individuals were bound together by fear itself, they learned to welcome the bizarre, the wacky, and the weird that resided within each of their souls, and to protest against the elusive faults of a perfect society so that their new bonds of friendship could persevere through even the thickest of storms. In the final bout to save themselves, the Kiznaivers resolved to defy the social norms dictating their lives, for in the deepest, darkest, most-messed-up cores of each other, they found only themselves staring back.

Pay no heed to the slightly pessimistic tone there at the end–it’s supposed to be a good thing! Also, don’t feel bad if you didn’t recognize any of the science I was spittin’ out at the beginning. I just happened to be in the sociology neighborhood at school. So, what have you learned from this? Well, other than that Sonozaki is kinda a mad, lovesick bitch on sedatives, we found that sometimes it is not always the positives that make people seek change. The Kiznaivers were tired of wallowing around with cringy, disgusting insides that decayed their spirits.

To eliminate that self-pity, they helped each other, which in turn helped themselves find personal salvation, which finally led to an improvement within their squad, which was reflected as a mirror of society itself. By putting their differences aside, disrupting social norms, and coming together with a strong goal in mind, they effectively corrected some of the dysfunctions of society, even if only for a brief moment. That, is understanding. That, is change. That, is healing. There, look at me finding the positives!

Kiznaiver is by no means one of the best anime out there–I’d welcome it as a “Coffee” here at the cafe. But, if you look hard enough, you might be surprised with what’s actually lurking in the belly of the beast. Perhaps seven deadly sins? All 12 episodes of Kiznaiver can be found on Crunchyroll if I’ve at all intrigued you! If you liked The Breakfast Club, then this also might be for you. And if things just don’t jive with you too well, heck, at least Trigger’s animation and Yuuki Hayashi’s music are entertaining enough. Oh, and we can’t forget its true legacy, the opening”LAY YOUR HANDS ON ME” by BOOM BOOM SATELLITES.

This concludes my January 27th entry in the OWLS “Disruptors” blog tour. Please check out Pink-chan (Pinky’s Palace) who did a lovely job right before me (as did everyone else) discussing the modern dystopian classic PSYCHO-PASS, one of my top favorites, no less! Oh, and get psyched for one of my best blogger buds Lita (LitaKino Anime Corner) to wrap up this exciting month with Samurai Seven! Until next time, this has been 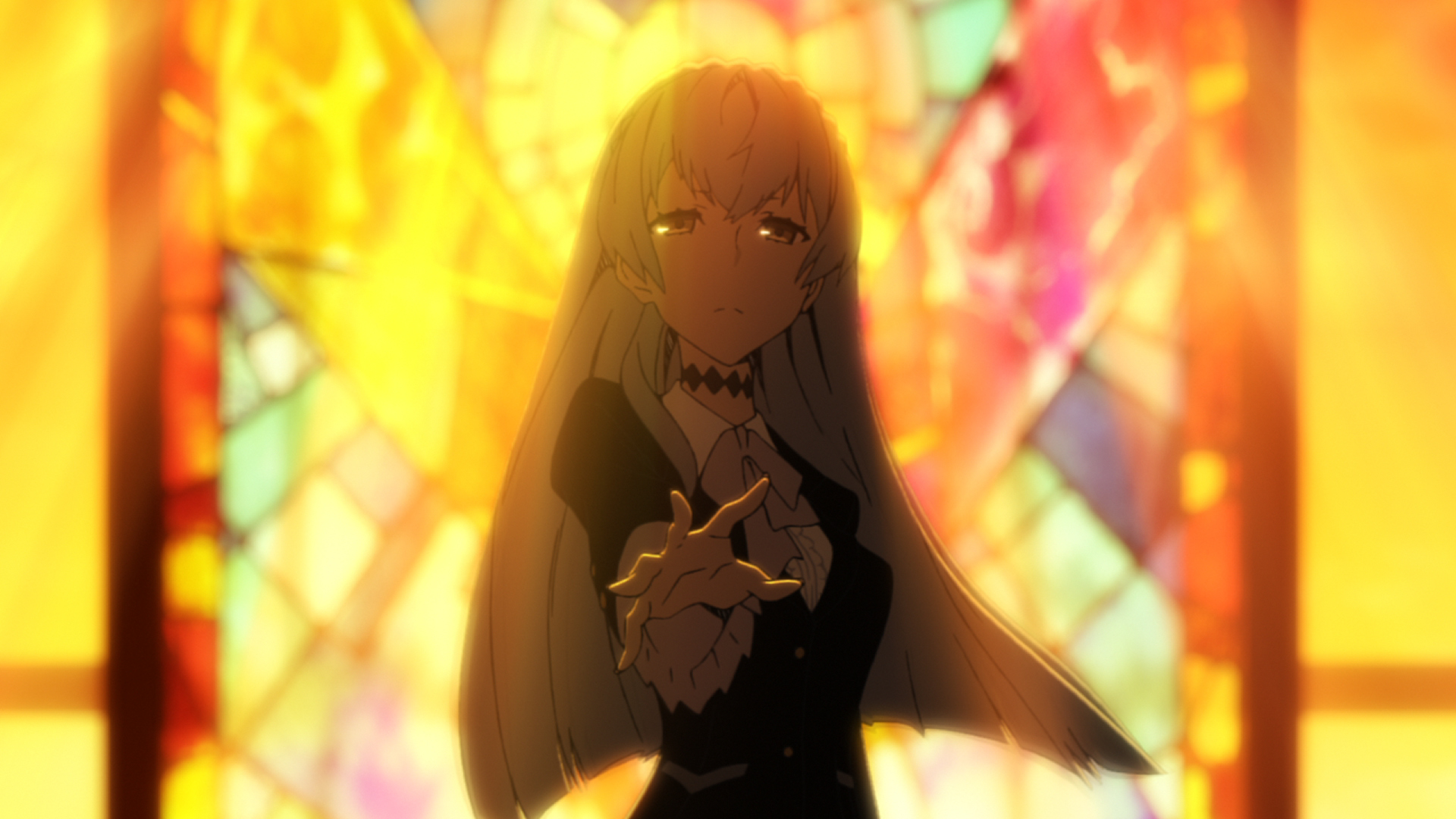 To disrupt, or not to disrupt: that is the question of change.