A spoiler-free review of the 12-episode summer 2015 anime “Rokka no Yuusha” or “Rokka: Braves of the Six Flowers,” produced by Passione, based on the light novel by Yamagata Ishio.

Whenever you’re out driving, do U-turns scare you? Oh man, they do me in. Usually swift and unannounced, what was the car ahead of me casually cruising along suddenly burns rubber and whirls around to oppose me.

So maybe I’m dramatizing U-turns a bit (also, they’re probably illegal in most areas), but doesn’t that abrupt 180-degree flip potentially ruin a nice drive? Well, if the other driver knows exactly how to pace it, direct it, and drive it on home, then no, not at all.

That’s what Rokka here did, and boy was it a spectacular turn.

This setting is gorgeous.

Long ago when the Demon God plagued the world with darkness, the Goddess of Fate came down and sent the demon back into the shadows – Not before splitting her powers amongst six heroes, though. Now in a present-day yet still fantasy-Aztec land, the Demon God has awoken numerous times, only to be quelled time and again by new rotations of these “Heroes of the Six Flowers.” 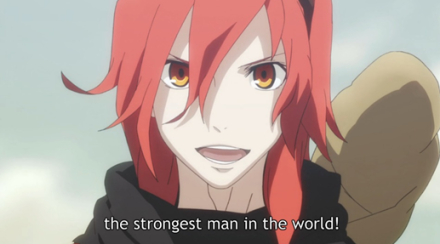 See? Not lying at all.

The self-proclaimed “strongest man in the world” Adlet has been selected to be one of these six braves. To prevent the Demon God’s next return, the six heroes band together and venture into the dark lands in hopes that they will save the wor–

Woah woah, slow down there. It sounds like a feasible action/adventure anime thus far, but right after episode four, it’s time to slam the breaks – Rokka wants a complete change of pace. What happens to our heroes?

Nothing. All seven meet up at the rendezvous point before plotting their attack. Wait . . . I thought there were just six braves . . .

There are. A magic barrier goes up around the temple, thick fog fills the air, and everyone is trapped in. Someone is an imposter.

If that’s not a 180-degree flip, then I’m not sure what is (I get chills just reading it). Rokka spends the first third showing off its heroes and their skills as such. It acts like your normal fantasy anime but then decides to try something new. The introduction of mystery to the fantasy/adventure genre is something I’ve never seen before. And through its fresh direction and pre-establishment of the cast, it moves forward without hesitation.

The sheer amount of suspense that Rokka builds up is absolutely incredible. Its clever hashing-out of your typical fantasy party members makes it a hot game of Dungeons & Dragons runnin’ around on the Clue game board. You wanted adventure? Not anymore. Take this murder mystery instead because it’s cooler. The gimmick works so well because we know these characters – All we have to do is roll the dice and start throwing accusations. You’ll have so much fun watching your options drop out as the game soars to its climax. 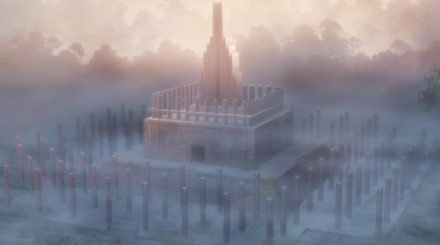 Spooky spooky ~ Who is the Seventh???

As a side note, I was a bit spoiled by the identity of the fake, but even that didn’t faze me. Seeing how all of the clues slid into place and watching the insanity unfold gave me more than my fill of entertainment. The anime still kept me guessing to the very end, regardless of those damn trolls. That goes to show how exciting Rokka is.

I have to mention the studio behind this anime because their name was completely new to me: Passione. I was 100% impressed by the superb animation quality and fantastical artwork. Due to the unusual yet intricate designs of each hero and their unique repertoire of arms, action scenes were bloody intense and wicked smooth.

For music, we had the reoccurring yet beloved fantasy artist Oshima Michiru (FMA, Sora no Woto) who filled the still, foggy air with an engaging score. Of its many OPs and EDs, my favorite was “Secret Sky” by MICHI for being everything I listen for in this wonderful genre.

With puzzling motives, characters we’ll all recognize, and shocking plot twists at each episodes’ end, Rokka no Yuusha was without a doubt 2015’s hidden gem. The only reason you don’t remember this title was because you stopped after episode three.  Rokka‘s not without its flaws, however: Some less-major characters could have used more backbone, the opening is admittedly a bit slow, but biggest of all – This is ultimately only a preview into Rokka‘s grand scheme, and as such leaves us with jaws dropped begging for a sequel. I hate this. Don’t worry, we still get an ending that ties all of this up, but for those wanting to know how the legend ends better start supporting the franchise.

You should watch Rokka: Braves of the Six Flowers because it’s something new. It takes a wild idea and runs hella far with it, leaving you clinging on for your dear life! Fans of the adventure genre especially won’t be disappointed with Rokka‘s new entry to the fray.

“That’s the first thing my master taught me. To laugh.” – Adlet

+ Studio Passione did an incredible job putting everything together

– ‘Supporting’ heroes could have been given more background, little more depth for all

Now, I’m still cautions with those U-turners, but Rokka really impressed me guys. It’s a solid “Caffe Mocha” in this little establishment, but again, you should spread the word so we can eventually devour more! You can watch the entire anime on Crunchyroll for FREE if that site is available to you, to which I recommend “full speed ahead.” I only cry because Ponycan USA is releasing this epic without a dub. If you took a liking to my tentatively new and less-wordy format, let me know by hitting that “like” button and commenting below. It helps me immensely! Thank you all for reading and as always, until next time this has been