Evening all, I hope your new year has kicked off with a marvelous bang! Mine was a bit anticlimactic, but at least the snacks were oh~so tasty! As we all usher in 2016 with open arms, high hopes, and huge wishes, I’d like to proudly say that not much will be changing around here. The café will still welcome guests, host reviews, and whatever else intrigues me! That being said, here is, as per the norm, the first casual update of 2016!

Redline – Oh man, where to start with this one? How about watching those Star Wars races (yes I saw the new movie, pretty good, even coming from non-SW buff) while huffing every shroom on the face of the planet, wearing one of those old blue/red 3D glasses, and chugging Root Beer. Sounds pretty damn wild, don’t it? I’m not very good at writing reviews for movies, so if I don’t ever get around to it, just know that my socks were blown off of my feet five times even after tying them down with duct tape. In other words, go watch Redline, and FAST!

Diamond Daydreams – This is one of those anime that you feel is so crappy just because it has meh reviews, regardless of how much you’re actually enjoying yourself. This light drama about 6 women in the winter has just enough empathy to tie yourself to each of them and make you want to just give ’em a box of chocolates after a grueling day 🙂 Review more than likely on the way!

Charlotte – Yeah, I remember this one! In fact, I wrote a review about it right here which you should totally check out if you haven’t already! This sucker’s got so many plot twists that it’ll keep you on your toes. Unless its surprises don’t appeal to you, to which I still reckon you finish what you’ve already started ^.^ It doesn’t seem to know what it’s going at for over two-thirds of its run, but the rush to the finish is chaotic and emotionally stirring. I’m still trying to recover from the damage – good and bad – it has caused.

Fate/stay night (2006) (rewatched) – If you caught my mini “Happy Holidays” post a week or so back, you’d know that I spent a nice time with this dubious show. Much like the first time I saw it: Bland animation, boring story, Shirou’s a big baka, etc. But despite its numerous flaws, it felt right to revisit Fuyuki City. Glad I got the chance to witness the original Fifth Holy Grail War on DVD!

Danganronpa The Animation (rewatched) – OMG OMG I finally got to reunite with my favorite courtroom mystery show after two years!!! Supposedly the game is 100 times better, but I don’t have a PS Vita to join in the fun. That said, the animation has to suffice, and I think it does so marvelously! Revisiting all of the characters, the story, and the creepy mystery-enshrouded high school was a high in my winter break – AND THE DUB, OH GOSH, FUNimation did a bloody fantastic job with it 😀 More to come on the physical release of it, and I might even write a review!

Sword Art Online Light Novel Volume 3: Fairy Dance Part 1 – I am halfway through my exploration and research on the infamous fairy arc and I’ve got to say, it’s much more exhilarating and less distracting in novel format. I thought it was good.

Fujoshi Rumi Manga Volumes 1, 2, 3 – GUILTY PLEASURE FUJOSHI STATUS: ACHIEVED. I fell in love with this manga after YouTuber Animepalooza recommended it in a video of hers. This obscure shoujo school comedy/romance absolutely entranced me, and I plan to find the remaining three novels translated on the web sometime, as they were never licensed, discontinued, I think. That’s a tragedy considering that I would’ve bought the SHIT outta it 😉

I’m still sad my smut is gone 😦 Why didn’t they license the rest? WHY??

Cowboy Bebop – “That’s right. 3, 2, 1, let’s go.” After I told my dad it was getting a rerelease, he flipped his sh*t and I went and bought it for us to watch. So far, with my family, we’ve watched 11 episodes, and loving each and every one of them! The characters and their quirks are unforgettable and its episodic nature with a boiling overarching storyline is handled perfectly. I completely understand why it’s a classic, and I can’t wait to see how these unlucky bounty hunters finish their journey 🙂

Sword Art Online Light Novel Volume 4: Fairy Dance Part 2 – Yep, my work to bring this half of the anime justice continues with the fourth novel. Very peculiar thus far, as so far the books have followed the anime in a parallel fashion. Now, we diverge a bit to reveal other musings that happened during Kirito’s rescue trip. Hopefully  it proves to clear its name in novel format.

Seraph of the End Volume 1 – So I haven’t started it yet, but I know I will either this week or the next. Not much to say other than it better be a step up from its anime adaptation -_-

On the convention side of things, I have settled on cosplaying as character from . . . Seraph of the End, in fact! As to whom, I want you to guess, muahaha! Let’s just say I chose this character because A) They were pretty cool and B) They look EPIC. Betcha can’t guess, haha!

And there you go, my second half of December in a nutshell. Lot’s of watching, but now that school has started back up (TOMORROW OH GOD SAVE ME NOOOOOOO), I assume that all of this will be set off to the side. I’ll try not to let that happen, but it is what it is. How was your December and the holidays? Breaks are always outstanding for me, so you all know I had a wonderful time 🙂 I’ll try to warm up my typing fingers and find my reviewing spirit so that I can get some great content to you guys, and in the meantime, I’ll be wishing on the diamond dust we all survive this after-break train wreck. This has been

Yes, I just rewatched Fate/stay night (2006) and YES, I realize that this is Fate/Zero. Who cares? Wishing you all the happiest of holidays and merriest of Christmas’!! Relax, stay warm, be with family, and watch anime 🙂

Konnichiwa minna-san! If you purchase anime or manga from RightStuf.com, you’ll probably know that their annual holiday sale cuts the prices of thousands of products just for us fans! Let’s just say I spent way too much . . . Today I have one of possibly two or even three anime/manga hauls, so let’s get to it (I’ll even leave you guys links in case you want to pick up these great titles yourself)!

First is the hit drama and its sequel that’ll bring you to tears. Ef was one of the first ten or so anime I ever watched, so you can only imagine how long I’ve been waiting to pick this up for a decent price. Being licensed and dubbed by Sentai Filmworks, both halves are normally $35-$45. In this exclusive sale, both halves can be purchased for just $14 each (DVD $12)! That’s $28 for two seasons on Blu-ray! If you don’t like having two collections, however, the recently released complete collection is $35 (DVD $28). Go get ef – You’ll only have emotional breakdowns for weeks after 🙂 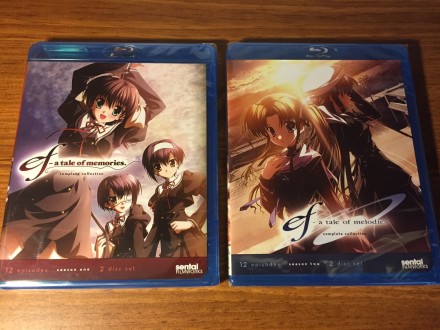 I honestly never thought that I’d be purchasing stay night – EVER. I thought it was pretty boring, not bad, just boring. When I noticed that the complete DVD collection was selling for just $10 (Blu-ray $35), I JUMPED ON IT. Licensed and dubbed by Sentai Filmworks, you can own the beloved yet infamous 2006 anime for just $10! 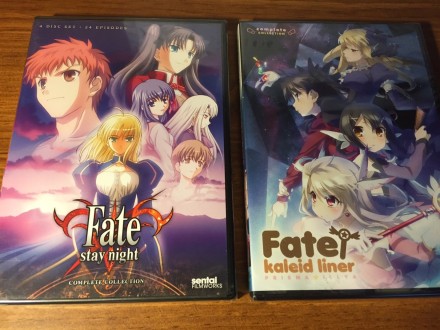 WHAT? More Fate for just $10?!? Apparently, and it, too, is complete with an English dub (Blu-ray $25)! I didn’t see myself wanting to own this wacky first-season spinoff either, but for the mere cost of two Starbucks drinks, it’s all yours. I’m starting to realize that coffee is incredibly expensive . . . good thing my digital coffee is FREE, haha!

While we’ve got the $10-DVD train rolling, here’s the famous “girls x giant-a$$ tanks” anime, or so I’ve heard. Anyway, it’s released by Sentai with an English dub (Blu-ray $25) and the $10-OVA collection is also on sale (Blu-ray $14)! I haven’t picked it up yet, but I probably will here soon. Go get yer some high school girls in a tank. A FREAKIN’ TANK. 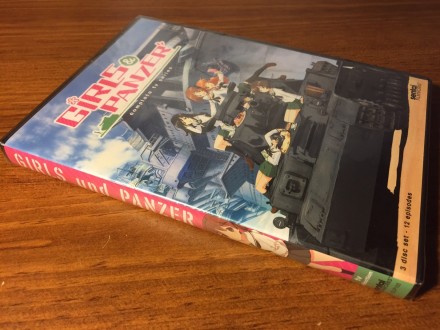 I’m not really too into romance/dramas unless they have other elements to them, but here’s a little title that I know nothing about. Why’d I pick it up then? IT WAS $5. It was limited edition (well, it’s in a hard thin pack box), English dubbed, and only $5. GUYS – 5 freakin’ dollars! It also had a decent rating on MAL if that counts for anything. Whether it sucks or not, I still think it’s worth the ridiculously cheap price. I hardly ever blind-buy anime, especially one this obscure, but I’ve paid less on a burger than what I just paid here. Check it out before it’s gone! 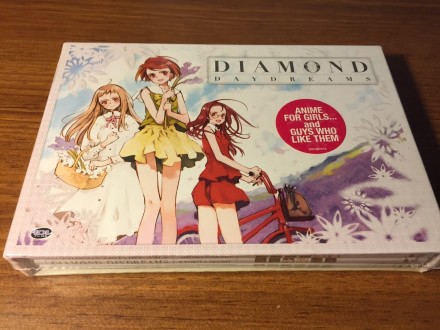 That’s all I’ve got for now. Pretty darn good deals, am I right? Whenever my next package arrives, I’ll post another haul post. I hope you enjoyed seeing what I picked up! Do you like anime hauls? Have you picked up any of the things I talked about? Let me know in them comments below, and until next time, this has been