A brief review of the 12-episode fall 2014 anime “Yuki Yuna is a Hero,” produced by Studio Gokumi, based on original story by Takahiro and Makoto Uezu.

For the third segment of Hero Week, I’ll warn you now that this anime is extremely hit or miss, especially if you’re familiar with Madoka Magica. Despite any polarizing comments I make, I’d like to let you know that this happens to be my favorite of the three Hero Week anime I’ve reviewed, regardless that it is indeed the “worst-written one,” should I even have to pick. I found that it had the most to offer, and I have to be critical of it because something that means so much should be sought in full light.

Five middle school girls—Yuuna, Togo, Fu, Itsuki, and Karin—are on a quest to save the world. That is, community service, volunteer work, and puppet shows for local children. It all seems trivial on the outside, but their Hero Club is determined to do good deeds for love, justice, and happiness, goals which are outlined and pursued religiously in the club’s Five Tenets. Such is the sweet and simple life of Yuuki Yuuna.

The club’s charismatic president Fu is living two lives, however, and upon phone call is forced to drag her friends into a mystical realm. There, they are to protect the God of the natural world and human blessing, the Shinju, from strange geometric entities called Vertexes. By the single tap on a phone app, the girls are transformed into the extraordinary heroes they so desired to be. But transcending the realm of God and obtaining unimaginable power comes with a price almost not worth paying.

As the girls fight for their lives and the people they love, their perception of the world dramatically warps into a cruel land of delusional grandeur. In the depressing struggle for power, the girls might have to point their guns at beings besides the Vertexes in order to preserve their very belief of what it means to be a true hero.

One of the biggest problems I had with Yuki Yuna was the lame world building. Had I not read the summary provided by Crunchyroll, I wouldn’t not have noticed that the story is set in the far future—YEAR 300, the Era of the Gods. WHAT, but it looks like modern-day Japan?! I enjoy it when stories have good reasons to break the rules set by the setting, but you can’t rebel against an outline that otherwise doesn’t exist!

My second beef with the anime was the lack of each girl’s unique drive to be a magical girl. They just sort of accepted the role because of the club’s influence. Individual motive is largely what make hero stories interesting and standout, so to have such weak trope characters (besides Fu and Togo) was a huge shame. For instance, what if the wheel-chair-bound Togo wanted to keep fighting because she could walk once again? That’s much more compelling than “I’ll do it because Yuna needs my help.” The way Yuna clings to the club tenets is also a bit cheesy and a weak excuse for ‘development.’

This is obviously less apparent if you are unfamiliar with it, but the last somewhat spoiler-free issue I had were the painfully obvious similarities to Madoka Magica. The magical girl system, character destinies, and dark, depressing themes in the second half all have strong correlation with its critically-acclaimed predecessor. Heck, even the music (which is still really, really good) and the animation sometimes feel like snippets borrowed from Madoka. While it is occasionally disappointing, Yuki Yuna managed to have fun longer than Madoka did, heavily maximizing its slice-of-life side for the earlier parts. And while I wanted darker, more twisted, nastier Madoka narrative, watching those girls have fun was what I needed more.

On a positive note, the animation was surprisingly incredible. The Vertexes themselves are CG, but because they are basically Evangelion angels crossed-over with the zodiac, it all works to create a fantastic off-putting vibe. I also appreciated the vivid color patterns for the Shinju realm and the cool magical girl outfits (Yuuna’s elegant armor was actually what got me into this show). The style was more rooted in Asian culture (petals, shrines, zodiac), while something like Madoka featured more European-like classical culture (columns, gates, witches). 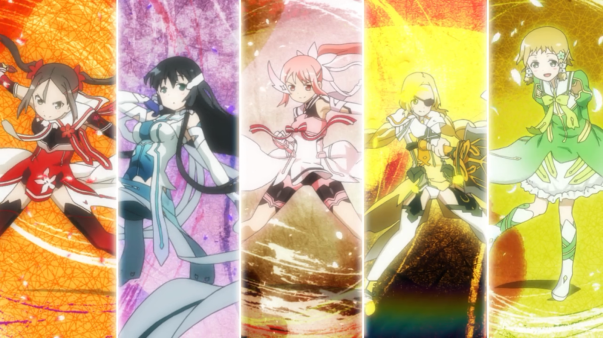 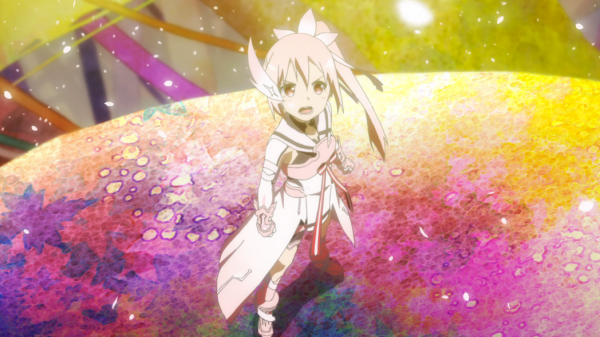 Much of Yuki Yuna is unexplained or at least not evident in the anime adaptation. Should the prequel light novels and the sequel manga ever make it here in the U.S., then I would be thrilled to revisit the franchise. Its fascinating world and the somber warriors fighting to protect it have so much more depth to them, and that lack of depth in the anime hinders a truly wonderful experience. The entire story and production of Yuki Yuna also has too many underdeveloped and forced ties to Madoka Magica, which sadly tampers with the mind-blowing aspect of it.

As a fantasy, drama, slice of life magical girl anime that attempts to see Madoka in a different light, I can appreciate all that it tried to pull off. It tackles the painfully realistic hero themes in the most interesting (and very dark) way that just excites me, yet also has rare moments of joy for our characters and a real built sense of unease instead of just scary/dark imagery like Madoka. Even though it stumbles in appreciating loss, we do wind up with one solid ideal: Ultimately, fight for what you want to save, not for what you are burdened by.

“You know that the fairest flowers fade first. But I made it.” – Fu Inubouzaki (best girl)

I award Yuki Yuna is a Hero with a benefit of the doubt 8/10, narrowly allowing it to breach the “Caffé Mocha” classification. It combats the fantastic with heavy ideals and characters that are honestly cared about (can’t say that for most series). Yuki Yuna won’t impress all—most are quite hard on it, actually—but I still encourage people to try it out especially if you like the wildly mentioned Madoka Magica. I’ve been forgetting, but both ERASED and Yuki Yuna is a Hero can be viewed for FREE on Crunchyroll! While I’d LOVE to own it on DVD, Ponycan is releasing these ‘premium’ sets with an okay English dub for a ridiculous $70 each—AND THERE ARE THREE OF THEM. How do you think Yuki Yuna did? Also, do you think Yuuna is a good hero? How about the other girls? Comment below!! Until next time, this has been