A spoiler-free review of the spring 2015 anime “Food Wars! Shokugeki no Souma,” produced by J.C. Staff, based on the manga by Yuuto Tsukuda and contributor Yuki Morisaki.

I like to cook. Granted, I’m no master chef, nor do I really know what I am doing half of the time, but I find enjoyment in starting the rice cooker and chopping up some lettuce. Lather on some soy sauce and you’ve got yourself some tasty stuff. In fact, I’ll be right back . . .

Shokugeki no Soma centers on Yukihira Souma, a 15-year-old practically raised in his father’s local Japanese restaurant so that he’ll one day take over the family business. That’s no fuss for Souma because he loves cooking and dreams that nothing will ever change. But when his sly father suddenly closes down shop for a bit to play chef in America, Souma is challenged by his old man to attend Toutsuki Culinary Academy, which considering its incredibly slim 10% graduation rate, is basically hell itself! As Souma dives into delicious, daily tests and mouthwatering missions, he makes new friends and even more enemies, but will his father’s teachings be enough to pull him through the first semester? As long as he wins the Shokugeki!

So what is a Shokugeki? It’s a famous Toutsuki tradition that has withstood the test of time. Essentially, it’s a cooking duel initiated when two persons need to settle a dispute. They are judged by an unbiased panel and all the clashing chefs have to do is muster their culinary expertise to best their opponent AKA a game of whose food tastes better. This is where the anime gets its fire. The acclaimed battle-roulette shounen is fueled by these steamy competitions of trial-and-error and sheer willpower!

Shokugeki proves that resolution and “courage” are not enough to win one’s case, however, and that’s what makes this anime excel from other shounen with the same stunts. An incredible amount of cooking skill, familiarity in the kitchen, and knowledge of spices that I’ve honestly never even heard of are necessary to simply blend in with the crowd, let alone actually surprise one of the scary judges! I mean, it’s still a school, so I would hope that they are learning to grill my steaks properly.

Souma thinks he’s a wise guy, taking after his son-of-a-buck father. He’s pretty damn smug during his entrance speech, proclaiming that he doesn’t plan on losing to “some bunch that has never stood in front of clients” – That’ll earn you a rep no doubt, because now the entire student body wants to slit your throat! Cocky as he seems, Souma’s got one thing that none of the others have. Passion? Nope. Talent? Not that. A hot body? For this spiky redhead, hardly. Souma wants to support others, and when your egg omelet determines your fate, that’s a rare treat in a guy. Even though he’s a dumb fool, ‘he helps others find their feet so that they learn to stand up on their own’ (as one reviewer sorta put it), specifically speaking, the clumsy yet sweet Tadokoro Megumi. The rest of the characters are pretty much store-bought stereotypes, but in the case of Shokugeki, that’s not a bad thing at all! There’s the tsundere “God Tongue” Erina Nakiri, the critical queen of Toutsuki who seriously needs a new nickname; Nikumi the “Meat Master,” a busty servant of Erina who trust me, knows her way around meat; Tadokoro Megumi, the already-mentioned endearing ‘freshmeat’ of the pack who, at first clings to Souma’s apron like a stain, builds her own uniqueness and learns to fight on her own turf like a pro; Lastly Takumi Aldini (the Italian stallion) who remains Souma’s poke-fun-of rival in this shounen.

I didn’t even get to mention the cool Polar Star Dormitory pals, but there are so many other exaggerated and outrageous cutouts that benefit this particular story genre. If you know shounen anime enough, then none of these characters are necessarily fresh. That doesn’t stop these chefs from being entertaining and downright amazing in their own right, though. Their uniqueness often adds an extra layer of hilarity! 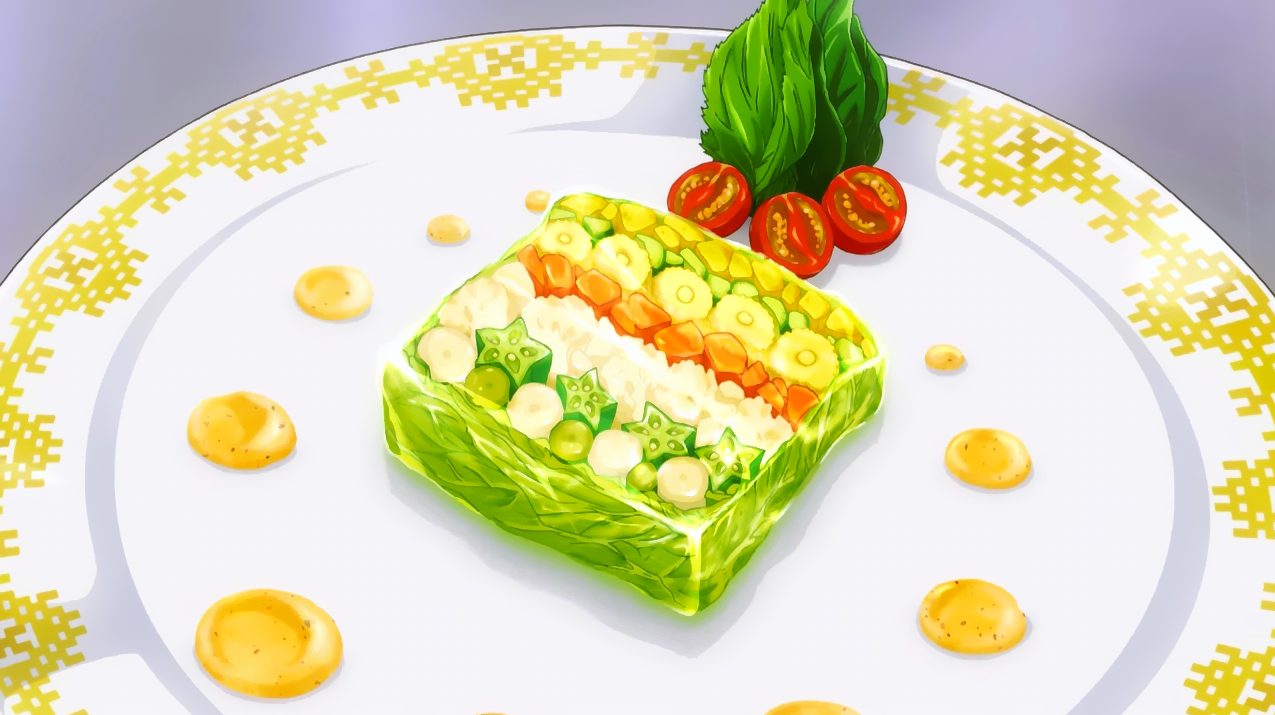 Composer Tatsuya Kato is a genius, simply put. I especially loved the way he incorporated Western-inspired tracks to this show; the soundtrack only makes it more flavorful (awesome trumpet and strings)! Disappointment, rage, awkwardness, celebration, competition, grandeur – it’s all here, and expressed with such invigorating fervor. While watching, I wanted to stop and scream just how incredible this OST is, but then I’d be missing out on another bite of excitement.

And all of these delightful features are carried by tasty openings and endings. My two favorites were the first two, opening “Kibou no Uta” by Ultra Tower and ending “Spice” by Tokyo Karankoron. Watching this anime each Saturday morning as a simulcast, this opening was such a great “good morning” call that I had to download it as an alarm. My sweet little “Spice” also charmed me early on, and I loved the dinner table scene at the end.

With incredible amounts of five-star food, unnecessarily high degrees of tension, and FAN SERVICE OUT THE WAZOO, Shokugeki constantly delivers fun and flavor! At the end of the day, it’s all about a boy who practices to surpass his father. So rather than blindly recommending this fantastic treat with two open thumbs up, I instead refer Food Wars! to those who want fun, but don’t want change.  The outrageous reactions to the food, the bouncy animation, the blazing competition – It’s all to delight in! But the story of the Shokugeki is much more than that; it was the incalculable trial and error – blood, sweat, and tears – over and over again that made this anime shine above the rest. “…repeating trial and error and failing many times…it’s that process which makes the dishes shine.”

While characters know hardships, the show never lowers its light to become a negative influence. Take it like a nice, home-cooked meal: The food is ever-changing, but the heart never falters. I also learned some neat kitchen tricks! If you’re looking for some grilled competition and true comedy, yet ecchi fan-service doesn’t bother you too much, then try dipping into Food Wars! You’ll find that it doesn’t need any extra salt. The flavor is just right.

“Don’t think of unnecessary things, just make a dish that suits you!” – Souma to Tadokoro

+ Yukihira Souma is a character that you’ll naturally want to cheer on, which is the goal for any shounen anime

+ Entertainment value is through the roof, so long as you don’t mind ecchi, umm, ‘plot’

+ Animation quality is absolutely incredible! The food will make your mouth drool and characters will make you giggle so hard you vomit

+ A soundtrack so fitting that it elevates the stakes on every front, yet knows when to be playful, witty, or heartwarming

Thanks for reading my review, and I hope you liked it! “Happy to serve!” You can let me know your thoughts by dropping a comment below and/or sautéing that like button! The café rates this anime with a gratifying 9/10, so if you’re interested in Food Wars!, the entire show can be viewed on Crunchyroll for FREE! Now you’ve got nothing to lose but your appetite! Until next time everyone, this has been