A brief spoiler-free review of the 12-episode 2020 anime “Ghost in the Shell: SAC_2045,” produced by Netflix, animated by Production I.G and Sola Digital Arts, directed by Shinji Aramaki and Kenji Kamiyama, and loosely based on the manga by Shirow Masamune.

The Synchronized Global Default changed everything about societies all over the globe. Now, in 2045, the economic disaster continues to impact the human race as the world enters a state of “Sustainable War” via AI technology just to keep money in the pockets of policy makers. But, as the Stand Alone Complex world continues to prove, people really do not possess any idea of the capabilities of these AI—as well as the potential threats to their own privacy and safety—while living in this rapidly accelerating cyberization age.

As a result of the economic fallout, Public Security Section 9 was kicked off government payroll and reduced to hired mercenary jobs out in the hot American southwest. Given the opportunities to engage their enhanced cyberbrains and combat skills, it’s not the worst outcome for full-body cyborg Major Motoko Kusanagi and her partner-in-crime Batou. However, the emergence of extremely potent AIs with remarkable intelligence and physical might, dubbed “post humans,” just might be the global threat Section 9 Chief Aramaki needs to pull the old team back together again.

Off-the-grid sci-fi action and cyber crime dominate the scene as the classic Ghost in the Shell: SAC story returns with this latest installment. Don’t count your Tachikomas before they hatch, though, as this is far from the sequel longtime fans have been waiting for. Overrun with loud action stunts and a hardly tactical approach to most combat, 2045 may be the weakest entry thus far—and the switch to all 3D CG doesn’t give much to boast about. But, this is still a Ghost in the Shell story, mind you, and any GitS is worth watching if you love this universe like I do. 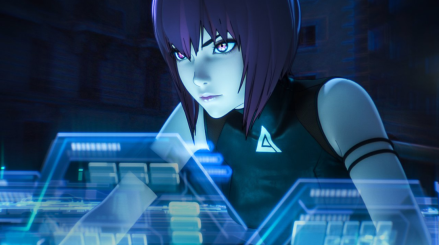 With a new Ghost in the Shell comes a new look for the Major. Although she doesn’t carry the same maternal air as the original SAC‘s Major, I do really like the pretty and iridescent quality that this Motoko bears. It’s as if the short bob and rebellious spirit of Arise‘s Major met the violet, cool-toned and commanding authority of SAC‘s. While Batou largely retains the same figure, including his signature prosthetic eyes, Togusa’s new look suits him quite well. I wasn’t particularly happy about hearing that his marriage fell apart in the time since SAC 2nd Gig (honestly the biggest crime here), but at least the shortened mullet makes him feel like a fresh man.

Perhaps my favorite single part of Netflix’s crack at GitS doesn’t even pertain to character designs, plot points, or the music—it’s the dub cast. Somehow, Bang Zoom was able to track down the all-star cast of the original SAC dub, including the incredible Mary Elizabeth McGlynn as BOTH the dub’s director and the Major herself. Add in Richard Epcar’s rough-around-the-edges Batou, Crispin Freeman’s rich yet naive Togusa, William Knight’s authoritative yet flighty old man Aramaki, and Melissa Fahn’s iconically squirrelish Tachikoma voice and, ahh, it’s a wonderful nostalgia trip. Mary Elizabeth’s Major really does embody the soul of this franchise. It was only after hearing the old Section 9 again that I was reminded just how much I’ve missed this world.

So, as you can tell, I wasn’t one to hate on the new character designs. The characters themselves aren’t necessarily here to be dynamic so much as to be badass cyber soldiers and carry out the plot (except maybe Togusa), and to each their own on that. But, if there’s one major gripe I have about the characters, it’s the facial expressions, which is a perfect segue to the show’s biggest controversy: the animation.

A Bold Switch of Style

As you may have heard fans gripe, directors Aramaki and Kamiyama decided to have all of 2045 animated in 3D CG. In addition to story focus and heightened emphasis on explosive action, this changed visual style makes 2045 feel even more removed from SAC‘s old roots. At what point do we stop calling it a sequel? I don’t even know where to begin on this one except for with the negatives.

For one, the lip flaps hardly match the voice acting—this is consistent across the English and Japanese dubs. Lots of dialogue may be spoken, but the mouth hardly moves. Now, 2045 can sometimes get away with this since A) half the characters are cyborgs, and B) much of the dialogue is communicated via connection to the Net, thus no need for spoken words. But even the most human characters suffer from a general lack of expressive facial emotions.

My second big gripe is that everything is CG. From vehicles and landscapes to special effects and the hair on a person’s head, it’s all been animated using digital technology. This means that, when something is textured, it’s generally done well and with consistency. On the other hand, when there’s no texture work, it’s entirely flat to the eyes. The production feels cheap as a result, sometimes gross, even if I know that it’s actually decent quality CG work being done here.

That said, I do, in fact, like the way this series looks (shocker, I know). Sure, I would’ve liked a more traditional approach with 3D CG modeling being used for a minority of the production rather than the only technique, but this isn’t all bad. Japan’s towering skyscrapers and clean, futuristic architecture have never looked better in SAC than they do here. The Tachikomas shine brilliantly, and the action sequences are also entertaining and very well choreographed (even if they’re ultimately no more than added popcorn material). Chances are most people will dislike the CG, though, especially if they came in with expectations of the franchise.

At Least it Sounds Great

Between writers and actors, it would seem that everyone came back to work on this universe again—everyone except for SAC series music composer Yoko Kanno. Thankfully, Nobuko Toda and Kazuma Jinnouchi carry the mantle of SAC with strong compositions in 2045. Between the jazzy interludes, lo-fi downtime, and high-octane cyber beats, I almost could’ve sworn it was still Kanno behind the keyboard. Toda and Jinnouchi also worked together on composing the score for Netflix’s recent Ultraman series, which may explain why 2045 also feels a little retro-punk at times.

As with the dynamic visual special effects work, the audio effects also fill in the sounds of this technologically advanced world. Whether the soft hum of a self-driving car on the highway, the relentless fire of Gatling guns, the blinking and honking of city sounds, or the digitization of bodies floating around in the Net, the sound design maintains a high standard across the series.

Waiting for the End

From the occasionally nauseous CG animation alone, it’s easy to think that this is a poorly directed series. 2045 is also not as philosophically explorative as its predecessors; rather, it seems to look smart by skimming the surface without postulating the further impacts and implications of people living by and through the Net. As opposed to genuine curiosities or worries about our future with technology, 2045 favors absurd thriller tones to engage its audience. I wish it were deeper and more full of wisdom like the previous seasons were, but 2045 is not that story. Maybe it’s not that great . . .

BUT, I don’t want to lose hope because I did enjoy my watch. Heck, binging 2045 on Netflix in a SINGLE SITTING was loads of fun—questionable CG and all—and I only wish I could’ve listened to more of the Major and her team exchanging witty banter back and forth. For me, clearly, the dub alone made 2045 worth watching.

As it stands, this is only half the story, so I can’t completely say whether or not 2045 is worth passing on. With the second cour green-lit but yet to be announced, I await the end of this new story with cautious optimism. When that day comes, I definitely plan on joining the Major once again. If Ghost in the Shell is your thing, you may want to consider putting 2045 on hold until the entire series is out. Otherwise, strap in—this ride is already proving to be a bumpy one.

You think I like this? There are too many unknown variables. It doesn’t smell right. But, then again, we always enjoy coming along with you for the ride—it’s the only reason we’re all here. — Batou

If that last quote from Batou doesn’t encapsulate my feelings on Ghost in the Shell: SAC_2045, I’m not sure what does. Until the second half can solidify my opinions on this series, I’ll pass 2045 as a “Coffee” rating for now. It’s mediocre at most points, but when it’s good, you may just remember why you fell in love with this series to begin with. Have you watched Netflix’s Ghost in the Shell yet? If so, what are your thoughts? Given how optimistically I tend to view this franchise, I’m eager to hear about them. Otherwise, ’till next time!