A brief spoiler-free review of the 22-episode summer 2010 anime “Shiki,” produced by Daume, based on the novel by Fuyumi Ono.

How would you feel about being given a second chance at life? Was there work you left behind unfinished that just needed a few more final touches? What about reuniting with a loved one from your past life? An opportunity like this rivals that of winning the lottery–a dream fulfilled, is it not?

Now, what if you were forced to return to this wretched earth, strained out of the dead to continue maintaining your fragile body at the expense of friends and family? You’d be a burdensome leech, a selfish and disgusting virus which feeds off of the innocent and the ignorant alike just to preserve your own rotting corpse. If you could kill people without consequence, would it be easier to do? Would you feel more inclined to repeat your actions?

Shiki presents us with both scenarios of life for the undead, but its grim tone and somber character stories have us believing that life after death is truly and rightfully morbid.

This tale of madness descending is set in a remote rural village isolated from “modern” society. (We’re talking a town with traditional wooden Japanese houses and only one clinic to visit in case of emergency.) From the get-go, we already know that what will happen in the village will stay in the village. At first the atmosphere is cheery, starting us off through the eyes of hot n’ dangerous teen Megumi, a girl who feels like an outcast among the villagers because of her fashionable and trendy fantasies of city life (quite relatable, might I add). She lusts after a transfer student by the name of Natsuno who would be, as anyone could guess, charming yet mysterious “boyfriend material.” But much of her young life changes when an enormous castle-sized mansion is built almost overnight–the extravagant yet seemingly-elusive Kirishiki family has moved into that vacant lot high in the mountains. They are reserved and elegant divas of the night, but what terror, if any, lies beyond their walled stronghold on the hill?

And exactly like clockwork, strange disease and paranoia begin seeping through the cracks of these closed-off country minds. Villagers grow pale and unresponsive, only to pass away within days of their diagnosis! All of this perplexes our [arguably the] main character, the good doctor Toshio, and his battle against these unseen and mystical forces quickly causes his ironclad rationale to teeter on the edge of self-destruction.

Themes! Themes for all!

The story is loaded with conflicts of the individual vs. culture and society that would make any philosopher or English teacher quiver in delight. If you continue to dissect its characters apart, you’ll notice a healthy amount of psychoanalysis to be done. There’s also the very nature of these vampiric beasts that’ll surely give you goosebumps if you’re just in it for the action. All things considered, Shiki’s premise is well-crafted and cleverly presented through its many different viewpoints. The anime tries to handle the scenario through every set of eyes possible, and actually does a fair job at it.

If this show is trying to preach one lesson to its viewers, it’s that OCCUPATION SHAPES PERCEPTION. First we have Toshio the Rational who wields science and logic as his guiding torch. His hands-on experience and repeated failure with his patients shape his view on how the village should act. Given this firsthand account of horror, the trauma is enough to eventually shake his mental stability. “Empty your hearts. In order to kill these demons we have to become demons.” Then there’s Muroi the Romantic writer and priest who believes through feelings that these demons are just like us. Even now, they only have special requirements to live. His benevolent approach leaves him without any clue as to how to fight a back, however, for his inexperience and urge to document the case rather than seek justice cause him to remain sane but forever alone.

And finally we have Natsuno and Megumi, both Angsty Lovers who embody mixes of the doc and the junior monk. They remain rational and understanding of all that takes place, but their struggle against striving for the lives they desire to live under supernatural circumstances leads them to consequence. All of the villagers, save for these four, are static characters designed to move the plot forward and advance growth in our leads. 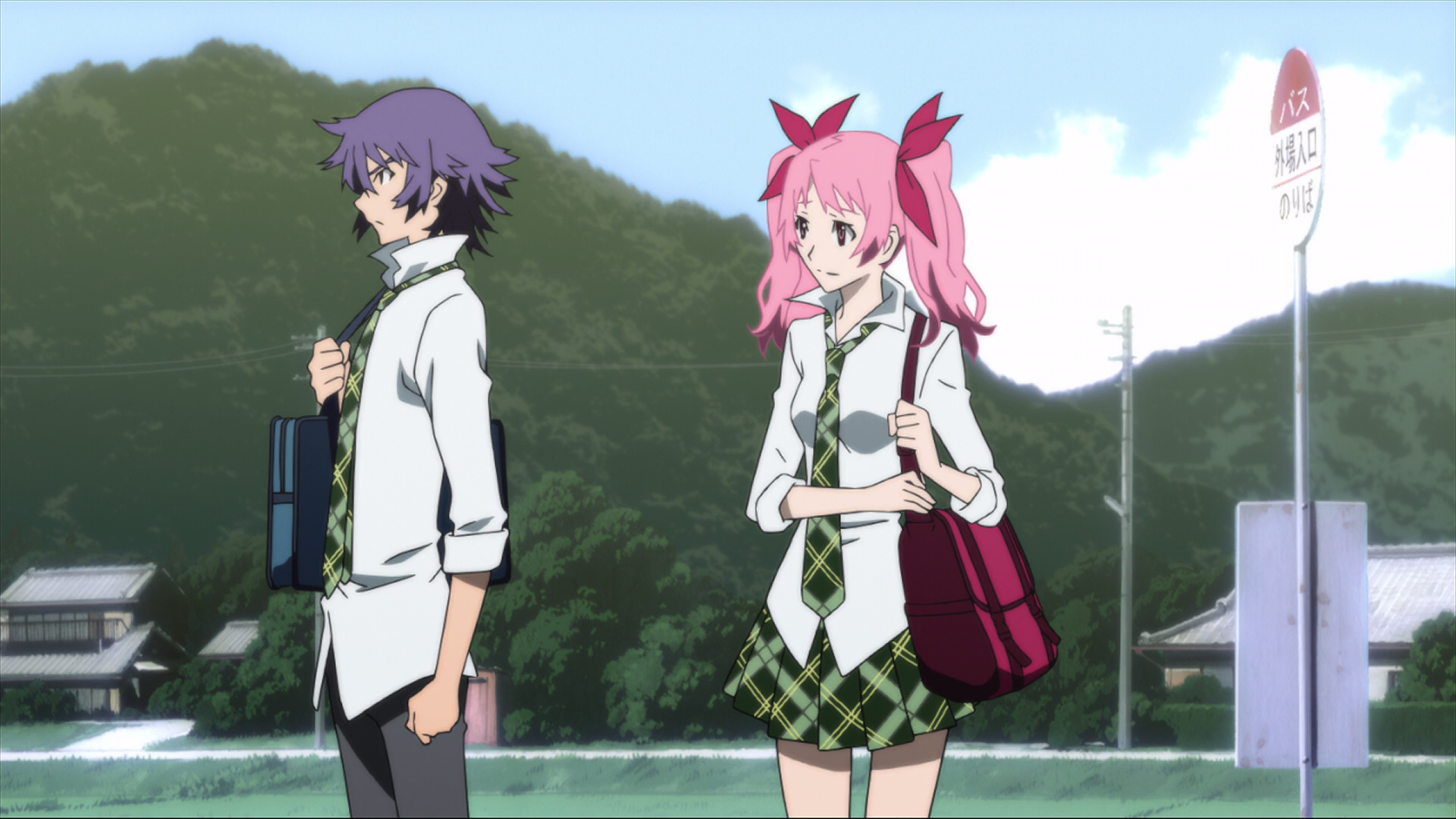 A fair point is that I fell in love with the English dub voices before I did the characters, so props to FUNimation for that win–especially to Tia Ballard as Megumi, holy crap! Also, while there are a dozen characters that I loved (and a dozen that I hated), my heart goes out to nurse Yasuyo (yay for more Wendy Powell!), the busty, compassionate sweetheart clad in fishnet-leggings. What a frickin’ saint she is! Relying on Story Horror Rather than Visual Horror

Onto the animation side, studio Daume actually did a very decent job. Several excellent cinematic shots and moldy/bold color choices were used to convey the eerie atmosphere. But I did have a few problems. As much as I took great pleasure in the Shiki black ombre eyes, too many different kinds of eye styles made me really dislike the ugly, small-pupil look that was overused on “insane” characters. Also, what’s up with that hair shaping? Natsuno’s nasty cut reminded me of the salad leaves I was munching on! (Yes, I did tweet about this).

I’m sure you’ve heard Shiki’s main theme “Shi-Ki” in one of your “emotional anime music 2 hours” compilation videos. But don’t just stop there! Check out the melodramatic tracks I left below which utilize a haunting choir, chimes, bass drums, a soothing macabre orchestra to create the illusion of nightmares stalking the shadows. They are a bit overused, but hey, you get so consumed by the atmosphere that repetition doesn’t matter. Composer Yasuharu Takanashi (Log Horizon, Oda Nobuna, Fairy Tale, Sailor Moon Crystal) remains one of my favorites, for he always does such phenomenal job in mashing together atmosphere and action.

Why is it Popular? Fresh Spin on a Legendary Concept

Shiki is praised for its ability to tell the same story through every character viewpoint possible; you get attached to individuals from both sides, which is quite a wonderful thing given the premise. It’s a nice rational approach to an ancient, typically fantasy or magical subject–The Science of Vampires, if you will. It presents us with a very well-thought-out tale of morality vs. rationality, never taking the easy way out to show its claims.

In a world where monsters and humans alike are pitted against each other, fear, especially of abandonment, consumes all who let it. Common people who are unwilling to let go of pre-existing notions are the ones that get left behind. It sounds harsh, but in this brutal and vicious cycle everyone except the sane ultimately lose. What draws the line between superstition and simply being afraid is how disturbingly far people will go to preserve their own “sanity.” It’s only after the smoke clears, however, that humans realize the error in their ways, and that any God has long since abandoned them . . . or at least some believe.

Anyone can die at any time; no one is safe/excluded from the elements listed above, which is also why I really enjoyed Shiki. Fear of uncertainty through the supernatural catches us off guard, in that fear CAN and WILL strike at any time. The use of gory sound effects and beautifully ghastly music help to establish that fearful tone. Shiki may not have visually scared me, but its raw content sure was creepy, gruesome, and more interesting than any Hollywood horror film.

“This is what a world ruled by order looks like. Those who accept order can live together peacefully, protected from the unknown safe in their belief that all is as it should be. But when something happens to threaten this orderly existence, they will fight to the very death. By eliminating the threat, they hope to preserve the fabric of their lives–the order that holds their entire world together. And so they realize what a fragile world it is.” – Seishin Muroi

+ Frequent tonal shifts, led by the many viewpoints, leave strong and vastly different impressions from beginning to end

+ Death can strike anyone, anytime

+ True fear and creepiness created by the supernatural STORY ITSELF, not necessarily the visuals (never takes the easy way out)

+ Wonderfully presented themes of morality between individuals, culture, and society, and how people are only as safe as their surroundings make them feel

+ Nailed the village horror atmosphere with frightful perfection; intricately woven web of characters and interactions between them and setting

– Eye and hair designs on some characters just looked dumb

– Fantastic and complementing soundtrack, but some tracks are a bit overused

What a Halloween break well-spent, no? Well, if anything could be said, it’s that those Japanese need real doors, not the paper-thin stuff you can hear through the walls, yikes! What did you think of this anime? It’s another “Caffe Mocha” over here! Were you completely freaked out or more invested in its thought-provoking messages? Let me know in the comments so we can talk about this beloved title! I’m so happy I got to finally watch this very peculiar classic. Until next time, this has been

Extravagant Divas of the Night, the Kirishikis