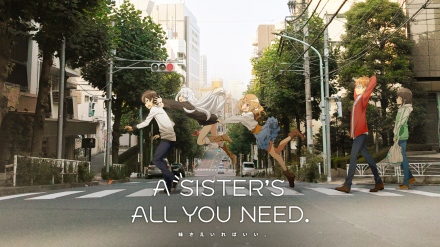 A brief spoiler-free review of the 12-episode fall 2017 anime “A Sister’s All You Need.,” animated by Silver Link., directed by Shin Oonuma, and based on Yomi Hirasaka’s light novel series of the same name. 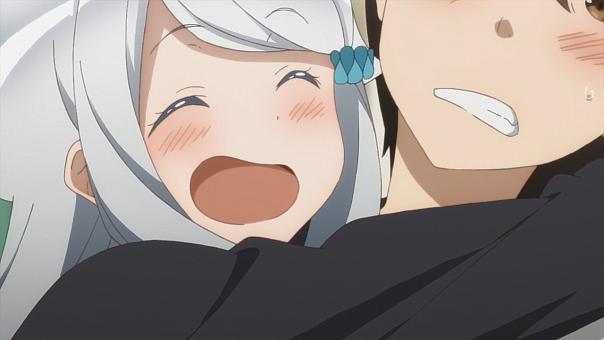 Arrogant, foolish, and always fighting his editor for procrastinating on deadlines, Itsuki Hashima is a light novelist in modern day Japan whose obsession with little sisters constantly finds its way into his stories. Despite his problematic personality and siscon fixation, the single 20-year-old author has garnered a tight circle of friends: Nayuta Kani, a young genius novelist yet grossly perverted girl who’s head-over-heels for Itsuki; Haruto Fuwa, a fellow male light novelist who frequently sees success with his series; Miyako Shirakawa, a friendly girl Itsuki met during his brief time in college; and Chihiro, his LITERALLY PERFECT younger step-brother who comes over on occasion and takes care of the housework and cooking. 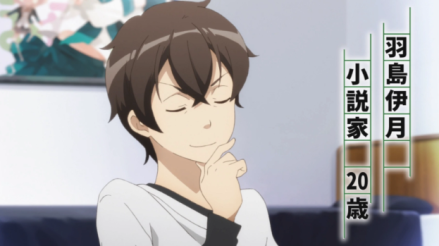 The overarching story of A Sister’s All You Need is simple: watching Itsuki and his friends find success with their work. Almost episodic in a sense, we follow these struggling authors through severe cases of writer’s block, the rare advent of dealing with another’s prosperity, and of course, deadlines. How each of them tackle these various problems speak volumes about their characters; Itsuki escapes to cultural hot spots around the country as sources of inspiration for his siscon trope story, while Nayuta gets her writer’s high from, well, “feeling up” another girl’s naked body, usually Miyako’s. (Yep, the wildly perverse girl, definitely a light novel staple.) Either way, they seek out their creative boosts by reminding themselves of their, errm, other passions, and that’s where the comedy (or enlightenment) ensues. 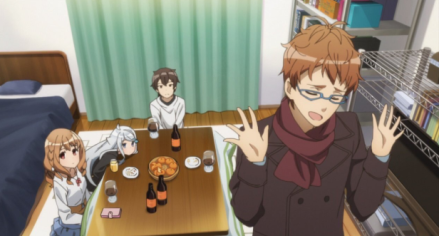 A Group of Friends is All You Need

I’m going to start by writing that I love these characters. They’ve got such rare, humorous chemistry together, and only when Itsuki’s apartment was full was I thoroughly entertained. That said, Itsuki is an incredible narcissist and resident little shit while Nayu is practically a whore. Any chance he gets, he shamelessly plugs his pitiful writing in conversation (usually while in a drunken storm), and Nayu? Well, she strips down. With her, it’s always boobs, butts, and dicks [insert me still giggling like a middle school boy]. It’s repetitive, almost obnoxious, and STILL, I thought they were fun characters. I adored having the shy and typically out-of-the-loop Miyako play the straight man (woman?), and I got a kick out of Haruto’s “online gay facade to attract more female fans” charade. It was all so funny to me—THEY are all so funny to me—and although the comedic gags are dumb, I still enjoyed our time spent laughing in Itsuki’s little apartment immensely.

Beyond the pervy foreplay and dick jokes, this series’s characters are some of the best of its kind: Haruto is a hard worker battling on the same front as his talented friends; Nayu is a gifted writer seeking a more personal connection beyond words on a page; Miyako is starting to find herself by venturing out of her comfort zone; and Itsuki still yearns for . . . a little sister? No, hardly. All he needs is a good group of friends, and fortunately for him, he’s already got that. 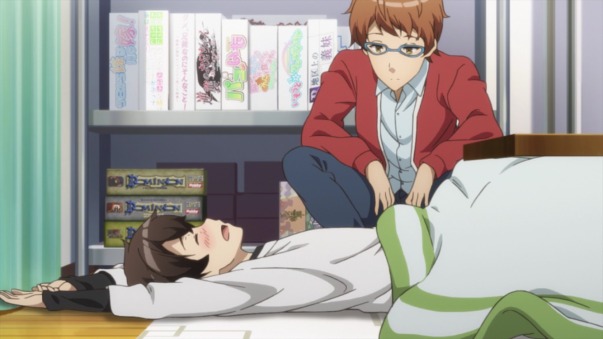 There’s NO WAY These Guys Are “Adults”

Is it just me, or do all of the characters in a Silver Link. work look like they’re ten years old?  Apologies, random point there, but the cute, underaged character designs continue in A Sister’s All You Need. Despite being a series about adults surviving on their own (except for Nayu, age 18, and Chihiro, age 16), all of the characters look like they could still be in high school. Itsuki, who is supposed to be 20, looks like a friggin’ middle school boy, and Haruto doesn’t look a day over 16 himself despite being Itsuki’s 22 year-old friend/rival. TWENTY-TWO YEARS OLD GUYS. And it’s even more conflicting when these full-blown “young adults” start going off on wildly inappropriate and lewd discussions about, well, whatever it is that gets light novelists going. 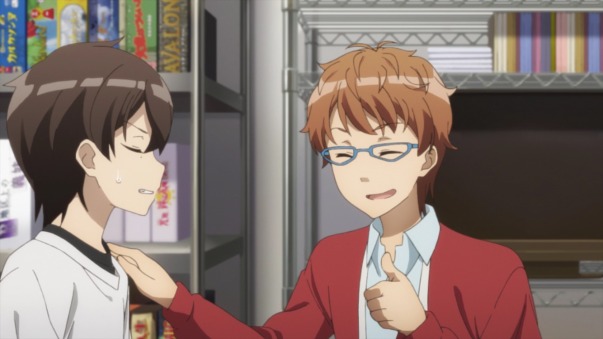 Although the visuals might disappoint adult viewers anticipating a cast of accurate-looking adults, the art style is still nice and easy on the eyes, even if the balance between seriousness and comedy looks very inconsistent at times. (I swear, there is never “one” Itsuki, as he looks different in every frame.) On the subject of comedy, each of the tabletop games the cast play are visualized in unique styles to bring them to life. Also, all of the games they play ARE, in fact, REAL board and card games, which is awesome! I love how a group of authors play such creatively-stimulating games—it makes the life of a light novelist feel all the more real! As you can expect, I ended up buying and introducing the storytelling card game “Once Upon A Time” to my own friends, and while it requires a good amount of mental stamina, it is tons of fun.

For the English voice cast, VA Stephen Fu overwhelmingly excels at bringing Itsuki’s narcissistic charm and asinine snarkiness to life. (Seriously, why don’t we hear from this guy more often??) While sounding a bit too old for Nayu’s character, I can’t think of anyone better than Jamie Marchi to make those insatiable lines just roll of the tongue. While I think Sara Ragsdale’s voice is not as full and confident as I’d like, I did find her extreme timidness here appropriate. And of course, it’s always nice to hear Eric Vale lay down some smack as Itsuki’s nagging editor, Kenjirou Toki.

Finding the Inspiration to Write Through Friendship

Underneath all its abundant layers of lewd nakedness, somehow, there’s something in A Sister’s All You Need. that makes me want to sit at the keyboard and write myself. I was able to find inspiration for writing in the most unlikely of places, and that to me elevates this seemingly ordinary, dime-a-dozen siscon anime based on a light novel to merit it worth the watch. For not particularly liking the little sister trope, I surprisingly enjoyed myself a great deal. You’ll also find yourself wanting to support fellow novelists after watching, or even become interested in light novel culture as a result! 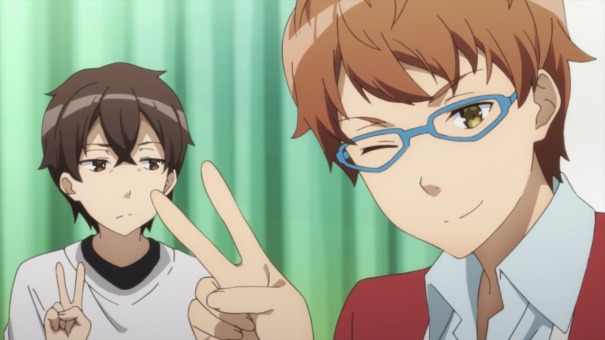 There’s also an interesting philosophical struggle tugging at our authors: whether to appeal to what’s popular—what people are currently into—and build yourself as a person to sell your books (Haruto), or to write exclusively about what you enjoy, even if that in itself might not appeal to a large audience (Itsuki). As a blogger, this is something I must always consider when publishing a post (though I’m usually the latter, as I can’t keep up with today’s standards haha).

At its worst, this stupid comedy series is downright weird and too far out-there to make any logical sense. But at its best, like when Itsuki [stops being a self-indulgent ass and] legitimately wants to try his hardest as to not fall behind Haruto or Nayuta’s immediate successes, it’s surprisingly a very compelling, almost inspiring, story. Victory and defeat come hand-in-hand, after all, and the publishing world is not exempt from that law. The biggest problem with the series right now is that, like most light novel adaptations, the story of Itsuki and his friends is far from over. This first season is but a hilarious, heartwarming glimpse into the perverted life of a light novelist, and I do hope author Yomi Hirasaka gets the green-light for a second season of his own work in the near future—and that he, too, will celebrate his success with good company, games, and a round of drinks! 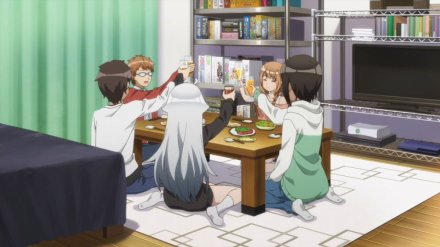 What you want, someone always has. And usually, it means nothing to the person who actually has it. It’s pretty much a miracle when you have what you want, and most comedies and tragedies happen due to the absence of that miracle. It may not be fair, but that’s just how the world works.—Itsuki Hashima

With all its light novelist insight, comedic overtones, homoerotic undertones, and dick jokes abundant, I confidently recommend this silly light novel adaptation as a “Cake” here at the cafe, as its characters lay down fascinating intentions and promising developments straight from the start, plus it’s hella funny. Just like Itsuki’s outrageous little sister stories, there’s a “mysterious appeal” to A Sister’s All You Need., and I consider it a miracle that I admittedly enjoyed it, let alone to the degree that I did. It’s simply a fun series, and if the premise of authors drinking and playing tabletop RPGs together intrigues you, all the more reason to watch it! 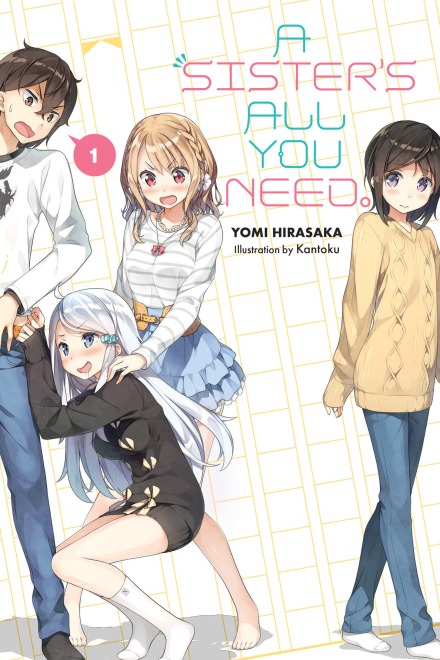 Surprisingly, the anime baited me into buying the first volume of the light novel series recently published by Yen On, so that’ll be an exciting read which I’ll definitely write about if the new developments are fulfilling enough! But what did you think about this lascivious little series? Did you find it too dumb ‘n dirty or hilarious and oddly pleasant? I’d love to hear your thoughts! Thanks for reading, and until the next time, this has been