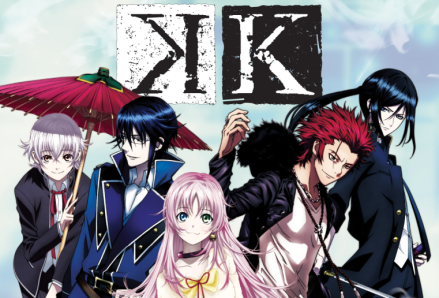 A brief spoiler-free review of the 13-episode fall 2012 anime “K,” animated by GoHands, directed by Shingo Suzuki, Hiromichi Kanazawa, and Susumu Kudō, and based on the original story by Tatsuki Miyazawa (and GoRA).

Yashiro Isana seems to be an ordinary boy—and as far as he knows, he is. When a video of the unassuming white-haired teen maniacally shooting a young man is broadcast all across the net, however, “Shiro” finds himself in the midst of a manhunt. To make matters worse, his predators aren’t your typical PD, but rather various vengeful members of the Seven Clans of Color. Ruled by seven unique Kings, these psychic clans are truly the ones responsible for making Japan the technologically advanced superpower that it is currently is.

Wanted for supposedly killing a Red Clansman, Shiro is hunted by the Red Clan as their King, Mikoto Suou, faces his own grievous trials in Blue Clan captivity. Also out to weigh the justice of Shiro’s crime is the infamous “Black Dog” Kurou Yatogami, a skilled swordsman determined to follow the will of his late master, the Seventh King. As Shiro struggles to prove his own innocence for a murder he doesn’t even recall committing, a strange conspiracy starts to unravel that calls his own existence into question. Far from concrete, perhaps memory is just as fragile as a floating cloud.

What started as a puzzling murder case spirals out into a war between supernaturally gifted Kings. Although this first series centers on the conflict between the fiery Red and tactical Blue Clans specifically, I have a hunch that later entries in the franchise expand upon this calamitous war of honor, duty, and brotherhood. Season one in itself has quite a high entertainment value on its own, however; if you were to stop here, you’d still be satisfied by these 13 episodes alone.

K primarily falls under the action and supernatural genres, but isn’t afraid to sneak in a joke or two here and there. In fact, the entire first half of the series—besides following the whole mystery plot about a boy trying to find evidence for a crime he didn’t commit—shows off the rather ordinary daily lives of Shiro and his classmates. It’s a peaceful beginning to what will eventually be an all-out war in the latter half (and subsequent adaptations). All the tensions gradually build to this superb midway twist, ending with a grand identity reveal and the inevitable, explosive duel between the Red and Blue Kings.

These first seven or so episodes are spent watching Shiro and Kuroh gradually warm up to one another, and the addition of the mischievous shape-shifting cat girl Neko adds a layer of gag comedy that’s surprisingly effective. I’d even go as far as to say the first half is stronger than the second, but that’s just me being picky—the whole narrative is tons of fun. Finding out how Shiro—unbeknownst to even himself—is deeply woven into the lives of all these characters is really cool. If you enjoyed any of the Science Adventure Series or Eden of the East, you’ll likely be entertained by K just as much.

Kings, Clans, and the Cat Girl

I’ll be up front with y’all, I had a lot of fun with this cast. Shiro’s an adorable and innocent little space cadet, yet holds an allure that you just can’t trust entirely . . . Due to his suspiciousness from the get-go, we are treated to an exciting narrative trick: the unreliable narrative. We can’t seem to want to trust Shiro 100%, even if we didn’t see him do anything wrong, and that’s half the battle we have to overcome. Shiro’s dub VA Sam Riegel completely sells the role, even if his voice is a little lower and more hollow-y sounding than you’d expect.

The rest of the cast is also PERFECT. Matt Mercer’s Kuroh is deep, but believably young-sounding for his age. Listening to him recite his Master’s teachings at the most odd yet pinnacle moments was hilarious—same for whenever he yells at Neko. Speaking of, Stephanie Sheh’s Neko is everything you’d want from a cat girl—and without being annoying, it’s great! If Kuroh’s view on Shiro is “Guilty until proven innocent,” Neko is the other way around, representing companionship, warmth, and trust for our protagonist. I could’ve watched this goofy trio dicking around in Shiro’s apartment for hours, their banter balances out so well. But alas, we have a story to tell—and a murder to solve.

I also love how the cast is divided into these Clans, which are, of course, colored by their respective attributes. You can expect Red Clan members to be hanging out in alleyways like a gang, roughing up opponents and violently trying to get their way in literally everything, no matter how childish. Blue Clan members are reserved, focused, and assemble formally at their base desks. They act as a vanguard of knights loyal to their King for his authority, whereas Red Clansmen protect one another out of brotherhood and respect for hierarchy through strength and acknowledgment by “the boss.” Color plays a bigger role in K than simply dividing the cast up.

On the Blue side, I enjoyed Johnny Yong Bosch’s devilishly deceptive Saruhiko Fushimi and Tara Platt’s sultry yet strong Captain Seri Awashima. For the Reds, Todd Haberkorn’s suave bartender Izumo Kusanagi and Benjamin Diskin’s *holla at ya boy* Yata Misaki were so much fun. Ahh, Yata, DAMN I love this little shit. 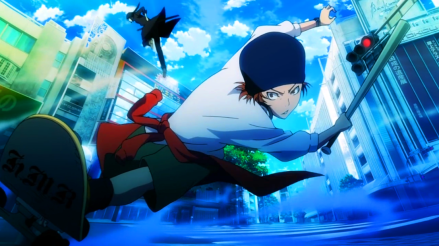 The Vivid Colors of K

Visually, K is just about one of the most unique series out there. Yes, the fight sequence animation is superb, and the character designs are very signature to each role. But what clearly stands out the most is the cool tone filter that overlays the screen 24/7. Some may find it irritating on the eyes, and I wouldn’t disagree—the bright color contrast and over-saturation can feel overwhelming. When your eyes finally adjust to this artistic decision, however, you find that this omnipresent blue-green color tone could only work on a series like K. The series is oozing with style, from the sharp uniforms and hairstyles to the meaning of color itself in the story. K has a one-of-a-kind aesthetic, and I am living for it.

Can I talk about the soundtrack for a minute, because wow, Mikio Endo really knew how to deliver the directors’ vision. K‘s OST is comprised of many laid-back jazz and bossa nova-inspired tracks which support the series’ chill atmosphere. Like the visuals, the music is stylish, but it isn’t afraid to pull out a little dubstep during the action sequences or some elegant piano work for the more intimate Clansmen scenes. It’s all great stuff, and angela’s iconic OP aptly titled “KINGS” kicks off each episode with excitement. Meanwhile the ED theme “Tsumetai Heya, Hitori” sung by Neko herself (Mikako Komatsu) nicely provides that dramatic sendoff we need.

Just as K is this tale of power and revenge, it is also the saga of redemption for vital parties on all sides of a dangerous war. I really appreciate the series’ attempt to fully flesh out the Red and Blue Clans and their collective attitudes and ambitions, as unlike with most stories of good versus evil, no one Clan is truly more virtuous than the other. At the end of the day, each of these characters value their pride, love, and trust for their fellow Clansmen to an equal degree; their respective Kings are just as admirable for upholding the lives of their comrades over the pursuit of power.

This isn’t an all-out war of good and evil—it’s a calculated power struggle between two forces that actually want to understand one another, yet ultimately cannot due to varying ideologies of honor and unity. Rather than fighting for glory, these Kings clash to protect their followers and friends, and I can respect that. Sure, the show feels a little rushed here and there, and there are A LOT of characters. But, this series really is so much more than your average action flick. (And all the pretty men, OOF.)

From its original mystery story and chivalric writing style (with a modern day twist) to its vivid animation and unique lighting design, K is a commendable project right from the start. As to where the story goes from here: I can only imagine that as more colorful and daring personalities join the fray, K will gradually transform into the great supernatural drama it was destined to be.

It’s not about a man’s appearance, or even what’s on the inside. My policy is to judge a man by his actions. — Kuroh Yatogami

So yeah, I liked K just as much as I thought I would! My only qualms would be that the story doesn’t hit “as hard” as it should when I know it’s trying to. Perhaps that’s just on me, but feel free to share what you like most about this series down in the comments! As for the cafe, I’ll gladly welcome K as a “Cake” title, one that is too sweet to miss out on. I can’t wait to explore the rest of what this franchise has to offer. I read that there’s a film, a sequel, and a series of movies after that—looks like I know what I’ll be doing these next couple weeks! Thanks for reading, and ’till next time!