A brief spoiler-free review of the 12-episode spring 2016 anime “Mayoiga” or its English title “The Lost Village,” produced by Diomedea, directed by Tsutomu Mizushima and written by Mari Okada.

While I didn’t watch every airing show this past spring season, I do know that many stirred lengthy discussions and debates. In the case of The Lost Village, you’re going to see my thoughts regarding a show which received so much negative feedback that some people even began to reinterpret its intention entirely just to decipher if it was actually clever or plain crap.

Simply put, I’m sure more people than you’d expect would easily raise their hands at the chance of getting to restart life in a Utopian village. And that’s exactly how Mayoiga begins: 30-some-odd children and adults chosen by an internet survey are gathered on a bus ride to paradise. This village lost in the mountains is so hard to find that even the police can’t seem to mark it on a map. Only a handful in our eccentric troop dwell on the sketchy project until they reach their destination — Nanaki Village. After all, the party is more concerned about how they’ll want to live once they exit the bus.

Mysteries start piling up one by one. The village seems to be abandoned, yet everything is orderly and the houses seem fairly clean. They also discover a recently-gardened patch on one end and bloody claw marks scratched into trees on the other. The forest in particular seems like it’s shrouding something. As if more tension was needed, some members of the party vanish without a trace, and like clockwork, it becomes only a matter of time before superstition and doubt plague the group like wildfire. Now begins their true test of survival, for monsters eagerly lurk within the minds of the doubtful run rampant whenever escape is attempted. Is it a curse? An illusion? Or are these seemingly otherworldly phantoms just messin’ with our heads? 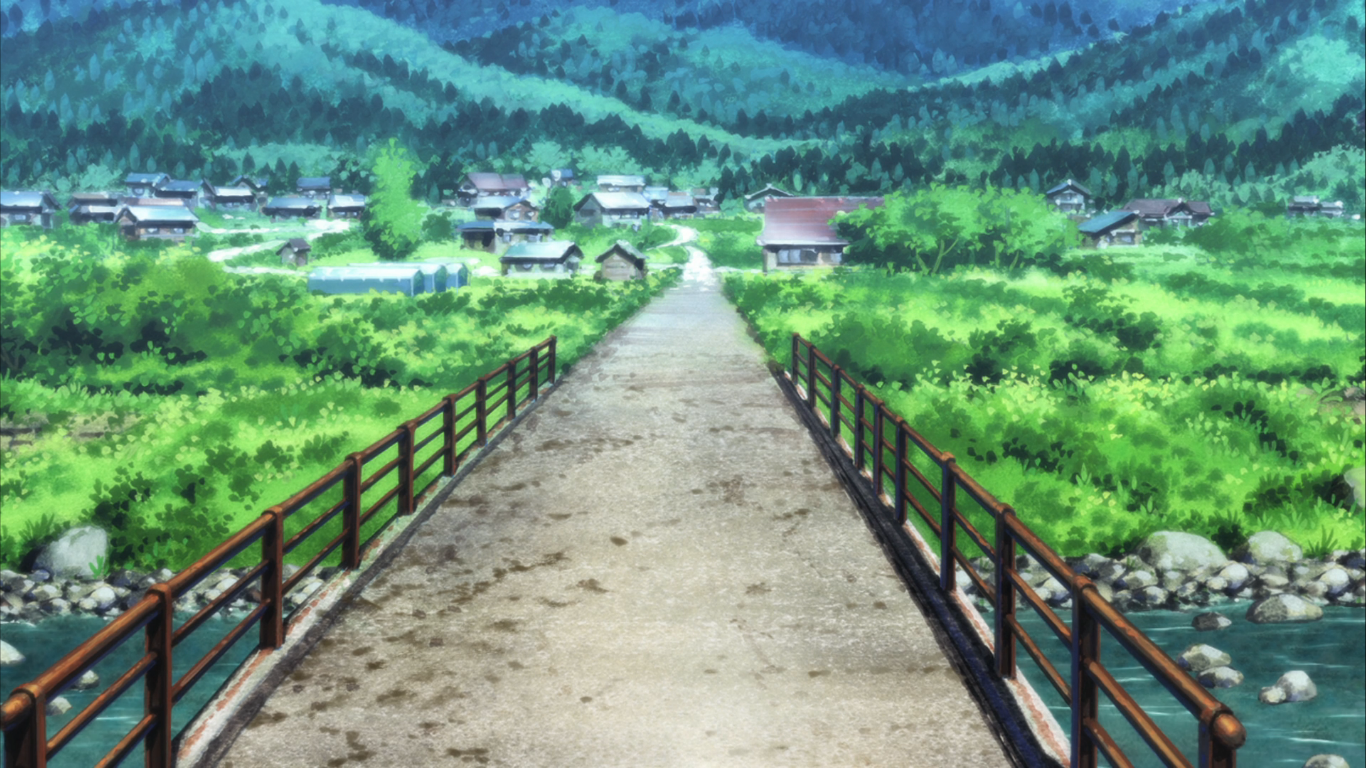 Does Mayoiga provide thought-provoking ideas? I’m still not entirely sure myself. On one hand there’s a certain level of personal acceptance that doesn’t go quite as far as I was hoping it would. Instead of confronting their past, they flee desperately, clinging to ignorance as bait. While its execution is unique, it isn’t all quite there. Perhaps you can lend it to the enormously underdeveloped cast, or maybe it’s the poor balance between character skepticism, village mystery, and heavy-handed theme. I suppose that’s why you end up feeling slight satisfaction for only half of the cast. The lack of character motivations (why they wanted to restart) for the remaining ensemble also didn’t give me enough reason to give two shits if someone went missing or died.

On the other hand, it’s also tackling superstition in that ugly Salem Witch Trial style. What prevents this ‘climax’ from being truly powerful is the fact that these guys are dumb. Plain stupid. Why can’t we talk each other — question each other, even — instead of raising a weapon? Unlike Salem, religion isn’t the issue here. Neither are societal bounds (cause they’re in the middle of nowhere). They’re all just FRIGGIN’ INSANE, dumping their doubt on one little shady girl in hopes that, like their pasts, the terror be offed.

I also can’t talk much about the characters due to spoilers. When I say that, I just mean the main trio: Mitsumune, Hayato, and Masaki. Mitsumune is an awkward soul, having only been friends with Hayato and not getting much contact with the female species. He really doesn’t know anything, but we can’t blame the unknowing, now can we? Hayato is a smart guy you’ll only find hanging around Mitsumune for his own reasons. Masaki, the group’s verbal punching bag, is a young girl rooted in a suspicious past. She also claims to not know anything, yet she is somehow tied to the village . . . I really don’t mind these three, but most of the others — especially that batshit insane execution girl — are simple-minded and annoying.

Going into it, my favorite was Koharun, the shady tour guide, as she really felt suspicious and I love feeling that way. By the end, though, that position was taken by the flirtatious [I swear she was a prostitute] woman with the high heels because EVERY SINGLE THING she said was sexually implied, and that’s just awesome. Her and the pudgy detective girl. She was pretty cool, too.

Now, the sheer illusionary work behind the animation team really makes up for the supernatural ‘talk’ the characters boast about. Raw CG was used like crazy in most of the nightmares that stalked the cast, and while that alone looks terrible, the fake appearance enhances the oddity and spookiness of it all. For once, asking the 3DCG “What the hell are you even supposed to be?” is a complement. Let it all rattle your brain. Outside that, characters look pretty nice — almost something out of P.A. Works — but the dialogue scenes are really boring.

Masaru Yokoyama’s soundtrack is by far the winning aspect of this series! Apparently he also composed the OSTs for Your Lie in April, Rampo Kitan: Game of Laplace, and Lord Marksman and Vanadis among others, so make of that what you will. His chosen style here is obviously mystery and suspense, as the main theme and its many renditions is especially haunting, the kind of “LET’S GET OUT OF HERE” music you need with a show like this. Sadly couldn’t’ find any tracks on the web but the damned Hippopotamus song (my heart goes out to thee as best song). Just know that the OST effective in establishing mood if the creepy village didn’t do that for you.

The opening “Gensou Drive” by Ami Wajima was also fairly good, though I much preferred the ending theme “Ketsuro” by Rina Katahira. It’s much slower, more wound down, and unfitting for the show’s overall tone, but I couldn’t help but look it up afterwards to add it to my playlist. Its position is similar to Parasyte -the maxim-’s ending: slow yet oddly yearning for hope. Visuals were boring as heck, but a nice song nonetheless.

At the end of the day, I’m just so tired of reading about The Lost Village. The community has exhausted me on this one — To quote Lovepon, “Grabbed each of my legs and tore in opposite directions.” I went in with a lot of excitement for a hot mystery show and ended up with a slightly twisted yet comedic take on rebirth. I’ll admit that it had me going for the first five or so episodes, but once the ghouls revealed themselves, it didn’t take off like I thought it would. Was I supposed to be scared? Maybe . . . ? But I still laugh that I tried watching this at night and got too scared to leave my room to pee, hehe.

The Lost Village is to say the least an oddball, and regardless of whether it was trying to be a satire of horror mysteries or something like that, I can confirm that it fell flat on its mission. I think it all just strayed waaay too far from the trail it seemed to promise, much like a wanderer looking for paradise who got lost in the process. As a simulcast, however, I cannot deny the fact that I kept coming back each week just to see how it would end . . . Like, the bus went up in flames, but how far would it roll down the hill?

Pretty far, actually. I can’t see it being brought up ever again after a week or two.

+ Given its composition, village mystery vibe kept up a good ¾ of the way in

– Poor balance between characters’ skepticism, actual village mystery, and themes it might’ve been trying to press

– Enormous cast with lack of believable drive and development from those move forward; stupidity is contagious

I’m slightly annoyed with Mayoiga as is, so you’ll find it here under the lowly “Breads” archive. It’s not bad, but there are so many other anime out there that explore the same concept, yet do it better. Like Angel Beats! for the personal acceptance stuff or Another for the superstition bit. The show also could have been interesting and made me have wanted to think had there not been so many troll characters. Did you follow The Lost Village this season? If so, how did you feel about its overall presentation? Until next time, this has been