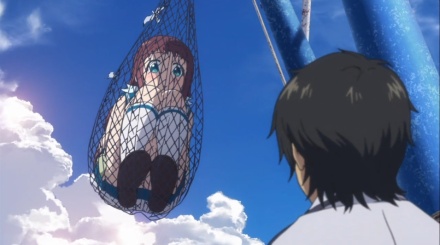 Another precious month of my summer as slipped by me . . . WHERE did the time go?? My fun summer life form is running low on HP, and in about a week it will reach zero. The cup’s almost out of coffee. The river’s almost all dried up. Why??? Because school starts soon (BOOOOO)! But don’t worry, I’ll still make room for anime between all of my homework.

For those wondering, my simulcast break has been absolutely wonderful. Like most, I hope that the season summer continues to be great so that by the end, I’ll have several more cool shows to watch, not that my list needs anymore ;). I have a couple of special announcements at the end of the update, so read on!

To the update, we got our recently finished shows:

Code Geass: Lelouch of the Rebellion (and R2) – Ah man, what to say? Bloody fantastic show from start to finish, I couldn’t have been happier. It was quite the undertaking, considering its 50-episode stretch, but oh boy was it worth it. I suppose I could just flaunt on and on about how much I love mecha now, and proclaim like a love-struck weeaboo that I know all of the ins-and-outs to the genre, but you’d be much better off simply reading my review of the series here 🙂

ALDNOAH.ZERO Episodes 1-6 English Dub – These were just my brief thoughts over the new dub for an anime that I enjoy, click here for more info

Puella Magi Madoka Magica Part 3: Rebellion – Okay, so I am one of the few who freakin’ loves this film, so it was a joy when the Blu-ray arrived in the mail. I had seen it previously subbed, and the English dub was incredible! All of the actresses did amazing jobs with their characters, Homura and Sayaka especially holy crap! I’ll probably never review this film just because I can’t ever wrap my thoughts into a nice bundle like with most anime, so yeah. I do like the premise of how the film ends – how Homura reveals her true love for Madoka since I felt the series kinda dropped that – but it was a little extreme in terms of execution for my tastes >.< Still, so happy to actually own the movie!

A Certain Magical Index: The Miracle of Endymion – I know this film is a boat shot full of holes, but I seriously love this franchise too much to judge. As long as I see the Railgun in action, I’m good for another six months. Like Rebellion, the animation is gorgeous, so that made the watch even more enjoyable. I love me Raildex 😀

Food Wars! Shokugeki no Soma – In the last couple of episodes, Soma’s master chef-of-a-father returns from the U.S. to test his son’s new abilities. The gang is also back at the school, which means stuff’s probably going down in the next couple of episodes. I think the show is still kickin’, and I haven’t got sick of it yet!

The Heroic Legend of Arslan – Hmm, this show on the other hand feels like it’s wasting my time. I mean, I still enjoy the story about Arslan growing stronger to become king, but there’s not enough bonding with Arslan’s party and development for him, so I find it somewhat hard to appreciate him. Agh, I digress, it’s okay.

Nagi no Asukara: A lull in the Sea – So this show has been on my watch list since the dawn of time, so I thought I’d get on it since a) I’m on my simulcast break and b) It was recently released with an English dub. I’m four or five episodes in, and OH MY GAWD that art makes Takuto drool 😛 Such a pretty show, and the characters and story aren’t half bad either. I pretty sure I’m in for a good ride

Now for those special announcements! One, I FINALLY FINISHED the Sword Art Online Light Novel: Aincrad Volume One! You probably don’t remember, but it was that DAMNED book I had been trying to cut down since I started blogging, and it’s finally OVER!! My brother bought me the second novel, so I will be starting that as soon as I finish my summer reading school books.

Two: This award floated back to the surface, and what do ya know, I had recently been nominated for the Liebster award again! Hooray! You can read my nomination right here if you’d like

And three: Ever since I started watching anime, I’ve kept and recorded a list of all of the anime I have ever watched and the season and year that I watched them in (because I think season affects the mood the series has on me or something). The list is pretty defunct now, considering that I have a MyAnimeList account to keep an even more specific account of my watching. But since it can’t sort the shows in the order that you watched them (alphabetical listing only), I still keep that my scratch list on hand as a memento.

Anyway, my point is that according to my lil’ list, I am on anime number 99, which I have designated to Nagi-Asu. When I hit 100, I’ll probably have a mini party of some kind because, why not!? 100 anime is a huge accomplishment for me! I have a pretty darn good idea as to what show I’ll watch for my 100th, but as my followers and friends, I’d like you guys to put down your recommendation for my next anime to watch! Also, if you remember your 99th anime, what did you watch?

I think that’s all I have to say for now. Until I finish Nagi-Asu, I won’t be reviewing anything . . . maybe another “Cafe Talk,” perhaps? How have all of you been? I’ve noticed we’ve recruited quite a few more customers to the cafe – you’ve chosen the right spot to hang out! Hehe, but seriously, thank you guys 😀 How has your summer gone besides so damn fast!? Let me know in the comments so that we can chat, but speaking of chatting with friends, real quick, my pal LitaKino uploaded a video on her YouTube channel as a live chat with the hilarious Gigi from AnimePalooza and a couple others. If you have the time or are looking for a dorky laugh or two, check out her video! Alright, now I’m done. Stay cool in this hot weather, and until next time, this has been