A brief spoiler-free review of the 27-episode spring 2007 anime “Tengen Toppa Gurren Lagann” or simply “Gurren Lagann,” produced by Gainax, based on original story by Hiroyuki Imaishi and Kazuki Nakashima.

Imagine your whole world being contained within a shabby cardboard box. There are no cracks, so light doesn’t penetrate through the sides, and inside the box is nothing but a floor of dirt. This is life, and it the only time-waster is digging deeper in hope of discovery.

Then one day, *chink!* “What is this?” You find a key buried fantastically deep under your feet. Perhaps you confused your increased heart rate with the rumbling of the box, but suddenly, the cardboard flaps burst open and a giant face gazes down on you. So what now?? With possibility erupting with every new experience, you rise to your feet and step outside the box. Is this a room? You run out the door. So this is a building? You flee to the street where an unimaginable light floods your vision. Shocked yet determined, the sun, the stars, and the ever-expanding universe await your exploring spirit.

Such is the story that Gurren Lagann tells, and it does so marvelously. In a world where people are forced to eke out a living underground for fear of what roams above, we hone in on a little boy named Simon who, among his grungy village neighbors and peers, is pitied as a quiet loner with no real dreams. He is just another digger, though quite skilled, who spends his youth drilling deep beneath the crust for artifacts long-lost. Any excitement in Simon’s life stems directly from his boisterous “bro” Kamina, a defiant ruffian with cool shades who remains hell-bent on leaving behind the village and scouting the wondrous surface.

And excitement is just what Simon gets when he uncovers a drill-shaped key and a giant robot head. Putting two and two together, Simon and Kamina activate the newly dubbed machine “Lagann” to fight against an even larger robot that falls from the surface. Amidst the chaos, the guys meet the red-headed rifle-wielding Yoko Littner, a girl who roams the upper lands.

Tossed into the sky by an enormous EXPLOSION, the vastness world above becomes clear to Simon and Kamina. Teaming up with Yoko and her gang, the grand struggle between the Gunman-wielding “Beastmen” and the renegade humans only intensifies until their rancor reaches the edge of the galaxy — and beyond.

Carving their names in history, the squad is always breathing on the edge of tomorrow. Their determination to live free lives under the sun, fueled primarily by Kamina’s leadership, allows them to stand such a miraculous chance against an enemy who has conquered basically the known universe. It’s an inspiring tale, that’s for certain, and watching Kamina take a shit on the “ignorance is bliss” message is half the fun. If you don’t know what it is, KICK ITS ASS. If it’s hot on your trail and stealing your women, KICK ITS ASS. Let nothing stand in your way of learning and growing as a human.

There’s not much else I can say about the story other than what I covered in the intro. I mean, it starts as a small quarrel in the bar, then gets moved out into the streets. Soon blocks are all fighting each other before it becomes dueling towns, kingdoms, continents, planets, galaxies — I think you get the picture. Each enemy is tenfold stronger than the one that came before it. The world’s energy, known as Spiral Power, can be seen as a metaphysical embodiment of inspiration, drive, purpose, intention — Whatever you want to call it, it’s about overcoming any obstacle, no matter the size. And I like that a lot. Gurren Lagann wants fate to be left in our hands, not in those of a third party observer.

The characters all range from as gentle and quirky as Simon to the bombastic Kamina to Yoko’s tech junkie (and rather gay friend) Leeron (who is, yes, my favorite character). Like its ever-expanding story, we’ll watch Simon go from boy on the sideline to a man in the front. He’ll borrow traits from the foes he faces and the allies he makes, but more prominently, Simon will not only step outside of Kamina’s brazen shadow, but cast his own in due course.

I want to say a lot about Kamina, but the only words I can use are “WHO THE HELL DO YOU TH–” okay fine, he’s simply a badass. Same is arguably to be said about Yoko, though I found the series’ latter half portrayal of her much stronger and less of a girl-with-a-big-gun fan-service token. I also forget Rossiu, a young religious boy, and Viral, a renegade with a Gunman, two chumps who’ll eventually cause a lot of trouble despite them having their own motives and ideologies. I didn’t care much for these two, but they were interesting to watch develop.

Rossiu in particular is an interesting case, in where he, like Simon, was forced underground not because their village leader was a power-hungry dick, however, but because it was the will of God. His actions in the second half will unfortunately reveal the toll his origins have taken on him, even though it’s far too late to call it justice. Considering its trigger happy mood, it was a dark part of the series that I basically wish didn’t even exist. 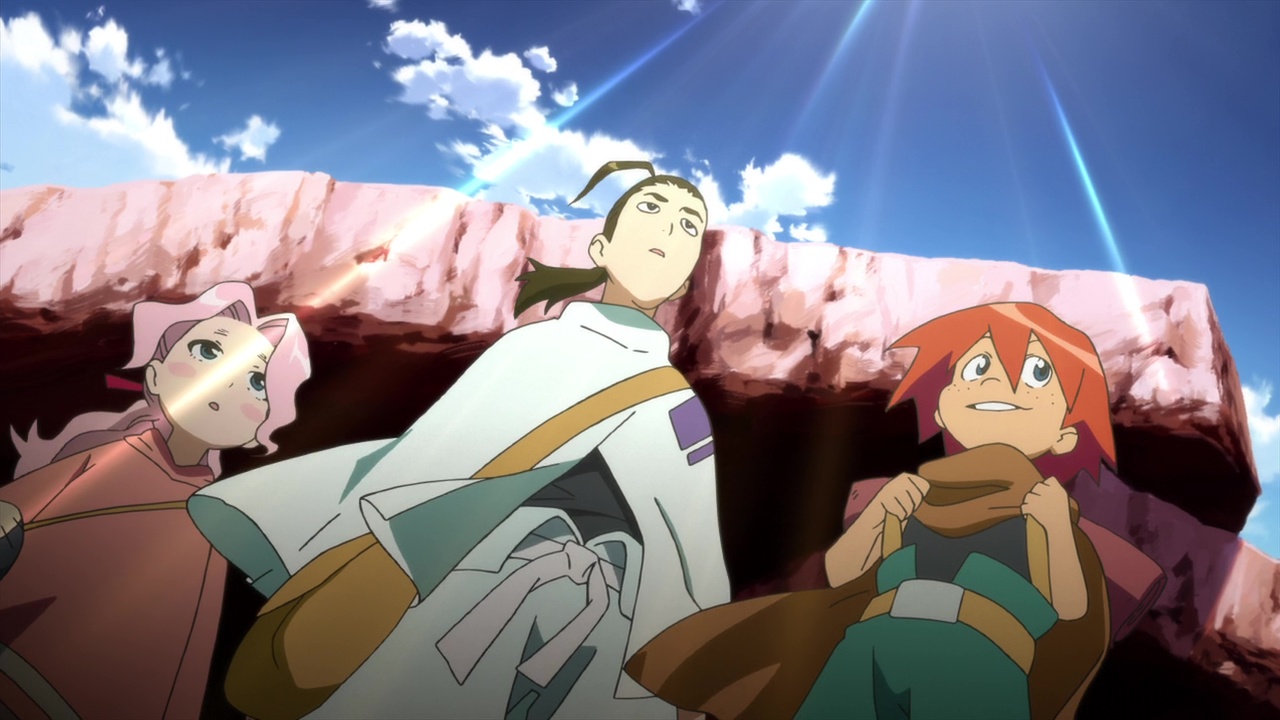 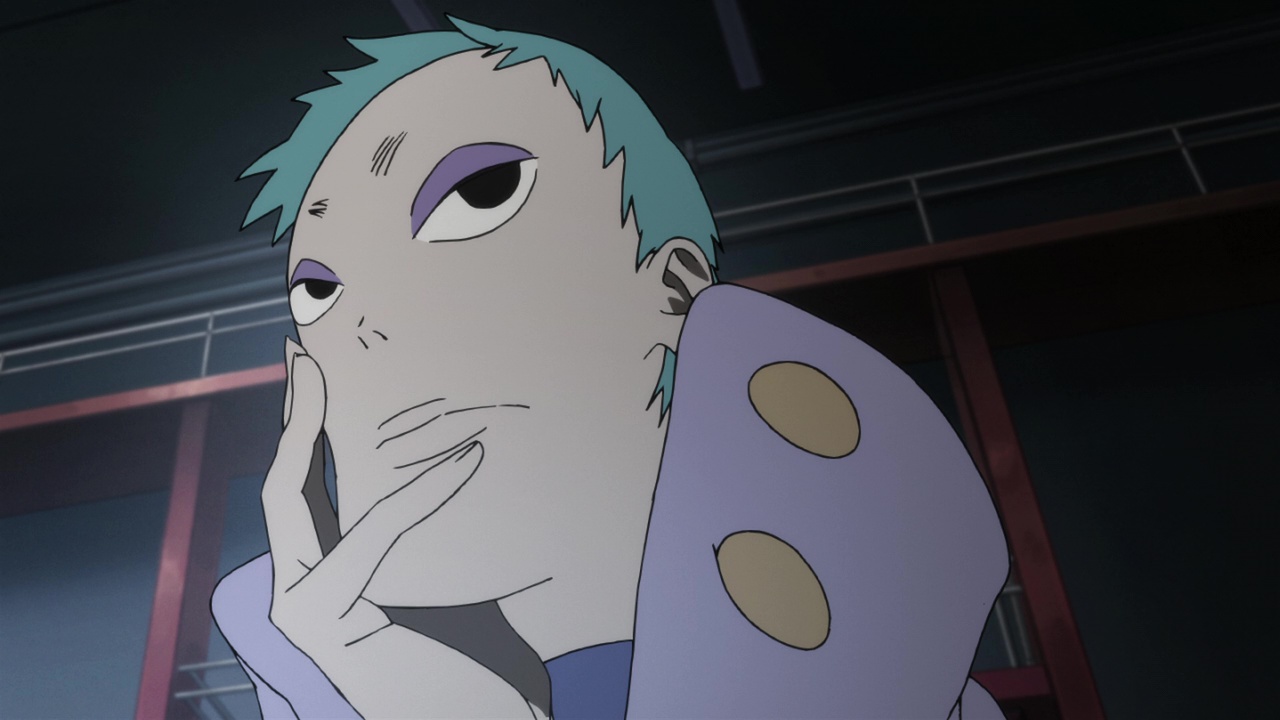 Both the animation and the music are very hit or miss this time around. As a fan, this was spectacularly animated (episode 4 tho?), and it was just as explosive as I wanted it to be considering KILL la KILL is its “spiritual successor.” Even though I think the Gunmen are pretty goofy looking, the colors are rich and bold to match its cast. I still believe that Lagann’s first episode is one of the most fluid and best-looking ones I’ve ever seen!

I do have to speak as a reviewer, however, and that voice of concern is in the character designs and movement. It’s very cartoony, so for people who only leech off of studios P.A. Works, Ufotable, and KyoAni (just to name a few), you’ll probably be quite turned off by the somewhat grotesque and angular designs. A side note: high quality is kept pretty constant throughout.

Favorites from Taku Iwasaki’s OST include the emotionally-charged anthem “With Your Drill, Pierce The Heavens!!,” the military-ready “BafBaf! Do You Like… Burning With Such Passion,” the operatic yet ruined-by-rap “Libera Me From Hell,” and my number one (which I believe best represents Gurren Lagann), “Fleeing the Hot desert, Team Dai-Gurren Can Continue.” The rest of the soundtrack is pretty skippable on its own.

Gurren Lagann can be viewed in two ways:

While it can be seen in two entirely different lights, both objects cast shadows that intersect at the crossroads of EXPANSION. It encourages us heartily to find the drill within ourselves — To reach deep down and just turn it on! If you want something, dammit, “Kick logic to the curb, do the impossible,” and just GO DO IT!! After all, “A frog in a well knows not of the great ocean (Negima!?).”

Lastly, I found Kamina’s signature advice to provide a nice peace of mind.  He constantly shouts, “Believe in the me that believes in you,” and even though he’ll later preach to just believe in yourself, I think it’s still a good temporary fail-safe for last-minute faith. In unsure times, relying on a friend who knows you’ll be okay is quite calming. All this and more is why I’ll recommend Gurren Lagann to anyone who doesn’t mind outlandish art styles and the mecha genre. While they won’t ruin the experience, per se, they are heavy plot devices. Have fun with that huge plot twist midway! Gurren Lagann is badass and tons of fun. And best of all, it puts possibility in YOUR hands. Go out and explore what this beautiful world has to offer.

“We evolve beyond the person we were a minute before. Little by little, we advance a little further with each turn. That’s how a drill works!” – Simon, just another digger

+ Ideas of crushing fate and owning your own future are explored thoroughly; ultimate antagonist should also prove thought-provoking

+ Absurd and bombastic journey with an incredible cast of colorful characters; Simon, Kamina, Yoko, and Leeron are just awesome

+ Explosive animation with fluidity despite the rough designs

– Art style is not for everyone

– Wish there were more standalone tracks, even though what we got was great

– Some actions in the second half add unnecessary negative tone

While Gurren Lagann is obviously a “Caffe Mocha” for me, what did you guys think of it? Also, man, it is hard to write a review about a show that has already +1,000 reviews in circulation! I tried, though, haha! What you thought about Lagann and/or the universe? Were you turned off by its quirkiness, or did you embrace it? And hey, if you enjoyed my thoughts, drop me a ‘like’ to let me know! I’ll totally be buying Aniplex’s DVD box of it . . . whenever my wallet pierces heavens. Until next time everyone, this has been

When does a man die? When he is hit by a bullet? No. When he suffers a disease? No. When he eats a soup made out of a poisonous mushroom? No! A man dies when he is forgotten.