Chances are that if you were linked here from another blogger pal, then you might be new. To those first-timers, “Hi, I’m Takuto, welcome to my anime cafe!” As part of the OWLS blog tour’s  eighth monthly topic, “Bloodlines,” I decided to incorporate what would have been my standard Hanasaku Iroha review into this discourse about “it runs in the family.”

Family means everything (or does it?). This month, we will be discussing the importance of family relationships in anime and pop culture. Familial relationships include a child and his/her parents, sibling rivalries, adoptions, etc. Some questions about family that we will be contemplating on include how does one’s family shapes his or her identity? How do we define family? How does a broken household influence a person’s view on family?

This show probably deserves a review all on its own, but hey, I’m just gonna go for it here! Thanks Lyn for the prompt!

A brief discussion on the 26-episode spring 2011 anime “Hanasaku Iroha: Blossoms for Tomorrow” and the 2013 film “Home Sweet Home,” produced by P.A. Works, directed by Masahiro Ando (Blast of Tempest), based on the original story by Mari Okada (A Lull in the Sea).

Out On Her Own

Ohana Matsumae: bursting with rebellious energy and only 16 years old, her picture-perfect Tokyo life could’ve been every girl’s dream—if only her mom wasn’t such a mess! Carefree, irresponsible, and always on the go, mother Satsuki Matsumae and her boyfriend hurriedly pack their bags to flee from debt collectors, forcing Ohana to seek refuge out in the countryside at her grandmother’s Kissui inn. It is there at the Kissuiso that Ohana forms the resolve to work hard under her grandmo—I mean, Madame Manager’s—cold and strict guidance as a maid to prove that she is just as strong and independent as her mother, reevaluate her unrequited love life, and “fest up” her otherwise mundane city life.

As Ohana grows deeper connections with the quiet countryside land and the changing seasons, she is faced with the trials of working as a maid, as well as countless interactions with the many customers that come and go at the Kissuiso. Bonds of friendship are born, and inexpressible relationships blossom beautifully.

Much of the love and respect I have for this show lies right here with the inn’s staff. That said, it can also be the most frustrating part. The busybody maids remain my favorite: Ohana’s fresh, persevering face even if she’s not exactly helping in the best way just makes you want to shout “SHE DID NOTHING WRONG” (at least she’s always trying, unlike some of the others); Nako, the”quite literally” big sister character never fails to support Ohana in that soft and gentle way that she does; and Tomoe, the playful and typically jealous woman tends to catch gossip and spread rumors throughout the inn, adding in the comedic elements.

It’s the cooking staff that annoys me the most. No, not Renji, the stoic and buff head chef who minds to himself—my issues lie with an outspoken young man named Tohru and a girl Ohana’s age named Minko who “secretly” has the hots for him. They’re just both so rude to everyone, scolding one another whenever they can and not leaving much room for fun. I guess part of that adds to the staff’s dynamic (and conflict for Ohana), but Minko’s attitude really got on my nerves; far too distracting for what her character honestly represents. I also couldn’t stand her voice.

Lastly, I couldn’t forget the two loudmouths that pop in throughout the series: Yuina, the daughter of a rival inn’s family and Ohana’s new classmate who honestly only wishes to enjoy her youth while discovering her true passion; and Takako, the glamorous business consultant adviser for Kissuiso who always wants to revitalize the rather old-fashioned inn to suit the times. She often bumps heads with Sui, as her ideas are indeed ludicrous at times, but when it comes down to it, they both only desire what’s best for the inn and its customers.

I could go on about how genuine the personalities and relationships of each character feel, but half the appeal of Hanasaku Iroha is witnessing how they go about their days, both the ordinary ones for those slice-of-life vibes and the hectic ones to see how this seemingly disjointed team tackles wild problems head on!

One of P.A. Works’ Finest Pieces

I’m all about scenery. Whether it’s a schoolyard from heaven (or hell) or an enchanting undersea village, P.A. Works never fails to embody this ideal vision of a “gorgeous world.” The anime’s characters are all beautifully designed and fluidly animated in their own right, Ohana especially, but the colorful Kissuiso takes the cake as a visionary set piece. Perfectly blending antiquity with its polished, hand-carved wooden exterior with the luscious greens from nature, the rustic countryside inn almost feels tangible, one that you can breath fresh air easily in and instantly feel comforted by the relaxing atmosphere. I could probably lose myself in the pages of an art book if I ever got my hands on one (which I will surely try to).

The same glowing things are to be said about the charming piano and string tracks by Shiro Hamaguchi, my favorite being a little sad piece called “Remember that day with a smile like that.” For OPs and EDs, I’m not a huge fan of nano.RIPE’s lead singer’s nasally voice, but its random fifth ending “Saibou Kioku” happened to play at just the right time.

It Runs in the Family

Hanasaku Iroha enters the realm of slice-of-life with a little drama thrown in the mix. While it’s easy to label it as just that—a simply relaxing show—the series poses much more than that. From the beginning, it presents a moving story about family and adulthood, parenting and role-modeling. Like most titles with drama elements, the events of the larger present story are results of a little, once-close-knit group from the past. 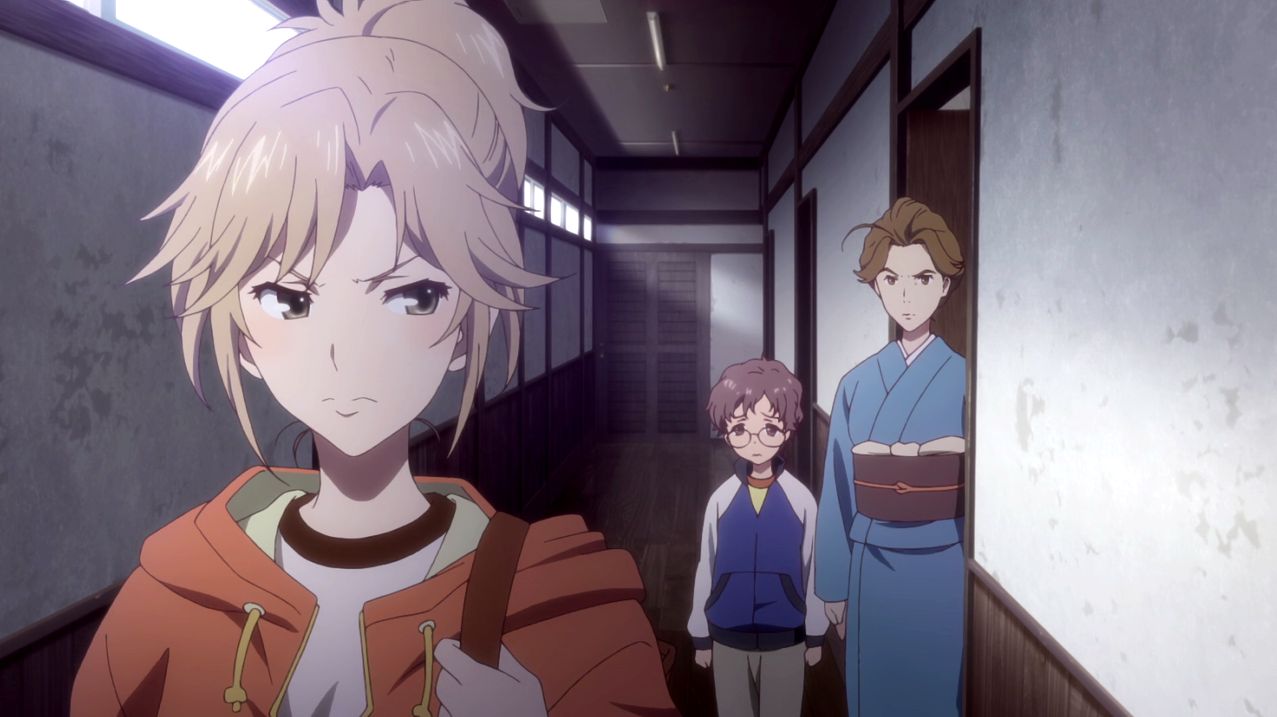 This group now makes up the adults in Ohana’s life: her stern grandma, Sui, her defiant mom, Satsuki, and her scatterbrain uncle (Satsuki’s brother), Enishi. When these parental figures were supposed to guide Ohana as a child, Satsuki often left Ohana to do all of the chores and “take care of herself”—a mantra that she still employs—choosing to put her efforts into her work as a pro writer instead of parenthood. Satsuki gave up her entitlement as the inn’s next manager, and as a result Sui stayed behind at the inn, Enishi working for her, and that was that.

Ohana spent her whole life cleaning up after her own mother.

As depressing as that sounds, the story’s realism is probably the best thing that it has going for it. It’s a show that doesn’t want to boast, but simply leave itself out there by remarking, “This actually happens in real life.” By intertwining the lives and efforts of the inn’s staff, using the Kissuiso itself as the anchor, everyone comes to understand the tension between Satsuki and her mother, why Ohana’s personality is so brazen and spirited, why Enishi is so desperate to win his mother’s approval over his big sister, and why their boss Sui acts like such a secluded hag. It all comes down to family in the end, or rather the lack of a strong one to bind them together.

I think we can all relate to this.

Genes have the power to shape a family, but only you can decide what path it takes. As people, we make mistakes—for some of us, a lot of them—and maybe you got that from someone (or you’ll pass it on). But regardless, if we spent as much time thinking about the ones we are supposed to love as we did ourselves, I think we’d all be better off.

Ohana put herself in her mother’s shoes when she reconnected with the source that threw her mom off to begin with, and her entire world changed for the better as a result. She realized that as different as she liked to think they were, they both made the same mistakes as young girls. Knowing this, she vowed to be like her grandma one day, hopefully ending the cycle of familial neglect.

And this made momma very proud of her little girl. 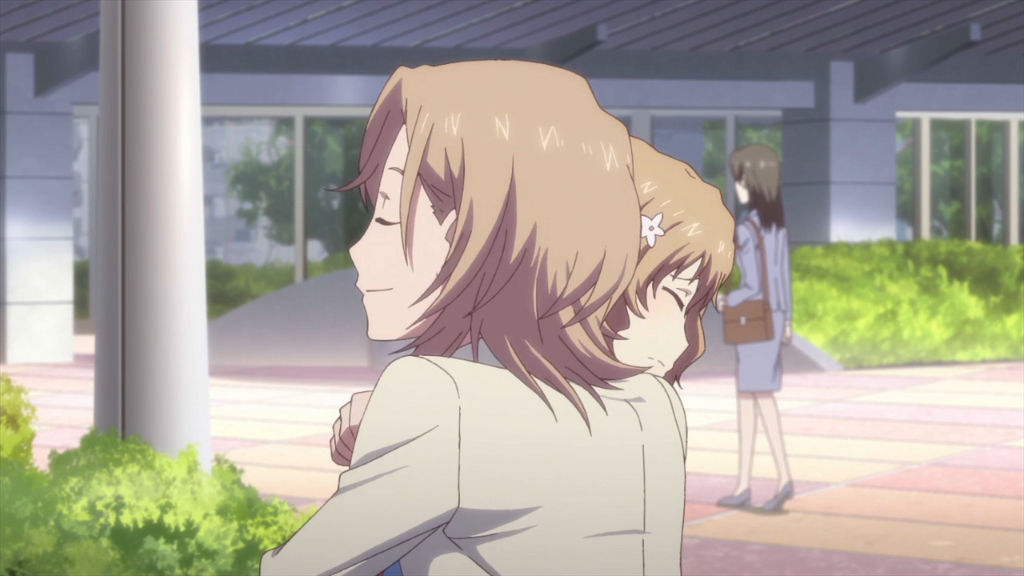 Hard Work Really Does Pay Off

Hanasaku Iroha walks us through the struggles of the worker class for a girl living in a somewhat broken home. As Ohana comes to find beauty and grace in hard work, dignity, and servitude, we can’t help but feel inspired by her bold newfound identity. Most important of all, we’re told an endearing story about being the best that only you can be, and that even in this self-centered world that is so consumed by “give and take,” there exists wonderful places like the Kissuiso, safe havens that offer both a relaxing time to heal old wounds and a staff that only wishes to work hard to serve YOU. And that, well, that’s really special.

“You may come to a standstill or get irritated because things don’t work out the way you want them to, but what you gain from hard work will never betray you.” – Tohru Miyagishi

So there you have it, the very gentle and sweet Hanasaku Iroha. By the end of it, you just want to smile and cry at the same time. For those wondering, the film takes place before the finale, and acts more like three episodes linked together rather than a standalone film. Still wonderful stuff—so wonderful that I present it with the certified “Caffe Mocha” rating, one for the menu and it’s all on me (actually it’s on Crunchyroll for FREE)! You HAVE to let me know what you thought about my review over this quaint little gem if you’ve seen it, as it’s a quiet show that doesn’t get much buzz anymore. I found this to be the perfect show for this month’s OWLS theme since “Ohana” does mean “family” in Hawaiian, after all!

This concludes my August 4th entry in the OWLS “Bloodlines” blog tour. Since I was first again this month, I’ll give you the weekend before handing it off to my buddy Matt (Matt-in-the-Hat) with Final Fantasy VII: Advent Children (I REMEMBER THIS FILM!) on Monday, August 7th! Thank you so much for reading, and until next time, this has been