A brief spoiler-free review of the 10-episode winter 2018 anime “Devilman: Crybaby,” produced by studio Science SARU (and Netflix), directed by Masaaki Yuasa, written by Ichiro Okouchi, and based on the manga by Go Nagai. 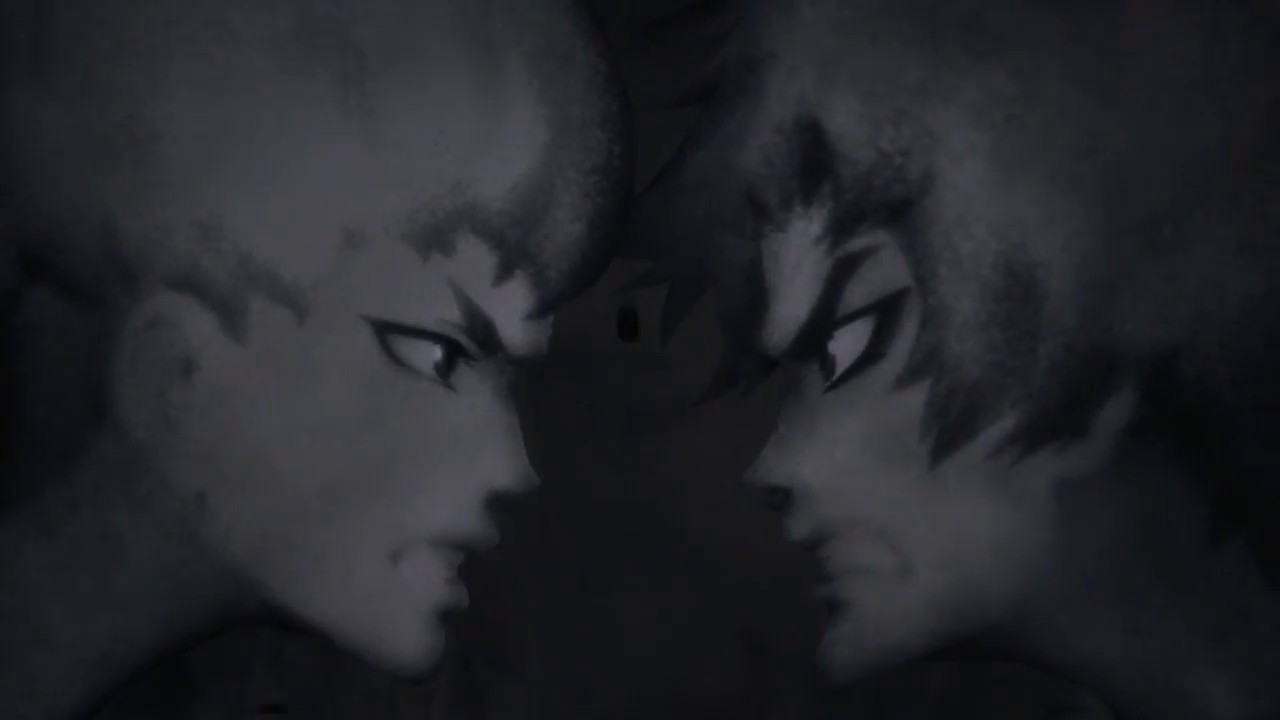 A Wild Night Out

Akira Fudo is a crybaby. He’s always been, and he always will be. Akira’s high school career takes a trip to the wild side when his best friend from many years ago, Ryou Asuka, suddenly reenters Akira’s life. This surprise reunion excites Akira, but unfortunately, Ryou isn’t back so the two can play on the playground again. Instead, he informs Akira that hiding amongst the shadows of their picture-perfect reality are monstrous demons, and that soon the demons will revive to reclaim the world from the humans. To combat their brute, supernatural strength, Ryou has a plan: to fuse a human with a demon.

Those who conquer their “literal” innermost demons can master the power over them. And thus, after violently loosing his innocence at an infamous nightclub rave suspiciously titled the “Sabbath,” Akira becomes Devilman, a being with the power of a demon and the heart of a human. Finally seeing the darkness that humans have hid for so long, Akira feels blessed to now be able to save others, but more so cursed because he will likely never be understood ever again. But he has Ryou, and for Akira, that’s enough to make the pain worth suffering. Or so he hopes.

A Tragedy Fit for Our Time

By mere story alone, Crybaby is a masterpiece. Having heard the crazy amounts of praise that have been circulating already for a couple weeks now, this should be no surprise. It starts at zero, at everyday life for a young boy and his relay mates, and quickly escalates into a bloody, traumatic, world-ending experience for both the characters and the viewers. As a standalone piece of fiction, it’s a modern tragedy made fit for the decade—complete with its OWN FREAKIN’ CHORUS in the form of some swaggy J-rappers—a series that is and should be celebrated for the, might I say, “daredevil” tale it sets out to tell. So many countless symbolic, societal, and sexual metaphors make the story incredibly compelling, and the religious undertones work wonders in creating this gritty, larger-than-life epic. 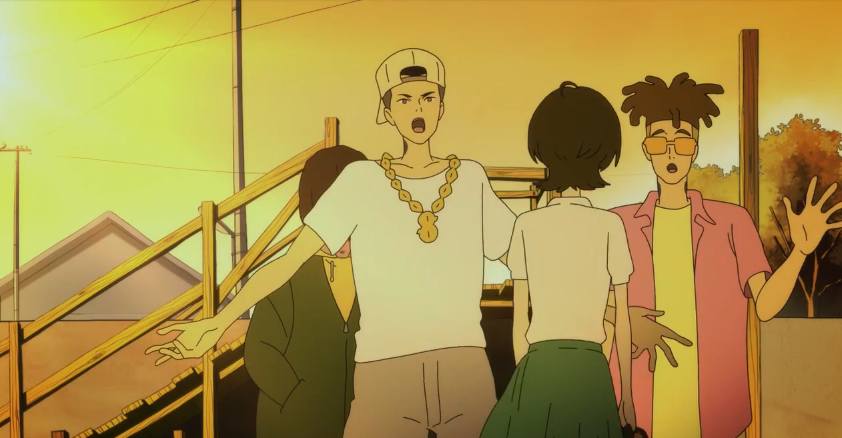 And the best part of all is that the series isn’t just “depressing” to be called tragic—rather, it lives up to the classical standards of Greek tragedy by existing to A) prove the faults in our own lives, B) present a heroic attempt at handling them, and C) leave us with a cathartic end to cleanse the insanity that just befell the cast. It’s a masterful formula from the humble beginning through to its apocalyptic end, and as the media outlet Polygon states, the finale is “beautiful, devastating perfection.”

The only [minor] problem with a story of this magnitude is that Crybaby has very little time to tell it: only ten episodes, to be exact. While the pacing for the first several episodes feels spot-on, there is a significant push, particularly in the last two episodes, that does seem rather hectic. To be fair, however, the gruesome content and big reveals in episodes nine and ten ARE time sensitive; dragging these plot twists and dramatic developments out beyond an episode’s time would ruin their effects. Besides, perhaps that rushed sense of mayhem is what contributes to the explosive, catastrophic nature of the Devilman franchise. 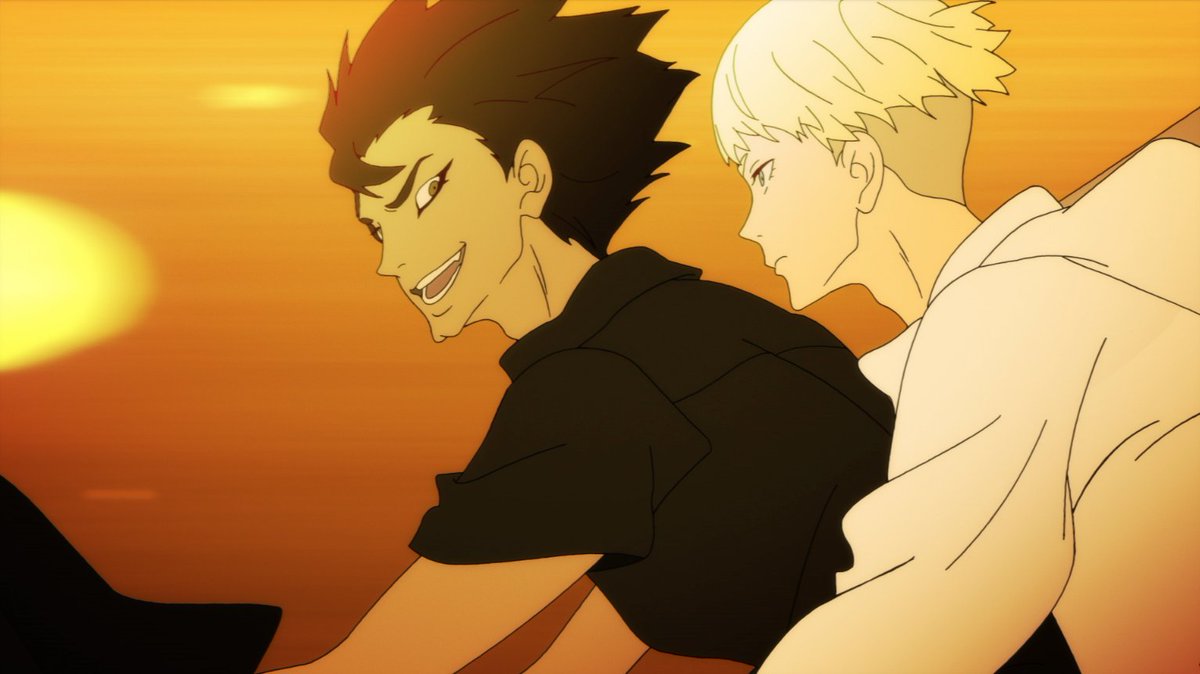 As far as characters are concerned, I won’t go into much detail simply because half of the thrill stems from witnessing just who some of these characters really are, and exactly what they will eventually become as the plot edges further and further on borderline insanity. Akira Fudo’s deal with the devil surprises all those around him, sure, but his grotesque change conjures up more mental conflict than physical ailment. He’s honestly a gift to mankind who doesn’t belong in this cruel, cruel world, and as he teeters on the edge of his own humanity—of a dying hope vs. an unflagging despair—he realizes that, at the darkest roots of their heart, people can be even more vile, disgusting, and sinful than any demon to roam the planet. Compared to his cute, scrawny self at the series’s beginning, the superior antihero Devilman that Akira becomes is stronger in nearly every way—all except for that tender, still-broken human heart of his. 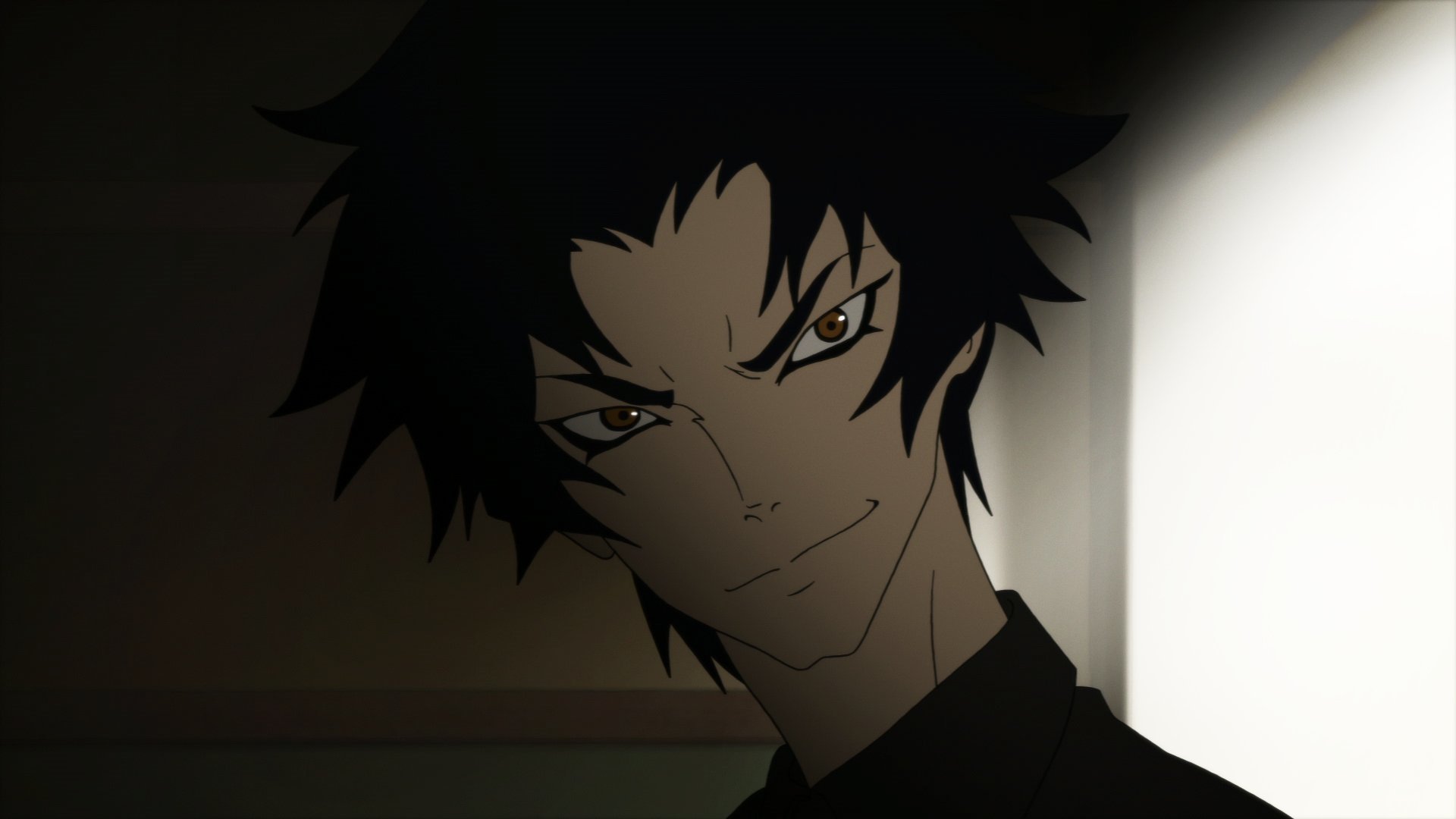 Ryou’s fluffy, blonde-bowled, bishounen design may seem inviting, but don’t let that charismatic baby face fool you: underneath that puffy white coat is a deadly machine gun and cunning wit, both which are fully loaded at all times. From that first smooth car ride Ryou and Akira share together, you already get the feeling that Ryou is scheming something (as if the glaring camcorder he films on 24/7 wasn’t evidence enough). Still, he is doomed to a fate just as tragic as Akira’s—if not more so. Ryou is one baaaaaad boi, but I loved his development way too much to hate him.

I’m not kidding. Devilman: Crybaby has some of the downright UGLIEST animated sequences I’ve ever seen. From the hilarious attempt at depicting just how “speedy” devilmen can run to the blobby, disproportionate, and completely uncensored sex scenes, by visual standards, Crybaby is not a pretty-looking show.

But does an anime need to be “pretty” to have it’s own beauty? Absolutely not. Or, well, at least Crybaby says so.

You see, the series has this certain edge to it, a certain grit that is hard to explain. The animation outlines, for instance, are cleanly drawn and look quite fresh (faces in particular). But then you have the action scenes, which are just SO freakin’ bizarre to watch. Like, I couldn’t even tell you if some scenes were, in fact, “poorly animated” because the ENTIRE SERIES has that same exact look. The lack of detail in light-hearted moments (like Akira’s high school, or his quiet past) compared to the almost sickening actions of other demons and humans alike gave form to a style that I can’t quite put my finger on. It’s as if the animation is “untamed,” or “knows no bounds”—yet it all flows well as its own style within the context of the story. Not to mention that the compact 10-episode run and smart directing allow for each and every shot to carry some sort of secondary meaning, however unnecessarily violent or sexual or BOTH the risqué presentation seems to people.

I, for one, felt that all of the overly grotesque scenes brutally tread some sacred ground of entertainment that hasn’t been touched in decades with a bloody tank. It’s a unique visual style that I frankly haven’t seen anywhere else, and it was depicted brilliantly.

But I Know I Loved the OST!

As I am currently writing this, the Devilman: Crybaby soundtrack is humming in the background for inspiration. What about it is so special? Well, it has great balance; it’s epic (“D.V.M.N.” – Main theme), startling (“Miki The Witch”), playful (“Wishy Washy”), intense (“Anxiety”), entrancing (“Beautiful Silene”), heart-pounding (“Smells Blood”), uplifting (“Prayer”), cathartic (“Pathetique”), and so much more. Composer Kensuke Ushio (Ping Pong The Animation, Space Dandy, A Silent Voice) knows how to write excellent orchestral/synth pieces, I tell ya!

There’s a little tune that is repeated throughout the entire soundtrack that can be any of the emotions listed above, so long is the right instrumentals is paired with the mood. My personal favorite IS a reprise of this gorgeous melody line, and it just so happens to be the very last song played in the series, the End of Devilman: Crybaby, so-to-speak. It’s appropriately titled “Crybaby,” and if it doesn’t move your heart to the point of tears, forcing you to recall Akira, Ryou, Miki, and Miko’s shared heartache and tragedy, then I’m not sure what will.

Oh yeah, there’s also a remake of the original Devilman opening included with the soundtrack, which, if you SOMEHOW haven’t heard yet, is SUCH A BOP HOLY SHIT. I STILL listen to it religiously.

The Destructive Darkness Within Us All

By Devilman:Crybaby‘s end, there is arguably no sadness left for the characters, no more tears to cry. It should feel complicated, as the amount of despair is simply undefinable. But instead, all you can wonder is how things got to this point, and how what you witnessed was, in fact, the end brought upon by humanity. The ending is completely unfair, yet it balances the scales with terrifying perfection. You could feel sad, or depressed, or enraged at how BLIND people can be, but instead, all of it feels pointless, as if nihilism just inducted you to suddenly became one of its patron saints.

The ending of Devilman: Crybaby is indeed a very empty one. And that very catharsis, that feeling of emptiness and pointlessness, is what lies at the heart of a well-written tragedy.

As happy and sad memories alike resurface for these two boys, Akira and Ryou come to realize that, without one another, life before friendship was boring and often cruel. It was lonely, and it was meaningless. But through the ugly tears they cry, the bleeding hearts they endure, and the tragic fates that they cease fighting against, the two learn to finally accept love, for it is really love, not hate, which makes the world go round. And so to tear up the ENTIRE world just to tell this seemingly small message—Yes, such is what completes the horrifically tragic Devilman: Crybaby as a modern masterpiece.

Devilman: Crybaby is raw, brutal, yet oddly honest about its understanding of cause and effect and the power of compassion. It doesn’t forget to throw in a few laughs, though. As the community has already remarked, this show is ABSOLUTELY NOT for the faint of heart. This series showcases the worst aspects of humanity—of vengeance, overindulgence, paranoia, and immorality—and for many, that can be hard to watch (plus, it’s like, mega gory and sexual). You’ll be asking yourself “WTF is this even real?” many times, and you’ll feel absolutely disgusted with humanity. But have faith that there is a reason for the madness. I walked into this action series not knowing a lick about the Devilman franchise (aside from the old dub clips, heh heh) and obviously enjoyed the HELL out of it.

If such disturbing material doesn’t bother you, then I’m sure you’ll also enjoy this wild ride through the bloody and the occult, as there are a fair amount of life lessons to be learned. I’m giving Devilman: Crybaby the honorary “Caffe Mocha” title because of its unexpectedly high emotional impact (you gotta love the indirect End of Eva references, too)! There’s a particular scene in I think episode 8 or 9 that absolutely wrecked me, and the powerful ending . . . wow . . . I’m sure I won’t be forgetting about that for a long time. If you are thinking about watching this anime, or have already seen it, you HAVE to let me know what you thought about it! I’m dying to dig the series back up, even though much of the hype has died down, haha! Let me know if I did a decent job by hitting the like button (I appreciate it!), and until next time, this has been