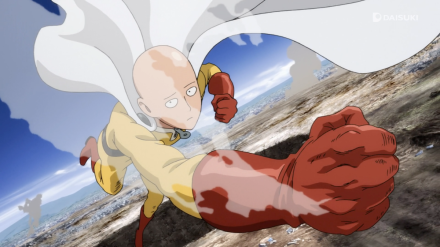 A brief review of the 12-episode fall 2015 anime “One Punch Man,” produced by Madhouse, based on the web manga by ONE (story) and Yusuke Murata (manga art). 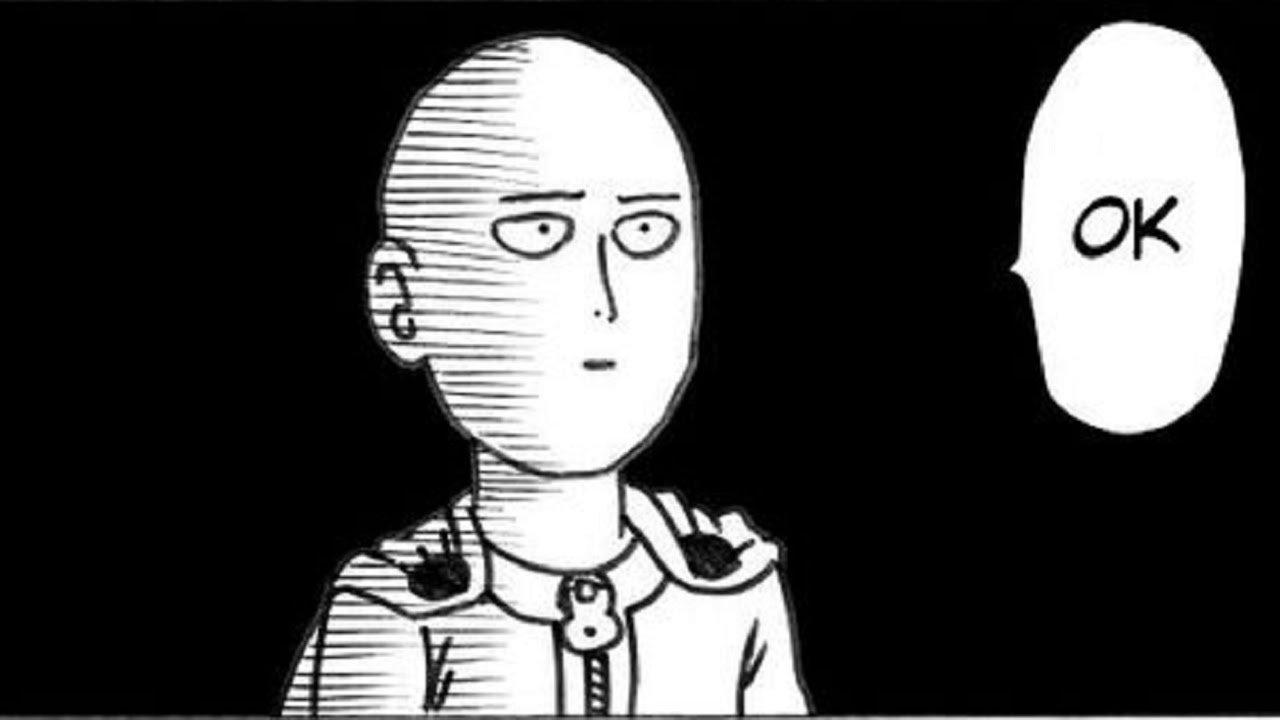 Travel back one season from ERASED and you have the anime that etched 2015 in history: One Punch Man. Its grossly over-popular yet dorky concept captivated web manga fans, and when an anime adaptation by THE Madhouse was announced people went hysterical; cosplay, fan art, and “OK.” memes circulated like no other. But what gives OPM a fiery kick like no other, and why do fans gloriously rave about this bald athlete?

In a world under siege by gigantically wacky monsters and bizarre extraterrestrials, Saitama wanted to be a hero. So, he trained ruthlessly for three years, got abs, but lost his hair. Now he has arguably become the world’s strongest hero. Unequivocal strength comes with a price, however, as now all it takes is a single punch—ONE PUNCH—to knock is opponent into next Tuesday. What was thought to be a thrilling and rewarding hobby became tedious and unsatisfactory. Because he defeats his foes in an unbelievably swift manner, people and the media are also unable to credit him properly.

To keep the story fresh, life must change for Saitama. And it does. A cold, brutal, 19-year-old cyborg by the name of Genos stumbles upon the one-hit-wonder’s performance, and urges Saitama to take him as his disciple, admitting he has much to learn from him. Genos then leads his master to the Hero Association, where the two can become certified heroes and *fingers crossed* be officially recognized (and rewarded) for their work saving City Z. As anticipation reignites in odd Saitama’s eyes, he clings to the hope that tougher enemies will head his way, and that one day soon, the people might actually turn to him for help in this chaotic world. 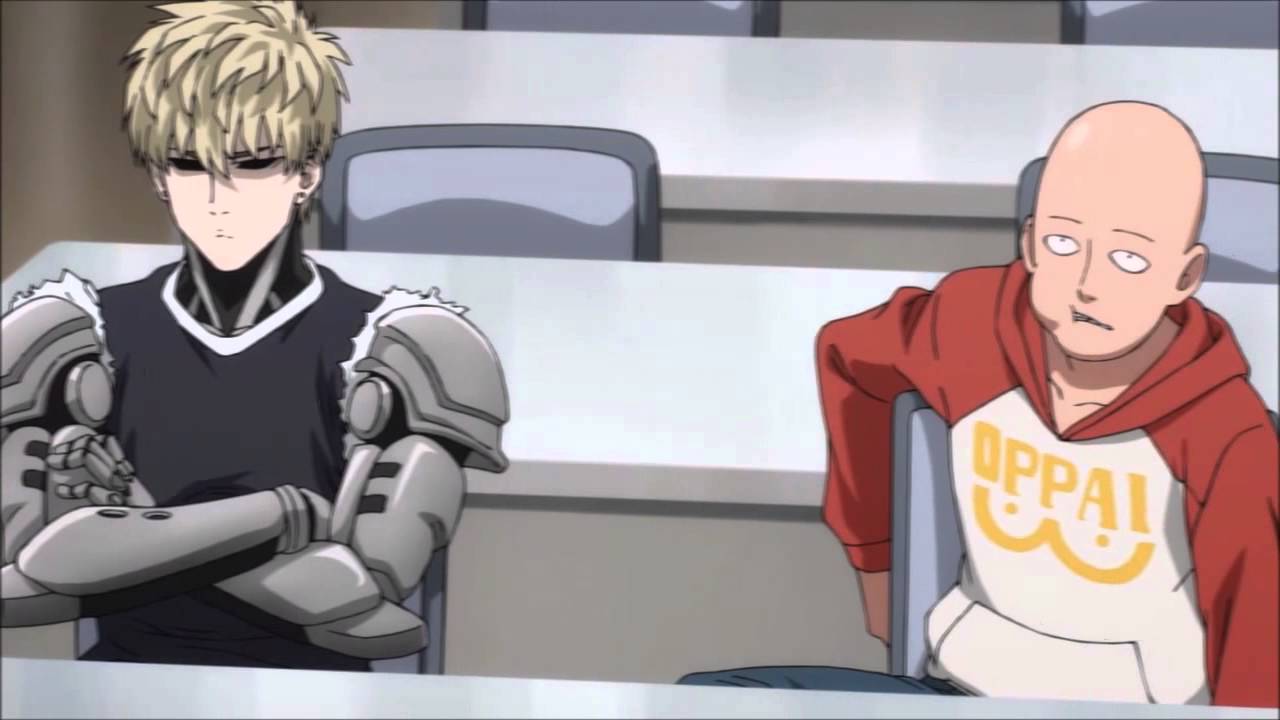 One Punch Man is simple; a tough guy follows his all-powerful master in hopes that the two find excitement in experience, challenge, and fame. While most of the intent is on the explosive battles, much of what people took away from this experience was the comedy, in that it doesn’t try too hard to make us laugh because it’s inherently goofy. The whole scenario of a bald, self-proclaimed hero in a mustard-colored onesie running through the streets yet managing to obliterate any target in one punch is satire in itself. Saitama is an unapproachable fool who defies the typical superhero because he’s an egg-head who exercised a sh*t ton—not receiving any supernatural/monetary help as we know it—to become strong. Since battles are nothing for him, where we see Saitama struggle is against the public eye and the Hero Association’s ranking system itself. 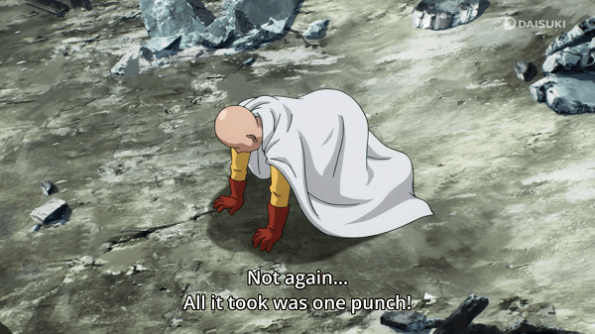 But with the crudely drawn monsters and frankly disgusting defeats, I was turned off by the extreme ends of the repetitive earlier fights. I admit, I thought the anime would run out of steam quite early on, making it just another shounen series out there (but epic-er). Then episode 5 came around—the bout between Genos and Saitama—and I fully realized that this was going to be a good show.

I should applaud Makoto Furukawa’s performance as Saitama because holy crud, how can anyone sound so bland and ordinary yet make me sh*t bricks whenever he opens his dumb mouth?? He really did capture our Egg-head’s nonchalant dialogue, yet appropriately ramped it up for intense battles. I ended up enjoying Saitama as a character much more than I thought I did, for even though he’s clearly the world’s strongest man, he grows as a human in seeking attention and ‘raise’ Genos at the same time. Like the seemingly basic plot, much more development boiled within each emotional scene.

Genos is your typical knight in shining armor (literally, hah!), needing little introduction to sway the crowd in his favor. He’s a straight-up badass cyborg, after all, though he too knows his flaws and overly criticizes himself for the few things he couldn’t do rather than celebrating his accomplishments—there’s always room for improvement. I sympathize with Tin-can on this one. Good thing Genos has a buddy to support him. 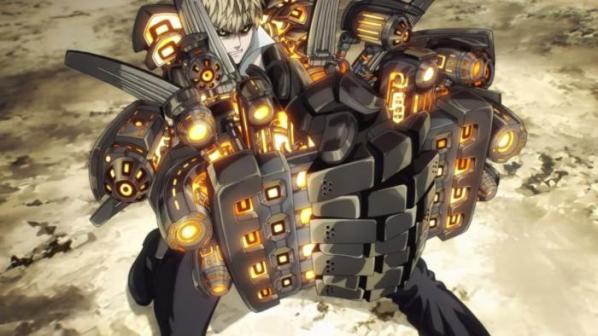 We also get to see the variety of heroes, low and high rankings, which are part of the Hero Association. Most A Class top dogs tend to do it for the fame and luxury life, while the C Class underdogs usually put the good of the cause before themselves. Such is the instance of MUMEN RIDER, a “catch-my-flying-balloon” hero who cycles all across the atomically-wrecked City Z to fight evil (even though he’s typically too little, too late). More than that, he represents the “man at the bottom of the totem pole,” and though his arms are weak, his heart burns passionately like a fool trying to stop the rain by yelling at it.

Madhouse. Ah, Madhouse. I’ve seen very little by them, and honestly, the first couple episodes made me cringe more than anything . . . until that episode 5, man, I’m telling you that’s the crazy action I was anticipating from the beginning. Each match just tries to absurdly 1-Up the one that came before it. After that, I was pretty much glued to the screen, appreciating the contrast between Genos and Saitama’s menial routine (hilarious faces and gestures, oh god) and the ridiculously high-octane fight sequences.

A musical score rides side-by-side with the energetic animation. Makoto Miyazaki combines fierce electric guitar rifts with overpowering strings and techno beats to form the definition of “action film music.” Personal favorites include the eerie “Kowa,” the epic “Crisis,” and of course, the “Theme of ONE PUNCH MAN” and its many acoustic and piano renditions. It’s enough to make you want to jump out of your bed each morning, shout a bloodcurdling cry, then proceed with air punches and a billion push-ups.

Where would I be without mentioning the show’s anthem OP “THE HERO!!” by JAM Project? While it alone contains enough awesomeness to serve as a substitute for your morning coffee, I also speak for the ending, “Hoshi yori Saki ni Mitsukete Ageru” by Hiroko Moriguchi. It was just such a nice balance between “GOOD FREAKIN’ MORNING, NOW GO GET ‘EM” and “Welcome back ~ it’s been a long day. Rest.”

(Why not Genos? Because that cyborg fits the formula all too well. With One Punch Man also being an adaption of a longer-running series, we do not know how the overarching story ends. I have taken those bullets out to accommodate this cut-short adaptation.)

Notice the lack of similarities between typical heroes? Unlike ERASED’s Satoru Fujinuma, who received supernatural help, fought on to improve himself and save others, and even challenged fate, Saitama is a laughing stock, and his anime, the “proclaimed satire of hero genre” is more just for action and comedy than anything. HOWEVER, Saitama still manages to mangle himself into the hero mold—especially by the end—and I only wish we got more. I’m sure much deeper and emotional struggles await ALL of the cast, but based on these 12 episodes, you’ll walk away giggling rather than contemplating heroism and life as we know it, that blah-blah stuff. We like Saitama because he’s different—because he’s a dork.

Watch One Punch Man for the grotesque, energetic, explosive, out-of-this-world action scenes and the natural hilarity and fun that is Saitama. Should neither of those things intrigue you, then it wouldn’t be a crime to skip it (Genos might say otherwise). I had an epic time with the show, and I’ll leave you with an inspiring quote to contrast the nonsense the anime is more infamously known for. One Punch Man is A-“OK.”

“The true power of us human beings is that we can change ourselves on our own.” – Saitama

ZOOM-BANG-POW! These are my thoughts on 9/10 “Caffé Mocha” One Punch Man. As you can tell, I was pretty darn satisfied with what I signed up for. Most people were. Did OPM satisfy your craving for brutal bashing, or did the quirky facial expressions fuel your smiles? You really ought to let me know! Also, do you have any Saitama or Genos-like figures in your life? I’ve known this guy who’s always trying to do the right thing, but his clunky demeanor and unsuspected heroic deeds hardly ever get credited. Haha, the whole situation just makes me laugh, but should I? ‘Till next time everyone,

This is why people are awesome. See? I’m not crazy. He does look like an egg.