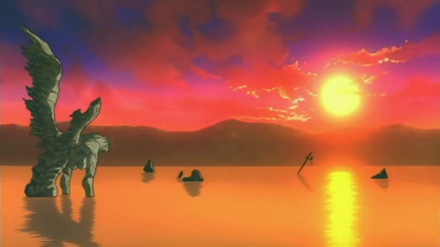 A review of the spring 1997 anime movie “Neon Genesis Evangelion: Death & Rebirth,” produced by Gainax and Production I.G, based on the original story and series by Hideaki Anno.

I knew I would be disappointed with this film just by hearing all of the negative feedback it received. Now, would I have sent Hideaki Anno death threats? Lord, no, but I can understand why Death & Rebirth, despite its critically-acclaimed impact on the series, is often – and should be – skipped. To those who haven’t seen it, you’re probably thinking, “Why pass up more information to a series that lacks much explanation as is?” That’s because Death & Rebirth offers absolutely nothing new. Zilch, save for interspersed musical quartet scenes, a one-minute firsthand account of the Katsuragi Mission, and pretty half-way credits moment.

The following song just reminds me of all of the sh*t these poor kids went through. It’s sad, really:

The “movie” is actually two episodes: one 70-ish minutes and the other 30-ish minutes. Part one, Death, is a shotty recap of the first 26 episodes of the original Neon Genesis Evangelion.

Instead of taking the typical approach of sequential order used by most recap episodes, Death jumbles all of the scenes up and attempts to sort them out by characters. That’d be like saying, here’s 20 minutes of Asuka, followed by 10 minutes of Rei, then 20 minutes of Misato, etc. It fails incredibly, however, due to having inconsistent rhythm, nonsensical ordering, and honestly, all of the “meh” scenes from the original series. While I understand going for a psychological approach to sort of line everyone’s emotional patterns, flaws, and triumphs up, that doesn’t mean you cut out all of the quality combat scenes that made Evangelion a fan-favorite.

I always thought this was going to be Death & Rebirth. WHAT IS THIS ARTWORK FROM?? That Angel looks B.A.

By the way, over 90% of the film is REUSED ANIMATON from the series. Wait, what?? The only new thing Death brings to the table is those lackluster quartet scenes mentioned above. Kaworu on first violin, Asuka on second, Rei on viola, and Shinji behind the cello. Even though we don’t get to see them play (cue typical Evangelion black screen and text), the film merely putting classics like the “Canon in D” or “Air” in the background, the assigning of their instruments speaks for itself. Don’t get it? Here:

Shinji Ikari, cello. First to arrive, set up, tune, and practice Bach’s “Cello Suite #1,” a soothing piece which weaves notes on all four strings together; arpeggio (yes I’ve played it, often overhead in media, but whatever). The cello is the closest string instrument to the human voice. Specifically, some say it was modeled after a woman’s — a mother’s voice. Shinji pilots Unit-01, which we all know by now contains the essence of his lost mother. The cello is a mirror to Shinji’s desire to be with his mother again. Also, it’s the only instrument in a traditional quartet that you can hide your chest behind.

Asuka Langley Soryu, second violin. Second to arrive, cheerfully giving Shinji a “good morning call,” unpack, tune, and burst out the first few bars of Bach’s “Gavotte in Rondo,” a busty and springy song full of independence and repeated melody. Want to know why they’re called “second violins?” Simple. It’s because they’re not first; that is what Asuka has been struggling with since the beginning – Always trampling over the competition with a fierce façade, yet falling so short in the last second.

Rei Ayanami, viola. Third to arrive, set up, tune, and wait patiently to start. I can’t remember what she practices (if she even did so), but she plays the viola, an instrument that has been joked about for centuries because it’s nearly impossible to hear. It’s shaped like the violin – an imitation, a clone, much like Rei herself – but it harbors the same strings as the cello. Remember that warm and fuzzy mother feeling I was talking about? Yeah. Starting to see the connection?

Kaworu Nagisa, first violin. Fourth and last to arrive, set up, tune, and become ready to play. I also can’t recall what he practiced, but the instrument speaks for itself. It’s the first violin: It guides the group, provides cues, gets all of the high licks, and impresses us most upon first glance. Kaworu was only around for an episode or two toward the very end, yet his impression not only on Shinji but the audience as well enraptured viewers. SPOILER: Kaworu is not only the last to show up in the film and to quartet practice, but is also the last angel. He’ll literally fly higher than everyone else, whether that’s over the planet or in the music. It is through his death (his final cue) that the show can ascend into its final stage.

Then there’s a 5-minute intermission which plays “A Cruel Angel’s Thesis” on acoustic guitar and another track from the original series . . . Yep, a real freakin’ intermission. That sh*t just made me laugh.

Rebirth, the second half (last third), is actually the first half of the film The End of Evangelion. As such, you should skip this copout and head straight on over to that masterpiece following your Evangelion experience!!

Supposedly, the animation and sound quality in Death & Rebirth is a huge improvement over the original series. I neither saw nor heard a difference, SOOOO, for those interested in my thoughts in those areas, please check out my review of the original series!

I get what Death & Rebirth was supposed to be: a grand compilation of the psychological sides of the main characters meant to “butter you up” for the true end. But it FAILS MISERABLY, and as such I only recommend it to EXTREME fans of the franchise. The content was great, but its presentation just doesn’t do the original series a bit of justice. The playing of Pachelbel’s “Canon in D” by our favorite quartet of psychologically-scarred NERV-lings was a nice end to Death, but since they aren’t actually animated performing (and it’s a crappy compilation), I’m not even going to personally rate it. Instead, I’ll be leaving Neon Genesis Evangelion: Death & Rebirth in the “Breads” section of the café NOT because it’s necessarily bad, just disposable for non-fans. Did I like it?

Let’s just say that in my case, more Eva is a good thing. A wonderful thing.

As always, I hope you found my thoughts interesting! Until the next part of Eva-Week, this has been