Spring is my favorite season, if only for the rain.

Two years ago I came across a YouTube VEVO music video for “Arashi No Atode” by Galileo Galilei. The song was stuck in my head for weeks after, and I remember being spellbound by the breathtaking visuals of this little video. When I found out that it was made of clips from an actual anime short film, I freaked. After doing some research, I found that this anime, Typhoon Noruda, was not the most “beloved” film by most fans (a 6.3 on MAL, I mean, c’mon people, it’s not that bad). But I wanted to see it anyway.

A year later, I got that chance, when Sentai Filmworks license rescued the title in 2018. For some reason, I still held these feelings that it’d be a “magical experience” if I were to watch it on a rainy day, even if just an average-rated film. So, in favor of milking the most aesthetic out of this $8 Blu-ray, “Save it for a rainy day” was exactly what I told myself.

Another year passed. The stormy morning that I was desiring seemed like it’d never come. There were opportunities, but none where I felt I could fully dedicate myself mentally and physically to this highly anticipated effort. Winter, spring, and now it was summer 2019. Late summer, the beginning of a new fall, and the end of my chances, I knew.

Until today, September 9th, a Monday morning before classes. It finally rained. And it poured, too. I tossed my book bag aside, having woken up early to relax before classes, and immediately plucked the Blu-ray off my growing to-watch stack and plugged in the disc.

And there I sat, for 26 unfiltered minutes, soaking in the compressed audio of a typhoon on screen, and feeling the hard rain and thunder pounding against the wall I was propped against. It was such a spontaneous decision to watch it when I did, but I have no regrets whatsoever with how things played out. I felt alive, as if I were truly living right then and there, in that storm of emotions.

For that brief half hour, I was caught in the wind’s current, and helpless to the awe of the storm both on screen and right above my head. So much time and anticipation had coalesced into this single transient moment, and before I could comprehend that it had begun, it was over, just like that.

I spent the rest of the morning letting the rain brush against my jacket and roll down my sleeves as I walked to my class. Rolling into my first morning class right on time, I didn’t mind that I was a wet mess; I was literally soaked in aesthetic, a feeling that I had been waiting years for. No one was about to take this self-care moment from me.

Today I watched a film I’ve waited over 2 years for. And sometime this very week, I’m actually going to be publishing the review for it. That’s crazy to me, a true full-circle experience. Now, I can finally put the Blu-ray back on the shelf, and merely hope for another rain to bring another unforgettable experience—and a new story to tell all of you. 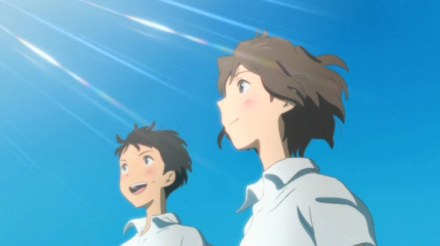 Oh the things I do for ambiance! While I enjoyed the aesthetic experience and cathartic feeling of watching Typhoon Noruda more than the actual film itself, I do still have some thoughts on it. Mostly good ones, too, so please look forward to my full review of the film here in a couple days.

Have you ever held off on a book, a movie, or a TV series just because you thought you might enjoy it more under a set of specific conditions? What about even something as trivial as a special piece of candy you received as a gift, or perhaps that brand new jacket with the bright colors and big hood? Please, share your stories in the comments! If you’re currently saving an anime for a “rainy day,” I especially want to know what title that is and why. Thanks for joining me on this little story time, and hopefully I’ll see you all again for the review!