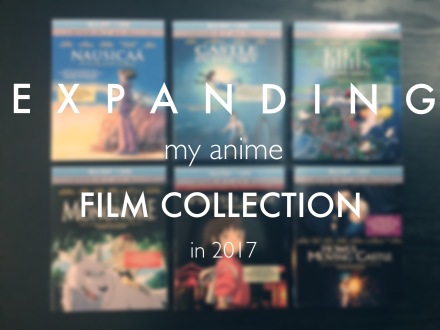 Hey everyone, welcome to (a very belated) day 11 of Blogmas (whoops)!

We’re nearing the final days, but there are still a couple of BIG things that made my 2017 a landmark year for exploration; one is on the anime side, the other on the blogging side. Today, we’ll briefly talk about anime movies, and how I went from disliking their short length and randomness to simply being enamored by their ability to tell a “complete,” charming story full of virtues. And yes, my film collection did exponentially EXPLODE this year as a result!

(This is in regards to films that don’t belong to existing franchises. Ex. No titles labeled “The Movie”)

Like I was saying, I used to not be big on anime movies. Sure, there’s those fave Studio Ghibli films that everyone grows up with (special shoutout to Kiki and Laputa), but otherwise, you wouldn’t find me browsing for some little indie film or original short. Looking back on 2017 now, I think it was the tail end of 2016 where I caught the film fever.

I took a painting class during my last semester in high school. With little imagination (or teaching for that matter) to go off of, I turned to anime as inspiration, like we all do. I had seen Makoto Shinkai’s The Garden of Words sometime in 2016, and I was simply blown away with what I call the “Shinkai Aesthetic.” It’s clean, chic, picturesque, semi-realistic, and most of all, has wicked good lighting. I could go on, but there’ll be a HUGE post about this guy’s art coming soon! Many of my paintings were inspired by Shinkai’s style as a result (well, that and Studio Khara’s Eva Rebuild Series). Specifically speaking, Shinkai’s iconic skies. I’ll share some of them with you guys later if you’re interested!

Anyway, I started to grow as an artist after creating these paintings, noticing the subtle (or drastic) differences in other anime directors’ styles: Hayao Miyazaki (and Studio Ghibli), Mamoru Hosoda, Satoshi Kon, the Project Itoh films, Mamoru Oshii, Yasuhiro Yoshiyura, and of course, Makoto Shinkai. Thematically, they all tackle different issues in different ways, and learning about not just how but why a director wants to send out a certain message through a particular scene became something that I could apply to my own writing, namely, my OWLS posts. As cheesy as they previously seemed, I learned to love life lessons and the things we can learn from entertainment.

During my Shinkai painting phase, I was also watching Ghost in the Shell for the first time, exploring the ENTIRE franchise from its first 1995 film to the Arise series and even Paramount’s 2017 live action. My mind kept expanding with every episode, every iconic shot, and the urge to recreate them in my drawing class just couldn’t be ignored. I was absolutely OBSESSED with cyberpunk by this point, and I thank all the directors and their unique styles for inspiring me so much!

This brings us to my collection, and my [terrible] need to buy everything that I watch. Thanks to Amazon Prime’s wicked ability, which allows me to buy a single item WITHOUT reaching a certain paywall for free shipping (cause I ain’t ever gonna pay for that, mhmm), I would literally buy every single anime film that fell below $15-ish. One. At. A. Time. Spoiler alert: that’s a lot of them. Here was my anime film collection in 2016:

Pretty basic, got classics like Paprika and Ghost in the Shell, and cool lesser-known titles like Time of EVE and The Empire of Corpses. Neat.

I went out and bought every Ghost in the Shell Blu-ray that I could (excluding Stand Alone Complex, as the reviews for the Blu-rays were horrendous). I loaded up on Shinkai, I snagged some Hosoda (well, received them as gifts, rather), I picked up modern classics like In This Corner of the World and classic-classics like Akira that arguably shaped anime as we know it! Honestly, I’m not sure why it took this long for me to get around to Akira. As for that whole gorgeous-looking set of black on the far left . . .

Thanks to GKIDS and their re-licensing and re-releasing of ALL the Studio Ghibli films, I bought all the ones that were on “sale,” and you can already bet that I’m going back for more as soon as the others lower in price. These are some high-ass quality releases, definitely much better than Disney’s [ugly] shiny gold releases. Then again, ANYTHING is better than the oooold DVDs that were first released, so I bought all the new Blu-rays to replace the ancient DVD copies we’ve had (which were re-gifted as priceless memories to my siblings for their own collections, haha)!

But yeah, there it is, the physical representation of my growing appreciation for the art of film, all in the beloved media that inspires me to create and explore—anime. Throughout the years, I’ve neglected so many astounding masterpieces and modern classics, and all because I wouldn’t have wanted their short stories to end. What can you get out of a measly 2 hours, anyway? However, through some incredible directors and artists in the anime industry, I’ve learned that the journey can still be magnificent and awe-inspiring, regardless of how long or short the story is. Now I can’t wait to see which films I watch next, and the adventures that they take me on!

How big is your personal anime film collection? Did you see any title up there that is a personal favorite of yours? What other anime movies should be in my collection? Let me know ! This post will ALSO be logged as a “Cafe Talk,” so share your thoughts to your heart’s content!

I’m on a bit of an odd schedule now thanks to the holidays, but this concludes Blogmas Day Eleven of the 12 Days of Anime. Only one left! Thanks for reading, and I’ll catch you shortly with the last post!

So does this mean my ringtone when I call someone, or is this the song that plays when someone calls me? Meh, I’ll give one of each, sound good?

*over where I’m at* “so, everything that makes me whole ima kimi ni sasageyou. I’m Yooours ~~~”

Yep, you guessed it. Guilty Crown!!! But the instrumental only!

From Guilty Crown, “My Dearest” by supercell

Alright, this is the typical song that cues when someone for whatever reason is calling me. I absolutely love the piano intro for this song, and it’s supercell, so duh, you can’t go wrong! It doesn’t blare out and scare the sh*t outta me when I’m in public and my phone rings, but it will grow louder if I don’t notice it within the first ten seconds. Also, I wouldn’t sound like some obvious die-hard anime nerd if this song slid out of my phone speakers in my opinion, so that’s always a huge plus (not that there’s anything wrong with being a fan, but like anything for me, expression is great, though the whole supermarket doesn’t need to hear my J-pop/rock preferences). All in all, it’s a pretty solid ringtone, and a fantastic song (so someone call me so I have an excuse to listen to it, please :>)

Ooh, now finding a ringtone for myself took hours of pondering, but I’ve finally settled on . . .

I’d be flattered to receive either of these as ringtones people have set on their phones for me o>.<o While the first is laid back, you know, another day warm in the local bakery, the second is adventurous and invigorating, like forest travels – but both have this same aura of home and finding a place where you belong. I think the two Ghibli movies convey these themes, too! It’s obvious that they would make nice ringtones: no annoying vocals, no absurd electric guitars, no fluffy or spunk J-pop – Both just feel natural and free, impressive yet humble, and I think if I heard either of these great songs, I’d think a bit of myself, hehe. Check out both of these movies, as you’d be doing yourself a massive favor 😀

And with that, I conclude day 18. This was a harder day to crack down on, that’s for sure, but I hope you like what I picked! I’m curious, do you have a preferred song that you would like to hear coming from another’s phone? Also, would it be anime-related music, or would you feel a bit “ashamed and embarrassed” to admit it? Let me know in the whatchamajig below. Happy Monday, till tomorrow!