For those who didn’t know, during March 13-15, I traveled to Overland Park, KS for Naka-Kon 2015. One month later, I am finally going to talk about it (whoops, gomennasai)! I had only heard rumors and watched videos about going to anime conventions – and now I was actually going to one! It felt like a crazy dream! Please enjoy my trip story ~

After purchasing passes, it was a long five-month wait of cosplay decision-making and Ebay searching, but I made out with a  Tennouzu First High School Uniform, otherwise known as Shu Ouma’s uniform from Guilty Crown. I chose Shu because to me, he is a relatable guy and one of my favorite anime characters.

Naka-Kon greeted us with rainbow hair, mobs of people, and the subtle hint of body odor, but I’ll never forget the many smiling faces. Everyone was so chill – it was awesome! I was standing in a room full of true friends, and I didn’t even have to know the names of anyone. We all loved anime and games, and that’s all that mattered.

The Sharaton Hotel Staff were also cool people. We thought our passes were day passes only, but the people at the front desk said they were for the whole weekend, and that we could stay another night if we needed to. We did. Also, they kept handing out free snacks to con-goers, and these weren’t just like “one cookie per person” scenarios – they were $1.00-sized free handouts that never ended. Like everyone else, my sister grabbed 6 packages of cookies and kept them until we were hungry mwahhahh!

My favorite event from the con was the first one we went to which, bright and early, was a Micah Solusod panel. I actually got to talk to Touma freakin’ Kamijou!! Taking questions from the few people that were there (cause it was very, very early), I bravely raised my hand and asked him “What is your favorite season in the Raildex franchise?” He not only answered [correctly] Railgun S, but he even specified his favorite scene [one of mine as well] which was the fight between Accelerator and Misaka with Touma. I’ll never forget his kind words.

Now, being the prepared person that I am, I googled what voice actors and guests would be there for signings so that I could grab my merch. Micah Solusod signed my LE A Certain Magical Index while my brother snagged the DVD case inside just so that he could have something signed, too. Nice 🙂 Micah was awesome – one of my new favorite VAs – and has encouraged me to watch the infamous Soul Eater, of which I am currently 36 episodes into. 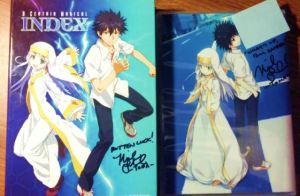 After him, I got to meet with Matthew Mercer who signed the mini-poster that came with the Fate/Zero Complete 1st Season DVD as Kiritsugu Emiya. This guy was so chill compared to Micah, who was a little antsy guy walking all around! He was super nice and talked with me for a bit. When we came back later so that my brother could have his new wall scroll signed, I asked what he would say as Levi to Eren, and he wrote it down for me. (That’s just our little secret, tho :3) 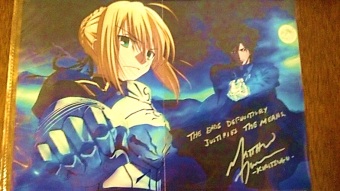 (a little subject/verb agreement problem there, but when you’re Saber’s master and an ace with the guns, I won’t complain :D)

Next was a special man. Greg Ayres voices Negi from Negima!? – the first anime I had ever seen back in 2012. His roles like Taichi Yaegashi from Kokoro Connect and Shion from No.6 are for some reason very inspirational to me. He was shocked to see my old Negima! Complete Series Collection, and we talked for a bit about the character Negi and a few of his new roles, including Makoto Isshiki from Chu-2! He’s a legend in my book, and I was most glad I could meet him! 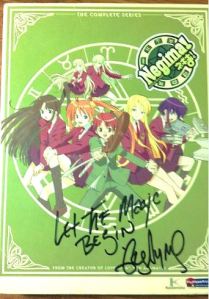 My last signing was a bit of a pain. You see, in all three lines we waited for about 30 minutes to guarantee spots in the front – which we got. The signs were misleading, and everyone from the supposed Patrick Seitz line was in the wrong place. When we moved over to the right line, we were dead last, with only a few stragglers who joined later. 2-3 hours later after bonding with everyone in my part of the line, I got to meet the John Titor from Steins;Gate, one of my all-time favorite anime. Though our chat was brief, the line of friendship was rewarding, and I actually feel like had leveled-up or something! LOL 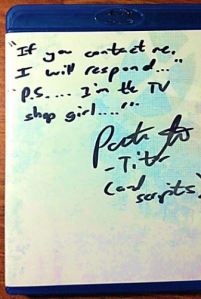 Last thing to mention was the dealer’s room and the artist alley, which was mixed together and overflowing with anime goodness! There was literally so much stuff that I wanted – that I had searched for on YouTube, Ebay and Amazon – that were now within my grasp: Nendoroids, Figmas, manga, DVDs and Blu-Rays . . . Unfortunately, I only had $70.00 saved up, which don’t get me wrong, is still a great amount of spending money, but like anything more money would have been better. Here’s what I walked away with: 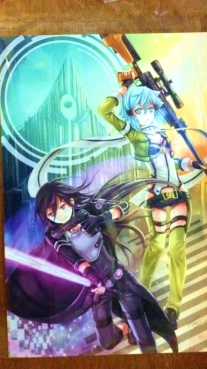 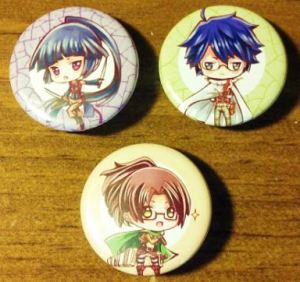 The striking Sword Art Online “Gun Gale Online” print, the beautiful ALDNOAH.ZERO print, and the cute Akatsuki, Shiroe, and Hange pins were done up by Cindy C. (cindiq.deviantart.com). I purchased these because I enjoyed the bright color palettes used, the neat backgrounds, and most of all the style the faces were drawn in. I originally only bought the Akatsuki pin, but the girl remembered me from the previous day and let me pick up the other two for a discount. Nice!

This Steins;Gate and No Game No Life “Human Potential” prints were designed by Cheng (Lily) Li (lilythescorpio.deviantart.com). I decided to buy these because I really like the soft pastel texture, the creative design, and the bright colors. They both compliment their respective show quite well. 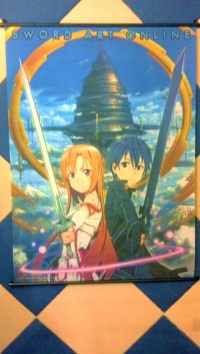 I picked up these two wall scrolls because a) I’ve always wanted one and b) I love the art. They’re just the main posters you could find through an image search, but I think the fabric material and the giant size blend better in my room. Gosh, Aincrad looks soo cool and the Madoka Magica scroll is just a spectacle to behold! They both remind me of the incredible journeys I had with each anime.

Last but certainly not least is this the famous otaku Saori “Bajeena” from Oreimo, one of my favorite characters from the series. She was only $5.00 and looks great on my anime shelf. I especially love the fact that behind her swirl glasses, you can see her blue-green eyes. Subtle yet well-worth-it effect!

Of course I took many, many, many pictures with different cosplayers who were amazing! One guy cosplaying as Shiroe from Log Horizon let me take a picture with him and let me sign a real scroll, signifying that I was a part of the “Log Horizon Guild!” Just knowing that I among the few other names were part of his guild . . . that was one of the best moments!

Going to Naka-Kon 2015 with my family not only opened me up to the anime community but also to the world. I got to briefly meet with so many interesting people – I only wish that I had never left!! But boy was I tired by the end. Comment below what your first convention experience was like, because the one word to describe mine was “unforgettable.” Thanks so much for reading and thank you to all who made Naka-Kon such a great, fun time! Until next time, this has been