Chances are that if you were linked here from another blogger pal, you might be new to this place. To those first-timers, “Hi, I’m Takuto, and welcome to my anime cafe!” As part of the OWLS blog tour’s fifth monthly topic for 2018, “Movement,” I wanted to dive deep into despair with the Danganronpa franchise, specifically its “third” anime adaptation, Danganronpa 3: The End of Hope’s Peak High School – Despair Arc. In today’s world where chaos is on the rise, spreading fear and horror through resurging domestic violence, manipulation of mass media, and most notably, school shootings, I couldn’t find a more relevant title befitting the catastrophic future we could potentially end up living ourselves—unless we stop this war on terror.

We join movements, organizations, and systems that align with our own personal values and beliefs. Sometimes we join these groups because they believe in doing good and making positive changes in society. However, these movements can turn sour when a dictator arises behind such good intentions, revealing perhaps a hidden agenda of oppression. It is in these groups that individuals start to shape their identities by either questioning their values and beliefs or conforming to the system. This month, we will be examining “real and/or fictitious” movements, organizations, or systems in anime and other pop culture mediums, and the positive and negative effects they have on individuals and society.

I’ve literally been dying to use Danganronpa in one of these OWLS posts, and seeing as how nobody ever talks about this epic third season, I think it’s about time that happened! (For the sake of a spoiler-free post, I will be omitting the series’s second half, the Future Arc. Call it saving a fantastic series for another day.) Thanks Lyn and Auri for the prompt! A brief discussion on the 11-episode summer 2016 anime “Danganronpa 3: The End of Hope’s Peak High School – Despair Arc,” followed by its 1-episode “Hope” finale, animated by Lerche, directed by Motoo Fukuoka and Seiji Kishi, and based on the original story by Kazutaka Kodaka.

AND YES, I HAVE DONE THE IMPOSSIBLE BY MAKING A SPOILER-FREE DANGANRONPA POST, SO ENJOY~!

Beginning of the End – Despair Arc

The Mastermind of despair had already destroyed the world come the end of the Killing School Life endured by the disassembled (but not completely hopeless) 78th class of Hope’s Peak High. Encompassed by the franchise’s first game/anime adaptation, this zany and bitter series of mutual killings was (believe it or not) the horrific climax to an even darker, more messed up series of unfortunate events. And that’s where the Despair Arc comes in: it aims to chronicle the reign of terror staged by the one and only Mastermind, how their plans easily came to fruition, and the thrill they received because of it.

Simply put, what begins as a tale of hope ends in utter despair. And that’s what makes it one of the coolest anime to ever exist.

Unlike practically all of the other Danganronpa entries, Despair Arc is one of the very few to not feature a survival game of sorts. Yet, it’s still that kind of series in which its perilous situations—to your own disbelief—only grow worse, and worse, and worse . . . At this point in the story, the series’s iconically dooming mascot Monokuma doesn’t exist, so how does Despair Arc get its own fix of insanity? For the Mastermind, it’s as easy as 1, 2, 3!

That’s all it takes to watch the world crumble—and to think the Mastermind became Despair itself by manipulating their followers’ hatred, jealousy, fears, guilt, anything, really, through humor and charm. I know what you’re thinking—those three issues hit scarily close to home, don’t they? No, it’s definitely true. All around us, the world of this despair-infested fictional setting is slowly creeping into reality. Carnage is spreading. People are being unfairly treated and lambasted for factors beyond their own control. Nuclear war looms on the ember horizon. Great tensions that have lasted decades are about to bust loose with a fireworks show of death and depravity.

And the worst part is that we’re all just standing around watching it happen.

Despair is on the rise, and we’re only letting the movement grow.

While Despair Arc does rely on a couple cheap gimmicks to speed the Mastermind’s course of evil along (surely to accommodate the dreadfully short 11-episode length), the series takes the most wild, absurd, almost painfully realistic ideas and runs far with them. Very, very far. Somehow, Kodaka has written such a brilliant story that starts off all shining and bright and ends in utter ruin, perfectly encapsulating the range of human spirit at the onset fear and anarchy. After watching, you almost want to call the shot:

This is the future our own kids will be living unless we take action NOW.

It’s a terrifying thought, unbelievable at times, and that is exactly why—despite being a mere prequel to an incredibly exciting, well-written saga—Despair Arc serves more as a warning to the path this global society is currently treading. Although a stretch, nearly all of the horrific crimes committed in this series can be, or have already been, reproduced in our own lives, right at this very minute.

It may not be spear-headed by a single bored high school student, but all around us, people are rapidly growing more cynical, distrustful, and hateful than they have ever been. Despair is at an all-time high, and what’s even worse is that some sick individuals out there actually get off on this madness. The seeds of hopelessness have long-since been sown by humanity, and in just a few short years, months, or even days, the despair will blossom magnificently.

And only then will you be wishing you did something.

Hope is a state of harmony. Righteous and bright, and all that other BS. Despair is more fun. And it grows so quickly. Like mushrooms, over a single night. Despair is messy and confusing. And it ain’t much of a picky eater. It devours love, hate, the whole shebang. Despair takes the plans you’ve put all your faith into and rips ’em to shreds. You may think you’re above petty human desires, but you need Despair. When it’s calling the shots, all bets are off. You don’t wanna be bored outta your skull for the rest of forever, do ya? — Junko Enoshima

Long after The Tragedy of Hope’s Peak High, The Twilight Syndrome Murder Case, The Worst, Most Despair Inducing Incident in the History of Mankind, the Killing School Life, the Killing School Trip, and the Final Killing Game, AT LAST, the skies begin to clear up. Was it the proper ending to a masterful franchise that fans had been anticipating for several years? Well, maybe it wasn’t exactly everything that we wanted (or deserved), but thematically, all points reconnect and converge at this final crossroad splendidly. At the end of a dreadfully prolonged saga of despair suffocating what little justice remains, hope ultimately comes out on top—and brighter than ever.

There’s something infectious about being cynical for fun. We do it all the time on the internet, making sad jokes that mock the hilariousness of our pitiful lives. “We are not strong,” or at least as strong as we think we are, and we enjoy a mutual sense of humor in this fallacy. This emotion that plagues our very lives with pessimism—this negative philosophy that we can neither change the tides of destiny, nor amount to anything in the end—such is true despair. 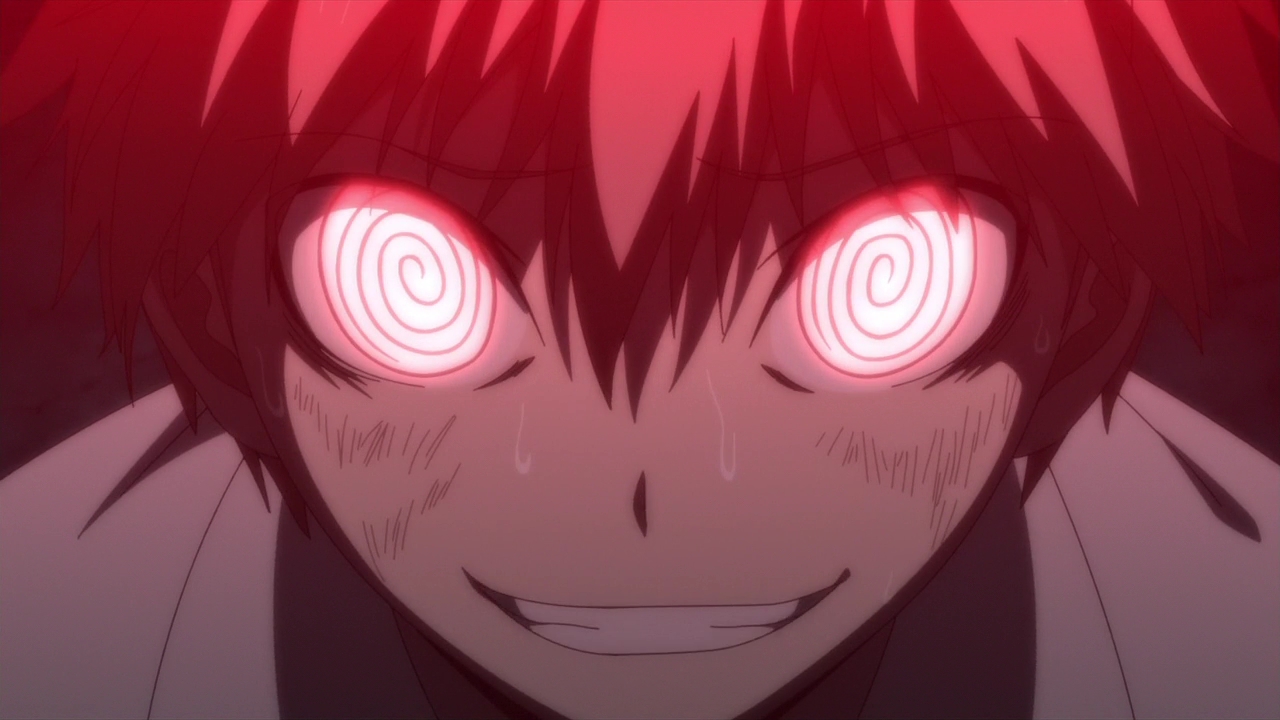 Naegi’s struggle to remain hopeful in one desolate situation after another brought him to his knees. But unlike Future Foundation’s Munakata (or most of today’s political leaders for that matter), he still looked up to those around him, believing that although despair teaches us hardship, hope preaches harmony. Despair may have relished the past and the present, but Naegi’s unwavering hope paved way for the future—his movement of hope snowballed into what can only be described as a truly contagious effort.

Hope is just way too stubborn to die. Despair can win the battle, but never the war. — Monaca Towa

All this and more is why I want you to think about how you approach communication with others. Do you start with a self-deprecating joke, or perhaps approach a conversation with praise or positivity for the given topic? The next time you log on to the internet—be it Twitter, Instagram, Facebook, forums, chat rooms, or other social media—do try your best to believe that there is still good in this wild world. We have the power to pick our battles, thus we should better learn when to restrain, and when to take matters into our own hands. Hope is but a simple four-letter word, and yet it has the power to shape generations, the life we live now, and the future that awaits us.

What that future looks like ultimately lies in our strength to fight the darkness, together.

Hard as we try, none of us can see the future. The horizon we walk toward is always obscured. The future’s always hazy. Hope and Despair mingle. We can’t always tell which is which. It’s strange. Sometimes terrifying. Still though, if all you do is sit and wait, nothing happens. The trick is to take it one step at a time. See, you don’t have to know the future to move forward. Just walk with your memories. Look up at the sky, and say to yourself, “There’s always Hope for tomorrow.” — Makoto Naegi

The entire Danganronpa franchise is incredibly dark, creative, intense, vulgar, and tons of fun to both play and watch. As such, it’s no surprise that I award Danganronpa 3: The End of Hope’s Peak High School with the certified “Caffe Mocha” rating. Especially with the Despair Arc, the series’s ability to not only account for all the nitpicky details, but string them together in a logical, story-telling format is admirable (even if some of the methods are a tad sub-par compared to, say, the second game’s beautifully corrupt and twisted ways). Aside from maybe Fate/Zero, Despair Arc is the greatest “beginning of the end” prequel anime to ever be written. Unlike all other told-from-zero stories, there is no happy ending to be found here, unless of course, you’re rooting for the Mastermind.

A bloody masterpiece of the whodunnit murder mystery genre, Danganronpa 3 tackles the near impossible and pulls it off with flying colors (and a lot of pink blood). I could go on and on about how much I love Lerche’s clean game-to-anime stylistic transfer, as well as Kodaka’s story, Masafumi Takada’s soundtrack, and ALL the damn characters, but alas! Perhaps for another post!

This concludes my May 23rd entry in the OWLS “Movement” blog tour. Gloria (The Nerdy Girl News) went right before me and wrote about the living differences between humans and robots, and what truly makes us human in the anime Beatless, a series that I’ve been meaning to check out since it started airing. Gloria is new to OWLS, so go give her some love! Now, look out for another new member, Dylan (DynamicDylan) over on YouTube, with a vid about the great Gundam Seed set to air tomorrow, May 24th! Thanks for reading, and until next time, this has been