August was a special month for me: first day of college, beginning my Funimation Now and Amazon Prime subscriptions, and most special of all, my birthday! Thank you so much to all those who sent me birthday wishes and good cheer that August 27th! It was just another reminder as to how many friends I’ve met thanks to blogging, and how far we’ve all gone together. From the bottom of my heart, thank you!

Now, my siblings like to go overboard on birthdays. They’re HUGE in my house. Like, even if you’re 40 or 50 you’re gonna get a ton of gifts and feel celebrated for—that’s just how we roll!

This year, my siblings asked for a list, and while that doesn’t guarantee anything will get picked, it gives them an idea of what I like (even though they already know by now). As always, I try to remain cost efficient, pulling together items that are currently on sale from various sites and places into one big list of fairly inexpensive anime-related items.

At the time, the biggest sale going on was Funimation’s end of summer (or was it middle of summer, I can’t remember) sale. We’re talking $5 films, $10 classics, and $30 new shows—that’s like RIDICULOUSLY CHEAP. And for that reason, I can understand why I received so many new titles. I’m now gonna brag about how cool they are by showing off what I got, so thanks bro and sis! 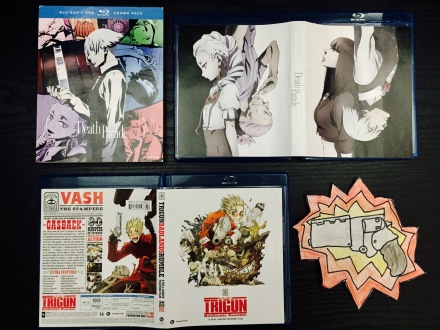 My sister gifted to me one of the big hitters, if not THE biggest, of 2015: the chic yet suspenseful Death Parade. We’ve already busted it open, and have been watching an episode each night to relieve stress (or to add to it since there’s so much suspense and, well, death). She also got me the Trigun: Badlands Rumble film, and while that’s neat and all, I don’t have Trigun, nor have I watched it. There’s a reason she gave it to me (and wrapped it in my signature paper wrapping decorated with hints to the show as a little guessing game) . . .

AND THIS is why she got me the film, hahaha she had coordinated with my brother!! Now I can enjoy this classic and not feel bad that they spent a ton of money on anything. He also got me the last book in the Bakemonogatari trilogy, which I’ve been reading since the first, Kizumonogatari.

But he doesn’t stop there, oh no. He got me the SECOND big-hitter of 2015, everybody’s favorite Blood Blockade Battlefront, as well as the next film in the Project Itoh trilogy, harmony. (I showed the first film, The Empire of Corpses, to them, and told them the history of the project’s writer. Guess it must’ve made him curious.) I haven’t watched either of these yet, but I can’t wait!!

To finish of my Ghost in the Shell collection (which I also showed to them the 1995 film), he got me the second of two OVA sets, which contains borders: 3 & 4, Ghost Tears and Ghost Stands Alone. While I thought that Arise was mediocre at best, I am a collector, and this is just as wonderful as receiving a 10/10 title!

LAST BUT NOT LEAST (oh god, how truly spoiled I am), he gifted to me this curious little oddity I found in the RightStuf 30th Anniversary sale, Freedom, which is supposedly from the creators of the apocalyptic Akira. I haven’t watched either of these yet, but I’m excited to explore more of the anime sci-fi branch and its origins. Plus it came in this stupidly high-quality box set (despite being under $30), complete with a mini artbook and YES black Blu-ray cases. Again, thank you so much bro!!

But OF COURSE, I had to spoil myself #treatyoself with two titles that I’ve been VERY excited to watch! The first, a short series (like Arise, composed of four or five one-hour-long episodes) which takes place between the legendary Code Geass‘s first and second seasons: Akito the Exiled. After rewatching the series with my siblings this past summer (which they ABSOLUTELY LOVED TO DEATH), getting this ASAP was a must. Now we can enjoy the events that took place between the two seasons, as well as witness stunning CG mecha fights. I’ve plugged in the first two episodes, and so far it’s quite entertaining. Oh, and it came with an art card set like the first did, YAY! (ugh I’m wet for Clamp artwork.)

The other movie I picked up was the wildly anticipated 2016 Japanese masterpiece film Shin Godzilla. I’m not a huge Godzilla fan, but knowing that Evangelion director Hidaeki Anno directed this project, too, made it a MUST HAVE. I NEED to know what he worked on between 3.33 and his upcoming 3.0+1.0 in order to understand the emotions running through his mind (or dare try), so the other title I need to pick up is Sentai Filmworks’ The Dragon Dentist, which I believe comes out in the fall.

I also know that Life-in-Japan YouTuber Sharla (Sharla in Japan, Sharmander) worked with the lead actors and actresses on pronouncing their English, as there is quite a bit despite being an otherwise subtitled film. I like Sharla, her videos being a large source of relaxation, exploration, and fun for me.

For another #TakutoMovieNight on Twiter, I watched Shin Godzilla as soon as it came in and I LOVED IT to pieces!!! Still not converted to a full-on Godzilla fan, haha, no, but the directing is very much like his films (1.11 especially), to which I honestly can’t get enough of. I’ll review it sometime if you’d like, just know that it’s already a thumbs up from me! When I watch it again, I’ll try out Funimation’s English track to see if it’s any good!

That’s all from me! For those wondering, I had a nice relaxing weekend with the family, to which we exchanged good food, laughs, and films together. Specifically, we continued the tradition of watching a film of my choice, and to follow up last year’s 1.11 (review here), we watched Evangelion 2.22 (review here).

Surprisingly, it left my parents intrigued as to what happens next, so my dad decided we’d watch 3.33 (review here) the following week. That made me happy. After watching it, however, they both got pretty confused (no surprise there), but I still think that they hold as much hope for the last film as I do, and that also reassures me.

In otherwords, it’s been a very Evangelion weekend, but I wouldn’t have it any other way~!

Again, big thank you to all who said such kind things to me throughout my little holiday!! I’ll be posting an End of August Update soon, so look forward to that! I really do have the BEST, most supportive family one could ever want, both IRL and through the net. Thanks for making my day that lil’ bit of “extra” we all need! Love you all, you party crew!!!