A brief spoiler-free review of the 13-episode spring 2016 anime “Boku no Hero Academia” or its English title “My Hero Academia,” produced by Bones, based on the manga by Kouhei Horikoshi.

***Dedicated to Crimson, a silly blogger pal and shipper of all things MHA. I hope you enjoy it ~!

So while all of his friends (more so enemies) set their sights on the prestigious UA High School, an intense school dedicated to raising heroes, Deku continues his menial routine of taking abundant notes on local big-shot heroes and especially eyeing his idol – The almighty All Might!!! (Yes, the exclamation points are necessary.)

Flash forward past the months of rigorous training and it’s enrollment time – and Deku is intent on making the student roster. Not surprised to see his rival Bakugo sitting at the back of the classroom, Deku’s new life full of new friendships and hardships begins. And through his academia, he will learn both the harsh realities and unmistakable joy that come with being a true hero.

The Underdog Reincarnated, But Made More Interesting

My Hero Academia succeeds in many merits, the obvious one showing the traditional underdog tale that we all like to resonate with through explosive visuals and just high production values overall. Call it cliché, but people still do want to watch the curly-haired nerd beat up the bad guys—it’s a tried-‘n-true formula, and Academia does not fail to meet the expectations of the genre. I dare say it trumps the more complicated plots of Hollywood hero films just because its lead character is so . . . well, you really, really want to watch him kick ass.

Deku is a kid with a big heart for heroes, and I wish I could say that about most people. Even though he’s been quirk-less since birth, his dreams are still set on UA and All Might, and while it was shattering to see that flashback of him finding out [insert meme here], I think that is what has made him such a loveable guy. Being of humble origins, obtaining powers from a supernatural source, and faced with challenges every day, every hour of the day, Deku practically had the hero formula drilled in him – And he knows it, too!

He’s SUPER enthusiastic about the whole hero bit. Watching him get all geeky about the city’s greats never fails to lift spirits, which is why when Deku is taken up on the aw-inspiring All Might’s offer, a part of me just cracked, then stitched itself together again. It’s a show that rewards not only its cast, but its viewers as well.

A Colorful Class of Soon-to-be Friends

There’s also the very interesting setting—a world where heroes are viewed by the media and the public as superstars. Their identities are still concealed behind their unique quirks, but for the fanboys like Deku, merely getting firsthand coverage of a battle is enough to wet pants.

But how do the kids in Deku’s class measure up? It’s hard to say. His class is HUGE, and to spend the first several episodes on Izuku’s background alone doesn’t leave much room for the rest. It’d be like if someone flashed you a bright and brilliant work of art, then quickly tucked it away. You’d never know if it was a masterpiece or not, but you sure as heck are interested! Beyond the playful and bouncy Uraraka Ochako (I love her name), the noble class officer Iida, and everyone’s favorite frog girl Asui, only Izuku’s rival Bakugo shares part of the spotlight. As a delinquent with rough features, watching his growth waver between righteousness and chaos really made for an interesting story arc. I only wish we got more attention for each of these quirky classmates, but given the brief runtime, there’s a lot of setting-up to do with the overarching story. 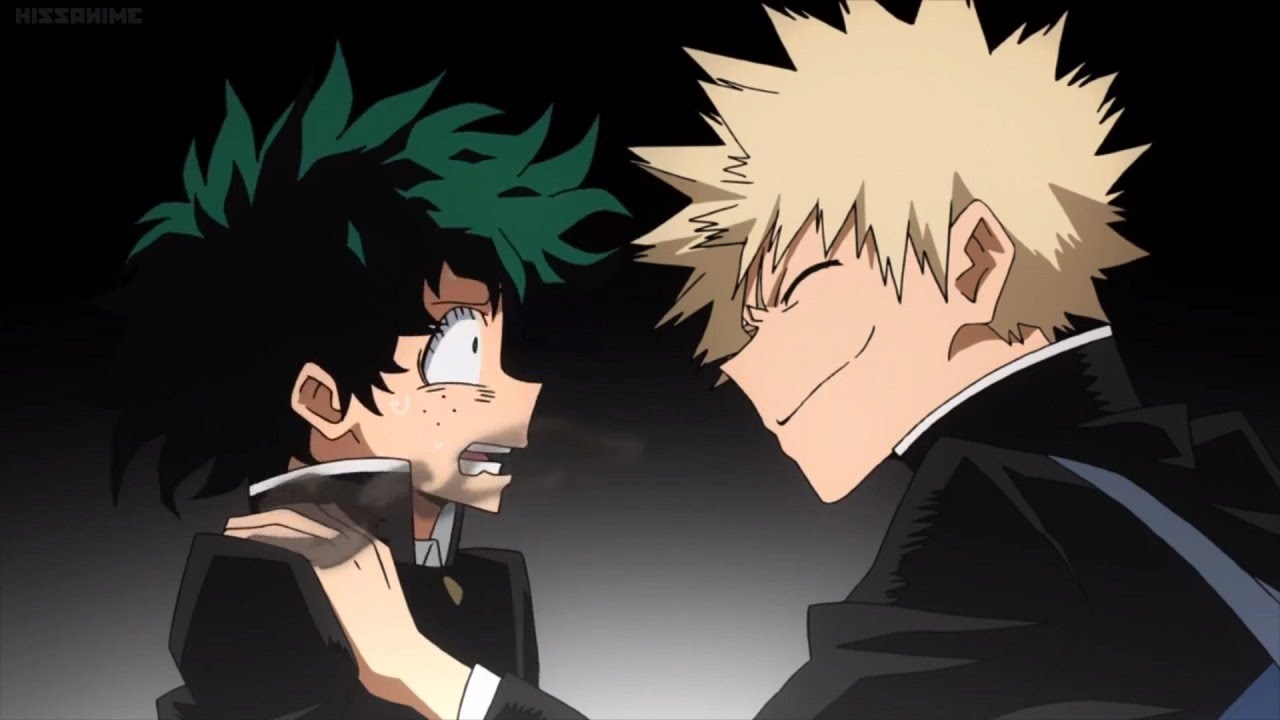 It helps that the animation is bright, active, and uncensored in the body fluids department . . . I’m talking about blood, sweat, tears, and snot, of course. The action scenes with All Might are particularly empowering. It’s saddening to see him shrink to his normal scrawny human physique after being buff and superior. I hope the animated part of the franchise carries that torch straight through to the end just like Deku is so far.

Studio Bones nails the cartoonish atmosphere and bubbly expressions of Izuku’s hobby, stringing out comedic slapstick reactions whenever possible to keep the tone light. Action scenes with the superpowers themselves draw us viewers into the wacky world where large-scale catastrophe is commonplace. That is, so long as a hero soars swiftly in to quell the fire. The character designs are all very individualistic and flashy, which does wonders in helping you remember who’s who. While the sharp facial designs and bold outlining in particular caught my eye, the frequent switch a softer and doughier style during school hours really bothered me. But as a whole, all of the actions culminates well into this high-intensity finale that’s furious in every single swing and punch.

As much as it’s simply a glance into the franchise, I like My Hero Academia’s first season. There’s not much else to be said that hasn’t been already. It’s a show about growing up, one of those feel-good anime that makes you want to run out and punch a guy in the face just because you get so hyped up with energy. Full of colorful action, comedy, super powers, and likable characters, My Hero Academia is a comic book come to life by THE studio Bones being Bones again. Should that not win you over, then ALL MIGHT himself is enough of an empowering reason to watch this show. To think that a second season was greenlit before production of the first was even over gets me all revved up for more. If you’re not already heading to class each with MHA, what’s going on? Add this anime to your schedule! PLUS ULTRAAAA!!!

“This is something I was once told: ‘Something that you receive because you’re lucky and something you’re given because you’re recognized are different in essence.’ Take that to heart. This is power that you earned because of your own effort.” – Our greatest hero, All Might

+ The All Might-Izuku-Bakugo relationship is especially an attention-grabber

If it seems like you’re having déjà vu, that might be because most of the ‘script’ for this review came from my Episodes 1-5 Thoughts a while back when it aired. I just didn’t feel like rewriting and regurgitating the same material, haha. But looking back at the spring season, this is definitely one of the bests to emerge—a 4/5 “caffe mocha” rating over here! Now that it’s all out, what are you waiting for? Head to FUNimation.com to watch the whole darn thing for free! I’ve also heard the English dub and can confirm that it’s also pretty solid, Izuku and All Might’s performances in particular. Now I’m just waiting for a physical release! Till next time, where we’ll be looking back at more 2016 spring titles,

“Go beyond,” awwww~ *sobs without resistance*