A brief, spoiler-free review of the 12-episode winter 2016 anime “Dimension W,” produced by Studio 3Hz, based on the manga by Yuji Iwahara.

Enter the near future – 2071 to be exact – and you’d find a world transformed and reinvented by “coils,” battery-like bolts which tap into the fourth dimension to channel unlimited energy. Though New Tesla energy company’s coils can be bought off shelves, secretive bootleggers would rather sell illegal coils to earn a living in this seemingly Utopian era.

Not if they are stopped by Collectors, though. These individuals hunt down private companies and illegal coils for a bounty, often living reckless and dangerous lives lit by the night sky. Dimension W enlarges the life of Kyouma Mabuchi, a Collector with a pretty scarred past that caused him to detest coils—He refuses to use them for anything, be it powering his car or a gun. On one particular spree, Kyouma runs into Mira, a robot girl who runs on coils like we rely on blood. As Kyouma grudgingly extends his rough hands for a partnership in the biz, the two uncover the truth of this elusive fourth dimension and how its entire foundation might actually stem from Kyouma’s long-lost past.

Looks are deceiving. Much as how Mira (despite being a robot) is surprisingly more humane than Kyouma, Dimension W has the solid setting to create an unimaginable sci-fi story, yet falls short in nearly every department. Namely, it fails to further explain what exactly a “coil” is. We know what they can power (and what happens when they are disrupted), but we don’t know how they work. And for a science fiction series, breaking down what futuristic concept is being introduced should be the first priority. Now, we did get a half-assed reasoning in the last episode, only to find out it was based on a faulty concept all along. Pretty sure that’s not how energy works . . .

Where this anime does shine is in its characters. Specifically, the leads, Kyouma and Mira. The dynamic between them is great, the vintage Kyouma always muttering “piece of junk” rather than the android’s name as if he defies the idea that coils can produce something so human in nature. In fact, he’s like an old man resisting an iPhone because he knows how unprotected technology leaves folks these days. Kyouma’s veteran past may have left him stubborn and grim, but Mira, for some odd reason, is able to break through his wall and find a beating heart under that worn, red happi coat of his. I mean, Mira is adorable as f***, so it makes sense. Over the course of the series, Kyouma will grow to accept and respect this lime-haired heroine, and that development in itself is a huge driving factor for the show.

The actual plot lacks a cohesive run. Dimension W’s first five episodes are an incredible mix of mystery, high-energy action, and wonder (I even thought for a while there the title’s “W” stood as such), but after an intense two-episode story midway, the setting is shifted towards a location rooted in memories of the past – Easter Island – and the plot becomes unraveling the events which took place back during Kyouma’s Grendel days. We seem to have ditched building on the futuristic setting and the ‘wonder’ surrounding the coils for a lame survival battle with a crap ton of new characters with zero background. Like, what? I thought the show was about Mira and Kyouma and their suspenseful jobs as Collectors fighting off the enigmatic masked cyborg “Loser.” This could’ve been the next Psycho-Pass, but instead we got yet another sci-fi with an unmemorable plot! All was especially disappointing considering FUNimation Entertainment’s first-ever assistance/partnership with the show’s production. I was really hoping for a bang!

At least the technical execution was pretty faithful. Very little has come from Studio 3Hz, but the team managed to pull off a halfway decent-looking anime. While watching Kyouma throw his skewers all over the place was amusing, there were quite a few noticeable shortcuts made. One is that on occasion, characters will be zoomed up during dialogue with solid-colored backgrounds behind them. Another was the lazy animation in the last couple of fights, particularly that of with the show’s lame antagonist. Again, I really enjoyed the character designs and the first few episodes. After that, not so much. 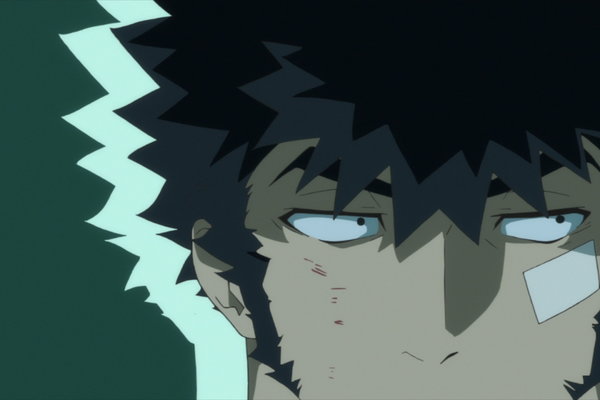 What really got me was Yoshiaki Fujisawa’s epic music. You may recognize his soundtracks in Gate, Love Live!, Yuri Yuri, and others. Watching FUNimation’s Production Diaries on YouTube, we got insight into his inspiration for writing not only DW’s music, but soundtracks in general. Really interesting stuff for a music buff like myself.

By now it should be no surprise to you that I was pretty disappointed with this anime, especially after seeing many behind-the-scenes clips and knowing the work that went into the project. When it comes down to it, the plot is the one at fault. Dimension W had great potential, starting off with strong leads and an impressive premise. Once the ball got rolling, all I kept doing was looking back at the previous episodes (well, that and the clock to see how much more time I had to wade through), and I felt the show itself was doing the exact same thing. The conclusion was also pretty lousy, given that I came in wanting to exploit the coil system rather than the scientists who made it. Fantastic start, but a hard flop to the finish.

“I think things that remain even after time passes are wonderful. It’s proof that the people who made them and used them were alive. By holding them dear, I think it makes the present shine even more.” – Kyouma’s wife, Miyabi Azumaya

Enough about being trapped in the past! What did you think of Dimension W? Did you make it all the way through? I know several decided to drop the show, and while I wish I was able to do that, I’m the kind of guy that needs to see things through ‘till the end. My report: Dimension W will be recognized as a “Coffee” here at the café! Not bad, just a bit too bitter for my taste. I’m still catching up on comments from the last review, but let’s talk more about the show down below! Until next time, this has been