A brief spoiler-free review of the 12-episode spring 2017 anime “WorldEnd: What are you doing at the end of the world? Are you busy? Will you save us?”, also known as “SukaSuka,” animated by Satelight and C2C, directed by Junichi Wada, and based on Akira Kareno’s light novel series of the same name.

At the End of the World

Awakening from a cryogenic slumber 500 years after his ferocious fight with a mysterious monster, Willem Kmetsch finds himself to be the last human alive. During his icy slumber, creatures of terrifying proportions known as “Beasts” emerged on Earth’s surface and destroyed the human race—all except for one, that is. Together with the other surviving races of this fantasy world, Willem takes refuge in the floating islands, living in fear of what terror still lies below. His new life feels lonely and meaningless, for all he has tied to him now is a number of odd jobs to merely get by.

One day, a surprise offer to become a weapons storehouse caretaker graces Willem’s presence, to which he takes thinking nothing of it. When arriving at this “warehouse,” however, he finds it not to be filled with guns and other arms, but instead a handful of young girls. And boy are they a handful. Connecting the dots, Willem realizes that these Leprechauns, though resembling humans, have no regard for their own lives, as they identify themselves as mere weapons of war. These are the weapons he was tasked to look after.

Becoming something of a father figure for the young Leprechauns, Willem spends his days watching over them fondly and supporting them in any way he can. Among them is blue-haired Chtholly Nota Seniorious, the dutiful yet stubborn eldest who is more than willing to sacrifice herself if it means defeating the Beasts and safeguarding peace. The two strike up an endearing relationship, and as Leprechauns are sent off to battle at the end of the world, Willem—who knows the tragedies of war all too well—can only cling to the hope that those who fight bravely will someday return home safe and sound.

I remember this plot stirring up a lot of hearts back when it aired in 2017, but I found myself emotionally detached from not only most of the characters but also the story itself. It’s kind of like Seraph of the End‘s opening in that you are shown a deeply impressionable first episode (made notable largely for its music, which I’ll get to), and then directed to an entirely different story. For me at least, the show has a hard time of maintaining a particular mood, be it happiness, sadness, or somewhere in between.

It also quite honestly feels like WorldEnd is trying to balance so many different genres that it fails to excel at any of them. While it’s certainly not an action series, it wouldn’t be proper to label it as slice of life. But it does have enough excitement to be this weird sci-fi/fantasy blend, something that definitely makes it feel like a light novel adaptation. Romance might be a better genre category, but even then the dramatic intensity is ALL over the place, hardly a fit for a “true” story of love and romance. 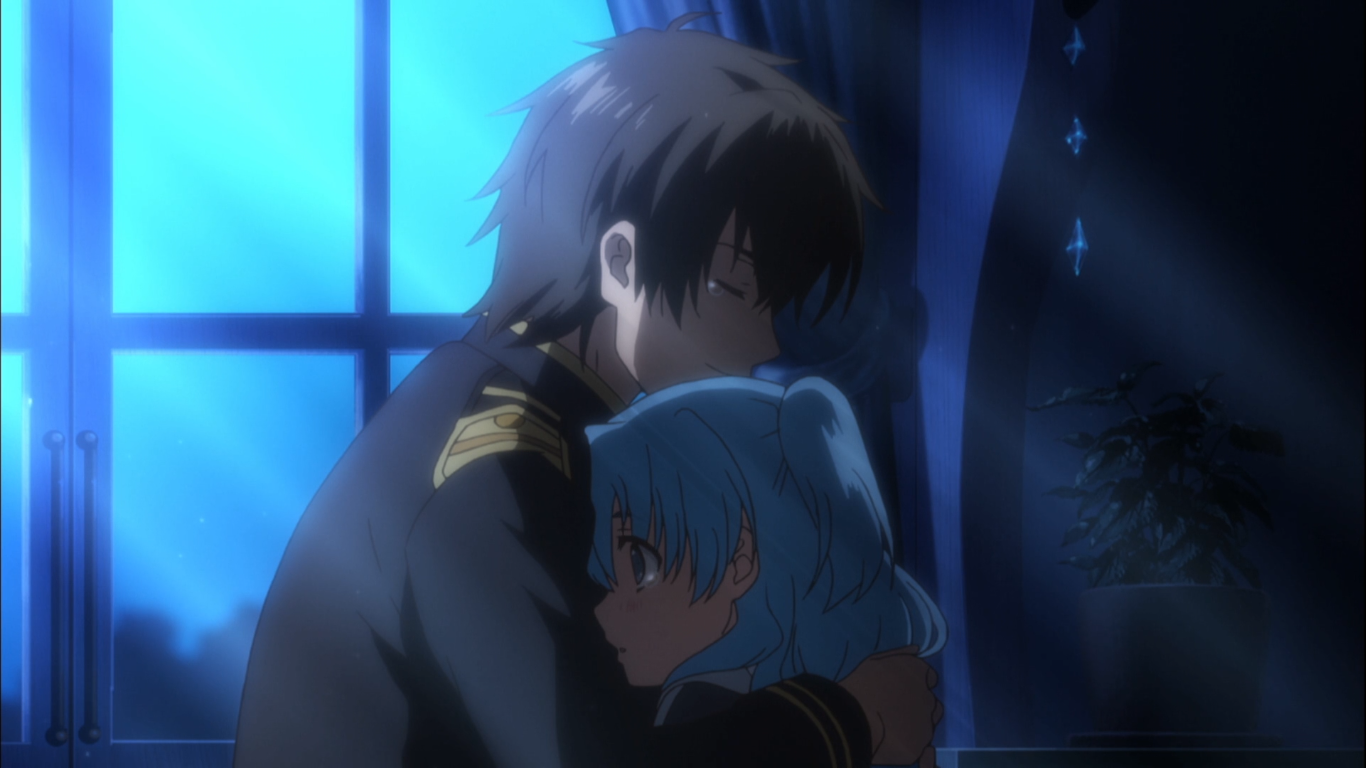 All the Lolis in the World Can’t Make You Relatable

Ready for me to break some hearts? Alright, well I’ll start with Willem, the story’s “hero” who falls for the girl doomed to a terrible fate. While I enjoy the message of defying said fate and cautiously yet optimistically gazing toward the future, I just couldn’t get into Willem’s character. Let me explain.

His unusual circumstances as “weapons keeper” places him with the undivided attention of all the lolicauns (heh, get it?). Each of their little problems are designed to unfold around him with the intent of unlocking a new facet of his character. Oh, so we find out everyone is afraid of him? Makes sense, he’s a human and a dude at that. But he’s a good cook? And he’s able to make them all love him through food? How convenient. But wait, he can also tune their weapons, a quality that is unique only to him. And we can’t forget that he’s a lover of little kids, a pro nurse, and a massage therapist, too. Plus, even though he can whoop all of these magical fairies in combat, he’s totally willing to die for them at any given time, OF COURSE.

Willem is just . . . too perfect, and I just couldn’t connect with him because of his overwhelming home-ec expertise. And speaking of disconnection, I never really cared for Chtholly, the lead female, as much as I was *supposed* to either. The two are cute together, don’t get me wrong, but I only recall like one or two instances where I thought their chemistry felt honest and true—and not being manipulated by the choppy plot lines. 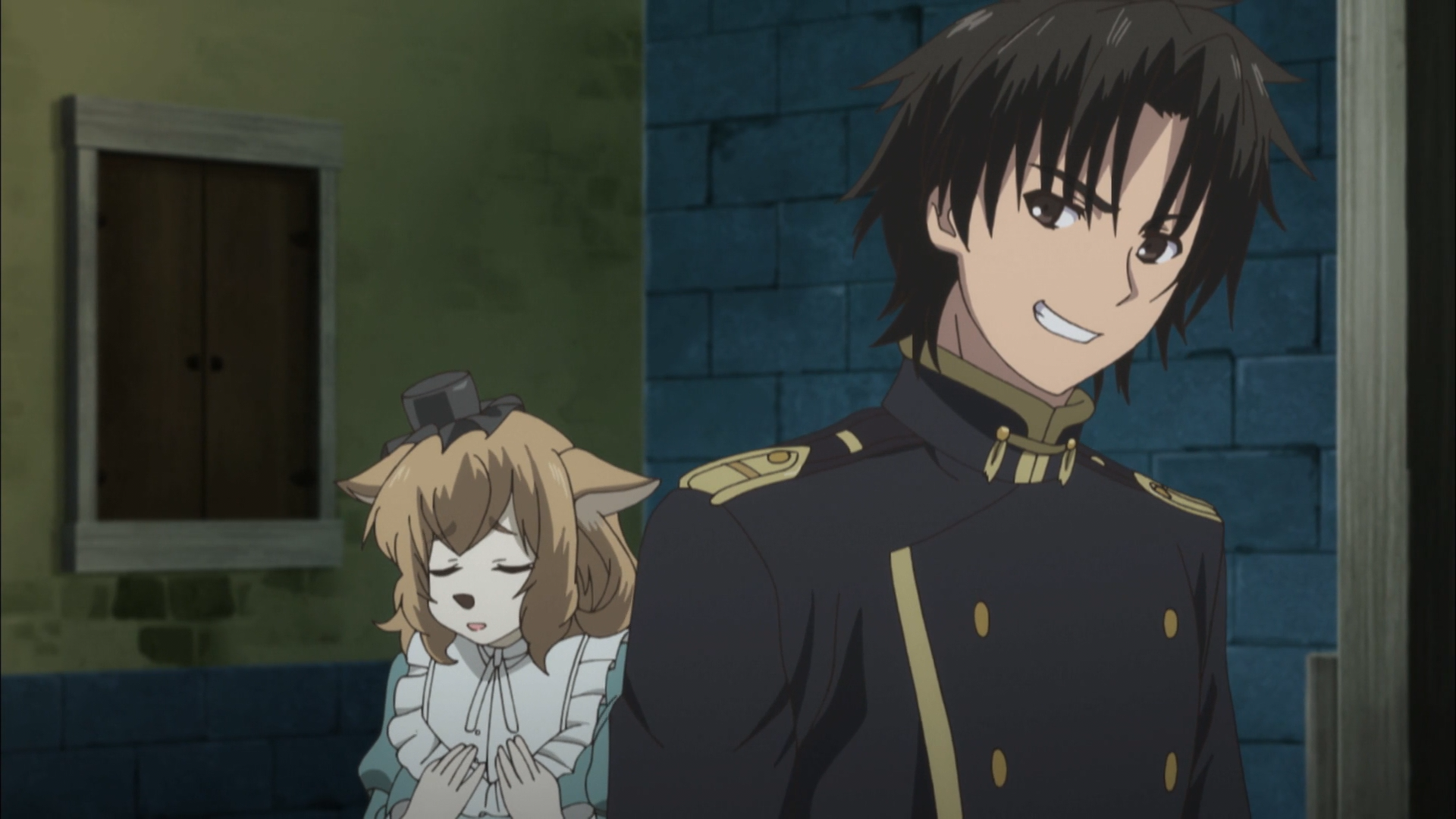 “Are you going to Scarborough Fair?”

Studios Satelite and C2C team up to animate this breathtaking fantasy world and it’s . . . alright? Aside from a few gorgeous landscape shots, the animation merely gets the job done. WorldEnd’s characters are drawn delicately, and the copious amounts of crimson blood that spill out during the fight scenes create quite the stark contrast (which I believe was the point). Given the lack of brazen fanservice we’ve come to see with these LN adaptations, the modesty here sure is appreciated. All in all, it may not be worth solely watching for the animation, but there is one production component that makes WorldEnd stand above the crowd: Tatsuya Katou’s soundtrack.

I’m a sucker for insert songs. They can hype up a scene to unbelievable levels and allow emotions transcend logic, a quality which can be tricky to master. But oh man does Tatsuya Katou have it down. Specifically here, he arranges traditional English ballads and folk songs as insert songs. Between the rich and powerful “Scarborough Fair” opening up this story’s curtains in episode one to the deeply resonate “Always in my Heart” closing out the final fight, it’s easy to be moved to tears. I still get goosebumps thinking about it. Both sung in English by the graceful Tamaru Yamada, these insert songs become perfect representations of WorldEnd‘s tragic duality.

The rest of the OST maintains this same orchestral beauty: soaring strings, somber violin solos, cheerful guitar, blissful piano—a winning combination. Absolutely fantastic, and perfect for the fantasy atmosphere. Also worthy of mention is the series’ OP “DEAREST DROP” by Azusa Tadokoro, a song that easily made it into my personal music playlist.

For English dub fans, Funimation’s got you covered. Perhaps it’s because I didn’t exactly enjoy Willem’s character, but this isn’t my favorite Micah Solusod performance. Amber Lee Connors’ Chtholly definitely grows on you if you allow her a few episodes, though. Overall, I’m still curious about how the Japanese handled the emotional scenes, but the dub works just fine.

Between a story that is neither this nor that and a bland protagonist that I just couldn’t seem to connect with, we’ve got a few touching scenes weakly strung together by a heavy reliance on the viewer loving the cast. The romance genre hinges on your attachment to (at least one of) the leads, making it almost entirely based on personal preference (to which I didn’t quite fancy here). At least it has some encouraging messages on embracing oneself through the process of change.

I wanted to love this anime with all my heart—after all, it was the talk of 2017 for quite some time. But in the end, a lack of connection—between plot points, characters, and myself as the viewer—prevents me from recommending the series unconditionally. There’s something special going on here, there really is, but I don’t think this anime adaptation showcases WorldEnd at its true best.

I can’t find happiness, meaning there’s really no reason to pursue it. How can one pursue what they already have? Don’t you understand—I’m already the happiest girl in the world. — Chtholly

I admittedly feel terrible for spitting on this beloved title. But if it makes fans feel better, I would like to check out the original light novel series some day, as I’ve heard wonderful things from people who are reading it. By the way, THAT TITLE THO. This is LN culture at its peak. For all those curious, WorldEnd: What are you doing at the end of the world? Are you busy? Will you save us? is rated a “Coffee” here at the cafe, a show that’s rich in all the right areas, and quite possibly satisfying if its characters can win over your heart.

Do you have any thoughts on this sweet little title? Let me know if you share some of the same disappointments or praises of WorldEnd that I do in the comments. I’d totally be willing to give this title a second try if given the reason to, so come and voice your thoughts on WorldEnd or this review! Thanks for reading, and until next time, this has been