Hey everyone, welcome to day 8 of Blogmas! This past summer, two sports anime aired simultaneously, and I decided to follow them to see which would wind out on top! Today I present a review of the show that finished airing first, the anime about a boys diving club and their ambition to enter the Olympics!

The Summer of Sports: A Review of DIVE!!

A brief spoiler-free review of the summer 2017 anime “DIVE!!,” produced by Zer-G, directed by Kaoru Suzuki, based on the novel series by Eto Mori.

Gazing up at the Concrete Dragon

A young Tomoki Sakai was inspired to join the Mizuki Diving Club (MDC) after witnessing its pride and joy member Yoichi Fujitani dive from high up off a giant captivating “Concrete Dragon.” Though the imposing diving platforms don’t literally stretch into the sky like a dragon would, the 10-meter height is enough to turn off most children and adults alike. But to Tomoki, Yoichi’s single dive proved that people can reach even greater heights through the daring sport, and thus he joins.

Years of practice and good memories pass. Eventually suffering from significant financial troubles and on the verge of closure, the MDC hires a new coach as a last-ditch effort to promote its divers. This new coach manages to persuade the club’s sponsors to stay open, but only on one condition: the club must send one of its members to the Olympics in just a year’s time.

If DIVE!! had one big gray area where it needed work, it’s right here in the plot. True sports anime have this natural tendency to hype you up as you’re watching. You may not know the rules of the sport, nor the backgrounds of all the characters, but there’s still a level of heart-pounding adrenaline to every failed goal, missed shot, or faulty start. DIVE!!, simply put, isn’t all that exciting. Even at its climax, I couldn’t help but compare it to how another water sports anime, Free!, handled its enthusiasm through its incredible character growth and thrilling animation sequences. It just wasn’t there for DIVE!! (which is ironic, because its title boasts two exclamation points), and I think there are other reasons for why it flopped as a sports anime.

Where most sports anime dedicate a decent portion at the beginning to understanding why the sport is so beloved by its cast, we only really have two characters to go off of: Yoichi and Tomo. Even then, Tomo just wants to feel special and catch up to Yoichi, while Yoichi seems like he could hardly care less about it all—he happened to be born with diving talents, that’s all. The goal is the Olympics, but I can’t even seem to muster the heart to cheer for these boys during practice when they keep skippin’ all the time! Sure, characters like Okitsu’s grandfather and Coach Asaki fill in that void later on, but by then, most of my interest had already been lost.

Also, and this is a nitpick, as many good sports anime can still be notorious for this, but the lack of explanation of how scoring works, or why certain techniques are more difficult than others not only increases my disinterest, but it hurts the series’s ending: Were Yoichi and Tomo’s scores really that good? What does a standard Olympic score even look like, and where do those numbers come from anyway? What makes a triple flip that much more special than a quadruple, and what kinds of people can achieve this level of technique? Tomo is seriously just a middle schooler—can middle schoolers even enter the freakin’ Olympics?? So many questions, and no answers to be found anywhere. It almost begs me to ask whether this show is worth watching anymore. Well, if it weren’t for the characters, I’d give it a hard pass for sure. 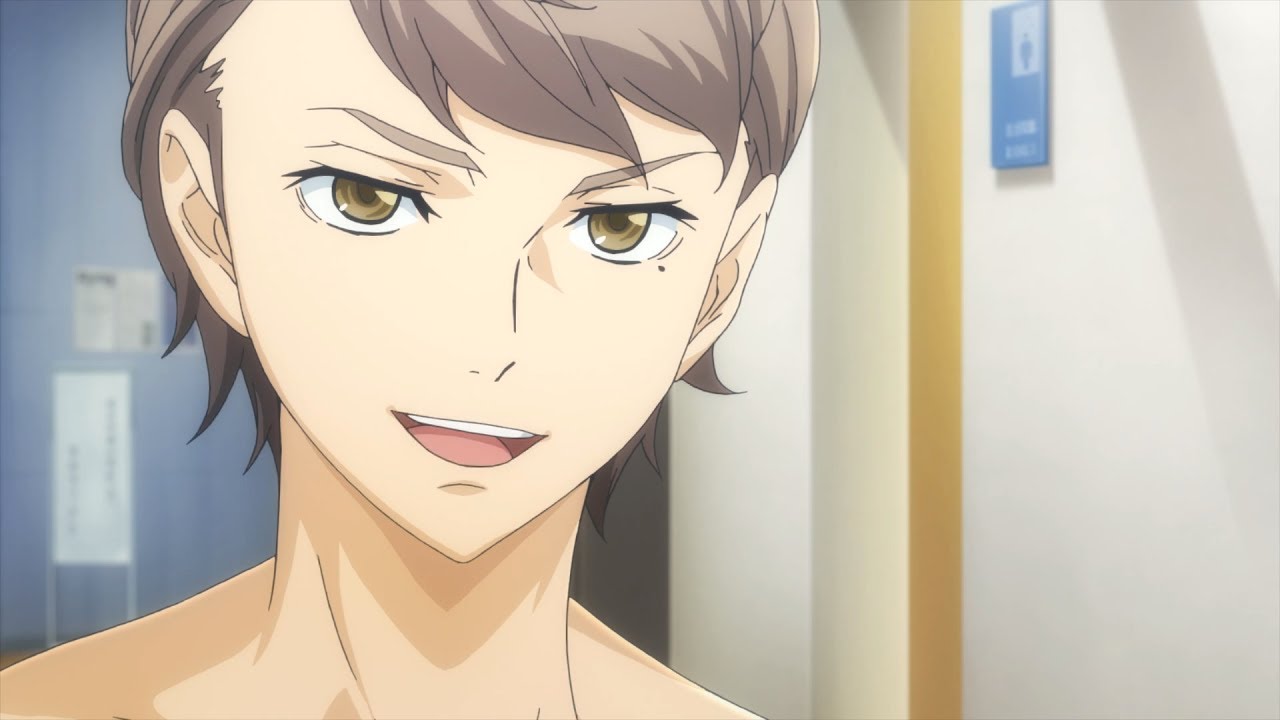 How Realism Shakes Up the Status Quo

As I mentioned earlier, we reach a point in the story where club members start dropping practice one-by-one, each rotating back in only for another overly sensitive boy to leave. Not everyone likes the new competition brought by suddenly raising the bar. Coaches Asaki and Fujitani (Yoichi’s dad) quickly pick their favorites, and it is that favoritism which causes jealousy and rage to seed themselves within the minds of Ryou and Reiji, Tomo’s “friends.” Ryou’s straightforwardness constantly clashes with Coach Asaki’s partiality to Tomo, and Reiji faces his own internal conflict of competition anxiety. It’s a lose-lose situation for both parties, yet it all somehow feels so . . . real. While anime like Free! glorify friendship and rivalry during swim meets, DIVE!! says that sometimes athletes don’t recover from lost pride, and that team members DO in real life leave the teams that isolate them. Aside from the MDC boys feeling way too young for the Olympics, it’s DIVE!!‘s realism that almost saves it in the end.

Take Yoichi, for instance. He’s basically perfect: talented, hardworking, a natural born leader, has a great body, etc. But the guy can’t get a girlfriend, and he eventually faces burnout due to, well, a couple reasons. One is that he feels pushed by everyone, especially his father, to make it into the Olympics—and he totally wants to go, but he becomes sick of the pressure and expectations set by all those around him. The second is his realization that the Olympics almost seems to market its athletes more than support them. In what is definitely DIVE!!‘s saving plot point, understanding how the Olympics’s way of promoting and advertising its fine athletes affects people like Yoichi opens up a whole new level of devastation. It was, to be frank, Yoichi’s unexpected fall from grace. Ka-chan, an aniblogger friend of mine detailed Yoichi’s character conflict with the Olympics’s abuse of athletes for money in a very interesting post, which I’ll link here!

MDC’s latest member, the towering island boy Okitsu, also has a short yet fairly impressive arc dedicated to his own passion for diving. Born and raised along the coast, Okitsu’s only ever been familiar with ocean diving. For him, the pool is like a cage, but he joins MDC nonetheless after Coach Asaki enlightens him on his late grandfather’s stunning pro-diving career. It was honestly a well-done plot point, and I likely won’t ever forget it. Watching a coach bond with her pupils like this was how it should’ve been done for everyone; she’s an integral character for this story. But there’s one character that caught Coach Asaki’s eye more than anyone. 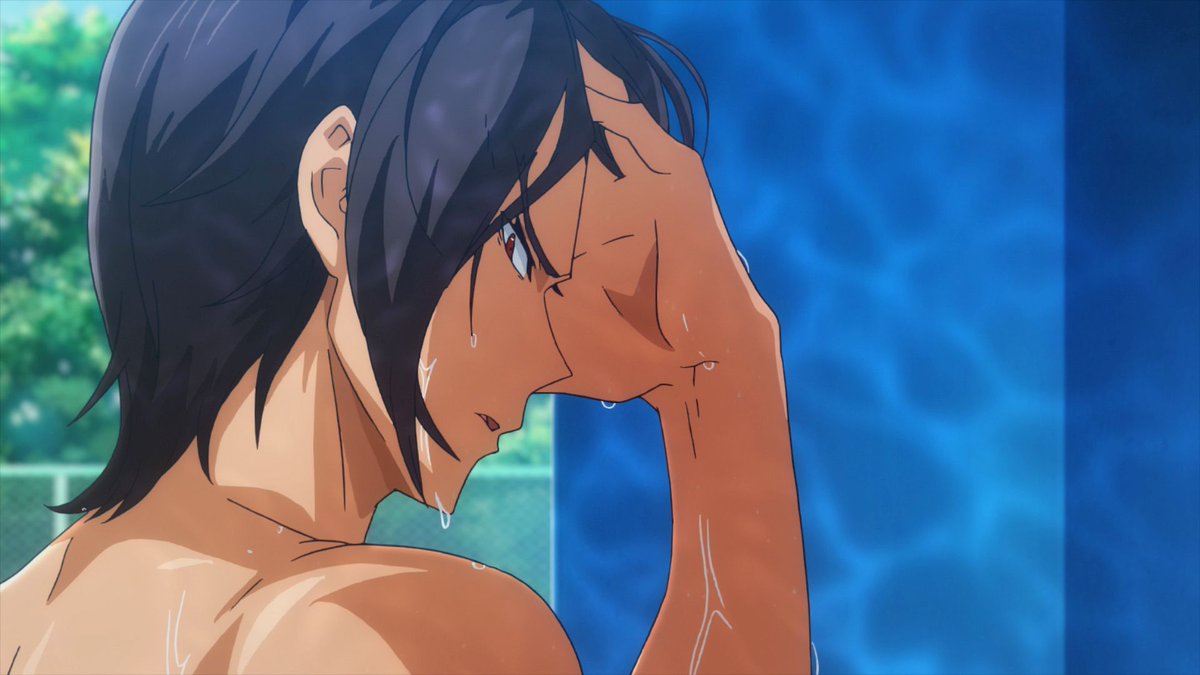 “Why is Tomoki so special?” Very good question. Nicknamed “Diamond Eyes” for his dynamic vision, Tomo’s as natural a diver as they come. And like all diamonds, they need a fair amount of polishing in order to truly shine. Between Coach Asaki’s intense regimen to shape Tomo into one of Japan’s greatest divers to experiencing a sense of betrayal by his closest friends, including his girlfriend, Tomo comes to realize that many sacrifices must be made to excel at something: sleep, food, free time, energy for other passions, a chance at friendship and love. Admittedly, Tomo being that distraught about losing hid girlfriend and moping about it the whole time was dumb. He’s slow to others’ feelings, and that too is quite frustrating. But nonetheless, he learns that sometimes being good at something requires you to distance yourself from others. Having him voiced by Yuki Kaji was a HUGE win for me, but ultimately, Tomo is one of the weaker characters in the story.

Diving So Stiff that it Hurts to Watch

As I mentioned earlier, the best sports anime usually have decent to top-tier animation. It sounds very privileged of me to say that a certain anime needs to look this way or that, but man, a huge problem with DIVE!! is that it’s just not pretty to look at. Artwork? Absolutely gorgeous color palette with chiseled abs (for those in need). The water? Looks smooth enough. The divers themselves? Let’s just say they are animated so stiffly that it hurts your back to watch.

The soundtrack though, oh my gosh, it’s surprisingly great! Kohta Yamamoto hasn’t done much work for anime, but he knows how to rouse up a dramatic track when it’s needed. It helps that the music was credited to two individuals, however, the second being the great Yuuki Hayashi (Robotics;Notes, My Hero Academia!, Death Parade)! And while the OP  “Taiyou mo Hitoribocchi” by Qyoto pumped you up (for what you thought would be some good sports fun), the ED “NEW WORLD” by Yuuta Hashimoto was THE REAL BOP OF THE SUMMER. SERIOUSLY GUYS, “NEW WORLD” IS PROBABLY MY FAVORITE SONG OF ALL THE SIMULCASTS I STREAMED THIS YEAR. It’s just so melancholic, so bittersweet, so befitting of everything that DIVE!! tried to be.

Surpass the Limits You Set for Yourself

Arguably, DIVE!! is not a sports anime, but rather a character-driven coming-of-age story for the main characters. It highlights the experiences—both good and bad, done with a team and alone—that sports can bring, as well as the realities plaguing growing teenage athletes. Unlike the happy-go-lucky Free!, DIVE!! teaches us that sometimes being good at something requires you to distance yourself from others. You must decide for yourself what’s best for you, and sometimes that choice doesn’t follow what others want—that’s ok. Through diving:

Unlike any sports anime that I’ve ever seen, DIVE!! focuses on the things given up or lost, rather than what is gained. Diving is solely an individual, all-or-nothing sport, after all. But even as a “diving anime,” I couldn’t distinguish between a good dive and a bad one due to the uneven animation, not that it mattered because the plot was so unfocused (the finale looked great, though). Much like its characters, DIVE!! tried to pave its own destiny, but ultimately flopped as truly engaging sports anime—or even as a piece of entertainment for that matter.

Diving is a competition that requires many long years of practice. Their future is a long one. Our duty isn’t to show them the shortcuts, but rather to teach them about the length. – Coach Fujitani

Don’t get me wrong—despite all the crap I gave its animation and plot issues, I still actually like DIVE!!. At the very least, I clearly tried to see the good in its character development . . . maybe it’s because water sports resonate so much with me, or that I just like sports anime too much. It’s not unbearable, but you’re better off watching something else if you’re craving the thrill that comes from the genre. It’s been a while since I awarded anything with this, but DIVE!! deserves the “Coffee” recognition, as there is some decent content hidden deep below the water’s depths—if only the plot development didn’t merely skim the surface. 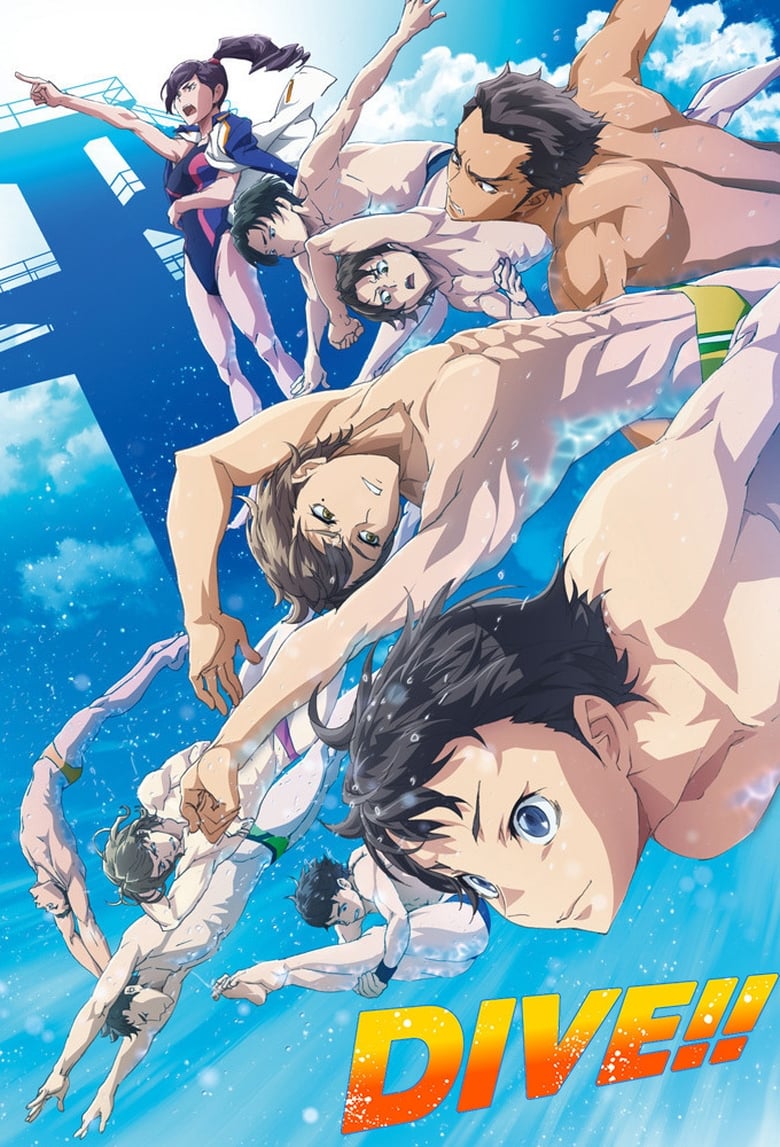 Let me know what you thought of DIVE!! if you happened to watch it! Not many people did, but I’d still love to know your experience with it. This wrap up Blogmas Day Eight of the 12 Days of Anime, as well as part 1 of “The Summer of Sports!” Thanks for reading, and I’ll catch you all tomorrow for part 2!