I’m back the second “Cafe Talk,” and today I’m here to ramble on about how I got into anime. It’s quite the embarrassing story, but I figured I let someone know. Lord, this one’s for the history books, gosh. The rest of the chat is my journey through the beginnings of anime. I hope you enjoy!

O.K. So I had known about Sailor Moon, Yu-Gi-Oh, and Pokemon when I was a young child but I never really knew that they were “anime.” In fact, I didn’t know what “anime” was. The closest things that hooked me on the Japanese culture were Ghibli films Kiki’s Delivery Service and Castle in the Sky.

Yeah, that’s the one.

I watched it in three parts, and fell in love with the animation style, the art, the comedy OMG, the voices (in English – go Greg Ayres!), the boobs plot – everything! I then went on to research the main series, watch it all and if you want to know my weaboo thoughts on my first anime series, click here to read my first ever review!!

Back to the topic, for those who’ve seen Negima!?, you’ll know that besides comedy, magical fanservice and a poor shota boy-genius, there’s actually a lot of great animated action sequences to accompany the main story (that’s studio Shaft for ya’ll) – and that is what hooked me most, the gripping action.

Back on YouTube, I saw “Top 10 OPs” and “Best Fight Scenes,” and while those all amazed me (and weirded me out at the same time), what I ended up sliding the cursor over was “Japanese Tales Of Symphonia Opening.” *click*

I was blown away.

What I came across was an enchanting ballad where fights in glorious animation were commonplace – the Tales of Series, and specifically my favorite Tales of Symphonia. I had hit the entertainment goldmine for a youth in desperate search of heartbreaking and relatable characters, incredible stories, and all of it brought to life not as a game, however, but as video entertainment – anime.

From there, anime only continues to secretly provide me with an escape from everything in the real world, not that anything was particularly bad, but ya know, boring as all hell.

Shows like No.6 and Ef – A Tale of Memories and Melodies invoked  periods of pure sadness yet true joy at the same time through memorable romantic ties and gut wrenching tragedies.

Head-scratchers like Steins;Gate opened up my brain to its full capacity with a beautiful story revealing the cruelties of time, showing me that there’s a deeper meaning behind very tiny details (SYMBOLISM) such as blue butterflies, microwaves and lab member pins . . .

This is it right here. I’ll never look at normal things ever again. Thanks anime.

Crossover shows like A Certain Scientific Railgun/Magical Index forced me to realize that no matter your level or rank, you can still impact lives and make true friends, all while being a badass at the same time!

Even Free! – Iwatobi Swim Club inspired me to go out for my first sport ever – swimming – and I’ll never forget the fun times that they had and all the amazing memories that I would make myself!

A hundred or so anime passed. This leads me to my “common era.” I participate in simulcasts, check the anime news, indulge myself in the industry – it’s great and all, but can I just return to the old days? Even for just a sec?

Probably not. So that’s why I started reviewing.

Maybe, just maybe, I can find that thrill of untapped territory once again if I explore some of the aspects that made me love anime so much! Then, perhaps, I could uncover the sweet, sweet bliss like I did back then. Don’t get me wrong, there have been TONS of great shows that I’ve watched after that, some I’d even call masterpieces, but each anime feels different, and that feeling can be a double-edged sword. Did I get really into the show and “feel it,” or did it just have good concepts?

I’m Takuto, and while I operate this cafe and meet all of you wonderful people, I have a deeper quest, and that is to find that “feeling” I felt during those days. It’s indescribable, almost lustful at times, but I’ll find it for sure! 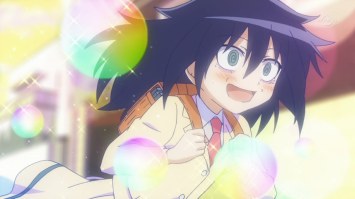 Chasing after the feels.

Do you understand that feel that I’m talking about, or do I just sound like a crazy guy – well, that one’s probably a guarantee, but regardless LOL, do I make sense? Did you know anime when you first saw it, or was it just a good ol’ childhood show? What was your first non-childhood anime? Also, I put pictures for the first time! Comment below because man, I’m getting tongue-tied! Haha thanks so much for reading and until next time, this has been