A spoiler-free review of the 13-episode summer 2015 anime “Charlotte,” produced by P.A. Works, based on the original story by Jun Maeda (Angel Beats!, Clannad).

“What the heck, Takuto? Charlotte? Really, Charlotte??” Actually, yes, I’m not pulling your leg. I originally wasn’t going to watch this anime, as I heard it didn’t live up to the hype, but something in me clicked (my love for P.A. Works), and I found myself attempting to marathon this thing at 1 A.M. It took me three days to finish (sad, really) but I thought I’d share why you actually might want to check Charlotte out. Surprised? Keep reading. 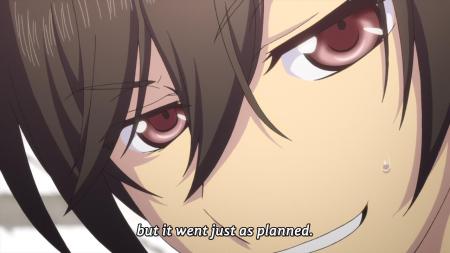 Yuu Otosaka is what I would call a lucky bastard (at least in the beginning). Blessed with charm, wit, and outstanding looks, he also possesses a secret ability to take over a person’s body for five seconds at a time. Being a teenage boy, Yuu abuses his gift to slip into female bodies (wouldn’t blame him), have some fun with bullies, and cheat on tests to slide into a prestigious high school

Just as life couldn’t be more sunny for Mr. Cheater, camcorder-wielding Nao Tomori, a deadpan invisibility-user, catches on to Yuu’s tricks, leaving him and his li’l sis one option: Transfer to Hoshinoumi Academy, a school for students with these supernatural abilities. Yuu, incredibly flustered, agrees solemnly.

There, he is forced to join the student council led by Tomori, where their task includes stealthily tracking down ability-abusers like himself and dragging them back to the academy. As these reconnaissance missions push the student council to their limits, however, Yuu unravels more shocking truths of the world around him, and that his own ability holds much, much, more potential than merely peeking down a girl’s shirt.

Jun Maeda has this gift for instantly allowing me to fall in love with his characters through simple, occasionally childish actions. That said, he’d be a lot better writer if his stories didn’t have 500-FREAKIN’ teenagers in them! I’m not criticizing him in ANY way at all, and I understand that the story needed a new dude or two, but the anime’s latter half could have gone without the introduction and glossing over of ten new characters. Why not just use-rinse-repeat with the student council members? We already fell in love with them.

Before I move on, I’d like to enforce how much I love the Otosakas, Tomori, glasses-friend-kun, and the moe idol “Yusarin~”/fiery sister. Had this been all the story had, I probably would have enjoyed it much more. Frankly speaking, less characters = more time for others to shine, and in Charlotte‘s case – sparkle. I waltzed into Charlotte thinking, “Hey, we learned our lesson with Angel Beats! right?” Apparently not. But much like its angelic-battlefront predecessor, it only takes a three-minute cafeteria scene to score big with the heart.

On another note, boy, Maeda certainly prefers his supernatural teenagers “paying the price for being special,” eh? You’ll explore that with Yuu Otosaka and his unsteady mental rise and decline. Charlotte doesn’t sugarcoat depression, and it’s scary good.

Smug as hell, but gosh, whom do you remind me of!?

Yuu no Rebellion. Geass, anyone?

P.A. Works puts on yet another flawless depiction of high-school livin’ on the animation front. It’s fluid, high-powered action scenes contrast with the gorgeous backdrop to create a very supernatural and off-putting vibe when it wants to. I always thought of P.A. Works as KyoAni’s older sister, showcasing maturity over cuteness yet still being very youthful. Character designs are attractive, comedic moments will make you laugh, and that signature P.A. Works sky is simply to die for!

The only disappointing scene from this department was the concert snippet we get. It wasn’t poorly animated, it was just so lackluster compared to its predecessor’s, which even gets a blatant reference when Otosaka is watching anime at a computer cafe. At least the story involving the ‘post-rock’ star was a touching one.

For soundtrack, what we get is . . . actually pretty nice. It’s apparently arranged by ANANT-GARDE EYES and Maeda himself, so make of that what you will. The feeling I get listening to these tracks is in fact similar to Angel Beat!‘s, but again, make of that what you will. Playful and relaxing, energetic and intense, grim and remorseful – It all blends in really well with the atmosphere.

“Bravely You” by Lia is our opening, and if I haven’t made enough comparisons to AB! by this point, then you’ve got to be blind . . . kinda like half of the cast (OHH, BURN). The song fairs particularly well, growing on me as the series progressed. What really got me was the animation sequence that pairs with it. Lia has always been good at breathing life with P.A. work’s visuals (or vice versa, rather), making them seem like they belong hand-in-hand; It’s not just a sketch set to a song, but a moving, breathing piece.

I held my opinion of the story until now because here’s where things get real messy, really fast. Charlotte is pretty much firing on all cylinders until we hit the last third portion of the series. Until now, we’ve been wasting time at school steadily chugging along, makin’ memories and enjoying ourselves with a memorable cast, but a second sudden PLOT TWIST throws everything into the shitter. Maeda must’ve gotten bored with the slice-of-life school romance and PLOT TWIST shot the anime down a rugged path looted with amnesia, sudden-death, insanity, identity disorder, the questioning of humanity and sin, and PLOT TWIST, time travel. Great. Fans are never going to live this down, are they? Granted, it handles these attributes immensely well, but the PACING is horrible – as if the situation wasn’t drastic enough – and then BAM, another PLOT TWIST. Charlotte fell of the map in the last leg of its race, and I won’t even mention the final episode – An episode so diverging and literal that it could’ve been the foundation for an entire series by itself. What the frick??? While I can’t say I was in love with Charlotte the entire time, I still give it props for knocking me off guard at least a dozen times. Its unpredictability matched with likable main characters, stellar animation, and a semi-linear plot is still enough to hold much emotional appeal. Charlotte was trying to accomplish way too much in such a short run, and it begs the question as to whether some of its PLOT TWISTS were even worth sacrificing a good batch of characters (Yuu’s journey was excellent, though). Entertaining? Oh God, hell yeah! Artistic? Meh, it felt like several great stories mashed together to create something pretty wicked. It could have taken many different directions, but instead Charlotte decided to swing us waaaaaay outta orbit, sprinkle on its character development, hammer the plot, then soar right back out until the very end . . . Kinda like a comet.

“Do you know the story of the geocentric model? Today, we know it’s complete nonsense, but it used to be accepted as common knowledge. However, reality did not agree. What do you think happened to the first person to ever question it? They were called a heretic, cast out, and stripped of all their power.” – Scientist Tsutsumiuchi *cough theme cough*

+ Emotionally gripping even when plot goes down the drain

– Plot pacing so horrible it hurt to breath

– Misplaced character focus (too many of them); glossed over vital characters

So that’s Charlotte. If y’all are scrounging for something unpredictable, here’s a winner. It’s a sweet “Cake” for me! Fans of P.A. Works should also get a kick out of it, despite its misleading direction. Lastly, consider watching if being critical isn’t your thing – it’ll at the very least keep you very entertained (watch me on Crunchyroll for FREE)! Did Charlotte mindf*ck you repeatedly until you didn’t even care anymore, or were you pleased with the end result? Let me know in the comments and we’ll chat! Also, I figured out how to put in videos thanks to the Otaku Judge and Rocco B!!:) Thank you for spending your time to visit little ol’ me, and until another review next year, this has been